The demand for releasing the prisoners comes after Iran released over 70,000 prisoners because of the coronavirus outbreak. 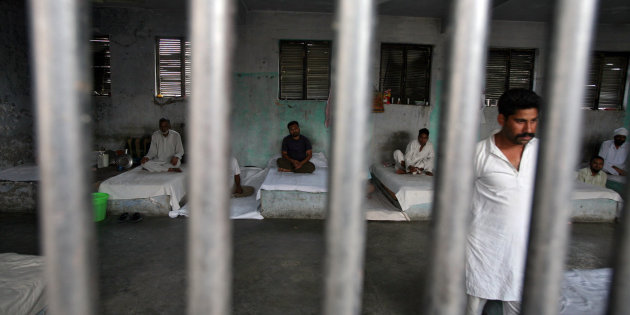 File photo of inmates resting behind bars in a barrack at Kotbhalwal central jail in Jammu, May 18, 2011. Credit: Reuters/Mukesh Gupta

Srinagar: The family members of Kashmiri prisoners who have been lodged in different jails across India since Article 370 was scrapped, have expressed concern in the wake of the coronavirus (COVID-19) outbreak that has gripped the entire world.

Human rights activists, advocates and families have demanded the immediate release of their kin on humanitarian grounds.

“The threat of the coronavirus epidemic increases the risk to their health and safety for political prisoners, who should never have been imprisoned in the first place,” said Michael Page, deputy Middle East director at Human Rights Watch.

Thousands of youth, political leaders and activists were detained when BJP-led government scrapped Article 370 of the Indian constitution that granted a special status to Jammu and Kashmir, bifurcating the state into two Union territories.

The demand for releasing the prisoners comes after Iran released over 70,000 prisoners because of the coronavirus outbreak.

“The government should have mercy on our kin now and release them on humanitarian grounds,” said 58-year-old Ateek Bano, whose son Faisal Aslam Mir is currently lodged in Ambedkar Nagar jail, in Uttar Pradesh.

Ateeka told The Wire that her anxiety grew after she came to know that the deadly virus is spreading in many states of India.

“It’s like a plague and it can reach anywhere, be it a jail,” she said, adding that the immune system of her son is weak and is vulnerable to any virus.

Faisal, who is a 30-year-old businessman and the lone bread earner of the family, was booked under the Public Safety Act (PSA), immediately after his arrest on August 5; Faisal was transferred to a prison in Uttar Pradesh, some 1200 km away from home.

The Public Safety Act (PSA), 1978, of Jammu and Kashmir is an administrative detention law that allows detention of any individual for up to two years without a trial or charge.

Due to poor financial conditions, Ateeka couldn’t afford to meet her son for the last seven months. But luckily, a court in Kashmir came to her rescue and ordered the Jammu and Kashmir Police to facilitate a video conference call with her son.

“My son is so weak and is suffering from back pain and different ailments. I couldn’t believe when I saw his face after seven months,” she said.

Begum’s son Asif Ahmad Khushoo, 22, was arrested on August 5 last year and booked under the repressive PSA and transferred to a jail in Agra, some 1,600 kilometres away from his home in Srinagar.

Asif was arrested on charges of stone-pelting and disturbing “public order”. Begum says now that everything is normal in Kashmir, the government should release the detainees without any further delay.

Zamrooda who usually visits the high court of the erstwhile state in Srinagar to follow her sons’ case says that the courts are teeming with parents of those detained in jails outside the state.

Hospital staff is seen outside the Special Isolation Ward set up to provide treatment to any suspected case of the coronavirus (CoV) at the Rajiv Gandhi Government General Hospital, in Chennai, Tuesday, January 28, 2020. Photo: PTI

“They are demanding the immediate release of prisoners. I told a judge that the virus is spreading in India like wildfire so this is the best time that men should be released and brought back to Kashmir,” she said.

According to her, they are planning to hold a demonstration outside the high court to press the government regarding the release of the prisoners in the wake of the outbreak. “Indian authorities should facilitate the release of all prisoners,” Zamrooda demanded.

Families of other prisoners echoed similar concerns and said that they were concerned about their kids in detention.

“We know what the conditions of jails in India are – unhygienic conditions with poor medical facilities. Our loved ones have every chance to get infected,” said Nazir Ahmad Khan, who son Momin Nazir Khan is currently lodged in Ambedkar Nagar in Uttar Pradesh.

Nazir Ahmad Khan’s son was detained on August 6, 2019, under PSA on the charges of stone-pelting and then lodged in the UP jail.

It must be noted that jails in India continue to remain overcrowded. The situation in UP, where most of Kashmir prisoners are currently lodged, according to a report is worse.

President Doctors Association Kashmir (DAK) Dr Nisar-ul-Hassan told The Wire when any virus is in the community and people are in crowded places, there is every chance of people getting infected in large numbers.

“So we have to avoid gatherings and places like jails with more than a dozen people inside. So they need to be isolated,” he said adding that poor unhygienic conditions inside jails can prove to be fatal in these times.

Parvaiz Imroz, a Kashmiri human rights defender, believes that the current scenario may take a toll on the mental health of Kashmiri prisoners.

“First they are lodged in faraway jails and now as the virus is spreading in many states, it might take a toll on their mental health, so the government should at least shift them back to Kashmir,” Imroz told The Wire adding that if Iran could temporarily release prisoners why couldn’t India take a call.

Over seven months have passed since the government revoked the special status of the state. Hundreds of people are still behind bars. Although, the government has recently revoked PSA charges of many people including a member of parliament and former chief minister Farooq Abdullah.

As reports suggest, more than 5,000 people had been detained since the lockdown was imposed across the region.

Scores of families whose children have been detained since August last year have been unable to meet them due to their poor economic conditions which were intensified after the lockdown.

Also read: Coronavirus in India: What Exactly Has Happened, What Needs to and What You Can Do

While several political leaders have been released since, youths booked under the PSA continue to be lodged in jails thousands of kilometres away from home. The government claims to have detained 444 people under the PSA since August 5, out of which 389 are still behind bars.

A recent report by prominent Human Rights groups reveals that nearly 37.4% of detainees in PSA related cases have been shifted to jails in various states across India.

The COVID-19 outbreak originated in a wet market in China’s Wuhan district in December last year and has, so far, killed more than 5,000 people while infecting 100,000 more.

The World Health Organisation has declared the novel coronavirus a pandemic, signifying its worldwide spread.

With two deaths and a total number of 81 confirmed cases of the novel coronavirus reported in India, a health ministry official has said that a further 4,000 potential cases had been identified through contract tracing and were being tracked.

To contain the spread of COVID-19, several states across India were shutting down schools, theatres and colleges, and many public events, including the IPL, have been postponed.