'I Am More Afraid Than I Have Ever Been': A Personal Account From Kashmir

"Now I know there is no place for a Kashmiri Muslim anywhere – we carry a dual baggage that nobody has the heart or will to accommodate or welcome." 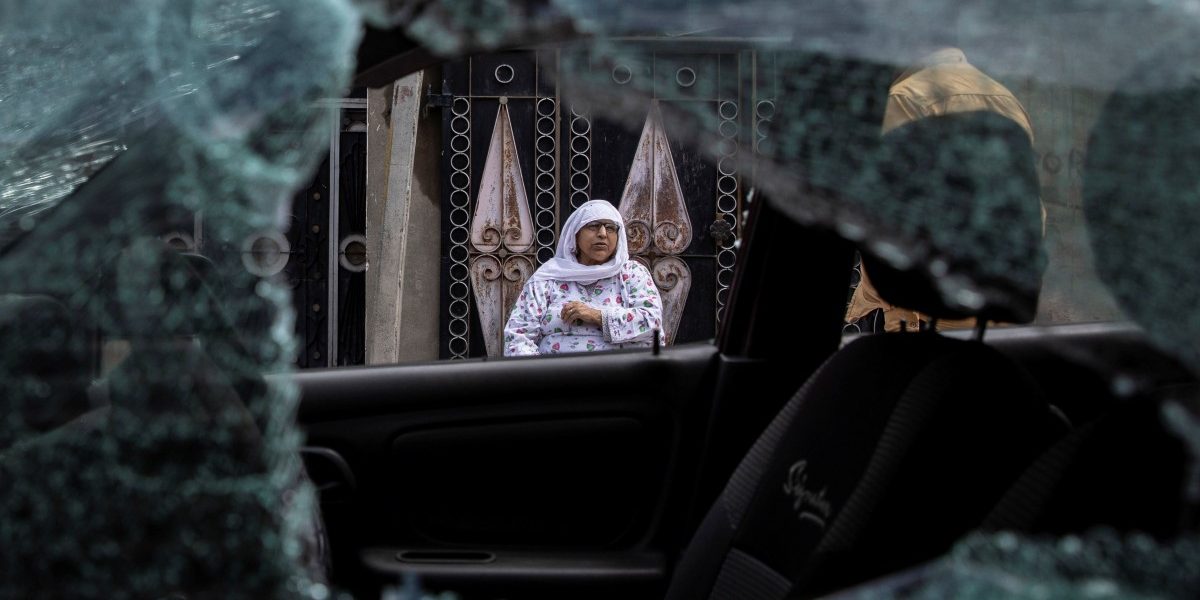 A woman, whose family car was allegedly damaged by security forces after clashes with protesters, sits outside her house in Srinagar, August 10, 2019. Photo: Reuters/Danish Siddiqui

“I would like to write one of those sophisticated stories in which even though nothing happens, there’s lots to write about. That can’t be done in Kashmir. It’s not sophisticated, what happens here. There’s too much blood for good literature.”
~ Arundhati Roy, The Ministry for Utmost Happiness

Two weekends ago, my WhatsApp was flooded with rumours stating our phones and internet are going to be cut off. That something drastic was going to happen, potentially a war, so we should stock up food. This was followed by instructions not to take these rumours seriously – that they were spread by miscreants who enjoy chaos. We also heard of a notice instructing all tourists to vacate Kashmir immediately. As if the tourism here was already booming.

Monday morning when I woke up, the first thing I felt was the air. It was not normal – there was an ambiguous stench, a combination of terror, fear and blood. I am not exaggerating – the air here feels different. One needs to live here to understand these nuances. I checked my phone and realised everything we had been told not to pay heed to had come true.

Our phone calls, text messages and internet were barred, and we couldn’t contact anyone or visit them. This is the 21st century, and our government, which claimed we were an integral part of India, chose to decide things for us, and silenced us. It was forcing us to spend our days in worry and anxiety, the breadth of which ranges from worrying about our homeland to the condition of all those we love.

Over the course of the day, I head several things that were happening which we had no way to confirm. Our news channels were cut off; our phones were not working. By evening, we got to know that Bills revoking Article 35A and 370 of our constitution, which granted special status to Jammu and Kashmir, had been introduced, voted for and decided on in a day in parliament.

I recognised the stench of that morning – doom. It was not war they were preparing for, though that might have been better. They brought us under the direct control of the Centre, when they had already been controlling us through military occupation. (This is the largest democracy in the world – joy.)

I knew the people would not take this lightly. To change the mood, my uncle asks me if we bought goats for qurbaani on Eid. I say, “Hum toh qurbaan hi ho gaye, ab aage kya karien?(We are already sacrificed – what else is left to do?)”

We were under curfew, and there was an eerie silence that wails in war-torn places. No shops were open – we had no means to buy essential commodities including food and medicine. It was the week of Eid-ul-Adha, one of our biggest festivals. The eternal hoping heart I have, I told my family that they would relax restrictions on Eid. They reply, “Yeli ni teman sean parwah che, saani Eenz hinz kya aasi? (When they don’t care for us as a people, why would they care for our joy?)” Hope is no match for that kind of truth.

My helper Faraz*, who hails from Kupwara (one of the most volatile places in Kashmir) hasn’t seen his family for a week. He tells me listlessly that his wife had no money on her and has three children to feed. The men in my family pace the room endlessly – there is nothing to do. It make me think of young boys and girls captured in their houses, with gunshots for background music, life and youth rotting away. No wonder drug abuse and PTSD among other mental health disorders are here in abundance – what else can you grow here? They have and continue to rob us of our identity, of self esteem, or of our minds and our faculty to think and feel normally.

Friday arrives and so does dread. I go to my grandmother’s house to watch the news. A prominent Indian news channel claims normalcy in the Valley and peaceful occurrence of Friday prayers. I am enraged. All I heard in my Mohalla were slogans of “Hum kya chahte? Azadi!” and “Naara e taqbeer, allah hu akbar” being chanted in the mosque after the Friday namaaz. I can hear the protests. I can hear the gunshots. 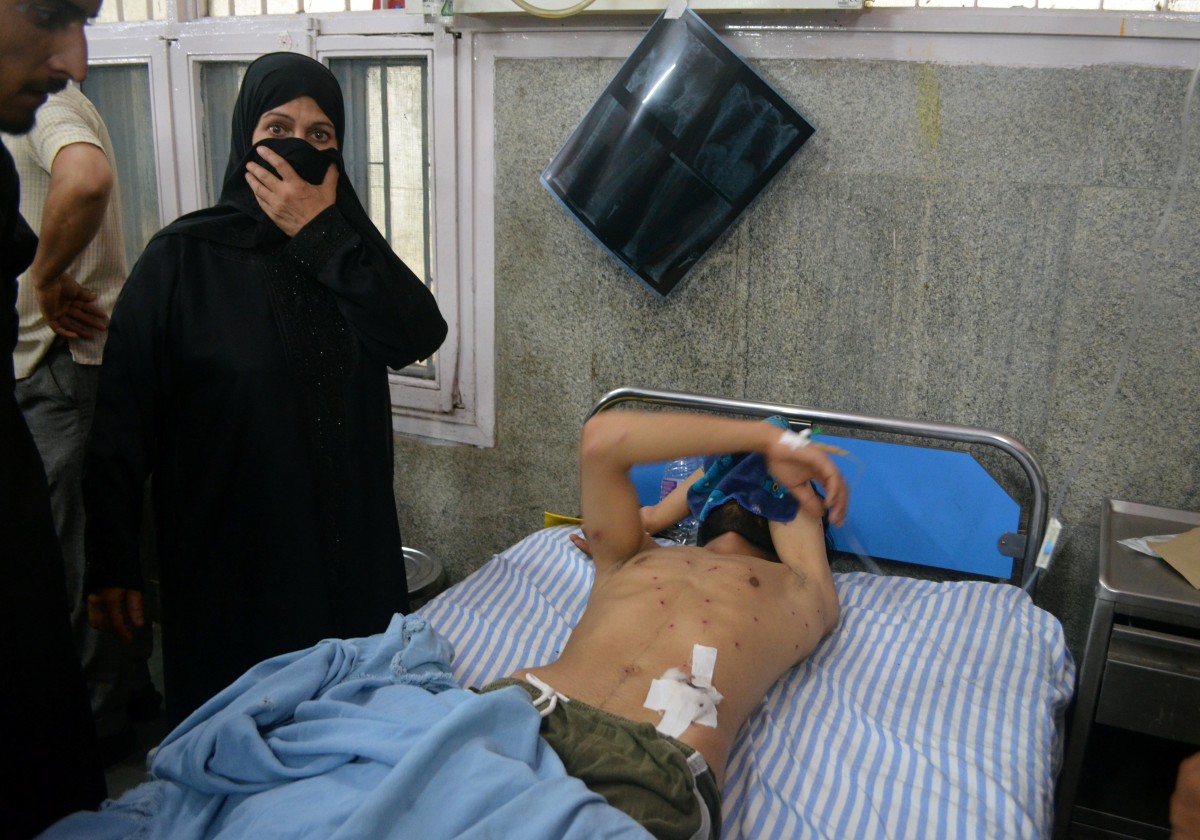 A man with pellet injuries lies in a hospital bed after he was injured during clashes between the police and protesters during restrictions after the government scrapped special status for Kashmir, in Srinagar August 9, 2019. Photo: Reuters/Stringer

None of this is being covered by the media – they are deliberately interviewing people living in peaceful areas. The rest of the country is being given a rosy picture of what we are going through while we burn. What actually happens in Kashmir, what its people know and what the rest of the country knows are entirely different things.

Last evening, Faraz went to purchase mutton for Eid, so that for one day we could take a break and pretend there was still an iota of normalcy. He told us that the butcher, who had opened his shop late in the evening, was raided by young men and attacked for opening his shop when things were so dire.

At first I was furious – why couldn’t these men let us make merry for one day.

Faraz said that these men told the butcher, “Che chukka shaahedan hyund khoon kinaan? (Are you selling the blood of martyrs?)”

We were all complicit in this. You cannot make merry in a land running red with the blood of its people, where dying is a way of being alive.

People’s grit and fury shook me – they are going out on the streets to reclaim their home, with reckless abandon and no fear for their lives. And once that fear has gone, what use is the largest or second largest army in the world? There is an aching hope that maybe this mad angst can rule over tyranny and free us of this torment.

On the day before Eid, we usually celebrate in preparation for the festival with our hearts filled with joy. We were told restrictions would be relaxed on Sunday, but then the news came that the curfew had been re-imposed, with no explanation or reasons.

In my 24 years, I have never seen an Eid this heart-breaking. Everyone is distracted, uninvolved, anxious and unhappy. I don’t know if the phone lines will be open to wish our loved ones.

To top it all, rumours say the situation is going to worsen after Eid. August 15 has been volatile in Kashmir for years, and in light of recent events, I cannot even imagine what lies in store for us. I am more afraid than I have ever been. Possibly, because earlier, no matter how charged a situation was, a Kashmiri was at home in her homeland. Now I know there is no place for a Kashmiri Muslim anywhere – we carry a dual baggage that nobody has the heart or will to accommodate or welcome.

This piece was filed by SMS and has light edits for clarity. Normal movement and communications have yet to be restored in the Valley.

Qurat ul Ain has completed her masters in clinical psychology and aims to practice psychotherapy in her hometown, Kashmir.