Kasganj Custodial Death: Fighting Back Is Our Only Hope, Says Altaf’s Family

The family is currently demanding an independent probe by the CBI into the matter. Kasganj (Uttar Pradesh): “The media is here, the politicians are here, all of the promises are here, but there is no justice for my son,” says Fatima, the mother of 22-year-old Altaf, who died in police custody.

In the narrow lanes of Ahirauli, a small village of Kasganj district, scores of politicians and media persons throng Altaf’s house. His father, sick from trauma, is lying on a bed coughing. “I will not let my voice break, this is the only way.” He explains, “I had handed my son over to the police with full faith, I did not know that the very next day we would have to find him dead. They have murdered my son, our only hope is to keep fighting.”

Altaf was taken into custody on suspicion of his alleged involvement with a minor girl. The girl’s family, living in Lalpur where Altaf fixed tiles, had alleged that the two were in a relationship and Altaf had played a part in kidnapping the minor. The Kasganj police had filed a case against Altaf under Sections 363 and 366 of the Indian Penal code.

“My son was a bright boy, he was extremely reserved, we cannot believe that he would kidnap anyone. If he had kidnapped her, why would he be at his house? We were not allowed to meet him, when the police informed us of his death, they immediately wanted me to sign a letter saying I was in trauma. I felt pressured to sign whatever was asked of me, all we want is justice for our son.” 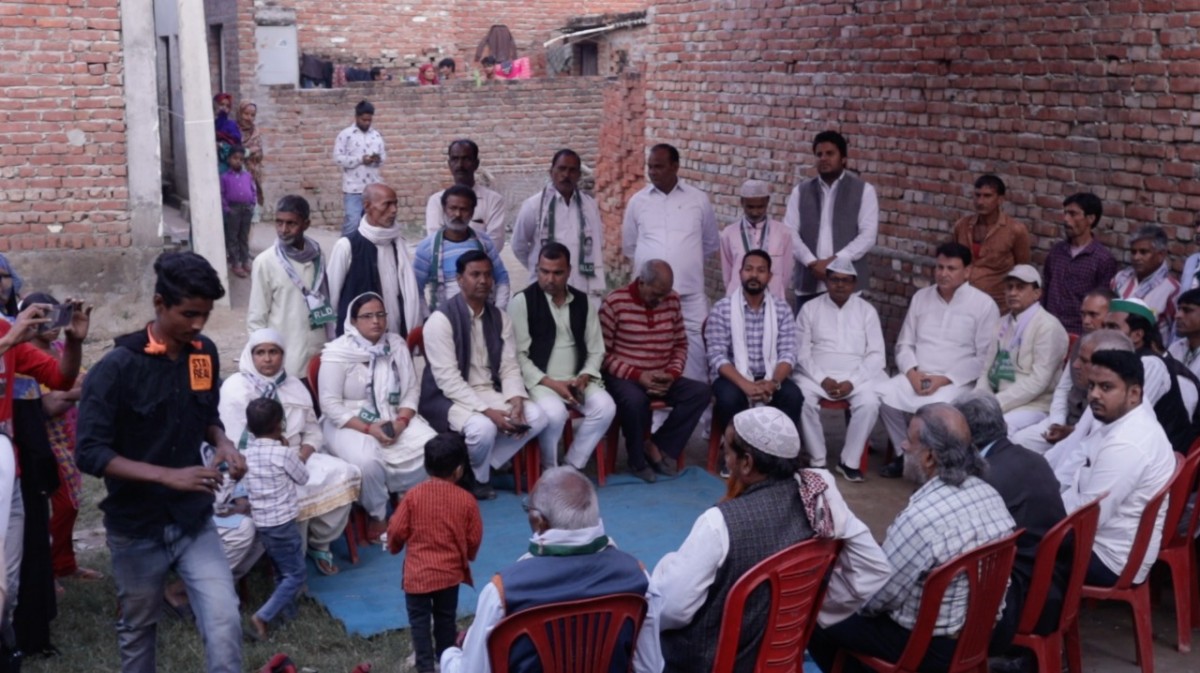 Politicians and others gathered outside Altaf’s house. Photo: The Wire

The family is currently demanding an independent probe by the CBI into the matter. While the Uttar Pradesh government has announced the initiation of magisterial inquiry into the death, many questions remain.

Speaking to The Wire, Altaf’s aunt Mubina says, “How can a boy, who was weighing 50-60 kg and above five feet tall, kill himself by tying himself to a two feet plastic pipe? How can this be true? …we are not backing down until there is a fair probe.”

She adds, “The process of his death and his funeral was rushed by the police. With great difficulty we could do his last rites because the police did not want this news to get out.”

A letter had gone viral on social media as the news broke out, stating that Altaf was depressed and that the family did not have any complaints with the police. At the bottom of the letter was the signature of Altaf’s father Chahat Chand Miya. Mohd Shakir, a relative of Altaf ‘s, wrote this letter on Miya’s behalf since he cannot write. As the letter removed any accountability of the police, The Wire spoke to Shakir who wrote it.

“We were under pressure, I was not sure of what I was doing or of what was asked of me. Within an hour of Altaf’s death, we were summoned to the police station by a mediator, Dr Farookh, and a police officer whose name and designation I did not see had asked me to write this letter. As I wrote those words, my heart and my conscience were not in sync, but I felt like I had no choice.” 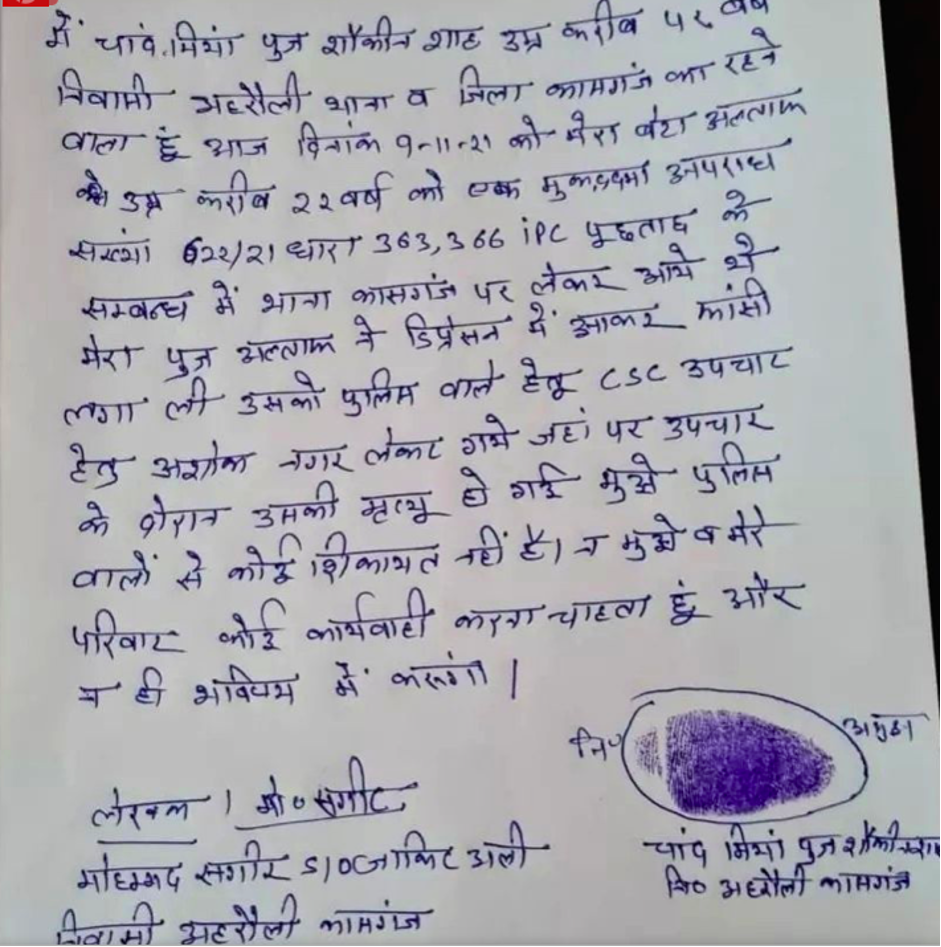 The letter Mohd Shakir says he was forced to write. Photo: The Wire

The family has also alleged that Altaf’s post-mortem report has not yet been handed over to them. While the police has currently released an amount of Rs 5 lakh as immediate relief to the family and the Samajwadi Party giving out another Rs 5 lakh, the family asks – is this the value of a young man’s life?

Mubina adds, “As if money could mend our heart. I am ready to pay twice as much if my boy comes back, Altaf was the sole bread earner of this family, he was our strength, he was someone who kept us all together. We do not want their money, we want justice.” 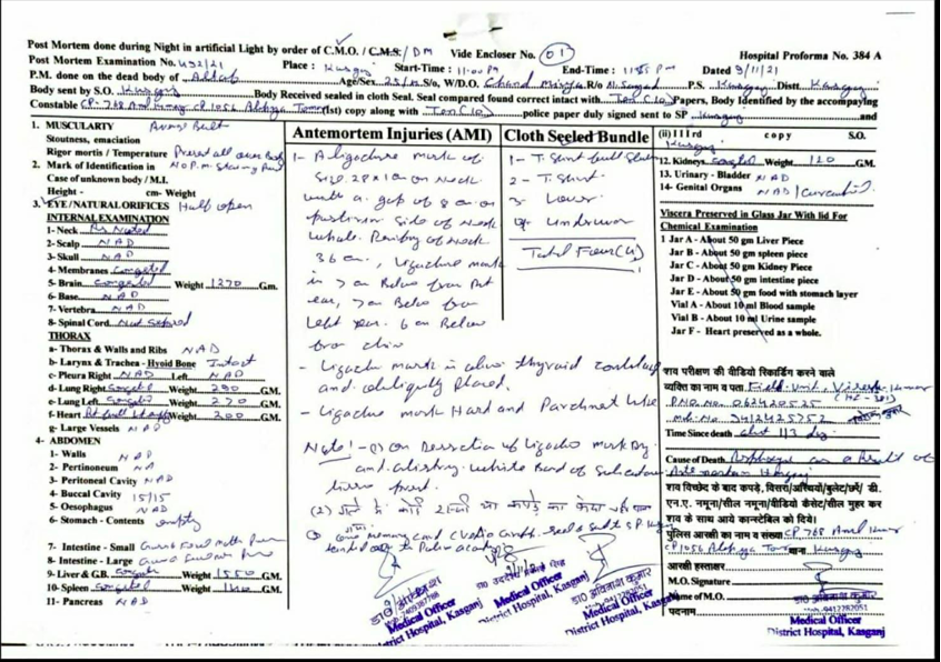 The post-mortem report. Photo: The Wire

Meanwhile, the Kasganj police has released an infographic showing different types of hanging in a bid to support their version of the death. The police have maintained that Altaf was found tied to the drawstring of his hoodie in the washroom, gasping for air, post which he was given medical attention. The police have also pointed out that that the post mortem report lists asphyxia or death due to choking as the cause of Altaf’s death.

Superintendent of Police Rohan Botre met with The Wire to answer questions surrounding the police’s version. When asked how the hanging was possible, he said, “There are different ways in which a person could choke and we have pointed out as to how we found him gasping, as far as the question of the post mortem is concerned it is out in the public domain for everyone to see, we have ordered an enquiry in the case and we have admitted negligence and suspended officers in connection with not following protocol.”

He went on to add, “We are appealing to the family to come forth and file an FIR with us so that this can be taken up and we are open to their application.” Botre also admitted that the media access to the crime scene and the videos doing rounds on social media were problematic and amounted to negligence on the part of the police.

Taking suo motu cognisance of Altaf’s custodial death, the National Commission for Minorities has sought a report within 15 days from the state director general of police and chief secretary on action taken.

Meanwhile, the opposition parties are mounting pressure on the BJP ahead of the Uttar Pradesh polls to come out and clarify their stance. However, no official spokesperson of the BJP has spoken up about the issue from either the state or the party. Uttar Pradesh tops the ranks when it comes to data on custodial deaths in India. According to the National Human Rights Commission, a total of 1,067 people died in custody in the first five months of 2021, raising critical questions on the state of police and law and order in India.