As Symbols of Discrimination Fall Worldwide, Meet the Women Who Blackened Manu's Statue

To protest the discriminatory laws of the Manusmriti, Kantabai Ahire and Sheela Pawar blackened the statue of its mythical author located in the Rajasthan high court's premises. Two years on, they continue to face criminal charges. 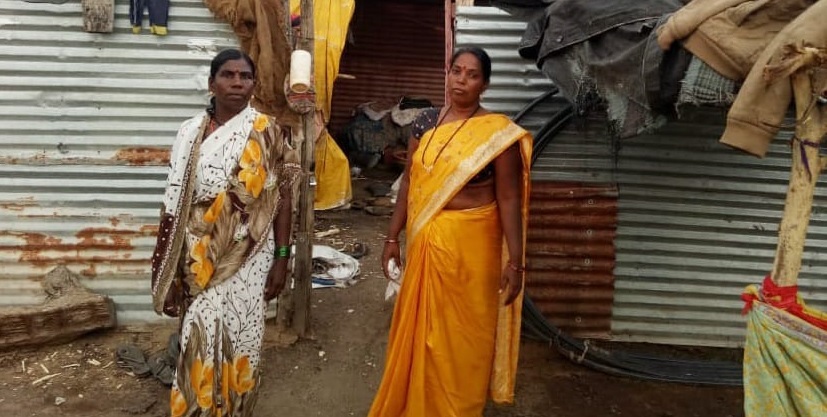 Mumbai: On August 10, 2018, a group of men, mostly Brahmins, had gathered at Parliament Street in Delhi and shouted slogans against Dr B.R. Ambedkar. Their organisations, the Youth Equality Foundation (Azad Sena) and Arakshan Virodhi Party, which have a history of casteist, anti-reservation agitation, had decided to display their hatred towards Ambedkar and the reservation policy by publicly burning a copy of the Constitution of India. The entire act was recorded and circulated across different social media platforms.

Over 1,250 kilometres away, in Aurangabad district of Maharashtra, a 40-year-old Dalit woman, Kantabai Ahire, watched this horror unfold. The sight of the constitution being burnt had left her deeply disturbed and she decided to publicly mark her protest. Ahire, a district president of one of the factions of the Republican Party of India called ‘RPI-Kharat’, led by political activist Sachin Kharat, decided that the only way to counter this was to attack the very source of this “abhorrent act”.

Elaborate planning followed for nearly two months, and on October 8, Ahire, along with party workers, 42-year-old Sheela Pawar and 33-year-old Mohammad Abdul Shaikh Dawood, travelled to the Jaipur bench of the Rajasthan high court. The original plan was to protest right in front of the statue of Manu and submit a memorandum to the court registrar demanding the removal of the statue. Manu, a mythical figure, is believed to be the author of the Manusmriti and its laws on maintaining caste and gender hierarchy.

But when they reached the court, the women decided to change their plan.

Both women, draped in sarees, climbed up the statue of Manu and smeared black paint over it. Dawood, befuddled, stood there in awe of their sheer audacity.

Their act of protest landed the two women in prison for over two weeks. Dawood, who had somehow managed to escape from the site, was arrested a few days later. Eventually, all three were released on bail. The case has since dragged on.

The statue of Manu outside the Rajasthan high court. Photo: Awadhesh Akodiya/The Wire

Ahire and Pawar’s act of defacing Manu’s statue was an extraordinary one in India, but this style of protest has many commonalities with the way anti-racism and anti-police brutality protests have erupted from time to time in different parts of the world. In December 2018, contending that Mohandas Karamchand Gandhi was racist in his attitude towards Africans, students of the University of Ghana removed his statue from their campus.

More recently, following the killing of 46-year-old African-American man George Floyd by white policeman Derek Chauvin in Minneapolis in the US, the statues of several Confederate leaders that symbolise the racist legacy of the country have been blackened or taken down. Similar protests are building up in other countries in the UK and Europe, where statues of slave traders and leaders who represent the brutal history of colonialism are being taken down.

Also Read: The Taking Down of the Colston Statue Should Make Indians Confront Our Own Past and Present

‘Happy that the oppressed stand united’

Back in India, sitting in her humble, one-room house in the Shambhu Nagar slum of Aurangabad, Ahire, says that globally, the oppressed have always found a way to build solidarity. “My heart is gladdened to see the oppressed stand united and respond to their oppressors so strongly and in such clear terms,” she says. Ahire has been closely following the news about the anti-racism protests in the US and different parts of the world. 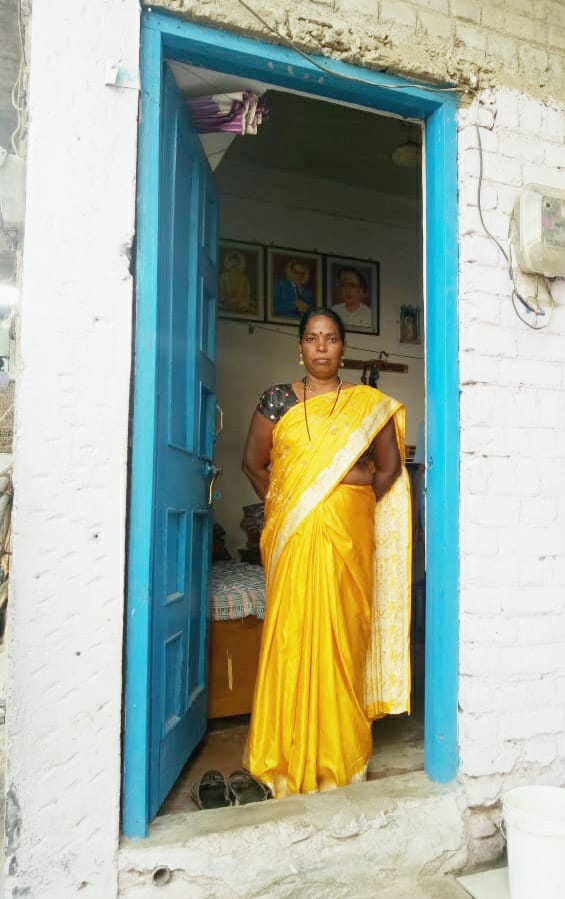 A staunch Ambedkarite, Ahire lives with her daily-wager husband and a teenage daughter. Their family has been struggling to make ends meet but that has not deterred her from being actively involved in social issues.

Pawar too has had it difficult. A landless woman from the Banjara denotified tribe, she has been doing odd jobs, toiling on the farms of upper caste persons or at construction sites for her survival. Even a mobile phone is a luxury, they say. This reporter was able to speak to them over the phone only after Gunratna Sonawane, an Aurangabad-based student rights and anti-caste activist, was able to locate them and arranged an interview.

While Ahire studied until Class XII, Pawar is unlettered. Both say that their life experiences and grassroots activism have taught them about Ambedkar and his anti-caste legacy.

Ahire is Pawar’s senior in political activism and the two have worked in sync for many years, participating in several protests and countering the Hindutva agenda of the Bhartiya Janata Party (BJP) and Rashtriya Swayamsevak Sangh (RSS) in Aurangabad district.

In 2017, when former Union minister and BJP MP Anantkumar Hegde had criticised the term “secularism” and said the word should be dropped from the preamble of the constitution, the duo along with other activists of the RPI-Kharat group had protested and attacked the BJP and RSS’s offices in Aurangabad.

Now as social media buzzes with updates from the protests in the US and the felling of statues of Confederate leaders, Ahire recalls her experience of travelling to the Rajasthan high court. “It was a strange feeling. We knew our protest would have been ignored if we simply stood there. We also knew, if not for us, those men (who burnt the copy of the constitution in Delhi) would have gone unchallenged. So we took that plunge,” Ahire says. “It is Manu’s kaayda (law) that caste Hindus, primarily the Brahmins and savarnas, continue to follow to date. With that simple act, we had managed to smear that very belief black,” Pawar adds. 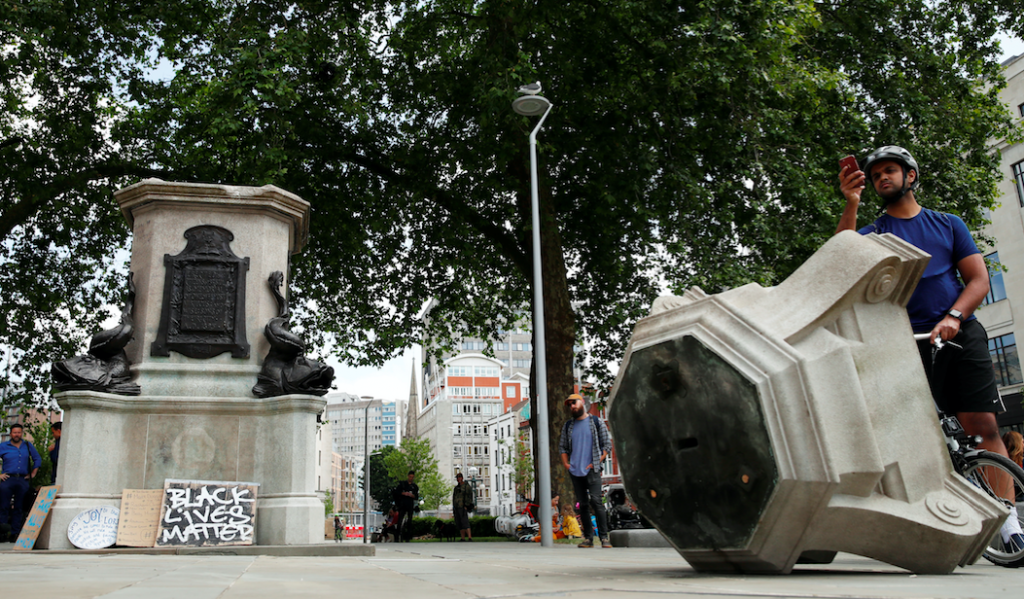 A man observes the base of the statue of Edward Colston, after protesters pulled it down and pushed into the docks, in Bristol, Britain, June 8, 2020. Photo: Reuters/Matthew Childs

If it was the burning of the constitution in Delhi that they were protesting, then why did they choose Rajasthan as their site of protest? “Hindu mythology believes that Manu was the author of Manusmriti and he had lawfully sanctioned the degradation of humanity on the basis of caste and gender. He had laid down regressive laws for the shudras, and the ati-shudras and women. That fictitious figure still gets legitimacy in contemporary India. And what is most shocking is [his statue] is installed in the high court’s premises,” Ahire answers. More so, Ahire says, they were only following “Dr Ambedkar’s principles”.

On December 25, 1927, during the historical campaign for the right to access to water from the Chawdar tank in Nashik, Maharashtra, Ambedkar had organised a “conference for untouchables”. At the conference, he had burnt a copy of the Manusmriti as a sign of revolt against Brahminism. Since then, every year, several anti-caste groups celebrate the day as ‘Manusmriti Dahan Divas’ and burn copies of the book.

Inside the Rajasthan high court premises, in the garden area, however, stands a 10-feet tall statue of Manu. The statue, built in 1989 by the Rajasthan Judicial Officers Association and funded by the Lions Club, has been a major cause of discontent for years. For three decades, anti-caste activists have criticised the installation and have questioned the judiciary for allowing the presence of a mythical figure who authored laws that run contrary to the constitution inside the court premises.

Even so, the duo’s protest was brave. This act of daubing a powerful symbol of Hinduism had riled many Brahmins in the legal fraternity of Rajasthan. The women were gheraoed and overpowered by a mob of caste Hindu, male lawyers. In a video that went viral, the lawyers could be heard asking why they blackened the statue. When the women replied that Manu denoted Brahminism, some men promptly announced their own Brahmin caste identities and asked the women if they would blacken their faces too.

Over the past three decades, several anti-caste groups have criticised both the Rajasthan state government and the judiciary for being “Brahminical” by allowing an icon of casteism to remain in the court premises.

Also Read: The Trigger Behind the Defacing of the ‘Disputed’ Manu Statue at Rajasthan HC

As soon as the statue was set up in 1989, a huge agitation was sparked in the state. Due to objections raised in the full court meeting of the Rajasthan high court, it was decided that the statue would be relocated, away from the court. But this order was challenged by Jaipur-based VHP leader Acharya Dharmendra.

The case has time and again been brought before the court’s bar association and on August 13, 2015, the matter was taken up in the high court after a period of 25 years. Several anti-caste organisations have intervened in the matter. Each time the lawyers tried to argue the matter from an anti-caste perspective, a mob of Brahmin lawyers has protested and heckled them in the court. A division bench of Chief Justice Sunil Ambwani, Ajit Singh and V.S. Siradhana, hearing the matter then, had issued notices to the Centre and state government, impleading them as respondents to the petition. The matter has since been pending before the high court.

Many of the laws in Manusmriti run contrary to the principle of justice and equality enshrined in the Constitution of India.

There is no evidence to back the claim that Manu ever really existed. But caste Hindus believe that Manu had authored the Manusmriti, also known as ‘laws of Manu’, which laid down regressive laws for shudras, ati- shudras and women. These smritis – believed to have been composed somewhere between 200 BCE and 1000 CE – sanctioned different rules and punishments on the basis of caste. Many, like these two women, have argued that to have a symbol of something so inherently unequal in the high court’s premises is inherently against the principles of justice and equality.

Nearly two years after the incident, the women continue to face criminal charges. When the case was registered, several anti-caste groups and human rights lawyers had come forward to help them. But the duo had to raise funds for their release from jail and for subsequent court hearings. “When we were arrested, the BJP ruled both Rajasthan and Maharashtra. Now in both states, they have been replaced by the Congress. We hope the present state dispensations are considerate and will drop the charges against us,” Ahire says.