Never convicted, but jailed on 'Naxal' connection charges since 2014, Kanchan Nanaware died last year. Her husband Arun Bhelke has moved court, alleging that her death was the result of severe negligence by prison authorities. 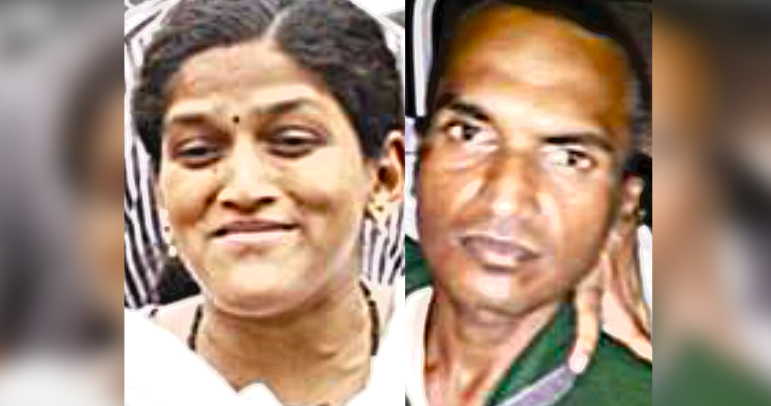 Mumbai: Thirty-eight-year-old Kanchan Nanaware and her husband Arun Bhelke, both arrested in 2014 for their alleged role in Naxal activities, were lodged at the same Yerwada central prison when Nanaware was suddenly taken for brain surgery on January 16 last year.

But Bhelke, only a few metres away from Nanaware and kept in the same premises, was not informed about the surgery. Nor was his consent taken. The jail superintendent, claiming that “no near relatives are available to give consent,” had signed off on the surgery papers.

This surgery led to further complications and Nanaware suffered a cardiac failure. Bhelke was still not informed. Finally, when a few co-prisoners found out about her critical state, they passed on the information to Bhelke. It was January 18 by the time he found out. He had to move court to meet Nanaware and the process took another five days. On January 23, he finally got to see her in Pune’s Sassoon hospital. She was in a critical state, unable to recognise or speak to him. A day later, she died.

Nanaware, who was born with a congenital heart illness, was imprisoned along with Bhelke in 2014. She had already undergone two open-heart surgeries in 1996 and 2013 and her serious medical condition was known to both the prison (state authorities) and judiciary.

By 2020, her body function capacity had reduced to 40%. She had severe oedema (a condition where fluids collects in the body), which rendered her practically immobile. In 2020, after long hospital stays, doctors suggested she undergo a heart and lung transplant at a super-specialty hospital, without which her prognosis was declared to be poor. This suggestion was overlooked and jail authorities made no efforts to make a transplant facility available to her or to have her admitted into a super-specialty hospital for further treatment.

These clear and life-threatening challenges did not help her secure bail either. While her lawyers kept approaching the court and pushed for bail, the court repeatedly rejected her plea.

Nanaware belonged to the Adivasi community from the Vidarbha region in Maharashtra. Bhelke is from a Dalit community.

Immediately after her death, prison officials tried to pass it off as the result of existing medical ailments. But a year later, Bhelke, through his lawyers, has found out that prison officials had, in fact, falsely signed on consent papers and kept him in the dark all through.

Bhelke has moved a criminal writ petition before the Bombay high court, seeking detailed investigation in Nanaware’s death, scrutiny of the medical and prison officials involved in her surgery which caused her eventual death, and also access to all her medical papers.

A division bench of Justice Prasanna Varale and Surendra Tavade heard the plea last week and issued notice to the Additional Director General of Police (Prisons) and the Jail Superintendent of Yerwada Central Prison. Bhelke was represented by senior counsel Gayatri Singh.

The state authorities, after her death, had sent a letter to the chief magistrate of the Pune court to conduct a judicial inquiry as prescribed under Section 176 (1A) of the Code of Criminal Procedure (CrPC). But strangely, no one including the medical staff who treated Nanaware, Bhelke or her relatives has yet been called for examination. In his petition, Bhelke has sought access to documents, if any, relating to the judicial inquiry that the state claims to have initiated.

Along with a judicial inquiry, Bhelke, in his petition has also sought detailed guidelines for treatment of seriously ill prisoners and compensation of Rs 50 lakh for the alleged negligence.

Judicial inquires, considered as the only way to bring out truth in cases of citizens dying in police and judicial custody, are mandated both legally and by the National Human Rights Commission on many occasions. But most states have completely disregarded this mandatory procedure and in cases where it is followed, it is mostly only on papers.

In those six years that Nanaware had spent in Pune prison, she faced trial in nine cases. Of those, she was already acquitted in six. The three other cases – one each in Gadchiroli, Pune and Gondiya – were still pending at the time of her death.

As mentioned before Nanaware – who had not been convicted under a single charge against her – was repeatedly denied bail by the court. This delay led to deterioration of her already serious illness. Bhelke too is an undertrial, who has spent close to seven years in jail without a single conviction.

Parth Shah, her lawyer, says the prison officials blocked Nanaware’s access to her husband and took decisions on her and his behalf. This, Shah says, was done even as the high court was hearing the bail application that was moved on medical grounds. The high court-constituted committee had concluded that due to her chronic heart condition, all her other organs would weaken. The lack of heart and lung transplant, as advised, eventually ended up impacting her liver too.

Shah points to the September 25, 2020 order of the high court which recorded the “callous” attitude of prison authorities towards ailment of prisoners and Nanaware’s case, in particular.

This high court hearing was ongoing when prison authorities decided to proceed with the surgery. The court too, Shah points out, was not aware of the decision taken. “None of these developments were informed to the Bombay high court even though hearings in her bail application were going on at that time,” Shah says.

Both Nanaware and Bhelke were student activists. Despite her serious health condition, Nanaware remained active in people’s movements right from 2004 till the time she was arrested. Her friends and colleagues in the movement recall that she was one of the sharp voices participating in the farmers, Dalit and Adivasi communities’ struggle.

After Nanaware’s death, Bhelke once again had to move the court to be present at her final rites. Devastated after his partner’s death, Bhelke had tried to express his feelings in a letter. 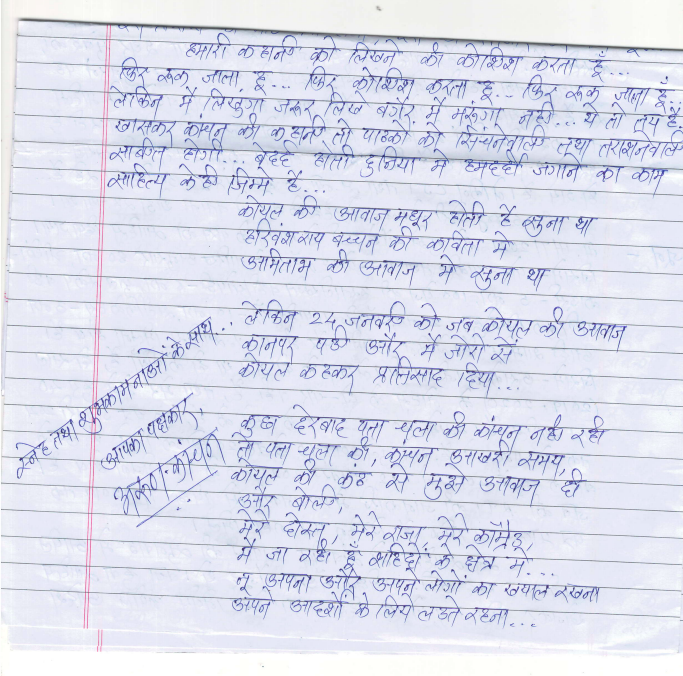 Arun Bhelke’s letter after the passing of his partner, Kanchan Nanaware.

On January 24, when Nanaware breathed her last, Bhelke writes that he heard a nightingale sing in the jail premises.

‘In her last breath, Kanchan spoke to me through a nightingale. She said, my dearest, my friend, my comrade, I am leaving…I am going to join other martyrs. Take care of yourself and your people. Keep fighting for your principles.’