Kalinganagar, Where 'Development' is Threatening a Way of Life

In the hot zone of Odisha's iron and steel belt, adivasis continue to resist the acquisition of fields and forests. 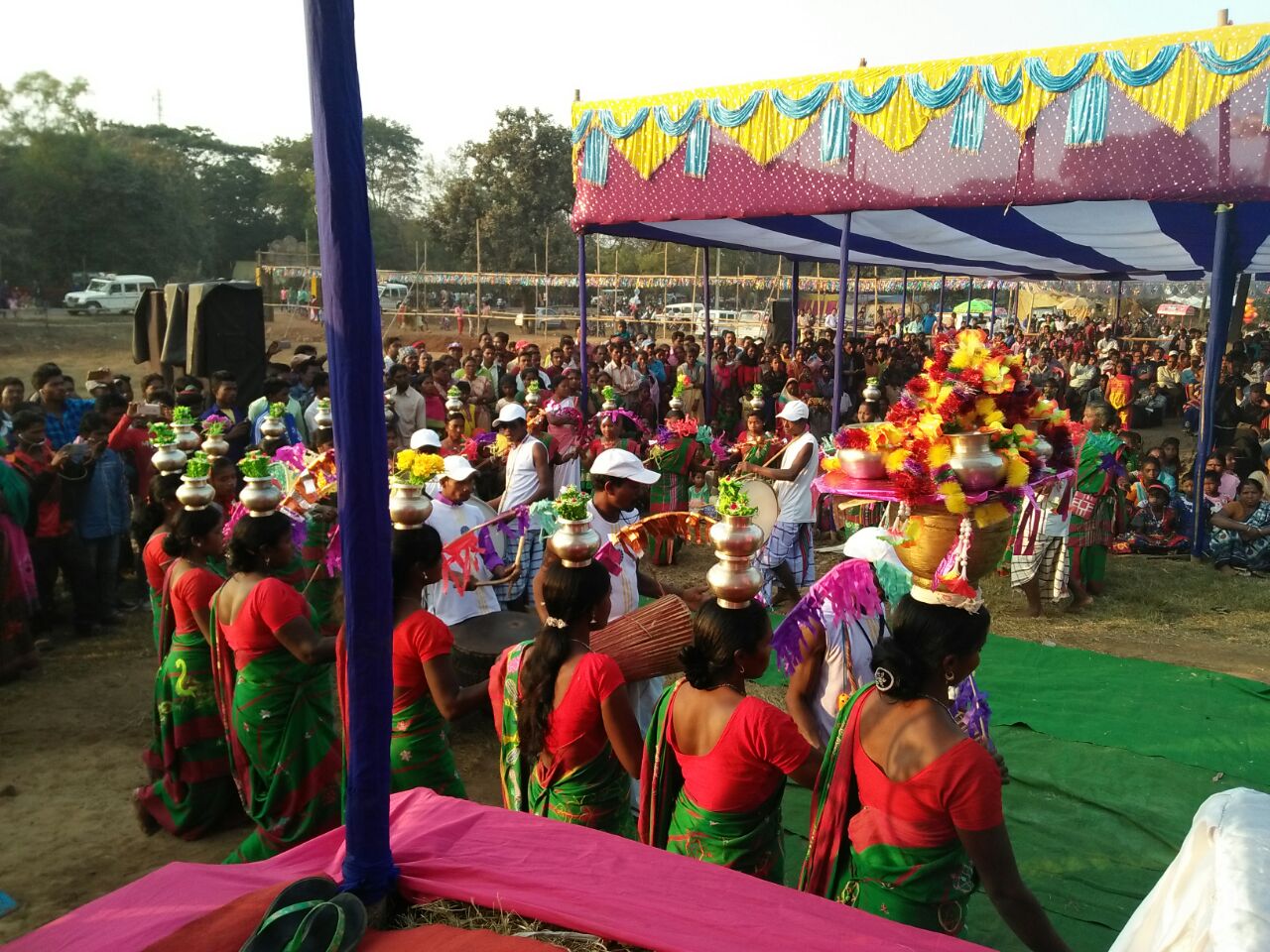 On January 2, people in Kalinganagar gathered once again at Beerbhumi – the memorial that commemorates the anniversary of the 2006 incident when the Odisha police opened fire on a gathering of villagers who had come to protest the construction of the boundary wall of a Tata Steel plant. Thirteen adivasis and a policeman were killed, sending shock waves across Odisha.

In the immediate aftermath of the 2006 police firing, the Bisthapan Birodhi Jan Manch had organised a road blockade on the national highway connecting Paradeep to Daitari and demanded immediate punitive action against the police and administration officials responsible for killings. The Manch decried the setting up of a judicial commission of inquiry as it suspected from the very beginning that it would simply go through the motions and rule in favour of the government. Predictably, the commission did precisely that.

On December 14, 2017, the Odisha government tabled the report of the P.K. Mohanty Commission of Inquiry set up to probe the police firing. The report has exonerated the police and administration involved in the crackdown.

First instituted on February 2, 2006, the manner in which this commission of inquiry has been handled and the long delays involved show the complete lack of political will.

The state government first appointed the Justice S.N. Naidu Commission, despite a Supreme Court order barring any sitting judge of a high court from heading a judicial inquiry [The government’s plea to the apex court to allow Justice Naidu to continue was turned down on April 6, 2007]. Hence, it was dissolved the following month.

Then another commission was constituted in January 2008 with Justice R.K. Patra as its head, which also had to be dissolved after he was appointed lokpal.

Finally, the Justice P.K. Mohanty Commission came into being, which formally submitted its report to the state government on July 3, 2015. The state government then took another two and a half years to table the report in the assembly.

In all, 11 years were needed for the state to conclude that the ‘quantum of force’ used during the agitation was justified in the face of a situation where about a thousand adivasis had assembled to thwart the construction of the boundary wall with lathis, axes, bows and arrows, which, in the commission’s learned opinion, were ‘deadly weapons. And that the 12 platoons of police deployed with modern arms and ammunitions had to resort to ‘self-defence’ as the protestors became aggressive.

The commission acknowledges the ‘discontent’ that was brewing among local people about compensation rates. However, nobody from the authorities – district or state level – had deemed it fit to enter into any negotiations with the protestors.

Between then and now

While the commission was doing its work all these years, the process of land acquisition was not halted. Although, 800 of the 1,300 families had been shifted by the end of 2009, some of the villages continued to resist. It was an unequal fight. The construction of a ‘common corridor’ was used as a ruse; it took many platoons of police to uproot the remaining families of Chandia, Bamrigotho, Kalamatia and Baiduburi.

Laxman Jamuda of Chandia succumbed to police bullets on May 12, 2010. A pillar has been added at the memorial site in his memory.

The land on which adivasis were living for centuries was being taken away by the state with the promise of the benefits of development that would come along and transform their lives. They were also promised at least one job in a family. Factories came up, mining began, but the transformation in the lives of the people remained elusive; instead, what they began witnessing was destruction of the environment around them.

To find out what else had been happening to the land and its people, we visited the area in August this year after the state government’s clean chit to the police and administration was announced. 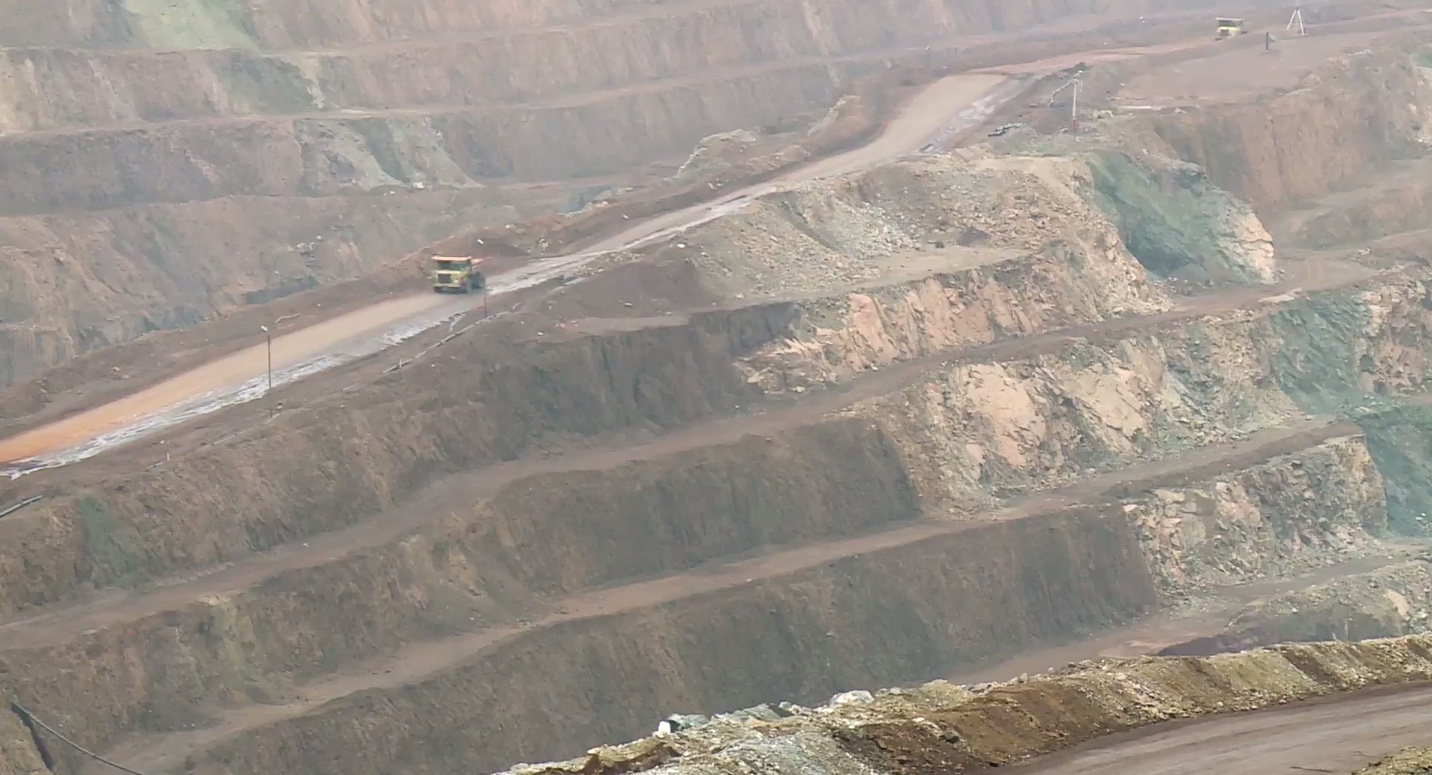 A view of mining operations at Sukinda, Kalinganagar. Credit: YouTube

The Tata Steel plant is already operational and now is on its way to expand capacity from six to eight metric tonnes per annum. This means more land is required in an area whose ecology is already fragile and whose people continue to oppose being displaced.

In fact, the drive from Bhubaneshwar to Kalinganagar is a surreal experience. As soon as you move away from the limits of the capital city, there is a long expanse of rich green paddy fields dotted by hillocks with the landscape exuding a vibrant green. When you turn left at Chandikhol, you cross a bridge from under which the river Brahamani flows quietly. Then suddenly in the 30-km long stretch leading to the steel hub, you find barren hillocks looking like the ruins of some 15th century citadel. A place once lush green with variety of flora and fauna – including plants with medicinal qualities used by the Ho people – looks like wasteland. 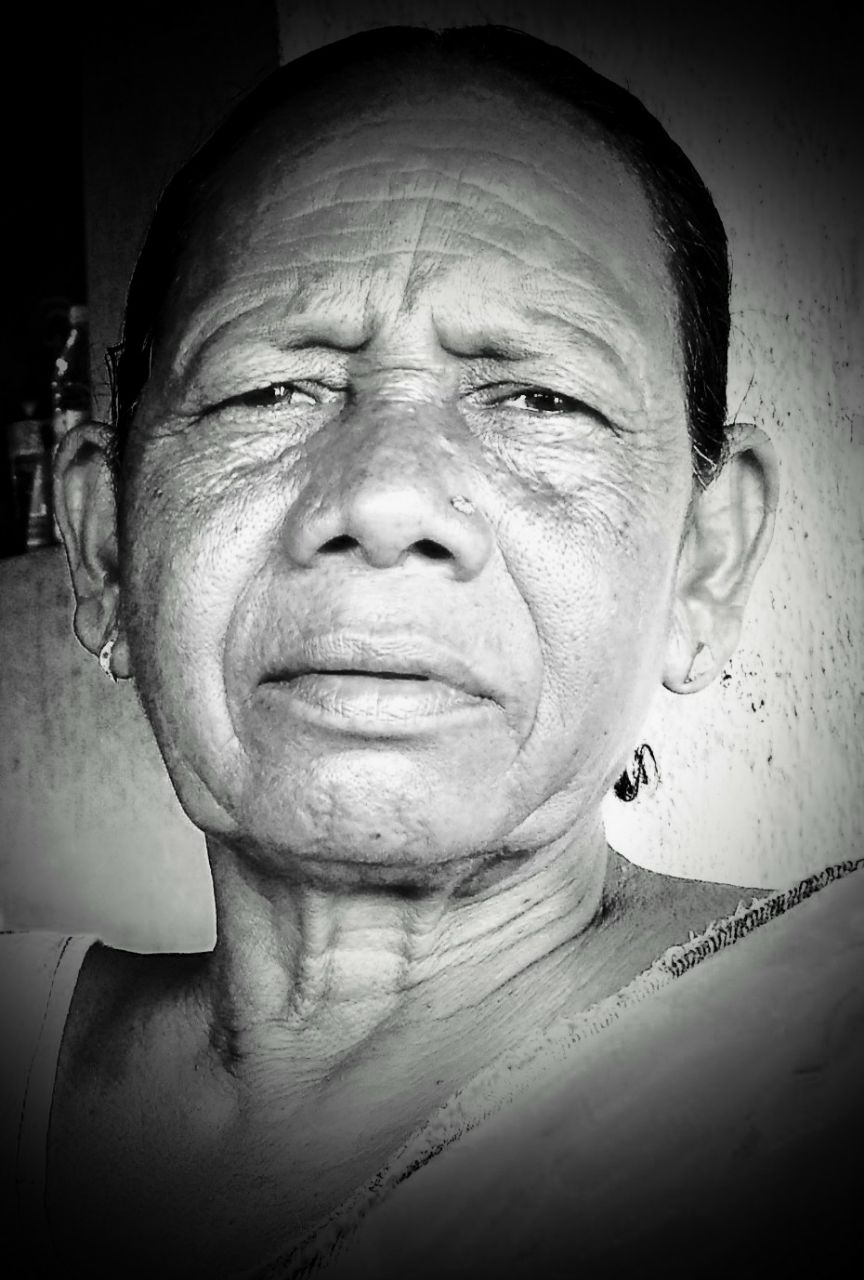 Sini Soi, who became active in the struggle immediately after her son Bhagaban Soi fell prey to police bullets that day, spoke of the continuing harassment and intimidation which have intensified since 2016. She said:

“People have suffered a lot in the process of land acquisition. The company got the land it wanted. But the forest is a life line for us. They are out to destroy the forest land too. The mountain and the trees are our saviour. Instead of running to the hospital, we use herbs and medicinal plants for all kinds of ailments. They are extending the boundary wall now. People have got compensation for the patta land. But even then the company cannot encroach on forest land. They are making rounds daily. Even today they are coming to Baligotho to raze the remaining houses. Around 35 houses were left. They are approaching them in twos and threes and forcing them to leave.”

Looking wistfully at the looming Kiajhor hill across Gobarghati, she said:

“This is the last thing we want to save. We keep going there. If we do not do the rounds, the younger people will not know what to pluck and what to preserve. It is the encroachment on forest land that we have opposed in the National Green Tribunal. Badasuli Pahad of Chandia panchayat and this hill are under threat. Actually, there was no choice other than finally going to court.”

Fearing the worst, local villagers appealed to the DFO Cuttack in September 2016 to put an end to destruction of forest land and the felling of trees. When they got no response from the DFO, four petitioners finally turned to the National Green Tribunal (NGT) seeking an end to the illegal acquisition of forest land. On February 8, 2017, the eastern zone bench of the NGT issued notice to Tata Steel and others following the petition seeking an injunction on the alleged construction of boundary walls and felling of trees by Tata Steel for its proposed extension plan on forest land.

According to Shankar Pani, an advocate based in Bhubaneswar, ‘In September 2005, Tata Steel took possession of 932 acres of land from IIDCO, of which over 77 acres of Chandia and Gobarghati Moza is deemed as forest land in government records. IIDCO is not a competent authority to hand over forest land to a private company without prior approval from the central government under the Forest Conservation Act, 1980.’

Even as the litigation continues, the company is going ahead with its construction plans. Some of the houses being cleared in Baligotho belong to people who have still not received compensation. The family of Sadhuram Mundoya has been left out. He and his four brothers owned 15 acres of land. His son described his travails:

“We owned 15 acres along with our uncles. My uncle Ramlal Mundoya was killed in the police firing. While his brothers got compensated, my father’s name did not figure in the government list. I was already 25 in 2005 and should have also got separate compensation as per the new rehabilitation policy. We were nowhere. I have been running pillar to post for the last 10 years. There has been no house to house survey. They have perhaps done it sitting in some office or under some tree. Now I am told that I am a genuine case; but my exclusion from the list persists. There are two more families within the boundary wall of Baligotho whose names have not figured in the list. Since my house comes within the Tata boundary wall, they have been trying to get us removed through threats.”

On their part, Tata officials deny these allegations.

Kalinganagar is projected as an affluent township in the making. In 2016, the centre approved the establishment of a National Investment and Manufacturing Zone (NIMZ) under the National Mineral Policy in Kalinganagar.

The Rs 4,241 crore project is supposed to give employment to 1.5 lakh people. A huge industrial township is proposed to be built over 163 square kilometres with modern facilities. To supply minerals to these companies and for purposes of export, there are around 12 mining companies active in Sukinda, that has 97% of the country’s chromium reserves.

In 2007, the Blacksmith Institute Report listed Sukinda as one of the 10 most polluted places in the world. In fact, the spate of illnesses and death caused by an excess of hexavalent chromium in the water resources has compelled the local people to approach the NGT to seek attention to the ruination of water, land and air where they continue to live. The deaths caused by malnutrition of children of the Juango tribe in Nagada of Sukinda block had greatly embarrassed the Odisha government that was compelled to immediately take a series of steps to normalise the situation then. However, the Juango people continue to migrate even as development claims by the government fall flat.

Instead of developing existing resources and assets, the state government is incurring the wrath of local people by closing off their sources of livelihood. The Sukinda Shramik Bihaan Farm Sangha struggled hard to oppose the handing over of 270 acres of the Sukinda Bihaan Farm by the Odisha government to the National Seed Corporation. Over 400 casual labourers lost their more than 20-year-old jobs as the new contract company from Jamshedpur retrenched them. Almost all these workers, predominantly women, were from Scheduled Tribe and Scheduled Caste communities. Repeated pleas to the district and state administration yielded precious little.

Ranjana Padhi is a feminist activist and writer based in Bhubaneswar. Rajender Singh Negi is a journalist, editor and translator based in New Delhi.