Why Justin Trudeau Is Supporting Protesting Farmers in India

Along with balancing domestic statecraft, Trudeau also had a score or two to settle with his Indian counterpart, Narendra Modi. 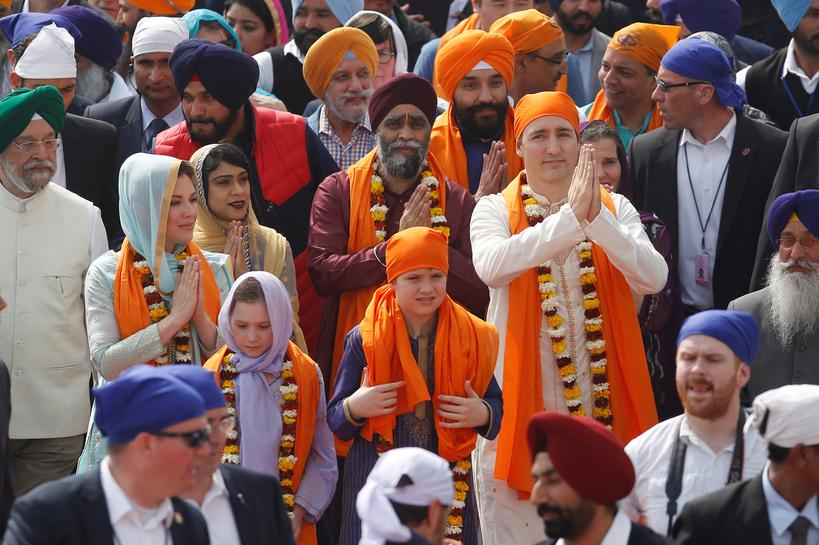 Justin Trudeau and his family in India, 2018. Photo: Reuters

On November 30, while addressing Sikh participants from across Canada, on a Zoom meeting organised to celebrate the birth anniversary of the founder of Sikhism Guru Nanak, Prime Minister Justin Trudeau said, “Canada will always be there to defend the right of peaceful protest.” These words were spoken in the context of the physical force being used by the Indian police against protesting farmers, many of them Sikhs, in parts of north India.

It did not take much time for the rebuke to reach India and invoke a plethora of reactions – the Indian government strongly objected to it, calling the comments ill-informed and unwarranted, while for the farmers, especially Sikhs from Punjab, saw it as a shot in the arm. They expressed their gratitude to Justin ‘Singh’ Trudeau, as he is popularly and fondly known. Most of the Indian media condemned Trudeau for ‘interfering in the internal matter of India’.

Making these comments benefits Trudeau and the protesting farmers, but also reflects the realities of  the globalised world.

Sikh political lobbying is a strong force in Canadian politics, which becomes apparent looking at the sheer numbers of public representatives. The current House of Commons has 18 Sikh MPs out of the total 338, making it a decent 5.32% share, compared to India’s 2.39% (13 Sikh MPs out of 543 in Lok Sabha). This sheer numerical logic makes all the three major federal political parties of Canada (Trudeau’s Liberals, the Conservatives and the NDP) sensitive to affairs and sentiments of the Sikh community.

Also read: Narendra Modi Is Learning the Perils of ‘My Way or the Highway’ Governance

Within this population, the most affluent section in Canada are the ‘Jatts’ who also happen to be the dominant within the group leading the current farmer protests in India. Amongst Sikh circles in Canada, calls to condemn the laws and stand in solidarity were out and up on the very first day the protesting farmers faced the Haryana police. Tens of thousands of households in rural Punjab have family members currently settled and thriving in Canada, so when a Canadian Punjabi stands up and states that it is his brother/father/mother who is being subjected to tear gas and water cannons, more often than not he is not being metaphorical.

It may not be widely known in India that days before Trudeau’s comments, chiefs of the other two federal parties – the NDP and the Conservatives – had already made public statements in support of the farmers’ protests, condemning state violence. Trudeau waited till ‘Gurpurab’ and used the wider platform to assuage their feelings while addressing the 300 odd Sikhs representing different organisations.

Along with balancing domestic statecraft, Trudeau also had a score or two to settle with his Indian counterpart, Narendra Modi. Trudeau, a liberal, both in name and functioning, hasn’t got along with Modi’s ideology or working style. In the last six years, they have ended up at crossroads on multiple occasions, especially on the issue of Canada not heeding to India’s demands of suppressing Khalistani voices prevalent in that country.

Nobody has forgotten, certainly not Trudeau it appears, how he and his family were given a cold shoulder by the Indian administration on his trip to India in 2018. Compared to other heads of state who visited India around the same time, his trip was downplayed and he was made to appear way less significant than what the trade and diplomatic relationship between the two countries would otherwise dictate.

It is also almost embarrassingly predictable to see how the Indian government and its allies in the media are deploying the bogey of Khalistan against the protesting farmers, and Trudeau. Because the majority of protesting farmers are Sikhs, because the majority of Indo-Canadian MPs in Trudeau’s government are Sikhs, they want to discount the farmer’s demands and dismiss it as Khalistani propaganda.

In general, Canada during Trudeau’s time and before is known as a voice for world human rights. This started with its central role in drafting of the Universal Declaration of Human Rights in 1947-48 and continues today with it being a party to seven major international human rights conventions. It may interest naysayers to know that Canada has spoken for the Rohingya, and on Chinese human rights abuses in Hong Kong and on the Uighurs. Earlier this year, Trudeau was the only world leader who took ‘the knee’, in defiance to Donald Trump, while supporting the Black Lives Matter movement.

In a globalised world, what Trudeau has done is something that more and more of world leaders will do. He is speaking for his constituents but also for the powerless, wherever they may be.