Delivering the 15th PD Desai Memorial Lecture at the Gujarat high court auditorium in Ahmedabad, Justice Chandrachud also said that use of state machinery to curb dissent instills fear, which violates the rule of law.

“The blanket labelling of dissent as anti-national or anti-democratic strikes at the heart of our commitment to protect constitutional values and the promotion of deliberative democracy,” he said.

“Protecting dissent is but a reminder that while a democratically elected government offers us a legitimate tool for development and social coordination, they can never claim a monopoly over the values and identities that define our plural society,” Justice Chandrachud said.

“Employment of state machinery to curb dissent instills fear and creates a chilling atmosphere on free speech which violates the rule of law and distracts from the constitutional vision of pluralist society,” he added.

Justice Chandrachud’s comments came at a time when the passage of the Citizenship Amendment Act (CAA) and the proposed National Register of Citizens (NRC) has triggered massive protests in many parts of the country. Protesters against the two issues have been targeted by the BJP as ‘traitors’ and ‘anti-nationals’. The rhetoric was particularly vitriolic during the Delhi assembly elections, as observers have noted.

“The destruction of spaces for questioning and dissent destroys the basis of all growth – political, economic, cultural and social. In this sense, dissent is a safety valve of democracy,” he said.

Justice Chandrachud also stated that silencing of dissent and the generation of fear in the minds of people go beyond the violation of personal liberties and a commitment to constitutional value.

Notably, Justice Chandrachud was part of a bench that had in January sought response of the Uttar Pradesh government on a plea seeking quashing of notices sent to alleged protesters by the district administration for recovering losses caused by damage to public properties during anti-CAA agitations in the state.

On Thursday, the Aurangabad bench of the Bombay high court said that peaceful protesters against the CAA cannot be labelled traitors or ‘anti-national’. The court observed that in a democratic republic, the Constitution has given the people rule of law and not rule of majority. 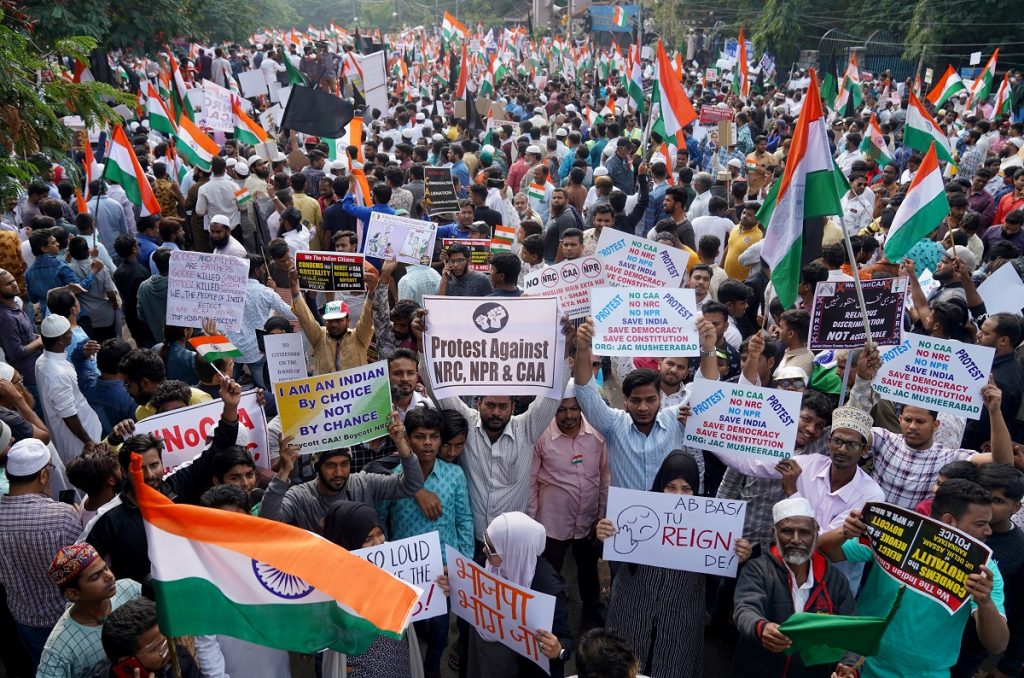 ‘State is required to protect freedom of speech’

On Saturday, Justice Chandrachud said, “The attack on dissent strikes at the heart of a dialogue-based democratic society and hence, a state is required to ensure that it deploys its machinery to protect the freedom of speech and expression within the bounds of law, and dismantle any attempt to instill fear or curb free speech.”

Commitment to the protection of deliberative dialogue is an essential aspect of every democracy, particularly a successful one, Justice Chandrachud said.

He added, “A democracy welded to the ideal of reason and deliberation ensures that minority opinions are not strangulated and ensures that every outcome is not a result merely of numbers but of a shared consensus”.

Justice Chandrachud said the “true test” of a democracy is its ability to ensure the creation and protection of spaces where every individual can voice their opinion without the fear of retribution.

“Inherent in the liberal promise of the Constitution is a commitment to a plurality of opinion. A legitimate government committed to deliberate dialogue does not seek to restrict political contestation but welcomes it,” he further said.

Justice Chandrachud also underlined the importance of mutual respect and protection of space for divergent opinions.

“Taking democracy seriously requires us to respond respectfully to the intelligence of others and to participate vigorously, but as an equal in determining how we should live together,” the Supreme Court judge said.

Democracy is judged not just by the institutions that formally exist but by the extent to which different voices from diverse sections of the people can actually be heard, respected and accounted for, he said.

‘Suppression of difference is a threat to pluralism’

According to Justice Chandrachud, the “great threat to pluralism” is the suppression of differences and silencing of popular and unpopular voices offering alternative or opposing views.

The supreme court judge further said the country was conceptualised”as incorporating its vast diversity and not eliminating it”.

“National unity denotes a shared cultural value and a commitment to the fundamental ideal of Constitution in which all individuals are guaranteed not just fundamental rights but also the conditions for their free and safe exercise,” he said.

He said the country’s pluralism underlines a commitment to protect “the very idea of India as a refuge to people of various states, races, languages and beliefs”.

“In providing spaces to a multitude of culture and free space to diversity and dissent, we reaffirm to our commitment to the idea that the making of our nation is a continuous process of deliberation and belongs to every individual,” he said.

No single individual or institution can claim a monopoly over the idea of India, he said.

Justice Chandrachud also referred to a “positive obligation” for protecting a plural identity.

“The framers of the Constitution rejected the notion of a Hindu India and a Muslim India. They recognised only the Republic of India,” he said.

Justice Chandrachud also said the framers put trust on the future generations to create a common bond of what it means to be an Indian, which “shunned homogeneity and celebrated diversity in what is meant to be an Indian”.

He compared the “layered Indian identity” to Matryoshka dolls, and said this is what makes us Indian “and must be central to our understanding of pluralism and efforts to foster it.

“Homogeneity is not the defining feature of Indianness. Our differences are not our weakness. Our ability to transcend these differences in our recognition of our shared humanity is a source of our strength.

“India is a subcontinent of diversity in itself. Pluralism has already achieved its greatest triumph – the existence of India. The nation’s continued survival shows us that our desire for a shared pursuit of happiness outweighs the difference in the colour of our skin, the languages we speak, or the name we give the almighty,” he added.