World Over, a Spate of Students Protests Over Campus Violence in India

With no sign of backtracking from the government, global protests in solidarity with the movement in India are becoming much more frequent. 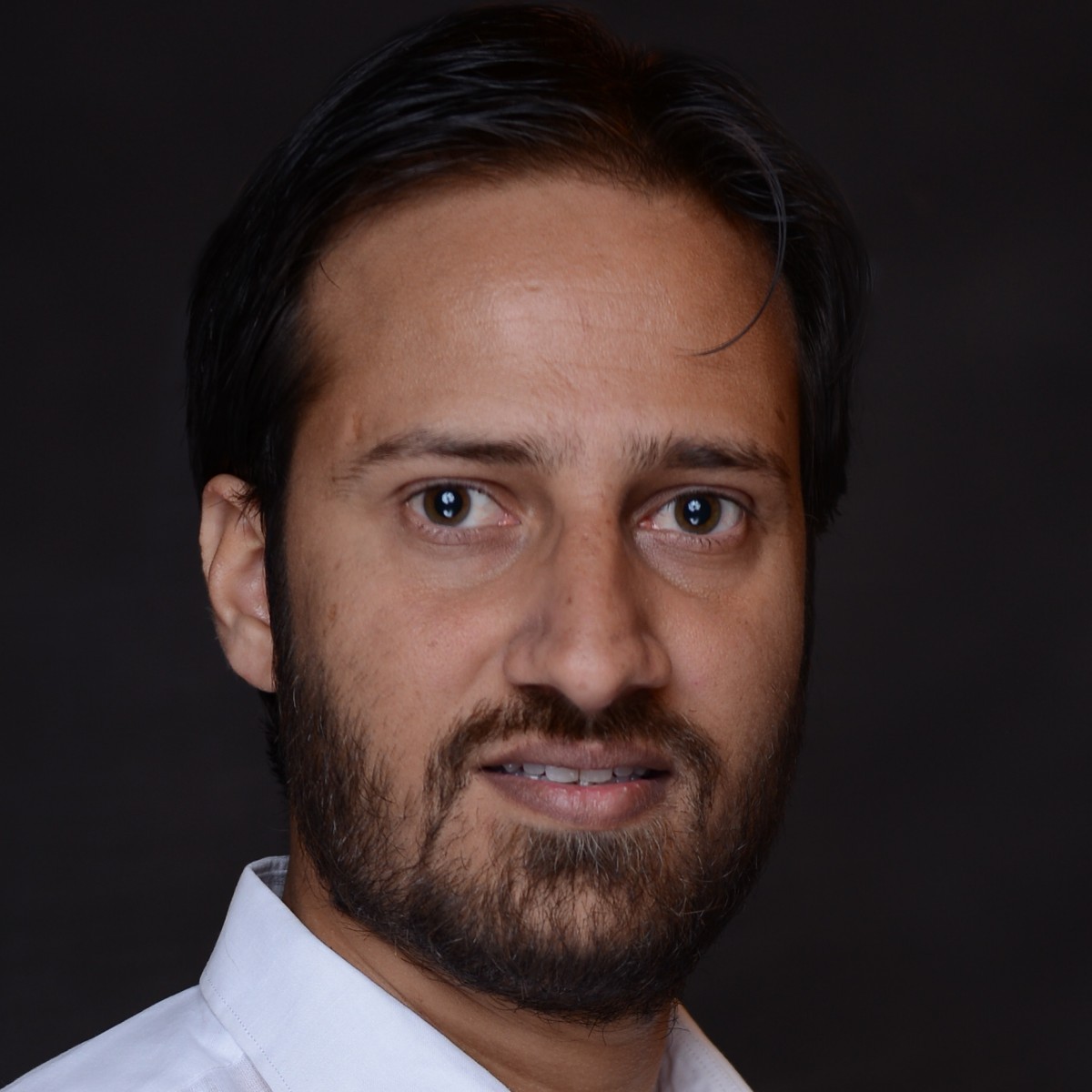 The brutal attack on students at the JNU campus on January 5, has had a spine-chilling effect on students and alumni across the world, reigniting the horror of the brutal violence in Jamia Milia Islamia University and Aligarh Muslim University last month. All these campuses were attacked to curb the constitutional right of students to protest, whether it’s against CAA-NRC or the fee hike. The state has left no stone unturned in its high-handed attempt to muzzle dissenting voices.

It has been over two months since the student movement against the fee hike in JNU started. The movement has seen violence by police on the streets and by security guards on campus in an attempt to break the strike. But students have been fighting, unfettered by the police violence and administration’s apathy to even engage in a dialogue with protesting students. For over two months, this hostile atmosphere could not dampen the spirit of the students.

The attack in JNU on January 5 was the latest attempt to break the movement, but the sheer scale and intensity of the violence and the manner in which it was unleashed in the presence of the police, who gave goons free run for hours and then escorted them out royally, has left students shattered and everyone else numb. The video and visual evidence sparked immediate outrage in India and across the world, and many universities across the globe gave a protest call immediately in solidarity with JNU students and against violence. 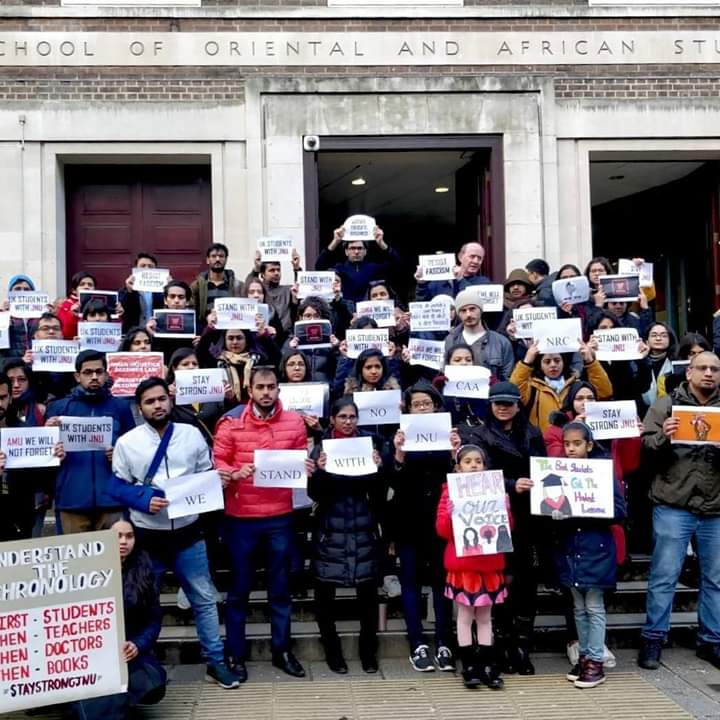 In the UK, protests took place at Oxford University and London. In London, protesters gathered at SOAS on January 6. Protesters condemned the attacks on JNU, Jamia and AMU and extended their solidarity with placards saying “First – Students, Then – Teachers, Then – Doctors, Then – Books’. The people also rejected the controversial Citizenship Amendment Act and the National Register of Citizenship which is at the heart of protests erupting across India.

In Oxford, university students called for a protest on January 6 at Redcliff Camera and extended their solidarity to the students of JNU. The protesters expressed their shock over the continuous violence in universities and in the state of Uttar Pradesh and demanded an independent enquiry over these incidents. The statement signed by 74 scholars from Oxford also called upon the government to pay heed to the demands of the protesters and amend the anti-Muslim clauses of CAA. In the US, protests were organised at New York, Los Angeles, Baltimore, Washington and Philadelphia. In New York, university students and civil society members gathered in crowded streets outside the Indian consulate, in a demonstration and march organised by ‘New York Stands With JNU’. 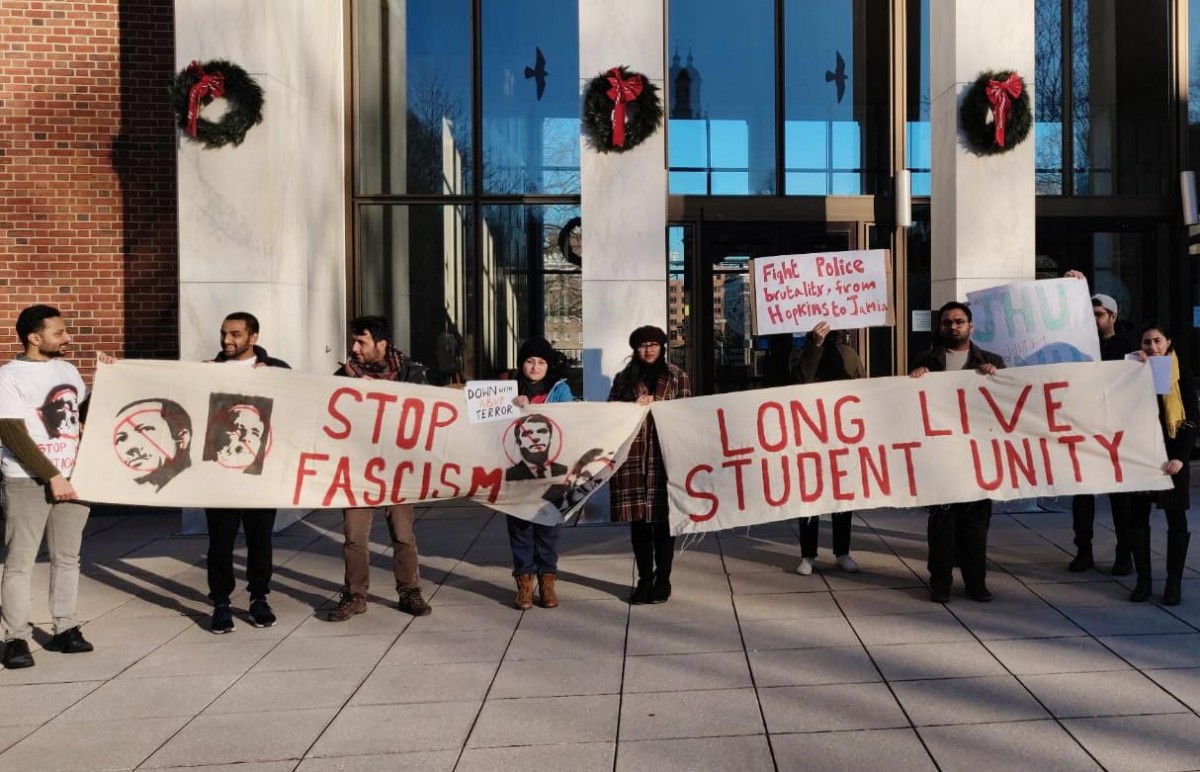 The organisers read out the statement released by the JNU Student Union, and the entire gathering recited the preamble to the Indian constitution. Chants of “Whose streets? Our streets!”, a slogan from the Black Lives Matter movement, echoed alongside strains of “Ham Dekhenge” and demands for azaadi from Sanghi violence, CAA-NRC, and the Modi-Shah government, showing the unity of people’s and students’ movements.

Students and professors from the University of Pennsylvania, in their statement, condemned the violence at JNU and extended their solidarity with protesters against the CAA-NRC in India. The statement demanded an end to state violence in India and the release of Chandra Shekhar Aazad. 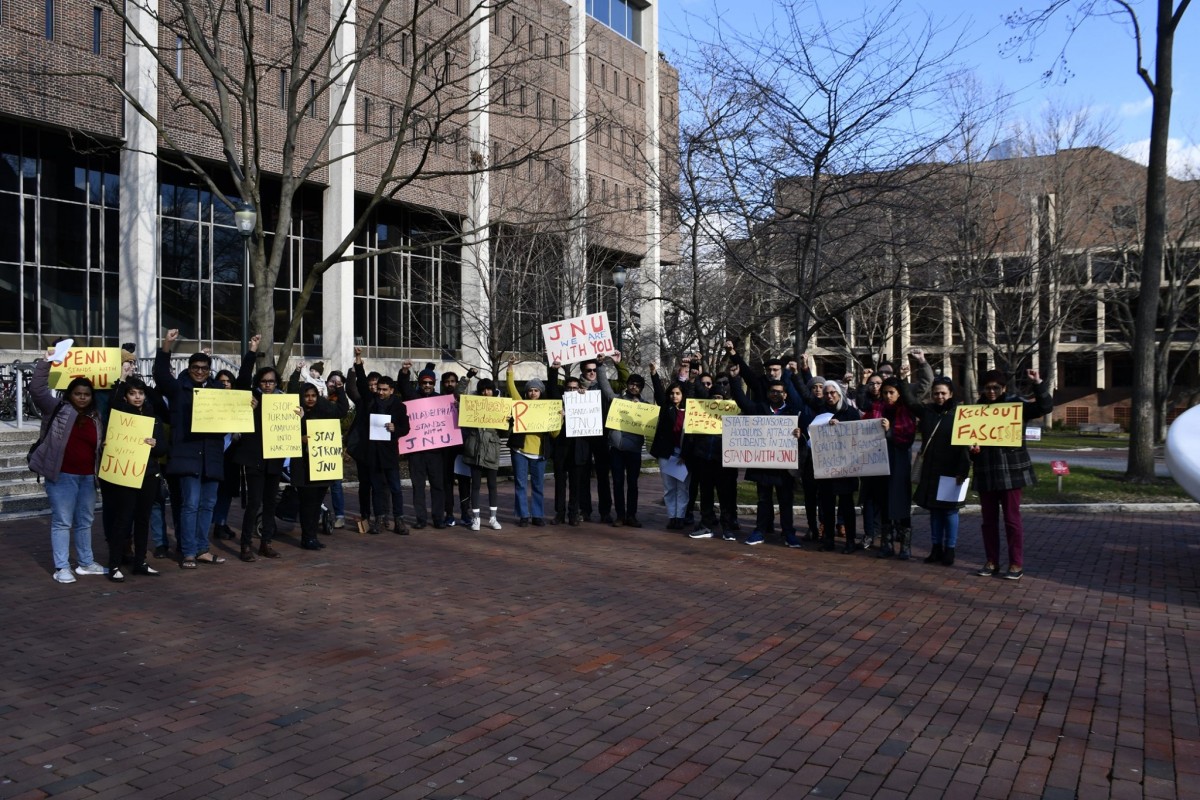 Protest at the University of Pennsylvania, Philadelphia. Photo: Author provided Protest at the University of Pennsylvania, Philadelphia. Photo: Author provided

In Los Angeles, students of the University of California, Los Angeles organised a protest which was attended by students from Los Angeles and concerned citizens. The protesters called upon the government and the university administration to stop violence on the campuses. Furthermore, students extended solidarity to the ongoing protests against CAA-NRC with a slogan, “No Human is Illegal, No CAA-No NRC”.

In Baltimore, students of John Hopkins University, organised a protest. The statement from the protesters said, “We demand the student safety and academic freedom are ensured. We also demand the resignation of home minister Amit Shah, JNU Vice-Chancellor, Jagdish Kumar, and the JNU Registrar, Pramod Kumar, as they failed to ensure the safety of the students. Further, we demand an impartial enquiry that documents how the attacks transpired and brings those responsible for justice”.

In Washington, a protest was organised at the Bobby Morris Field. Sagar, one of the protesters in Washington said that “It’s important to send a message to protesters back home that we stand by them and we are thankful to them for standing up against the legalization of discrimination against the constitutional value of multiculturalism and secularism”.

Apart from these, students and civil society also organised protests across the world in cities like Toronto, Philadelphia, Kathmandu, Karachi and Lahore.

Students and citizens across the globe have recognised the anti-student character of the current regime in India, which is at the centre of violence and is instrumental in giving a sense of impunity to the miscreants. Since 2014, this government has been at loggerheads with students starting with the Film and Television Institute of India, the Indian Institute of Technology – Madras, Hyderabad Central University, JNU, Jadavpur University, Manipur University, Panjab University, Jamia Milia Islamia University, Delhi University and Aligarh Muslim University and so on. All these premier institutions of learning have been at the receiving end of state violence and fund cuts.

The violence in the campuses is thus a result of the high-handedness of the government in repressing the students’ democratic rights. Universities in India and abroad are responding to this crisis and making their presence felt along with the citizens’ protest happening across India.

Indeed, many of the demands of students from AMU, JNU, and Jamia resonate with the situation abroad, where, particularly in the US, rampant privatisation has created a student debt crisis, and the mass detention of immigrants and non-citizens is a preview of the even greater horrors that will be unleashed with the CAA-NRC.

International media has taken note of the high-handedness of the Modi-Shah government’s actions against students. As the BJP’s false promise of economic growth is revealed, even former Modi cheerleaders abroad have changed their tune. Meanwhile, with no sign of backtracking from either the government or protesters, global protests in solidarity with the movement in India are becoming much more frequent.

In New York alone, the protest on December 6 was the fifth such event since the attack on Jamia students. As both the government’s repression and people’s action continue in India, more protests are planned in coming weeks against the CAA-NRC. It remains to be seen how the Indian government will respond.