'They Were Banging the Door With an Iron Rack': Students, Teachers Describe JNU Violence

Students protesting against the fee hike say ABVP members are responsible for the violence in which close to 20 students, including the JNU students' union president, were injured. 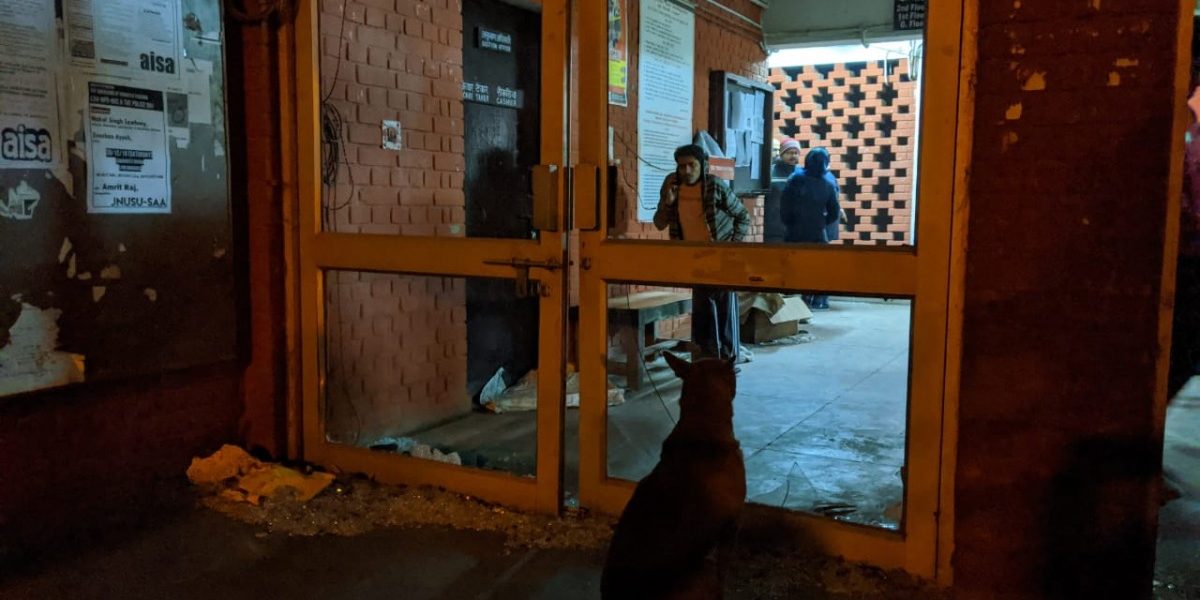 New Delhi: After a day of violence, students, teachers and alumni gathered at Jawaharlal Nehru University on Sunday night in a show of strength and solidarity. At 1 am, the main university gate, which had been blocked since before 7 pm, was stormed open by those protesting against the attacks students and teachers had faced during the day.

Most students The Wire spoke to, particularly those who are not associated with any of the political groups on campus, did not want to be identified. “I can’t even trust the police,” one of them said, “so how will I know that I won’t be targeted?”

Students and teachers who were at the receiving end of Sunday’s attack are convinced that it was orchestrated by the right-wing well in advance. Reports of “clashes” on campus, they say, are only a ruse to make it seem like both sides were involved. The fact that a group of men and a few women were allowed to roam freely in the campus while carrying lathis and other weapons – and leave even after reports of brutal violence and serious injuries – for more than two hours suggests that they are right.

Inside hostels, when masked groups with weapons broke doors, windows and property within rooms, they knew “exactly which rooms to attack”, students allege. Rooms belonging to Muslims students and students associated with Left groups were broken into and ransacked, The Wire was told, while those belonging to ABVP (Akhil Bharatiya Vidyarthi Parishad, students’ wing of the RSS) students were left untouched. Inside Sabarmati hostel, The Wire was able to confirm that hostel rooms had broken into and property inside destroyed.

Close to 20 students were injured, and treated at the AIIMS trauma centre. Aishe Ghosh, JNU students’ union president from the Students’ Federation of India, was specifically targeted and hit on her head multiple times with lathis.

Students The Wire spoke to said that the story of Sunday’s violence can be traced back to Saturday, when students from Left organisations, the JNU students’ union and others were blocking registration as part of their protests against the fee hike. They had gathered in front of the Computer Integrated Servers near the School of Biotechnology, to try and block the WiFi services for online registration.

The ABVP, whom many are holding responsible for the violence, had initially supported the campaign against the fee hike. However, they later withdrew this support.

“Yesterday was the first time they openly confronted those who are still protesting,” a political science student who did not want to be named told The Wire. “They instigated and provoked those who were sitting at the servers, and a scuffle ensued.” Students from both sides have said that they were injured, and the guards intervened to stop the violence from going further.

After that, though, students allege that ABVP members began targeting students who they thought to be “protestors”, heckling and cornering them. “To counter that, there was a call for a large mobilisation on Sunday morning in the central school area, and lots of people came for that. They [ABVP] did not come there. But then they started gathering near the administrative block.” 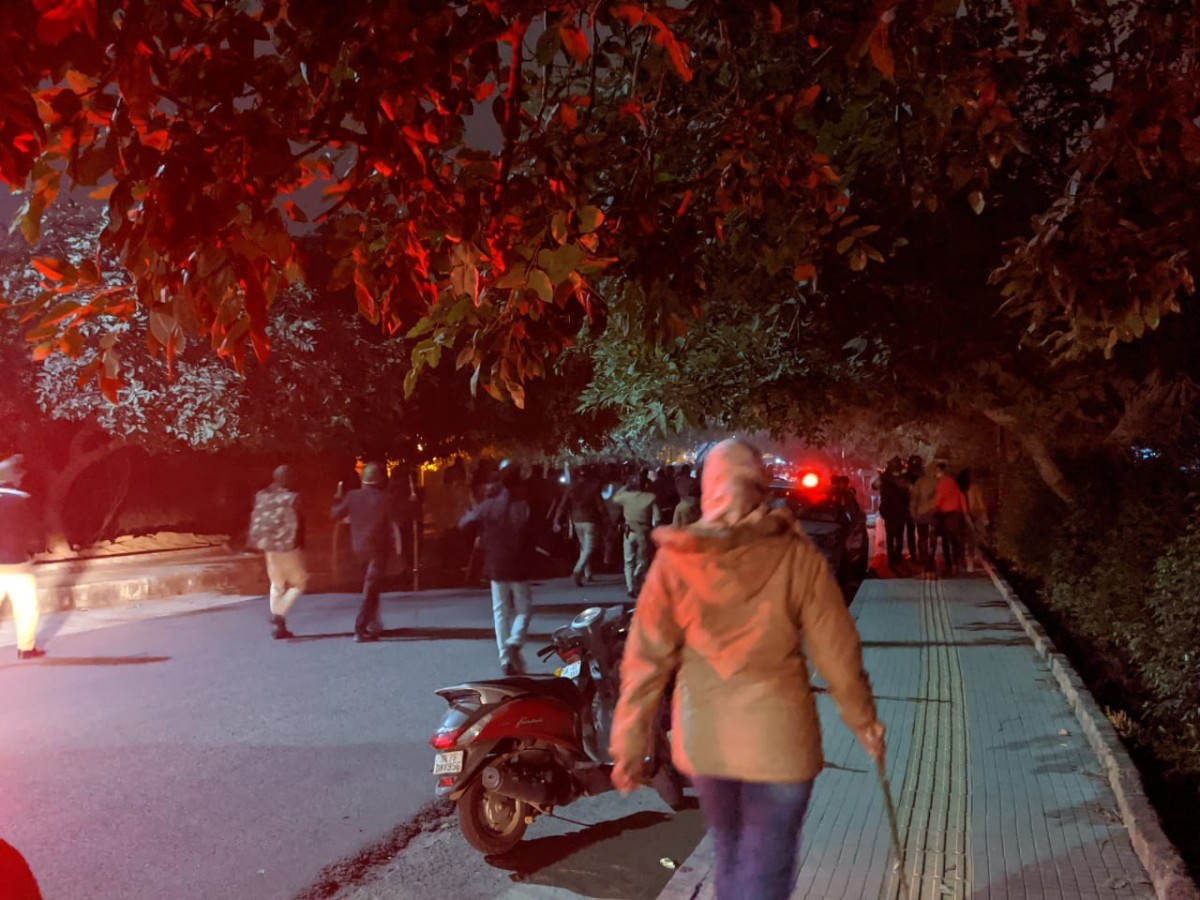 That irked the protesting students for one major reason – around the administrative block, the varsity authorities have imposed a kind of Section 144. If students are seen to be gathering, they are immediately dispersed. But the ABVP group, reportedly, was allowed to collect right outside the administrative building – holding rods and sticks.

After collecting, the group with rods then made their way to Periyar hostel, allegedly intimidating other students on the way.

“When we heard about this, we decided to collect at Periyar. As soon as we reached there, ABVP members started throwing stones at us. Some people from our side also threw them back, and there was a scuffle. Hostel property was also damaged. Then the police came. The police only intervened once our side also got threw a few stones – when just the right-wing was violent, they did not care what happened to us,” a female student from the English department told The Wire.

“We called the police when we saw men with rods roaming the campus. They did nothing,” another student added.

When the police intervened, the crowd outside Periyar dispersed.

A little before 7 pm, masked men and women armed with sticks, iron rods and hammers – in a group of about 40 – began to attack protesting students who had gathered outside Sabarmati. As students ran away, the men followed, even going into the hostel. 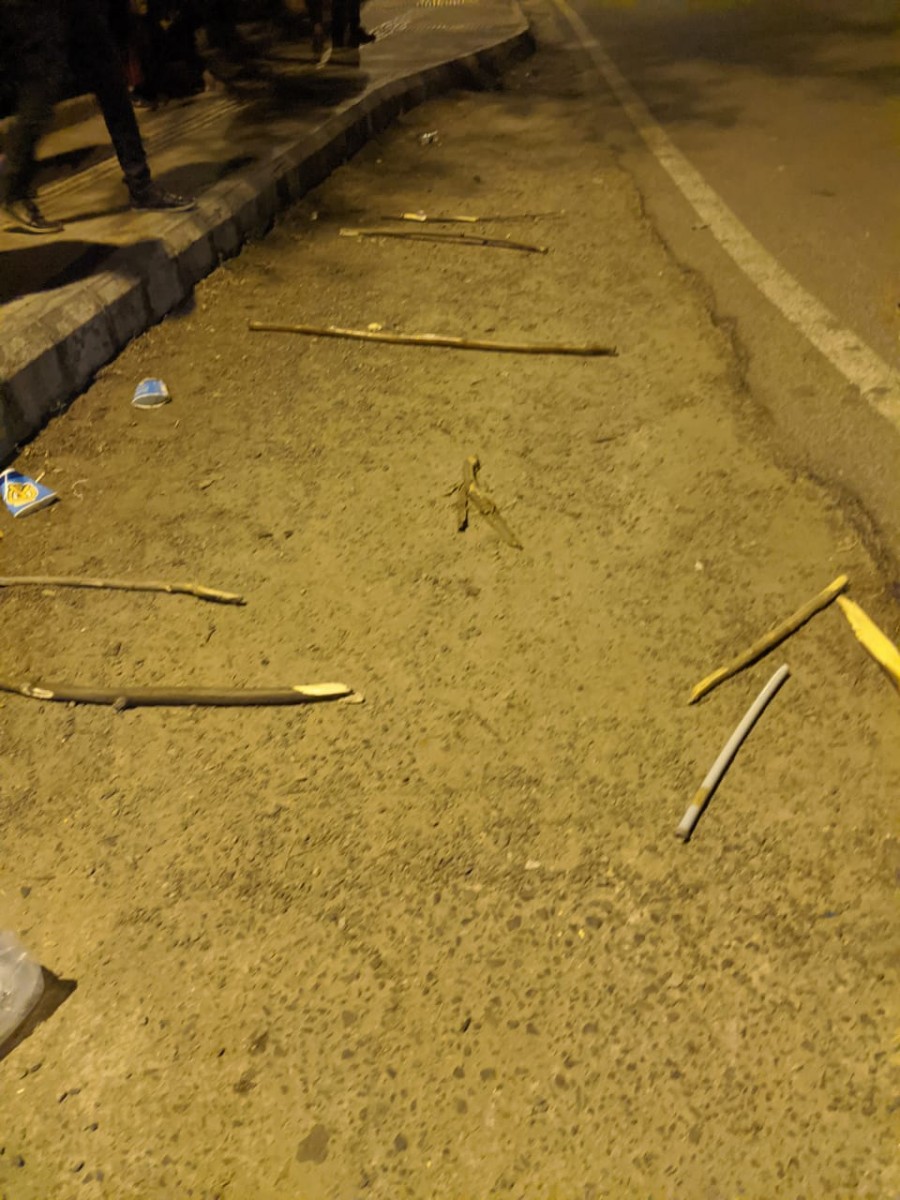 “I was in my friend’s room in the girl’s wing of Sabarmati, we had come inside about an hour before that after joining the protest,” a history student told The Wire. “We heard some loud voices and footsteps, and some shouting. Then someone started banging on the door, saying ‘Baahar aao (Come out)’. We just huddled inside until they left.”

The front door of Sabarmati hostel, made of glass windows, has been smashed. Inside too, broken glass and furniture can be seen. Cars parked outside have also had their windows smashed.

During the violence at Sabarmati, JNU students’ union president Aishe Ghosh was brutally attacked. She suffered serious injuries on her head. Her and a number of others – close to 20 students, including two from the ABVP – were taken to the AIIMS trauma centre for treatment. Students allege that the police first tried to block ambulances too, and had to be convinced to let them leave campus.

Teachers were not spared either. Professor Sucharita Sen, from the Centre for Study of Regional Development, was hit on the head with a large rock while teachers tried to form a protective layer in front of the students. She suffered a deep cut on her head and was taken to AIIMS.

According to the ABVP, its JNUSU presidential candidate Manish Jangid was one of the people injured. A reporter from The Wire saw Jangid at AIIMS with other injured students, but he had no visible injuries. The Wire has reached out to a doctor at the AIIMS trauma centre asking about the extent of Jangid’s injuries, and this article will be updated when he replies.

Faculty seen to be siding with students protesting against the fee hike were also reportedly targeted.

“At around 7 pm, 40-50 people gathered outside my house [in the Old Transit Flats] and started banging, asking my husband to come out. I said through the window that I am alone at home and won’t open the door. They kept banging, saying they will break the door. I propped a table against the door. They had lathis and rods, but the tried to tell me they wouldn’t hurt me. I said I can’t trust you. Finally they left, but they said they will come back later, ” Shraboni Mondal, whose husband Debabrata Pal teaches in the economics department, told The Wire.

“When I went out after they had left, I saw that they had emptied our iron shoe rack and were using that to bang on the door.”

Between 8 and 8:30 pm, men with lathis were seen exiting the JNU campus – most on foot and some in SUVs. The police and campus security did not stop them from leaving. When asked why men with lathis were being allowed out without questioning, a guard told The Wire, “Anyone who wants to leave, can leave.”

After those men left, the campus descended into an eery silence. Other than outside Sabarmati hostel, where students had gathered to sloganeer, all the other streets were empty. Usually, on a winter night, students can be seen across campus at all hours.

“I was here [outside Sabarmati] when the masked guys came. We all ran, my friends and I ran there [pointing to the dirt path next to the dhaba outside]. But then I saw one woman had fallen, so I stopped to help her,” Shivani from the French department said. “By the time she got up, they had surround us. We were trapped between two cars. I recognised some of them despite their covered faces – they are ABVP members from JNU. They are the ones who wanted to hit us. The outsiders stopped them, saying let them be. That’s how we got away.”

Students at Sabarmati said they felt safer outside, together. “What will I do if someone comes to my room while I am alone?” a student with a disability who was at the protest told The Wire.

At short intervals, police on campus would patrol the area, but they did not try to break up the protest. 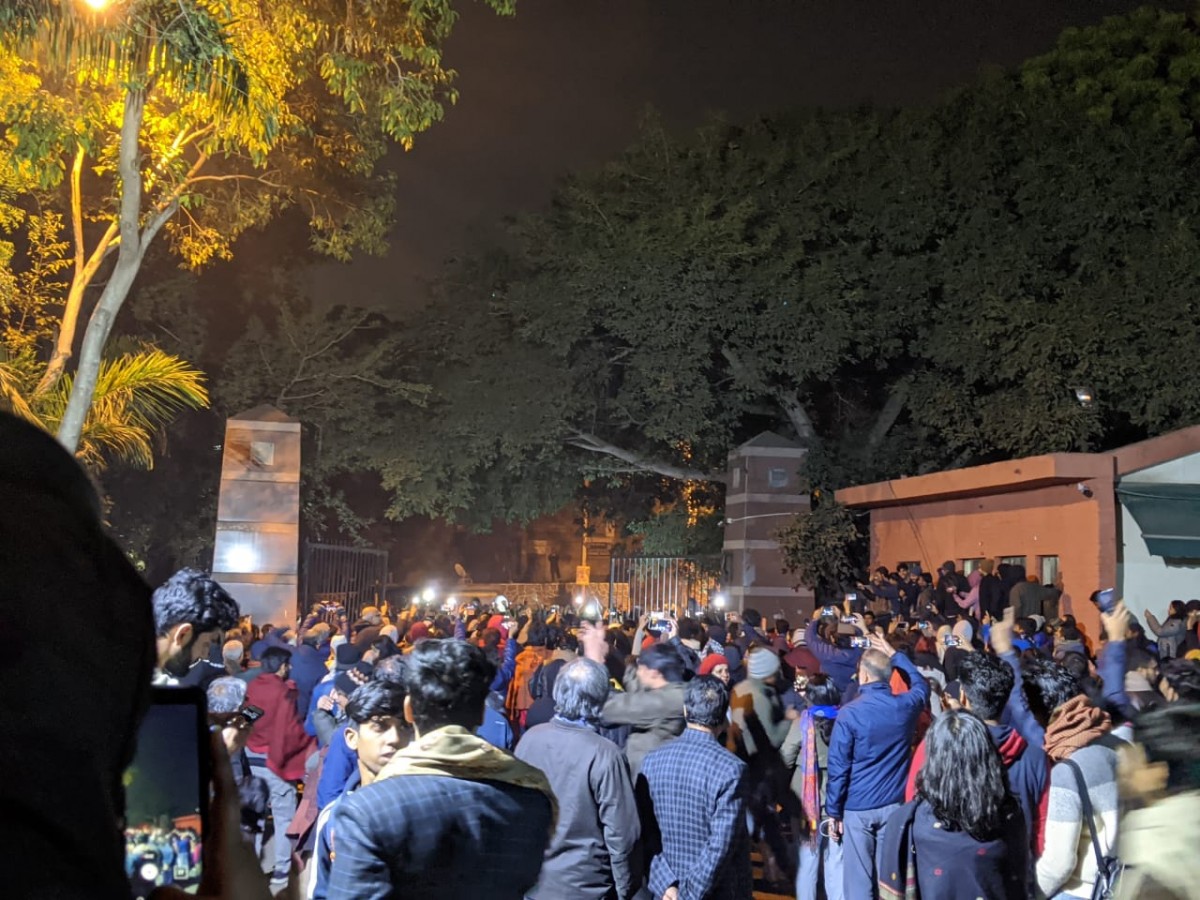 By midnight, students heard that the main gate was now crowded with well-wishers – though earlier there had been reports of right-wingers heckling, abusing and assaulting others there, including Yogendra Yadav. A march was called for, through various hostels and to the main gate. When protestors reached the main gate, which had been blocked off by the police, they were greeted by alumni and supporters on the other side.

As the show of solidarity continued, the gate was stormed open, and hundreds of protestors came together from either side. They then made their way back to Sabarmati hostel, to continue their sit-in.

After the protestors’ march, the police held a “flag march” on campus silently.