JNU and the Pathology of the Right 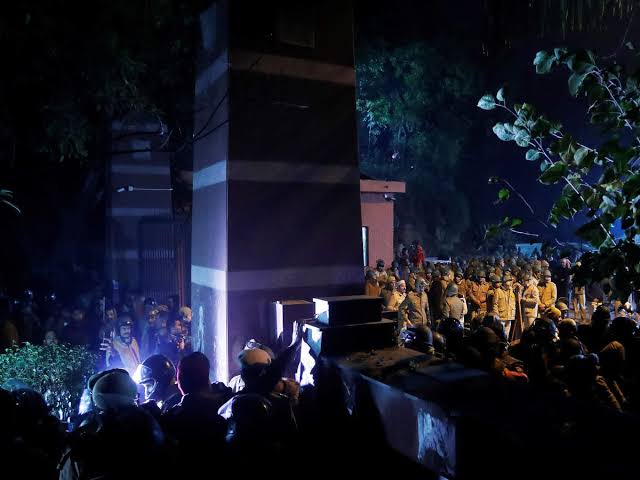 Surya Prakash, a visually-impaired MPhil scholar of Sanskrit, has a swollen left arm from the beatings with steel rods he received during Sunday’s attack on the Jawaharlal Nehru University campus, attributed to ABVP-led assailants.

The reason he was attacked, Prakash says, was the image of B.R. Ambedkar on the door of his hostel room.

The attacks in JNU on January 5 were unprecedented, but the response to those dastardly attacks will go down in history if this nation is to be saved from the fangs of fascism. Soon after the attacks – which included chasing down girl students to their hostels with acid, and pelting stones at the faculty – students and faculty gathered the next day for a protest march, one where even a mainstream actress like Deepika Padukone did not hesitate to identify herself.

The real scare was not the macabre attack, but the utter lack of logic. Why was JNU attacked? A university that was protesting against fee high can be detested because the current dispensation is interested in privatising higher education, the ideology of the place can be resisted, the faculty can be despised. To organise a pogrom against them for three hours by letting loose hoodlums makes little sense.

In its inexplicability lies the explanation. Only when violence has no reason does it create real panic. Peaceful protests in JNU could be dealt with politically in many ways, but by letting loose mayhem, the government lost its case. But what it sought to win in its pathological justification is to generate a rare kind of fear that it thought would rub off on the rest of India.

In organising an attack when it was least warranted, the attack and violence go beyond all possible explanation, and that’s the source for fear – a fear that can last for long and bring rich political and electoral dividends.

This precisely was perhaps the calculation of the university’s Vice Chancellor and the home ministry.

Students stage a protest at the main gate of JNU over Sunday’s violence on Monday, January 6, 2020. Photo: PTI/Atul Yadav

To add insult to injury, the JNU VC M. Jagadish Kumar on January 7 issued a statement asking everyone concerned to forget about what happened  to move on and begin the process of online registration.

This reminds one of Prime Minster Narendra Modi wishing Kashmiris on Eid soon after the scrapping of Article 370 – a whiff of sadism that they feel will resonate with many Hindus.

With elections round the corner in Delhi, they feel this is a crisis that might pay them back. Most governments wish to gain the support of the electorates by resolving a crisis, but Modi’s government has always stood out in its attempts to gain support by creating a crisis where none existed.

In earlier elections in Delhi in 2015, the BJP triggered violence between Dalits and Muslims in Trilokpuri, and organised attacks on churches.

It must be unprecedented that a university becomes a rallying point for electoral discourse. But the university in focus, even if its reach is limited, represents an alternative worldview. A government that has the kind of popularity that Modi seems to enjoy would have ideally ignored this, but Modi-Shah, backed by the RSS, feel that this is the time when they cannot afford to be lenient. Instead, they have to compulsively treat every opponent as an enemy and every possible site as an enemy territory.

When the protest meeting was taking place in JNU on the evening of January 7, a drone hovered above, taking pictures. This is generally used as a counter-insurgency tactic.

When the hoodlums were let loose, what was obvious was the proportion of violence they were capable of and how much the pathological politics of the right-RSS-BJP combine is dependent on demonstrating and taking pride in such dastardly methods.

It represented a nationalism that suffers from self-arrogating a sense of ownership but lacks the compassion of belonging – a narrative that found its resonance in the defective personality of the present VC, who not only lacks compassion but can also be ruthless with anyone who dares to differ.

It is in this ruthlessness that he and the brand of politics he represents find their real essence because outside of it is a long shadow of loneliness and a simmering feeling of worthlessness – a feeling that society has collectively failed to elevate them from.

The real ‘crisis’ of JNU is its resoluteness – the university seems to compulsively jump back to life when faced with odds. This energy comes from the fact that its very functioning in its day-to-day workings is based on odds. It faces the challenges of recruiting students from the most backward of areas and equips them with the confidence that social elites have enjoyed all through. There cannot be a greater challenge than this in a caste-ridden society like ours. This is a challenge that JNU has internalised for more than half a century now. Therefore, a physical assault, like the one it witnessed on Sunday can shock it, but cannot submerge its identity.

When a campus faces possibly the gravest social challenge as a part of its institutional functioning, a physical attack can only be taken as an aberration of that ugly reality of India that JNU lives every day in its life.

Students and faculty were surprised, shocked but not indisposed. Soon after the attack, there was a renewed commitment to reclaim JNU as a space they belong to. This is a surreal reality that the right-wing hoodlums could make little sense of. In their shallow celebration of a ‘victory’ they had in subjugating unarmed students reflected the helpless of the right-wing politics that wished to subjugate ideas with violence; discussions with lumpenism.

The sense of inferiority of the right-wing hoodlums was clear even as they were mid-attack.

The Narendra Modi-Amit Shah brand of politics are riding history at this critical juncture, capitalising on large swathes of population that await the liberation and freedom that sites like JNU can potentially offer.

The anger against JNU is the anger against not being part of a journey one desperately wants to be, even if it is in one’s subconscious. It is this latent desire that creates an intimate fear for which paradoxically JNU alone remains its possible redemption.