The police claim that the 35-year-old shopkeeper had incited violence after an elderly woman died in the accident, but Bashir Ahmad Bhat’s family says he has no history of trouble-making. 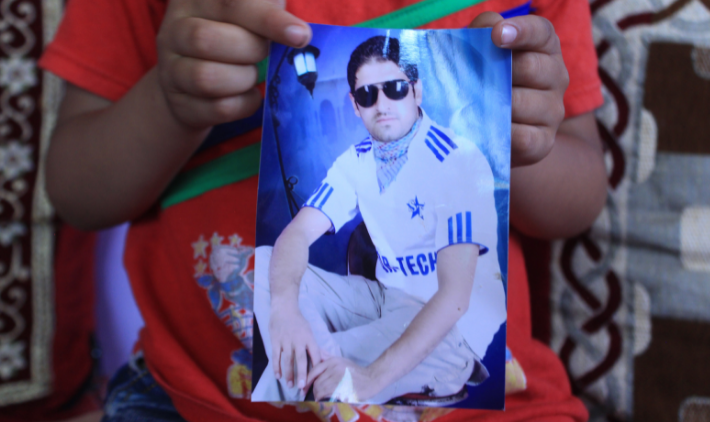 Bandipora: The family of Bashir Ahmad Bhat, a 35-year-old shopkeeper in the Nadihal area of Bandipora district, alleges that he has been charged under the Public Safety Act (PSA) and shifted to a jail in Jammu because he had shot a video of an accident in which an elderly woman was run over by an army truck and killed.

The accident had taken place on July 14, 2021, when a convoy of army trucks passed through Nadihal village. After the accident, which had taken place in front of his shop, Bashir was one of eight people picked up by the police for allegedly inciting violence, instigating youth and sloganeering near the accident spot. While all these eight people, including Bashir, received bail 15 days later, the police detained Bashir for a little longer, saying that certain legal formalities had to be completed, but charged him the same day under the PSA and shifted him to a jail in Jammu.

‘He did not shout slogans’

The police report on Bashir reads: “On reaching the accident spot, police party witnessed a group of people chanting pro-Pakistani and anti-India slogans. Police received a report, which revealed that Bashir was among the accused who chanted slogans also (sic).”

However, Bashir’s family denied these allegations and said that Bashir had been detained because he had shot a video of the accident.

“A few videos of the accident, including the one shot by Bashir, went viral on social media that day and he was detained because of the video,” alleged a relative of Bashir on the condition of anonymity. “The police came to his shop and took him away. They said they needed to investigate a few things and would release him later, but he wasn’t released.”

Also read: The Modi Government’s ‘New Era’ for J&K Is Nothing To Celebrate

Bashir’s family claims that they had had no idea about the PSA charge until Bashir called them via another person’s phone to say that he had been shifted to Jammu and had been booked under the PSA.

“Since then we have had no idea about his whereabouts and wellbeing,” said Shameema, Bashir’s wife.

Bashir has no past history of stone pelting, FIRs or any kind of trouble-making reputation, say the members of his family as well as their fellow villagers.

In fact, although the police report on July 14 had quoted Ali Muhammad Gani, the chowkidar of Nadihal area, as saying that Bashir had tried to disturb the peace in the area, Gani himself told The Wire that Bashir had not shouted any anti-national slogans at the accident spot and was innocent.

“Unintentionally and unaware of the consequences, Bashir shot a video of the incident which went viral later, but as far as I know, he did not shout any slogans there,” Gani said.

Shameema pointed out that Bashir can clearly be seen in his own video. “He is not shouting slogans. He is just talking about the accident and requesting the amplification of the video. They have put him behind bars and slapped him with the PSA only in reprisal,” she alleged. “Hundreds of videos of such accidents go viral on social media every day. Why was only my husband booked for shooting a video?”

With Bashir in jail, Shameema and their two small children have been struggling even to eat. Bashir was the sole earning member of the family and had recently taken a loan of Rs 35 lakhs from the bank and from other traders to set up his shop. Ever since he was arrested, the shop has been closed.

“I am a lactating mother, but sometimes I have to skip meals,” said Shameema. “Sometimes relatives or neighbours bring us some food. There is nobody to look after me and my children. I cannot manage without my husband.” With Bashir in jail, Shameema and their two small children have been struggling even to eat. Photo: author provided

So far, Bashir and Shameema’s four-year-old son has no idea that his father is in jail. “When he asks about Bashir, I tell him that his father has gone to Jammu for some work and will return with toys for him,” said Shameema.

Even on Eid on July 21, Shameema and the two children went hungry. “For me and my children, Eid was no less than a funeral,” she said.

Javid Ahmad Koka, the station house officer of the Aragam police station, refused to comment on the matter. He told The Wire only that Bashir had been detained as a preventive measure and that was all he was allowed to say.

The PSA, according to advocate Habeel Iqbal, has been misused in Kashmir for a very long time, used constantly by the authorities to suppress the voices of innocent people.

Several international human rights organisations including the United Nations High Commissioner for Human Rights refer to the PSA as a “draconian” law. Amnesty International even calls it “lawless”.

Originally, detainees under the PSA were kept within the erstwhile state of Jammu and Kashmir. But an amendment in the Act in August 2018 made it possible for those charged under it to be detained outside the Union Territory as well.

Shameema cannot afford to hire a lawyer or go to Jammu to meet her husband in jail.

“I cannot afford to fight this battle or go to Jammu. I request the authorities to release my husband on humanitarian grounds or shift him to any jail in Kashmir so that I and my children could at least see him often,” she said.