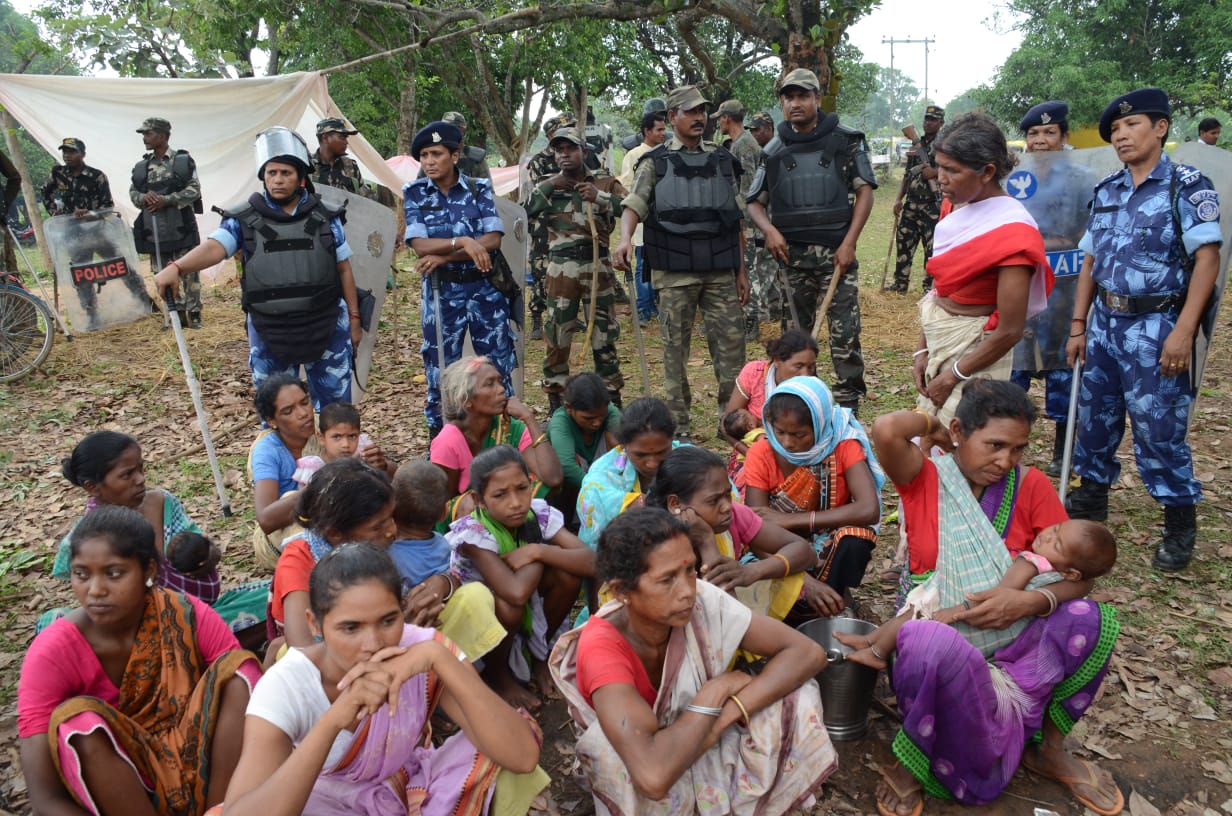 Villagers rounded up by the police. Credit: Special arrangement

Ranchi (Jharkhand): The Munda heartland, a region which produced famous tribal leaders like Birsa Munda and Jaipal Singh, is going through turbulent times. There have been frequent and intense conflicts between villagers and the police, culminating in villagers attacking the house of former deputy speaker Karia Munda, followed by large-scale repression by the police.

On Tuesday, June 26, after the police reportedly roughed up a gathering of Munda villagers near Anigarha in Khunti (Karia Munda’s village) about 40 km southeast of Ranchi, the villagers allegedly raided the house of the former Lok Sabha deputy speaker and abducted three security guards – Subodh Kujur, Vinod Kerketta and Siyon Surin.

Karia Munda and his sons were not at home when the incident took place. The house was being guarded by three security persons.

Soon after the abduction of security persons, the state government deployed thousands of policemen and paramilitary forces across nearly half of Khunti district, frantically searching for the abducted men. While they are yet to be found, villagers have reportedly said that unless the governor, Droupadi Murmu, holds a dialogue with them on their issues, they are not going to release the men.

Karia Munda, who has not been back home since the incident, said in a statement:

“After statehood, mostly BJP has ruled Jharkhand. The situation today is worse than before. The present situation has arisen because government allowed an itch to become a wound (funsi ko foda banne diya).”


While Khunti district has virtually turned into a police cantonment, district deputy commissioner Suraj Kumar and superintendent of police Aswini Sinha are camping in Ghaghra, where villagers performed a pathalgadi ritual (installing a memorial stone) on June 26.

“The government has filled many villages with security personnel. Today (on June 27), nearly 200 men, women and children of Ghaghra village have been picked up and kept in the police tent,” said a villager. Villagers also said that one person died in a stampede triggered by police firing.

Traditionally, pathalgadi is a ritual performed by various tribes, particularly those belonging to the Austro-Asiatic group, during the last rites of a person who has died. It is believed that a Munda is born from the earth, and so when she dies and is buried, a stone is placed at her head so that she rests in peace within the earth.

In fact, the word ‘pathalgadi’ is relatively recent. Traditionally, the act of placing a stone at the tomb of a dead person was known as ‘sasandiri‘. After the Provisions of the Panchayat (Extension to Scheduled Area) Act came about in 1996, noted social worker and former IAS officer B.D. Sharma and veteran tribal leader and former IPS officer Bandi Oraon initiated the practice of placing stone slabs inscribed with rules and provisions of the PESA Act to raise awareness in villages. It is during this time that the word ‘pathalgadi’ gained popularity, eventually replacing the word ‘sasandiri’. Now the word ‘pathalgadi’ is used for the burial rituals as well.

The PESA Act is in force in Fifth Scheduled Areas, which cover most districts of Jharkhand. According to the Act, gram sabhas have a decisive say in many matters, and the local administration then has to go by the decision of the gram sabha.

For the last two years, Munda villagers from several villages in Khunti district started performing pathalgadi in the way Sharma and Oraon popularised, detailing on stones the powers of the gram sabha and other provisions in the fifth schedule of the constitution. At the bottom of the stone, they added, ‘Outsiders are not allowed into the village without the permission of the gram sabha’.

Slowly, pathalgadi became a movement and its leadership became more radical. They argued that the tribal region of Jharkhand is a separate ‘dishom (country)’, as the government is not interested in working for them. And so they had to take matters into their own hands.

In all, around 80 villages in Khunti district are a part of the pathalgadi movement. In more than half of these villages, people have performed pathalgadi and barred the entry of outsiders.

A region with a difference

The Khunti region of Jharkhand is unique. Land rules here, called Register II, are different from the rest of the state. Under these rules, a Munda family still has the zamindari right to employ tenants on their land and collect revenue from them. Even some forest areas, called Mundari Khuntkati forests, are owned by Munda villages. In all, there were about 500 such forests across the district. In 1947, the government of Bihar (Jharkhand was bifurcated from Bihar in 2000) brought about the Bihar Private Protected Forest Act and vested control of about about 300 Mundari Khuntkati forests to the government. However, 200 forests still belong to the Mundas.

However, in 2006, the government of India passed the Scheduled Tribe and Other Traditional Forest Dwellers (Recognition of Rights) Act. The Act said that if you are living in a forest and tilling land there, you can apply for ownership of that patch of land. The Mundas were asked to apply for rights over the land they tilled under this Act. They refused, saying that this violates their Register II rights.

The tribals have been alleging for years that successive state governments have not been following the special provisions created for them through different Acts by virtue of them living in a Fifth Scheduled Area. Discontent slowly built up, eventually taking the shape of the pathalgadi movement.

Radical pathalgadi leaders have, in recent days, tried to create a self-sufficient governance system in the area that is ‘separate’ from the state, forming a bank of their own and following a unique education policy, as well as setting ablaze voter ID and Aadhaar cards.

While many leaders have been arrested and put behind bars, new people have taken their place. Joseph Purty is an active leader and the police has been looking for him. Two days ago, police reached his native village Udburu, located eight km from Khunti district headquarters.

Famous tribal leaders like Birsa Munda and Jaipal Singh were from the Khunti region. Speaking in the constituent assembly, Singh reposed his faith in the independent Indian government and expected it to work for the good of the tribal people. He also said:

“Sir, most of the members of this House are inclined to think that flag hoisting is the privilege of the Aryan civilised. Sir, the Adibasis had been the first to hoist flags and to fight for their flags. Each village has its own flag and that flag cannot be, copied by any other tribe. If any one dared challenge that flag, Sir, I can assure you that that particular tribe would shed its last drop of blood in defending the honour of that flag. Hereafter, there will be two Flags, one Flag which has been here for the past six thousand years, and the other will be this National Flag which is the symbol of our freedom as Pandit Jawaharlal Nehru has put it.”

Singh is still worshipped in the tribal heartland, but it seems the pathalgadi leaders are no longer following his rejection of separatism. 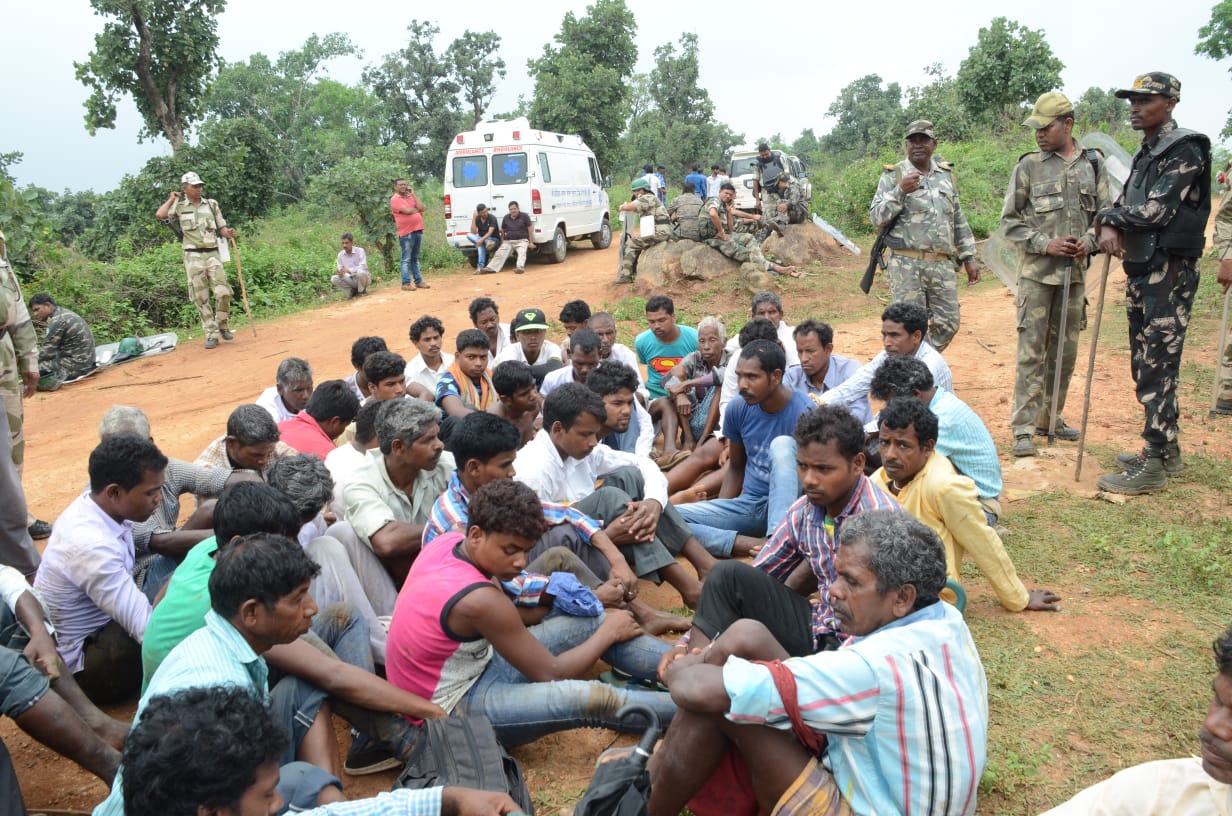 Villagers rounded up by the police. Credit: Special arrangement

“Not only Khunti, but the entire tribal area of Jharkhand is passing through a critical phase. There is widespread discontent all over. Dialogue between the state and the people has ended, and administrative terror has replaced it,” Jharkhand Mukti Morcha (JMM) general secretary Supriyo Bhattacharya told The Wire. JMM is the main opposition party in the state. Bhattacharya said the president should step in, as administrative and law and order mechanisms have collapsed in most parts of the state.

Meanwhile, about a week ago, another heinous crime wrecked havoc in Khunti. Five activists from a street theatre group, which was performing a play to create awareness against trafficking, were abducted and raped. The team of artists had been called to a school in Kochang by a Roman Catholic priest. The police have arrested the priest and a few others.

Pradeep Yadav, Jharkhand Vikas Morcha principal general secretary and MLA, said that anger in the tribal belt of Jharkhand has been aggravated by policies of the Raghubar Das-led Bharatiya Janata Party government. “The government is engaging only with force. Dialogue has stopped. In fact, former chief minister Arjun Munda himself has said that if dialogue is not involved, the problem in Jharkhand may go from bad to worse,” said Yadav.

“The chief minister has left the pathalgadi issue in the hands of the police. They are messing things up further. The government should convene an all-party meeting and decide a fitting approach to deal with the problem,” Yadav added.

Bandhu Tirkey, a popular tribal leader, echoed a similar sentiment. “The government should immediately form a committee of well-accepted tribal leaders to hold dialogue with the pathalgadi leaders.”