Improper implementation keeps even basic entitlements out of the reach of Pahadi Tola's residents, leaving them indifferent to elections. There is no running water in the slum, people carry water from far away places. Credit: Abinash Dash Choudhury and Varsha Poddar

Ranchi: It is a hot summer morning in Pahadi Tola, a slum in the heart of Ranchi, where about 100 families have been living since a decade. Sudhan Kunwar, around 70-years-old, has just finished fetching and storing water to her makeshift plastic tenement for domestic use. She lives in the makeshift tenement with two of her nephews.

Kunwar skipped work to repair her home, which was affected by the previous night’s strong winds and abrupt rains. “I go out to pick rags on better days, when I feel well,” she says. Scrounging through the city’s waste gets her a meagre Rs 100 a day. On other days, she has no work.

Also Read: Jharkhand Prepares to Vote on the Burning Issues of a Young, Tribal State

Kunwar, like most others in the slum, is an Adivasi woman from Palamau, one of Jharkhand’s poorest districts. She migrated to the city in search of work about three decades ago. “I have been in this city for as long as I can remember; I got married and all my children died here,” she recollects. “They did not let us use the forest’s resources, and we moved to the city to survive.” 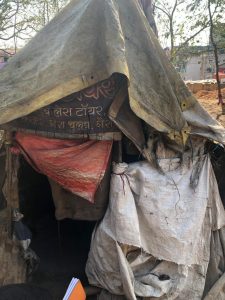 Her young nephews, of about 10-years-old, are her only companions. “They do not go to school,” she says, “sometimes, they collect used plastic bottles, and make Rs 50 or so a day.” With her meagre earnings, Kunwar barely manages to eat. “The three of us just about manage. I can afford some rice, but nothing more. We cannot be sure to eat every day,” she says.

For many others in Pahadi Tola, where Ranchi’s poorest live, this is the reality. Working as rag-pickers in the city, they earn very little to subsist. Without decent living conditions, the families stay amidst dumps of city-waste and sewage residuals, in shanty houses that blow away in rain. The insecurity of being evicted by municipal authorities is also a concern for many. Most children drop-out of schools to aid the family’s income. Some attend nearby government schools, or with the help of NGOs, they can afford low-cost private schools.

Access to the most fundamental element of life, food, remains patchy for most families. Nearly all households are eligible to receive subsidised rations every month on ‘priority cards’ provided under the National Food Security Act, 2013. It allows them to buy 5 kg of rice per person at Rs 1/kg. However, most residents are either unaware or excluded from their entitlements.

Those who depend on the state’s social security measures often slip into the cracks of the system. “I never had a ration card, nobody has ever helped or told me to get a one,” says Kunwar. Because of her falling income and old age, the public distribution system (PDS) is vital for her.

In addition to food grains, Kunwar is also guaranteed an elderly pension of Rs 600/month, under the National Social Assistance Policy. She has never availed this entitlement either.

A creaky social security system, and lack of measures to safeguard entitlements, has had catastrophic effects on the underprivileged in these places.

Some families which have tried to apply for ration cards have either failed or had to pay a price for it. Phulo Devi now has a ‘priority card’ for her family, but enrolling wasn’t an easy process. “We were asked to keep going to the court a lot of times, where they kept making us wait. In the end, we paid Rs 100 to get the cards,” she said. The exploitation by government officers acts a deterrent for many to claim their entitlements.

Even for those who have ration cards, the ordeal does not end. Binita Devi, 30, an Adivasi from the Lohra community, settled in the slum a few years ago, after her marriage. Her husband was taken ill with epilepsy, after which Devi was the family’s sole breadwinner. It was crucial for her to avail ration from the PDS. She is entitled to 25 kg of rice, but has been receiving less for years.

“We have been getting 21 kg for the past few years. When we ask for the complete entitlement, the dealer does not respond. We cannot always question as it is our only source of food,” says Devi, frightened that her words might irk the dealer.

The state government claims that the Aadhar Based Biometric Authentication (ABBA) has helped reduce identity frauds. But this ‘digital revolution’ has not helped beneficiaries from claiming their full entitlement from the PDS. 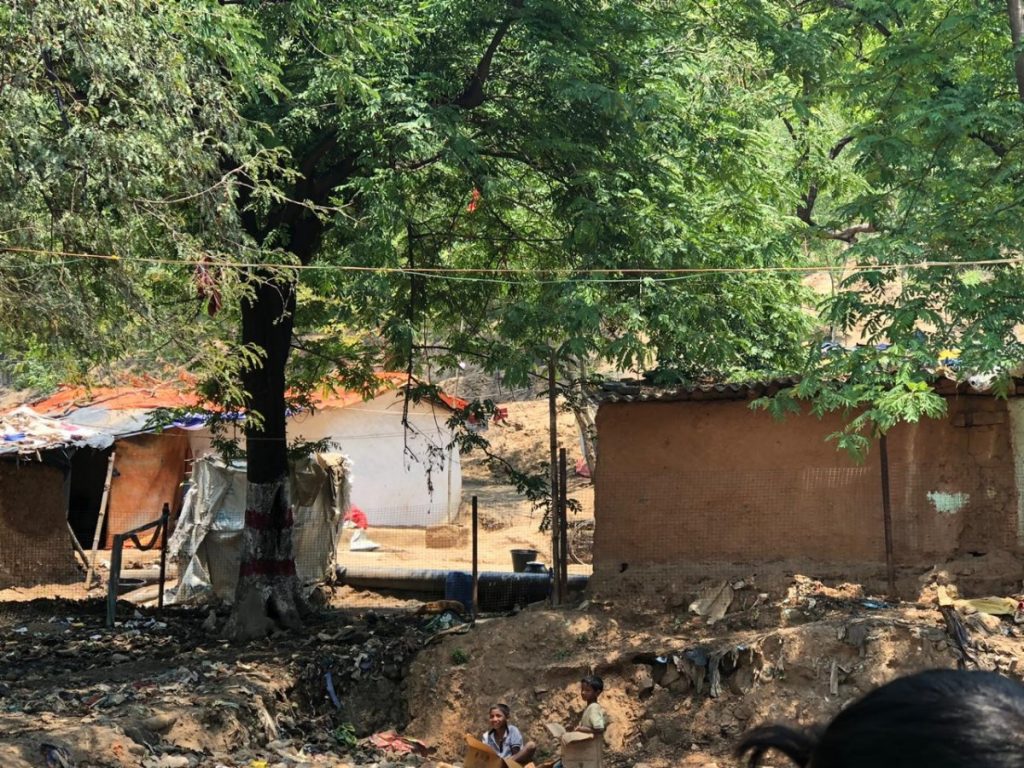 Apart from fundamental entitlements, many crucial health and nutritional facilities are also missing in the slum, especially for mothers and infants.

Mano Devi, who is five-months pregnant, has never received packaged food she is entitled to. “There is no anganwadi here, nobody tells us what we should eat or not,” she says. Nutritious intake is guaranteed to pregnant women and mothers under the Integrated Child Development Scheme. But lack of implementation has left them in a lurch. In addition, Devi’s never received the maternity benefit of Rs 6,000 for her first-born, although mandated by the NFSA, 2013.

The situation is similar for most mothers here. There are no anganwadis nearby to take care of mothers and infants, leaving them to battle malnutrition. For children, government schools around the slum have failed to provide eggs regularly. “They get eggs only once a week and usually only half a piece. The food too is just rice and dal,” says Saraswati. Her children dropped out from a nearby government school.

In 2011-12, Jharkhand was India’s most impoverished state, with 37% of its population under the poverty line. Adivasis constitute 26% of the population. An expert committee’s recent report on tribal health focusing on Jharkhand, Chhattisgarh, Odisha said accessing healthcare is a critical challenge for impoverished Adivasi communities.

As per the National Family Health Survey-4 for Jharkhand, only 62% of 12-23-month-old children are vaccinated against the six major illnesses. Nearly 45% of children under the age of five are stunted, 29% are wasted (low weight for height), indicating malnourishment. The report also says 65% of women are anaemic. And, only 7.2% of infants in Jharkhand within the age group of 6-23 months receive adequate diet. 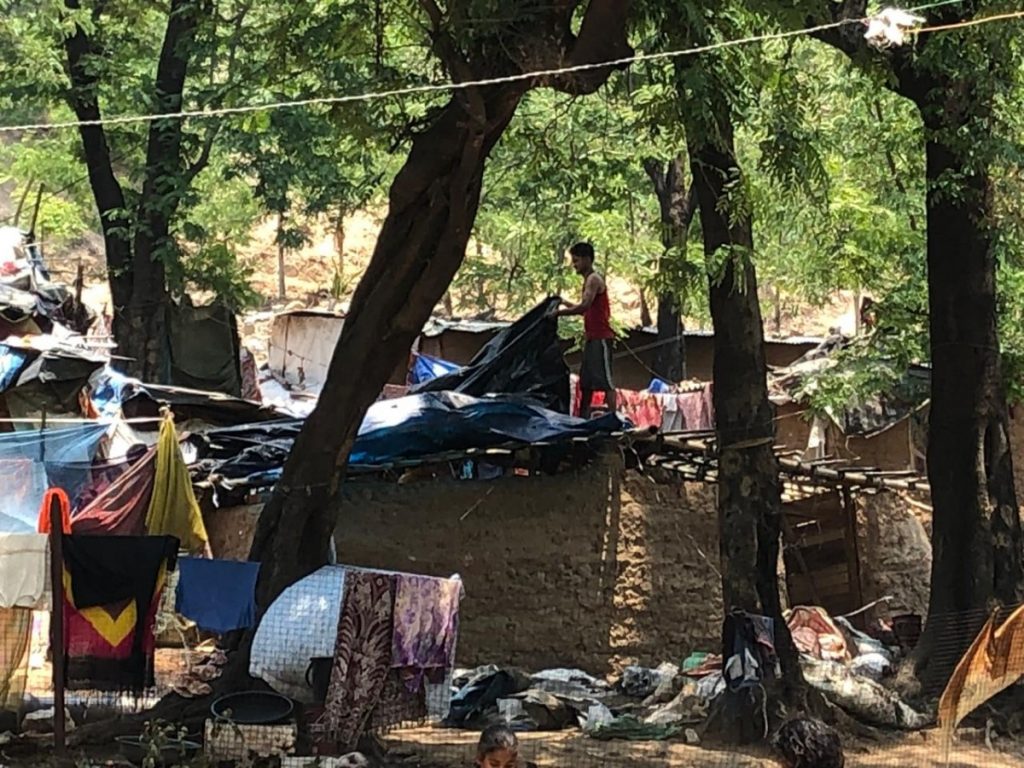 At least 18 people have died in Jharkhand because of starvation in the past year. Most of these deaths were attributed to the myriad problems associated with the PDS. Quantity frauds, Aadhaar failures and exclusion have caused these deaths. However, the incumbent Bharatiya Janata Party’s state and Central governments have repeatedly denied such reports. The state’s food and civil supplies minister, Saryu Roy, rejected the claims of activists, even calling them ‘foreign agents.’

The Jharkhand Mukti Morcha recently released its manifesto, saying it is “in favour” of non-use of Aadhaar for public utilities. However, on a much stronger note, the Congress’s Ajoy Kumar has promised revoking Aadhaar’s mandatory status. The ruling party makes no promises on this issue.

For the likes of Sudhan Kunwar, elections mean very little. In the heart of the city, Kunwar and her likes, remain invisible citizens. As Ranchi goes into polls on May 6, many still yearn for basic food, health and education.

Abinash Dash Choudhury and Varsha Poddar are Skye Fellows. They are also associated with the Right to Food Campaign, Jharkhand