If Jharkhand's Direct Benefit Transfer Experiment Isn't Working, Why Is It Still On?

A government social audit conducted in April has found that 96.9% of people in Nagri block want to go back to the old public distribution system rather than continue with the Aadhaar-link benefit transfers. 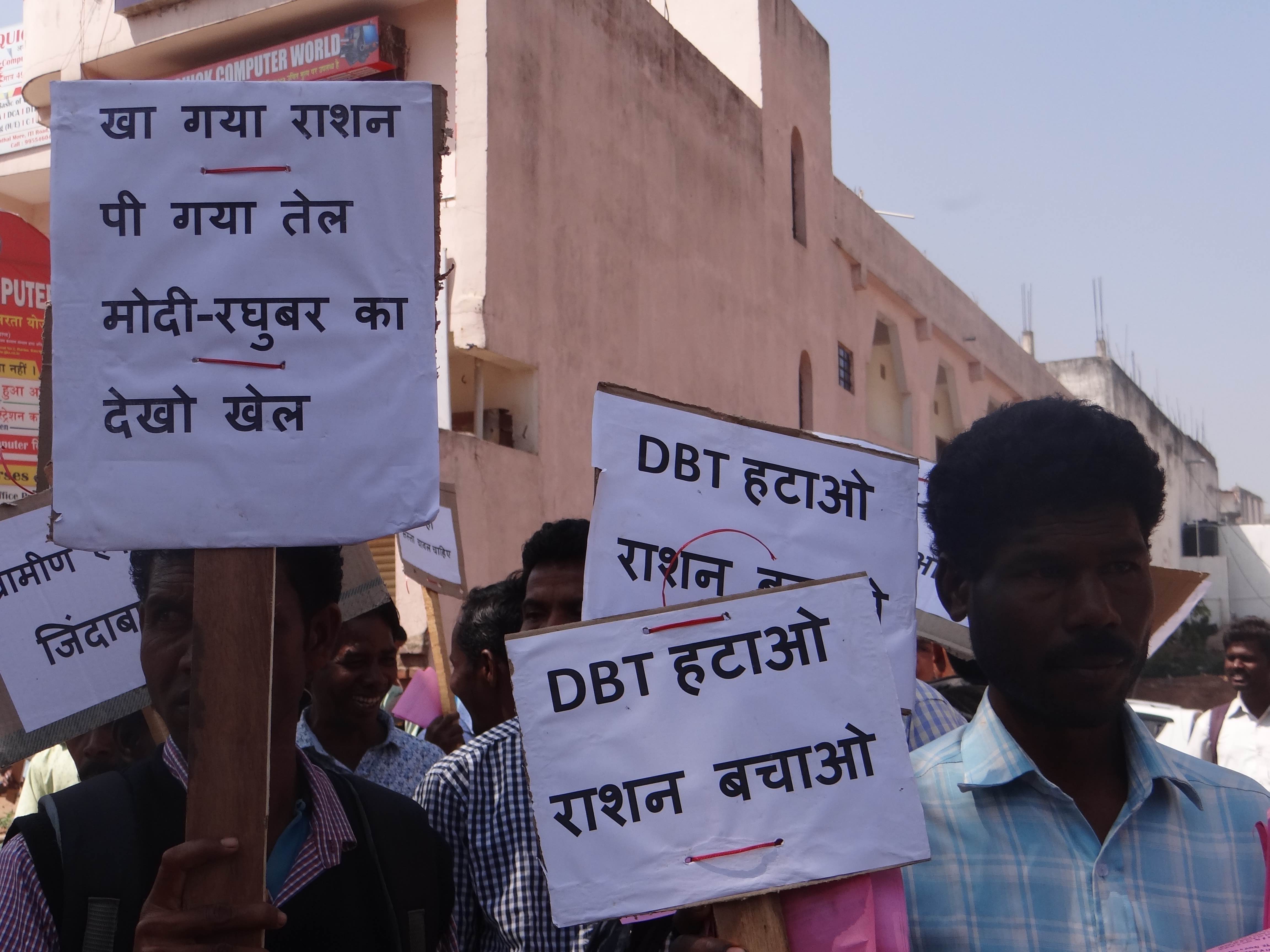 People carrying posters against the DBT scheme during a march on February 27, 2018. Credit: Jahnavi Sen

New Delhi: Even though a Jharkhand government social audit has confirmed widespread dissatisfaction with the Aadhaar-linked direct benefit transfer (DBT) pilot experiment in the public distribution system (PDS) in Nagri block, the project continues as before.

The pilot project was rolled out in October 2017, and by early this year it was clear that it was not working for the people. Under the new system, instead of going to the local ration shop and buying rice at Re 1/kg, people first had to wait for the government to transfer Rs 31/kg they were entitled to into their account, add Re 1/kg to that, and use that money to buy rice.

On February 27, more than a thousand people marched from Nagri block to Ranchi, demanding that PDS delivery return to the old system. The Wire had reported then that the new system was creating a host of problems for the people, to the extent that they would much rather go back to the imperfect older system. To check if the money had come, they would need to make several trips to the bank. Then there were more trips to the Pragya Kendra (a local business correspondent) to withdraw the money since the transactions were too small for banks to carry out. Some people were even receiving the DBT as Airtel Money – which they had no idea how to retrieve. Several were using their own money to buy rice at Rs 32/kg, since warning notices were sent to those who did not pick up their ration, saying their cards would be cancelled. Even the ration dealers were unhappy with the new system – stocks would lie with them for days on end while people waited for their DBT money.

Around the same time, the Right to Food Campaign had conducted a survey in Nagri on the DBT experiment. They found that an overwhelming 97% of respondents wanted to go back to the old system. The food minister, Saryu Rai, and food secretary, Amitabh Kaushal, had then met with representatives from the Campaign and agreed to conduct their own social audit, based on which they would decide whether the experiment was worth continuing.

That audit was conducted in April, but the results were not immediately made public by the state government, despite repeated requests from activists. The report is now available online, on the website of the government’s Social Audit Unit. 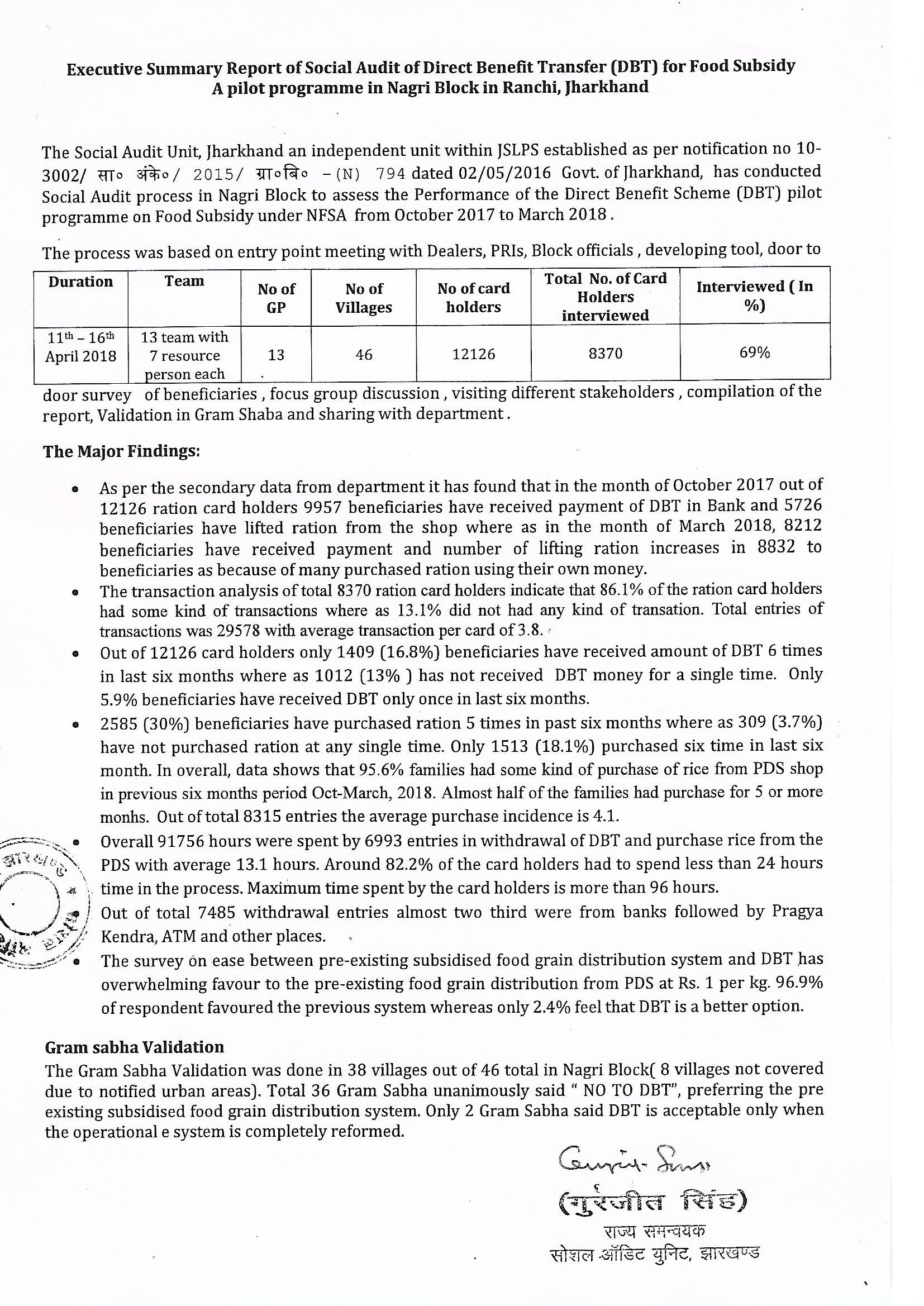 According to the report, 8,370 ration card holders across 13 gram panchayats were surveyed for the audit – and 96.9% of them wanted to go back to the old PDS system.

The report also says that in as many as 36 of Nagri block’s villages (out of 38 surveyed), the gram sabhas made it clear that they did not support the pilot project under any circumstances and did not want a DBT system. The other two gram sabhas said the DBT system would be acceptable only if it was completely reformed. The government’s results, then, align directly with those of the Right to Food Campaign.

The report also confirmed what the villagers were saying about the increased amount of time they had to spend trying to access their ration dues: on average, the respondents spent 13.1% trying to withdraw their most recent DBT instalment. In addition, while respondents had withdrawn their DBT payments an average of 3.6 times in the last six months, they had purchased rice on an average of 4.1 times – showing that they were using their own money, and so spending Rs 31/kg more than they had to, in certain months.

Only 16.8% of the audited ration card holders said they received the DBT all six times in the last six months. In addition, 13% said they hadn’t received it even once.

An officer at Jharkhand food department secretary Amitabh Kaushal’s office told The Wire that the audit report has been sent to the Central Food and Public Distribution Department, and a response is awaited. “Policies cannot be cancelled just like that,” he said. “The Centre has to take a call, we have given them the information.” When asked about what precisely the letter said, and what the state would be doing for those who had suffered under the new system, the officials said those cannot be made public.

Even before the Centre was sent the audit report, the state government told activists from the Right to Food Campaign that they wrote to Centre asking for permission to discontinue the DBT experiment on May 28. The reason they gave was that the experiment violated the National Food Security Act, 2016. That leads to a range of other questions: If the state government knew the project went against the NFSA, why did it roll it out at all? In addition, despite the large protests, why did it take eight months for the government to make this recommendation?

Jharkhand’s PDS has come under question ever since Aadhaar-based biometric authentication was made necessary (and later revoked). Activists and families have alleged that a number of recent starvation deaths are due to the problems associated with Aadhaar linkage, though the government has denied this and come up with different reasons for the deaths. The fact that the government is continuing with the DBT experiment – despite people saying that it is making everyday lives much more difficult – is yet another symptom of its apathy, activists have said. In a statement released on Thursday, the Right to Food Campaign said,

“The government’s indifference towards people’s food insecurity is also revealed by its foot-dragging in the withdrawal of the “Direct Benefit Transfer for food security” pilot in Nagri block of Ranchi. By all accounts, the results of the pilot are disastrous. However, the Food Department is yet to roll back this pilot or compensate ration cardholders who are denied their legal entitlement to subsidised foodgrain in this ill-conceived initiative.

…The Right to Food Campaign demands immediate withdrawal of the “Direct Benefit Transfer for food security” pilot. It also demands the universalisation of the PDS in rural areas and inclusion of pulses and edible oil in the PDS – a promise made by the Food Minister himself. The government should also immediately remove the mandatory requirement of Aadhaar from PDS – and all other public services – and strengthen the grievance redress system to be established under the National Food Security Act.”

When The Wire reached out to Union food secretary Ravikant for a comment, his office said he is travelling and was unavailable. His comment will be added as and when it is received.