Justice for Jayaraj and Bennix Means Ending a Culture of Impunity

Cases of justice being served in police killings are the exception rather than the rule across India. 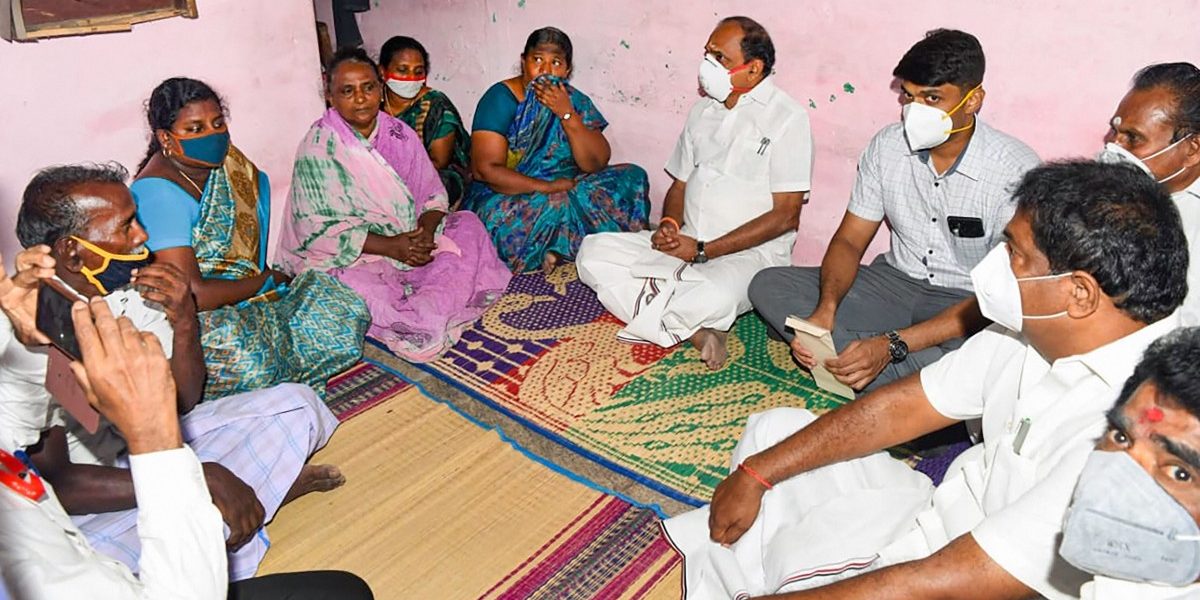 The brutal deaths of a father-son duo in judicial custody in Tamil Nadu’s Tuticorin district have sent shockwaves across the country and the globe. On June 18, Sathankulam police admonished J. Bennix (32) for keeping his small mobile phone and accessories shop open for 15 minutes beyond the state-government-imposed curfew of 8 pm the during the COVID-19. Bennix was alleged to have badmouthed the officers, and the angered police officers returned on June 19 to follow up.

An eyewitness to the assault told newspapers that the policemen held Bennix by his collar and pushed him towards the wall. At least five policemen including the sub-inspector and constables beat him black and blue. All this happened in front of Bennix’s friends.

The duo were so brutally assaulted by a team of policemen that they were soaked in blood. Relatives said that the police assaulted Bennix and inserted a baton into his anus, triggering uncontrolled bleeding; they kicked Jayaraj on his chest multiple times with their shoes. He was seen bleeding profusely even as he was in police custody at Sathankulam police station.

According to reports, the two had rectal bleeding which was so profuse that they had to change at least seven lungis when they were brought in a police jeep to the judicial magistrate. Given the coronavirus outbreak, the duo were made to stand at least 50 m away from the magistrate, who remanded them to judicial custody without examining them for injuries as he was required to do.

The duo were booked under Sections 188 (disobedience to order duly promulgated by public servant), 269 (action likely to spread disease), 353 (use of force against a public servant) and 506 (criminal intimidation) of the Indian Penal Code, and lodged in a local sub-jail. Their conditions deteriorated and they were only taken to hospital when it was too late.

Bennix succumbed to his injuries on June 22 and his father died the following morning. Bennix’s elder sister Persis, after seeing the bodies ahead of the autopsy, told reporters in Tuticorin on June 24 that they had been tortured to death and demanded justice.

Outrage across the nation

On social media following the incident, hashtags #JusticeForJayarajAndBennix and #JusticeForJayarajAndFenix started trending. Almost all the major political leaders of the country tweeted demanding an end to this form of police brutality and severe punishment for the offenders in khaki. Film stars, important celebrities and cricketers too prominently voiced their concern on social media.

It was only after the case gained publicity that the district police suspended sub-inspectors Balakrishnan and Raghu Ganesh and police constables Murugan and Muthuraj, against whom strong allegations have been raised. All police personnel in the Sathankulam station have also been transferred. The Sathankulam police inspector Sridhar was suspended. Four officers have been arrested.

As the demand for justice gained momentum, the Tamil Nadu government which was trying to brush aside the case as any other death due to illness, finally decided to offer compensation and government jobs to the family of the deceased and to hand over the case to the Central Bureau of Intelligence for a full probe. Reports around the incident reveal systemic failures on multiple levels, by police, magistrates and others.

In order to understand the flaws in the criminal justice system, the state government has decided to set up a high-level committee comprising the chief secretary, home secretary and the law secretary to overhaul and implement the Standard Operating Procedures to be followed by police personnel when dealing with such cases.

A history of police highhandedness and atrocities

Whilst lockdowns associated with COVID-19 and the global mobilisation following the death of George Floyd have served to focus attention on this case, the Tamil Nadu police is no stranger to such controversy. Indeed, it has gained notoriety for its brutality and highhandedness, normally unleashed against the hapless poor and marginalised sections of the society. Tamil Nadu is also notorious for its lockup deaths and police encounters.

Apart from numerous cases that have received little if any attention, there is a catalogue of high-profile incidents. Even where the offending officers have been brought to book, notably in the case of Dalit housemaid Karuppi who was tortured and killed, and the village of Vachathi (a tribal hamlet in Dharmapuri district) where police systematically raped women and destroyed and looted property, the cases were beset by obstruction, witness intimidation and harassment and took decades to reach a verdict.

Sadly, these cases of justice being served are the exception rather than the rule across India. A Human Rights Watch report notes that 591 people died in police custody between 2010 and 2015 according to the National Crime Records Bureau (the numbers of deaths in judicial custody is higher still), but not a single officer was convicted for a custodial death in this time frame. The report concludes that “Ultimately, police abuse reflects a failure by India’s central government and state governments to implement accountability mechanisms”. As in the case of Jayaraj and Bennix, it is frequently down to the families of the victims to seek judicial review and uncover the truth in the face of police denials and attempts to cover up what happened.

Nor is such obfuscation and foot-dragging limited to actions against individuals. A similar pattern may be observed in response to police use of force against groups. In 2018, for example, police fired into a crowd demanding the closure of the Sterlite Factory in Thoothukudi, killing 13 people and injuring a further 102. As with the deaths of Jayaraj and Bennix, established procedures and protocols were not followed and police were accused of using disproportionate force. A one-man commission has been established to probe into the events, but no officers have been arrested in connection with the shooting though activists have been hounded by the police.

When those facing violence are marginalised and powerless, the response from the state can shift from apathy to exacerbation. When police opened fire on unarmed Dalit protestors in Paramakudi in 2011, killing seven people, for example, the police were exonerated by the chief minister almost before the smoke had cleared. The Sampath Commission set up to inquire into what happened duly echoed this position, arguing that the police had acted in self-defence, but it did call the actions of police in beating arrestees “disgraceful and at variance with the prescription of the Police Standing Orders”. Even this criticism was unacceptable to the state government which rejected these “disparaging remarks“. According to the Campaign Against Torture, this is part of a wider pattern in which ‘Dalits and indigenous peoples remain extremely vulnerable to torture’.

A culture of impunity

The National Human Rights Commission routinely reports on arbitrary detentions, police violence and torture. Its 2018 report stated that “A lack of accountability for misconduct persisted at all levels of government, contributing to widespread impunity”. This is compounded by the fact that the government has yet to ratify the Convention Against Torture.

Indeed, authorities seem more eager to silence debate around these issues than to address them head on. When journalist Aakar Patel recently responded to the global protests spurred by the killing of George Floyd by tweeting “We need protests like these from dalits, muslims, adivasis, poor and women”, the police in Bengaluru issued an FIR against him.

Poor legal protections and poor implementation of those that exist perpetuate police excesses, but as laws against untouchability demonstrate, legal reform in and of itself is inadequate to effect meaningful change. Alongside such measures, there is a need to address the cultural legitimisation of police violence. It is not just that excessive use of force by the police is an ‘open secret’ – staple of film plots in both South and North India – it is often glorified on the silver screen.

Interestingly, some actors and directors are now voicing regret for their past celebration of violent cops. The messages imparted through popular culture are reinforced by politicians, who are often quick to praise the police for swift action in ‘encounters’ (often extra-judicial killings). The upshot, Shubhangi Misra argues, is that “as a public, we expect and support police violence”.

Whilst public support may help explain the lack of outrage at the endemic nature of police violence, it is not critical to the functioning of the authorities. As K.S. Subramanian notes, independent India inherited a state apparatus from the British Raj which was insulated, and stood apart, from society. The model of policing derived from the Royal Irish Constabulary and emphasised control and order rather than policing by consent, and the legacy of this can be witnessed today.

In her fine-grained ethnographic analyses of policing in Uttar Pradesh, however, Beatrice Jauregui notes how the police are simultaneously integrated into the society they serve. All too often, the police have been insufficiently divorced from the communities they serve rather than the reverse.

One of the under-reported aspects of the Jayaraj and Bennix deaths is the caste angle to the violence. Whilst much police violence is directed against minorities, Ravishankar notes that the Sathakulam case was bound up in inter-caste rivalry.

The police, this reminds us, are tied into networks of caste and community and carry their prejudices with them. Following the Southern Districts Caste Clashes that shook southern Tamil Nadu between 1995 to 1998, a government-appointed Commission found out that members of a particular dominant intermediate caste was prevalent in the police and suggested that postings should not be made in that manner.

It further suggested that members belonging to the three clusters of castes that were involved and affected in the clashes should not be posted in the region and members of castes from other regions should be posted there to avoid potential misuse of power. Had these, and numerous other recommendations been followed then we may not, now, be agonising over yet another death in custody.

Ian Loader argues that the police are “one of the principal ways in which the … nation and its qualities are represented”. Where the police are seen as distant and unaccountable, however, as Ellison and Smyth note by reference to Northern Ireland, then “policing can promote feelings of belonging and security for some’, but ‘it can also deny recognition to others”. This has held true too often in the Indian context, where the feelings of belonging have mapped onto caste divides.

Writing in 1936, Ambedkar argued that: “Caste has killed public spirit. Caste has destroyed the sense of public charity. Caste has made public opinion impossible. A Hindu’s public is his caste. His responsibility is only to his caste. His loyalty is restricted only to his caste”. Human Rights reports and we have seen how caste categories and identities continue to shape localised policing. Caste disputes are said to have been behind a spate of deaths in police custody in Thoothukudi district.

Also read: The Only Solution Is to Defund the Police

What the litany of cases leading up to the custodial killing of Jayaraj and Bennix reveals is a police force that cannot be held to account. The repeated failure to hold officers to account for blatant breaches of their own codes of conduct can only serve to erode the trust and legitimacy upon which democratic policing depends. The result is force that is divorced from the people, operating as a law unto itself. As Baljeet Kaur argued in Economic and Political Weekly, “India’s silent acceptance of torture has made it a “public secret”.”

The global attention captured by these horrific murders is shining a welcome light on this murky world, but unless it can feed into wholesale structural reform that allows for judicial oversight of police actions, overhauls training programmes to emphasise human rights, and oversees an end to a culture of impunity, then there will be many more like Jayaraj and Bennix.

Dr Hugo Gorringe is Co-Director of the Centre for South Asian Studies in Edinburgh. He is the author of Untouchable Citizens (Sage, 2005) and Panthers in Parliament (OUP, 2017).