Ground Report: Agony and Casualties in the Valley in the Immediate Aftermath of Shutdown

“My wife didn’t throw a stone," said 23-year-old Sameer Ahmad, "Why was she hit with pellets?" 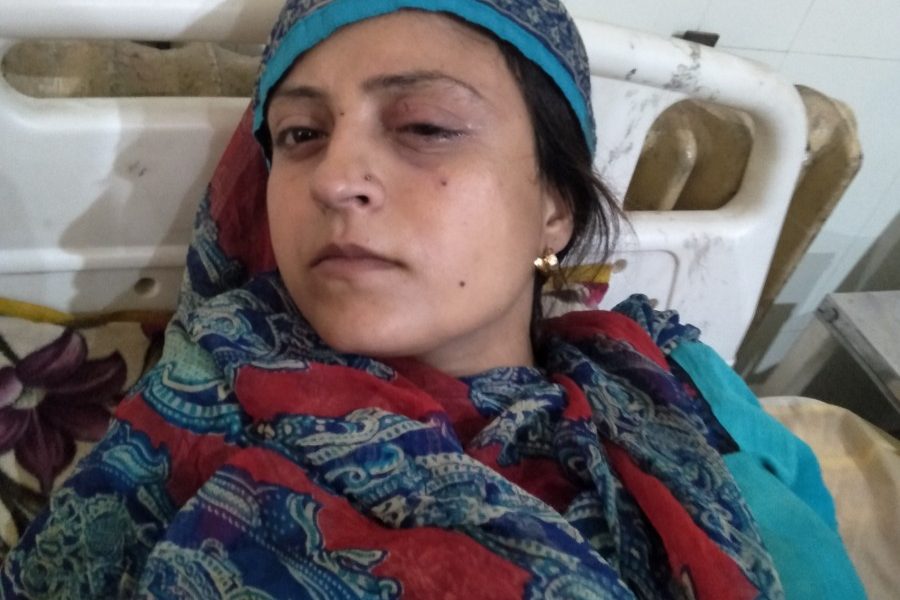 Rafia Bano, 23, from Srinagar was shot with pellets in the courtyard of her house. Photo: Quratulain Rehbar

Srinagar: The Central government’s announcement August 5 scrapping the special status accorded to Jammu and Kashmir under Articles 370 and 35A of the constitution was preceded by the severing, overnight, of all mobile and internet connections.

The next morning, the 8 million residents of the Valley woke up to strict restrictions on their physical . movement as well. How did families cope with this situation, especially those who had medical conditions?This reporter spent three days in Srinagar’s Shri Maharaja Hari Singh (SMHS) hospital documenting the situation.

On August 6, a day after the centre read down Article 370 and bifurcated the state, civilian movement was heavily restricted and most roads were deserted. In the event of a medical emergency, a patient had to either display an OPD ticket or a curfew pass for the security personnel to allow him or her to proceed.

Srinagar’s SMHS hospital was barricaded from all sides as the CRPF and the J&K police laid barbed wires near the Fateh Kadal bridge and blocked the entrances to the hospital.

Amongst the crowd of people sitting inside and outside the premises of the hospital, lay an unattended dead body. Soon after, an old man, visibly in despair, rushed towards it – the unattended body was of his wife who had died due to a heart attack in the morning.

The 75-year-old man, Mohammad Akbar Chopan, had earlier come in with his 35-year-old daughter, Afroza Jan for his wife’s treatment. Chopan, a resident of the Khan Sahib area in central Kashmir’s Budgam, had run out of money. He broke down and said, “I have to take my wife home.” But there was no ambulance present in the hospital.

“Right now, we cannot ask the authorities to help us,” said a young boy standing in the crowd. “We have to do it ourselves”. Chopan’s daughter stared at her mother’s body, wrapped in a blue sheet, lying unattended at the hospital’s entrance. Chopan hugged his wife’s dead body and said, “Is there anyone who can take us home?”

A police officer in civilian clothing started to collect money from the crowd. Almost everyone, including those who had been stranded since morning, contributed and soon a sum of Rs 4,000 had been collected.

After a few minutes, someone managed to bring a private ambulance from the ‘Help Poor Voluntary Trust’ to take Chopan and his wife’s body. 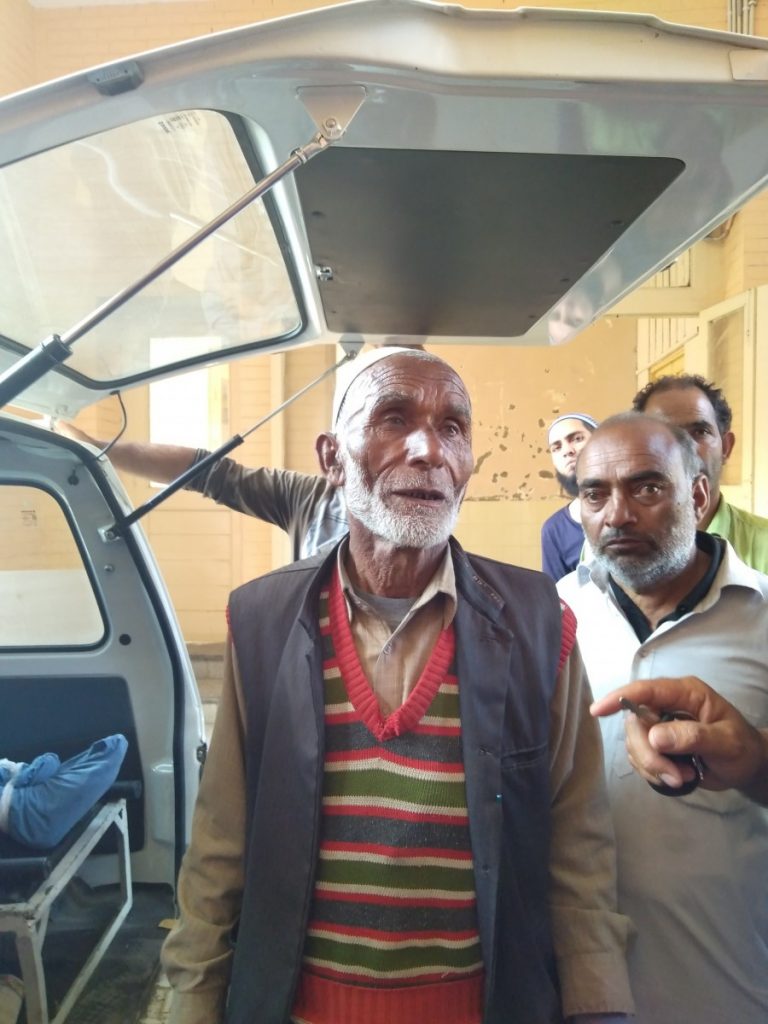 Mohammad Akbar Chopan from Budgam stands near the private ambulance in which his wife’s body was taken home. Photo: Quratulain Rehbar

Within the hospital premises, several patients and attendees from different parts of the Kashmir Valley including Tral, Budgam, Shopian and Kulgam, had been stranded since the morning after the authorities had discharged them. Unable to leave the hospital due to the restrictions, people had been waiting for several hours for ambulances to take them home.

42-year old Nahida Bano, a resident of Poonch district, had not been able to contact her family since the clampdown on communications in the Valley. “I wanted to call my family because I’m short of money,” she said. Her daughter, who had been admitted in the hospital for the past 15 days, was discharged by the hospital on Thursday morning and ordered to be shifted to the Bone and Joint hospital in Barzullah, Srinagar.

As she waited within the hospital premises for an ambulance, Bano said, “I know the situation is bad but I have to be with my daughter. We are waiting for the ambulance so that we can go there [Barzullah]”.

Meanwhile, another lady was distributing bananas amongst members of her family who hadn’t eaten anything since morning. Next to them, Nazira Ban, 46, a resident of South Kashmir’s Tral district, sat over a sheet outside the hospital. She had been a patient at the hospital for the past 14 days and was waiting for an ambulance since morning, which was “her last hope to reach home”.

On August 7, near SMHS hospital’s emergency ward, 18-year-old Aijaz Ahmad from South Kashmir’s Pulwama district, displayed the grave injury marks on his back.

Lying on a stretcher, surrounded by his family and friends, he said that over a dozen youths, including shopkeepers, had been thrashed by government forces in Pulwama’s Arihal village after a few young boys threw stones in the village.

Akeel Dar from Nawab Bazar in Srinagar, one of the first to be injured by pellets since the August 5 decision. Photo: Quratulain Rehbar

A few of them had been shifted to the Bone and Joint hospital in Barzullah, Srinagar, while others were brought to SMHS hospital.

Ahmad alleged that around 12:30 pm, after a few boys resorted to stone-pelting, the Rashtriya Rifles (RR)  started to barge into homes in the locality, pulling men out onto the streets. “They asked us to name the stone-pelters but we had no idea,” said Ahmad and added, “We were in our houses.”

Another boy, Aftab Khan, wearing white clothes with blood-stains visible on his sleeves, lay next to Ahmad, unconscious.  “He was given electric shocks,” his mother said. Out of fear, none of the young boys were willing to reveal their names. “This is a very sensitive time,” said Khan’s cousin and added, “Please don’t write our names, or change them.”

He further went on to say, “The security forces’ personnel came to our house, dragged my cousin onto the road and started beating him. We had no idea why they were doing it.”

Khan, who is currently studying B.Tech in Bengaluru, Karnataka, came home on August 6, fearing a communication blackout due to the prevailing circumstances in the Valley. While being thrashed, Khan was repeatedly asked, “Who is giving you money to throw stones?”

On August 8, 18-year-old Waseem Dar lay on a hospital bed in ward number 8 of SMHS hospital. Groaning in pain, with both of his eyes bleeding and a pellet stuck in his forehead, he said, the security forces’ personnel “shot pellets at me”.

On August 5, after restrictions had been imposed, Dar stepped outside his home in Nawabazaar Chowk at 11 am to buy milk. “I never knew this would happen with me,” he said.

When one of his friends put eye-drops into his bloodshot eyes, he didn’t shout but pulled onto his hair with his right hand in pain. His mother, who sat beside him, looked away from her son. “I cannot bear to see his eyes,” she said.

According to the administration, 23 pellet victims, from different districts in the Valley, came to the hospital between August 5 and 8.

Dar had been receiving treatment in the hospital for three days. Doctors then told him to undergo another operation on 15 August. “I cannot see from my right eye,” he said and added, “While from my left eye, I can only see blurred images.”

On the bed opposite to Dar, Parveena Bano was crying incessantly. Her 1son, Irfan Ahmad had been struck by pellets in his left eye. “He had gone outside his home [in Srinagar] for tuitions at 4 pm,” she said. “If he didn’t have his exams after Eid, I wouldn’t have let him go. They ruined his career,” she said.

Also read: The ‘Amateur’ Tech That Could Penetrate the Kashmir Blackout

As people in the ward around her tried to console her, someone said, “He is her only son”.

On August 6, scores of people had been injured in clashes with government forces in the Habbak area of Srinagar. Amongst them was 21-year-old Dawood Ahangar, a labourer from Srinagar’s Dargah area. With a bandage wrapped around his eyes, he said he had “got six pellets in his left eye”.

Sameer Ahmad, 23, entered ward number 7 of SMHS hospital clutching onto his wife’s OPD ticket with his right hand. His wife 22-year old Rafia Bano may have been the first female pellet victim from Srinagar. Wearing a blue frock shalwar, she sat on a bed, with her eyes half-opened; pellets had hit her left eye.

After the clashes between young boys and government forces in the Nowhatta area of Srinagar, Bano had stepped out into her courtyard. “A policeman directly hit her,” alleged her husband, Ahmad.

He took out his phone to show a recent picture of Bano, wearing a pink scarf and red lipstick and said, “I had clicked this picture a few days ago.”

“My wife didn’t throw a stone,” he said, staring at the picture with moist eyes. “Why was she hit with pellets?”

Doctors intend to operate on her on August 14. Standing next to his mother, her 5-year-old son innocently pulled her hand and repeatedly said, “Why don’t we go from here? We will go home.”

The article has been edited to correctly identify Akeel Dar, a pellet injury victim from Srinagar’s Nawab Bazar. An earlier version had wrongly identified him as Aijaz Ahmad from Pulwama.

Quratulain Rehbar is a Kashmir based journalist working with the Kashmir Walla magazine.