"...the Government of India['s actions in Jammu and Kashmir] exhibit a complete lack of respect for constitutionalism, secularism, and democratic values." 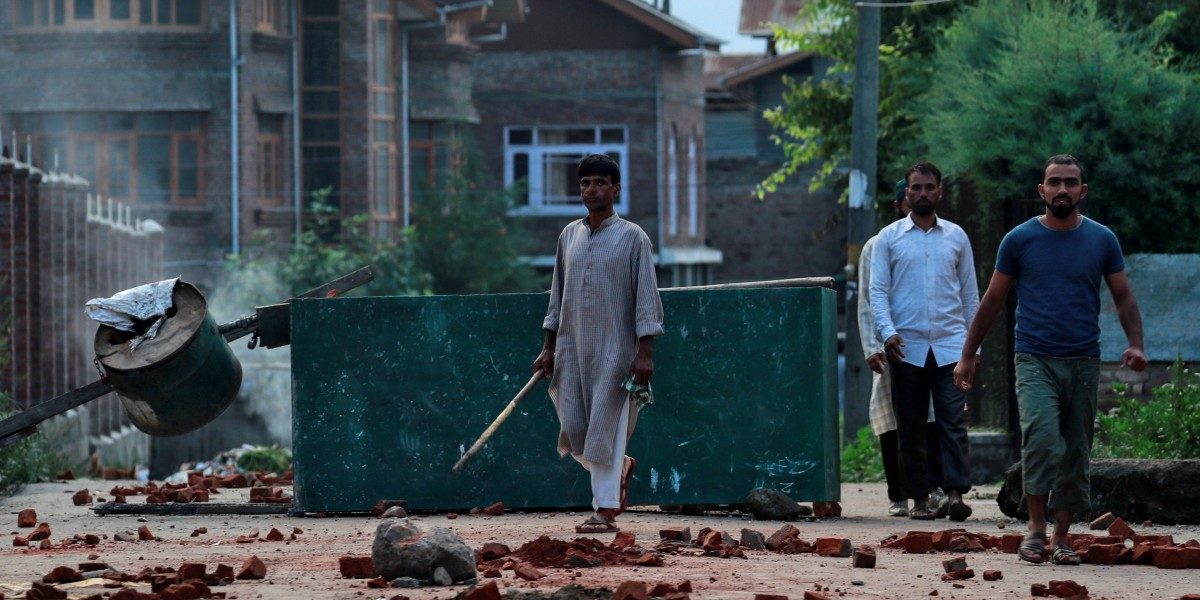 Kashmiris walk past a blockade put up by residents to prevent security personnel from sealing a mosque ground ahead of the Eid-al-Adha prayers during restrictions after the scrapping of the special constitutional status for Kashmir by the Indian government, in Srinagar, August 12, 2019. Photo: Reuters/Danish Siddiqui

New Delhi: More than 250 scholars, artists, activists and others have issued a statement on August 15 in solidarity with the people of Jammu and Kashmir, and the “inhuman clampdown” they have been subjected to.

The statement also condemns the reading down of Article 370, a “historical understanding between the people of Jammu and Kashmir and the Indian state”. The signatories also talk about the reports that protestors have been fired upon, and the clampdown on people’s movement and communication.

“These actions of the Government of India exhibit a complete lack of respect for constitutionalism, secularism, and democratic values. This does not bode well for India’s people, who have, uniquely in South Asia, benefited from decades of democratic rule,” the statement says.

The full statement and list of signatories is below.

The undersigned citizens of and friends of South Asia, who stand in solidarity with all freedom-loving citizens of this region, release this statement on Jammu and Kashmir.

We are deeply concerned by recent political developments in Jammu and Kashmir. We are distraught that the people of this beleaguered land, who have lived with violence and political disempowerment for decades, have now been subjected to a further erosion of their rights under the intensified military suppression of the last ten days.

Article 370 of the Indian Constitution represented a historical understanding between the people of Jammu and Kashmir and the Indian state. On 5 August 2019, not only was Article 370 abrogated, but the very statehood of Jammu and Kashmir was abolished, bringing the region under New Delhi’s direct rule. The manner in which these abrogations were accomplished, through executive order and in the absence of a state legislature, is a betrayal of the people of Jammu and Kashmir, whose elected representatives were never consulted. This is a sharp departure from democratic governance, and the constitutional validity of these decisions has been rightfully challenged.

Also read: Journalist Detained in Kashmir; Family in the Dark About Charges

We condemn the curtailment of civil liberties in Jammu and Kashmir: the blackout of telecommunications and internet services; the severe restrictions on media and on the freedoms of movement, peaceful assembly, and protest; and the violent suppression of demonstrations. These are all violations of international human rights obligations, including the International Covenant on Civil and Political Rights (ICCPR), which India ratified in 1979.

We are alarmed by credible media reports of security forces having opened fire on peaceful protestors and disturbed by the denials issued by the authorities, who have gone on to accuse journalists of fabrication. We are gravely concerned by the Government of India’s silencing of voices of dissent, and detention of social activists, lawyers, journalists, and human rights defenders. We condemn the Government of India’s use of majoritarian populism to perpetuate a climate of fear across the country.

These actions of the Government of India exhibit a complete lack of respect for constitutionalism, secularism, and democratic values. This does not bode well for India’s people, who have, uniquely in South Asia, benefited from decades of democratic rule. We are apprehensive of India’s future as a democracy and the implications that this degeneration will have on its population of 1.2 billion as well as on the rest of the subcontinent.

In the middle of August, when we are meant to celebrate independence from colonialism, we condemn this regression towards despotic rule. We stand in solidarity with the people of Jammu and Kashmir, and with people across India and South Asia who aspire to peace, prosperity, and fundamental freedoms.