While fewer killings have been reported in the first half of 2020 compared to the two previous years, there has been an uptick in the destruction of civilian properties and ceasefire violations. 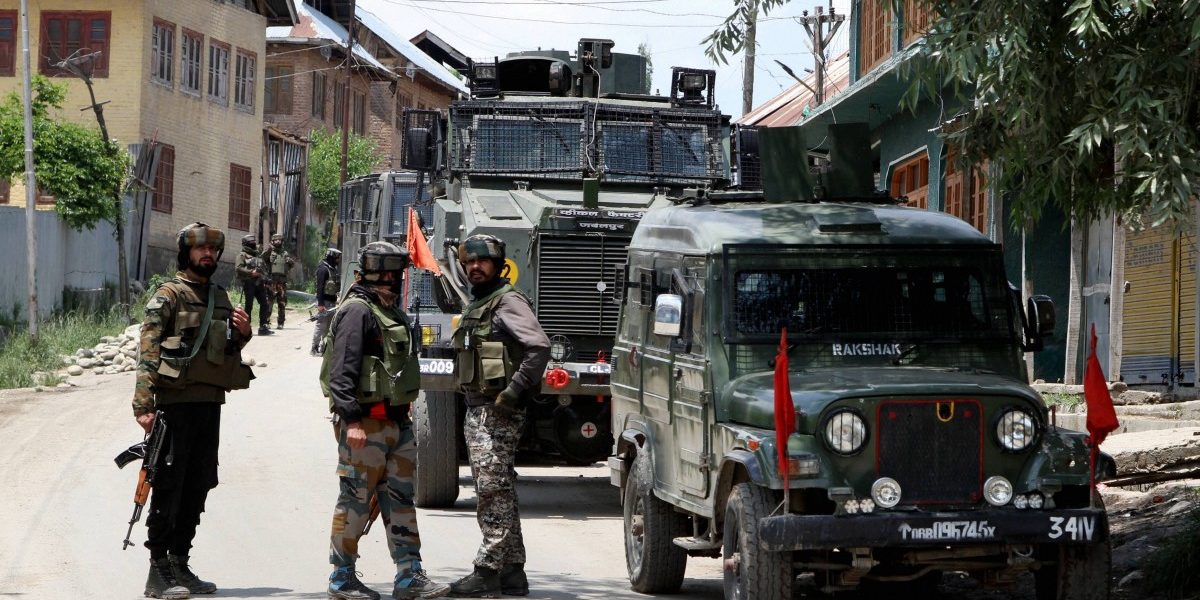 Srinagar: Despite the Central government’s claim that the revocation of Jammu and Kashmir’s special status would usher in a “new era of dawn” in the region, a report by human rights organisation Jammu and Kashmir Coalition of Civil Society (JKCCS) has shown that even one year after that move, there has been no let-up in conflict.

In its biannual report about the human rights situation in the region, JKCCS has revealed that Kashmir saw 229 killings in 107 incidents of violence during first six months of this year, besides an uptick in the destruction of residential properties during gunfights between security forces and militants.

The BJP government had taken the unilateral decision to dilute Article 370, asserting the move would “end militancy” in Kashmir and bring “peace” to the region, claiming the constitutional provision of special status to J&K was “strengthening separatist narrative” in the Valley.

The report has, however, laid bare the ground realities and punctured the government’s peace claims. With uncertainty about the future of the situation in Kashmir only growing by the day, the violence which has gripped Kashmir for the past three decades appears far from over.

An analysis of data provided by JKCCS also shows that while the number of killings reported in the first half of 2020 is lower than the previous two years, when seen together with reports of increased destruction of civilian property and more violations of ceasefire at the border with Pakistan, there can be no denial of heightened conflict. 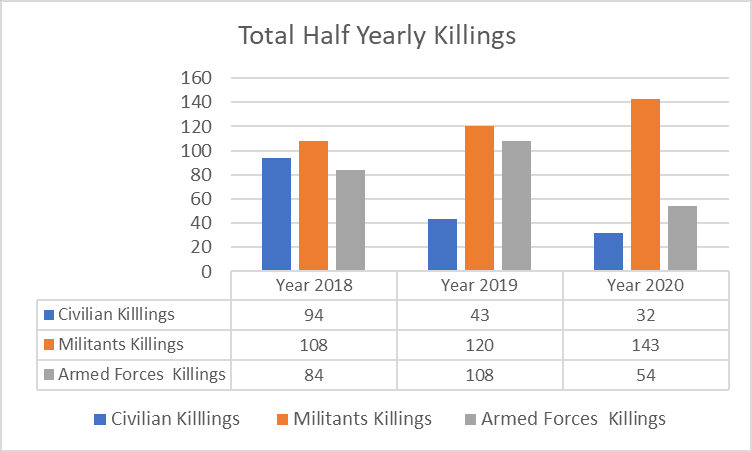 Data from the past decade also shows that the violence reached a trough in 2012, when 143 killings were reported in the entire year and has been escalating ever since. In fact, the number of killings reported during the first six months of 2020 is much higher than the total number of killings that were reported by JKCCS in five years of the previous decade (2011-2015). 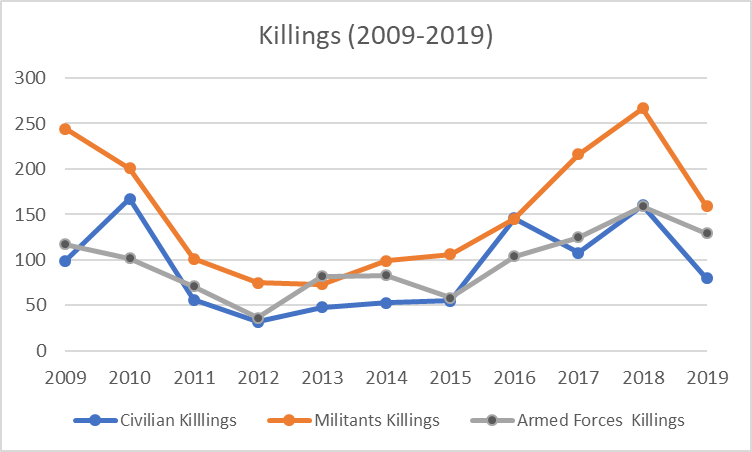 Also Read: The Indian State Has No Plan for Jammu and Kashmir or Its People

But at the same time, the trend of educated youngsters joining the militancy has continued. A senior police official, quoting intelligence inputs, told The Wire that around 85-95 youngsters have joined the militant ranks from January 1 to July 30 this year. Last year, as per the official figures, around 141 youth had picked up arms.

In June this year, a PhD scholar from the Bemina locality of Srinagar, Hilal Ahmad Dar, who had gone trekking with his friends, went missing. After days of search, the police finally confirmed that he had joined militancy.

Similarly, videos have emerged on social media in which two families from Kupwara and Bandipora districts appeal to their “missing” sons to return home. In the past, such appeals have ended with the youth joining militancy. Recently, a 48-year-old man and father of a slain militant from Tral town of south Kashmir joined the militancy.

“Every single argument that the government had given for diluting Article 370 has proven to be false,” said Ajay Sahni, executive director of New Delhi-based Institute for Conflict Management.

He said the data shows that conflict continues in Kashmir, as does recruitment by militants, despite the constant success of the security forces during counterinsurgency operations.

“We’re not seeing any relief a common man would expect, largely because the political processes have been broken down. Today, anyone in Kashmir who has a grievance is left with only two choices – either shut himself in his home or join the militancy,” Sahni claimed. 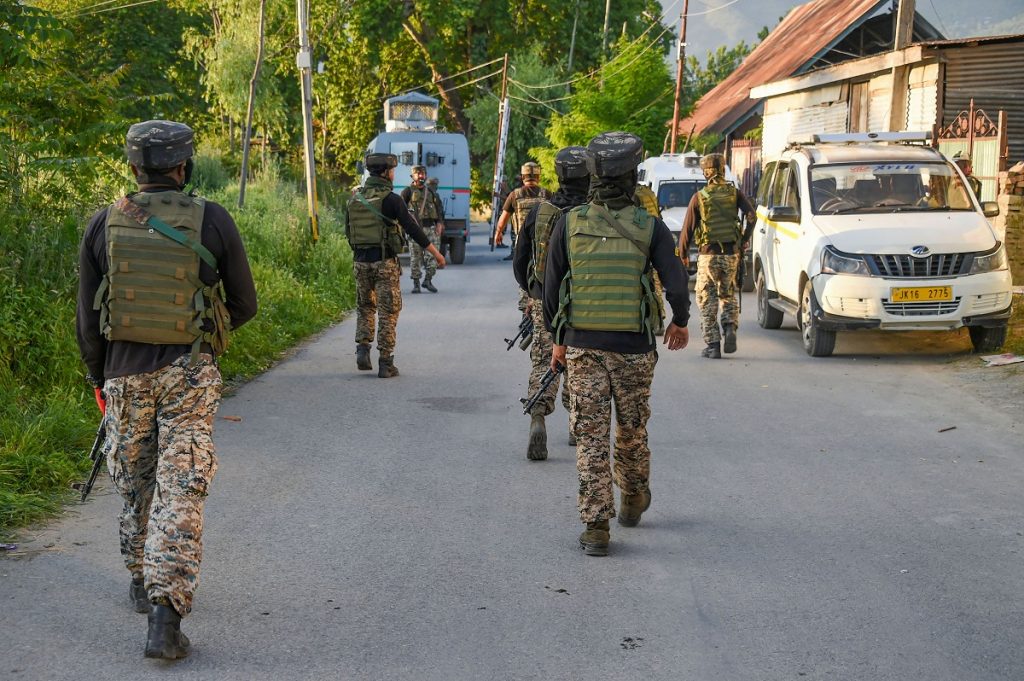 Members of the security forces during a search operation after militants attacked a BSF picket at Pandach in Ganderbal district of Central Kashmir, May 20, 2020. Photo: PTI/S. Irfan

Ever since the abrogation of J&K’s special status, both the Line of Control (LoC) and the International Border (IB) have witnessed an escalation in ceasefire violations.

From January to June this year, around 2,319 ceasefire violations have been recorded, almost double the number of violations recorded during the corresponding period last year (1,309).

On the other hand, from January 1 to June 30, at least 107 cordon and search operations (CASOs) have been carried out by the security forces across J&K.

The 26-page JKCCS report highlights a rise in the destruction of civilian properties, including residential houses, by the security forces during encounters or while dealing with protestors.

At least 48 residential houses were destroyed between January 1 and June 30, most of them during the lockdown imposed to contain the spread of the novel coronavirus, rendering many families homeless.

In comparison, only 20 civilian properties were destroyed during the first half of 2019, as per the data provided by JKCCS. 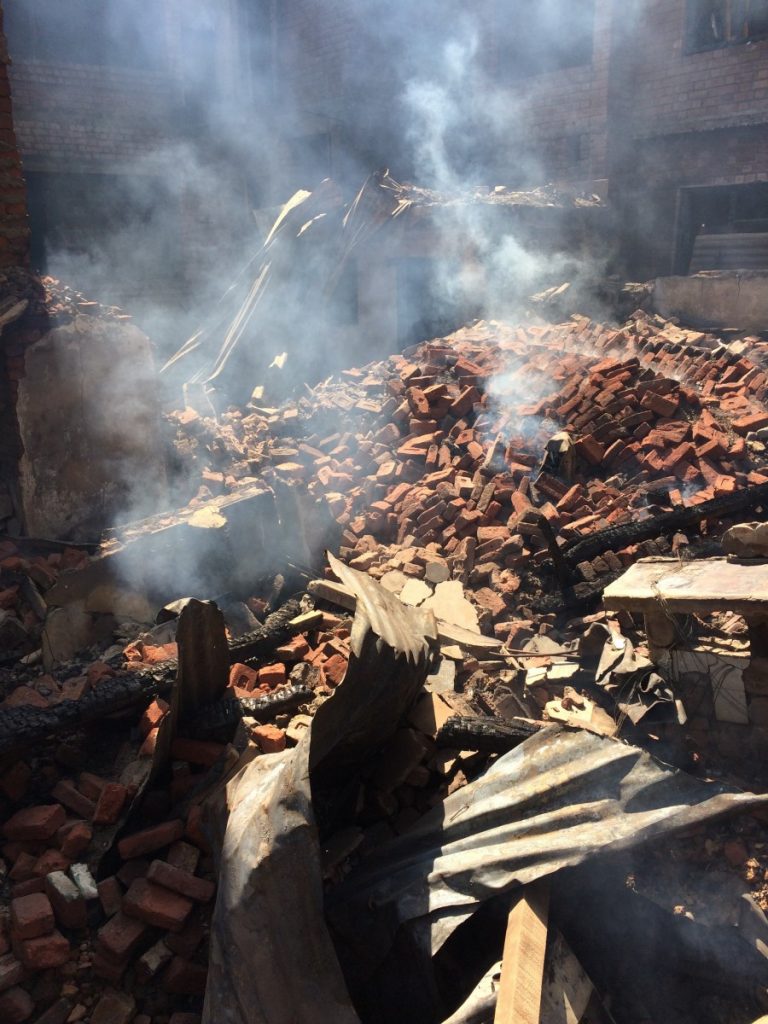 The site of an encounter in downtown Srinagar, when houses were destroyed. Photo: Junaid Kathju

In his televised address in August last year, Prime Minister Narendra Modi had defended the move to dilute Article 370, revoke Jammu and Kashmir’s special status and bifurcate it into two Union Territories. “This act of the government will usher in a new dawn in the region and help in the development of the youth there,” he had said.

But the ground situation belies the government’s claims. That even after the passing of a year since the Centre’s decision, the ban on high-speed internet continues sums up the siege-like atmosphere in the Valley.

Also Read: As J&K 4G Ban Is Extended, SC Should Adjudicate and Not Wait For Restoration

“Political leaders continue to be either in jails or under house arrest. Youngsters with a political view are jailed hundreds of miles away from their homes. Civil liberties and the freedom of expression have been curtailed and today, Kashmir has the highest deployment of security forces,” said Masoodi. “And in spite of all these drastic measures, the government of India is uncertain of the next move on Kashmir while the uncertainty grows and killings and violence continue unabated.”

What is more worrying is that there seems to be no imminent relief in sight for people from the prevailing uncertainty.

Former chief minister Mehbooba Mufti is the most high profile among leaders who have remained in detention since the abrogation of the special provisions of Article 370 on August 5, 2019.

The entire political process that could have been harnessed to take advantage of the declining number of militants stands eroded now. “A political process was subverted to implement ideologically driven decisions which were based on partisan political interests and had nothing to do with the development of Jammu and Kashmir and its integration or counter-terrorism,” said Sahni.

There are now apprehensions that violence could worsen in the months to come. “The government has been so hostile towards the people that every Kashmiri feels imprisoned. When you suppress people, civil society and saner voices and undermine normal politics, then the only recourse left is violence,” said political analyst and professor Noor M. Baba. “You may be able to control the situation through coercive means for some time, but it will not be possible in the longer term.”