Exclusive: 'The Arrest Is an Attempt to Break Her Spirit,' Says Mehbooba's Daughter 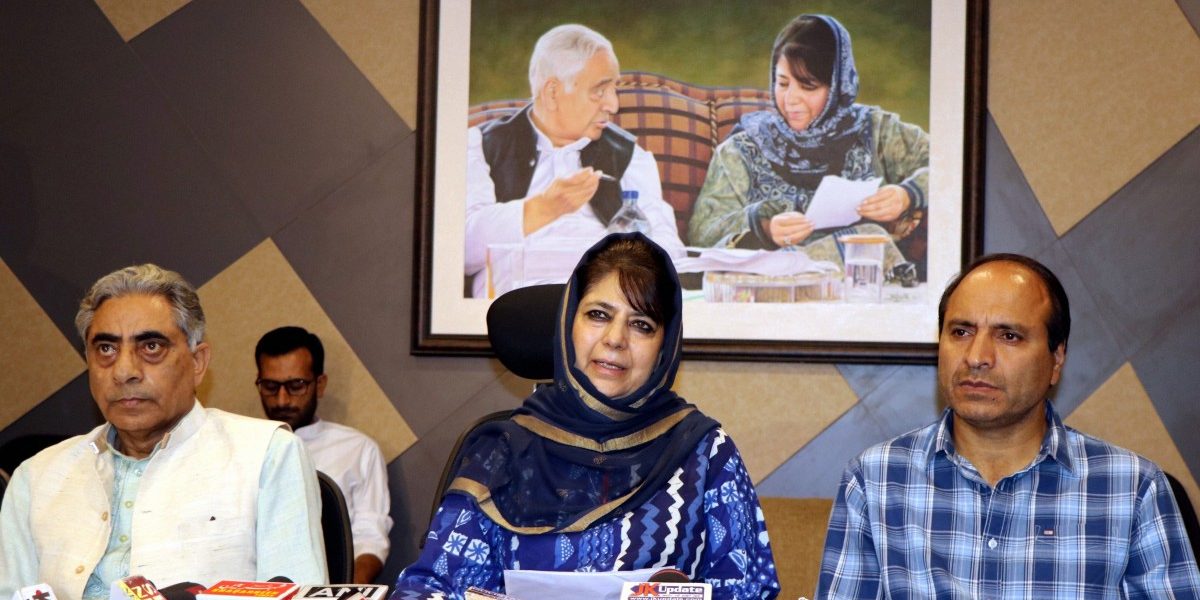 Former J&K chief minister Mehbooba Mufti and other PDP leaders at a press conference in Srinagar on August 2. Image: PTI

Days after the Centre’s crackdown in Jammu and Kashmir, home minister Amit Shah revoked the special status of the state without any consultation with regional political party leaders. Mehbooba Mufti and Omar Abdullah, among others, were instead kept under house arrest. Both of them have now been detained and have been lodging in Hari Niwas.

To talk about these developments, former J&K chief minister Mehbooba’s daughter spoke to The Wire. Like others in Srinagar, Mehbooba’s daughter Iltija Javed doesn’t have access to Twitter, Facebook or even the telephone. But she did find a way to reach us, and get her story out.

Full transcript of the audio:

What exactly is happening in Srinagar at the moment?

The situation is very tense in Kashmir. People here began getting suspicious ten days ago that the Central government was about to take a drastic step.

What the people were most afraid of has happened. What they thought was going to happen, has happened. But the manner in which it has happened is very wrong. Like thieves – overnight – Article 370 has been scrapped.

Now the atmosphere here is that of fear. I’m sure after what happened today (August 5), people must be very angry. But it’s another matter that they are not even being given a chance to express that anger. There is a lot of fear and I’m sure people are really angry as well about the manner in which their special identity has been snatched from them.

The reason why she’s now been put under detention [Mehbooba Mufti] and taken away from her family is so they can break her spirit. But I want everybody to know that my mother is a very strong woman, and they might be able to harm her physically or try to pull her down, but she’s too strong for this.

Do you have any information about your mother who was taken to Hari Niwas when we last heard about her?

Mehboobaji was taken away from here at around 6-6:30 pm. A team of about 4-5 people came and gave an arrest warrant – it was paper, I think it was a warrant. They gave her about 15-20 mins to pack her things and leave with them. They took her to Hari Niwas. As of now, I don’t know anything. The only thing I know is that she is there and I have heard that Omar saab is also lodged there.

Apart from that, I have no information and because communication is absolutely down here, we are unable to make any connection. It feels as if we’re not in Kashmir but rather in an open-air prison.

Who got in touch with you before taking your mother Mehbooba Mufti away?

Mehbooba ji was given a hint in the morning itself that some people would come to take her away and that she may be kept under detention. I don’t know why this was necessary because she was already under house arrest. Nobody was being allowed to visit or leave the house. The house was locked from the inside. But she was told that a team may arrive to take her and she may be placed under detention.

Personally, I am not in touch with anyone in Delhi except some journalists. I think the entire country and the international community should know what is happening with people here and the mistreatment being meted out to them. They’re being treated like animals. They are being kept at home – they are unable to communicate or go out. In case of an emergency, there is no helpline. How can there be a helpline when all the numbers are down?

Nobody has any idea what to expect and at a time like this, everybody is very troubled. Realistically speaking, I don’t know how long this curfew can be imposed, because, at some point, normal life has to resume. The normal life of regular Kashmiris has to start sometime.

I don’t know how long this will last but as long as it is kept, the situation will remain very tense.

What are your concerns about what happens next?

One thing is very clear is that whatever has happened has been very well-thought-out and obviously meant to consolidate their positions even more.

The apprehension is that in this attempt to put Kashmiris down, to vilify and demonise them, the people of the region will be persecuted. Obviously, it doesn’t seem like the people enjoy even basic human rights or civil liberties right now. There is a complete clampdown.

So I am worried about what is going to happen and for how long people will be kept like this. On a personal level, I am worried that, to show the entire country that they are punishing the mainstream people, I don’t know how long they will keep my mother under detention. I don’t think that apart from the house arrest, there was a need to keep her in isolation or solitary confinement.

So because of all these actions, it seems they [the Central government] are getting highly insecure and given the decision they have taken, they are apprehensive about what will happen once the people are let free and that leaders like Mehboobaji will mobilise people and they don’t want that.

I only hope that my mother and the people of Kashmir stay safe. And my apprehension is that in this attempt to demonise Kashmiris, their safety is being compromised and everyone is highly disturbed. I can only hope and pray that Inshallah everyone remains safe. But the way in which people have been treated, I don’t know. No assurances have come till now. In fact, tyranny is only increasing.