One Year On, No Accountability for Delhi Police's Terrifying Impunity at Jamia

Where the investigating agency itself stands accused, ordinary remedies in law have little chance of working.

Police officers chase protestors during a protest against the Citizenship Amendment Bill, a bill that seeks to give citizenship to religious minorities persecuted in neighbouring Muslim countries, outside the Jamia Millia Islamia University in New Delhi, India, December 13, 2019. Photo: Reuters/Adnan Abidi

A year after the police violence at Jamia Millia Islamia (JMI), the official narrative remains stubbornly resistant to reality.

The police assault on Jamia on December 15, 2019, was documented in-depth and yet mandatory procedures for investigating police brutality have not been followed. The official narrative has succeeded in shielding police impunity through a haze of paltry excuses – not entirely unexpected when the police are tasked with investigating themselves.

This resulting impunity formed the backdrop for several instances of police excesses in Delhi, often in public view and in front of cameras. During the lockdown, many students from Jamia were arrested under draconian anti-terror laws by the same agency accused of perpetrating violence on their peers. The complaint which led to these arrests, claims that these students orchestrated riots in North-East Delhi in February, to spread ‘propaganda’ that widespread atrocities are committed against minorities in India.

As has been well-documented in media coverage and fact-finding reports, the Delhi police brutally attacked students on the Jamia campus in December. Around a month after the incident, JMI filed a case seeking that an FIR be registered to investigate the police’s unlawful actions on December 15.

In its response, the police claimed it had to use moderate force and tear gas inside the campus to save innocent students and disperse and apprehend rioters, who they said were using the campus as a cover to pelt stones at them despite warnings issued over a loudspeaker telling them to stop. If an unlawful assembly defies police commands to disperse, the police is authorised to use force.

But, as made clear in the Punjab Police Rules (PPR) and Delhi Police Standing Orders (particularly No. 72), the police must act “with utmost restraint and patience, taking care… that there is no loss to life and property.” As per Rule 14.56 of the PPR, the object of the use of force is to quell a disturbance of the peace… no ulterior objects, such as punitive or repressive effect, shall be taken into consideration.” Moreover, the degree of force used has to be the minimum necessary to disperse the crowd and make arrests; the duration has to be as limited as possible; and the least deadly weapon possible should be used.

What happened in Jamia last December?

In Jamia, instead, reports document that multiple students suffered injuries on their heads, deep gashes and bone fractures from police beatings, showing little effort to ensure minimum damage. One student lost vision in his left eye, and another had to get rod transplants in his legs. The beating was large-scale and indiscriminate – numerous testimonies corroborate how lathis were used on anyone within striking range, including university guards and female students as they tried to shield male peers.

Many recounted how students were lined up on the stairway in the library and the lawn right outside, and repeatedly hit by officers. Communal abuses accompanied the beatings, with students being called ‘aatankvaadis‘, ‘jihadis‘, ‘deshdrohis‘, ‘katwas‘ and worse. In addition, many students describe how the police wrecked library windows, CCTV cameras, and student vehicles parked on campus. 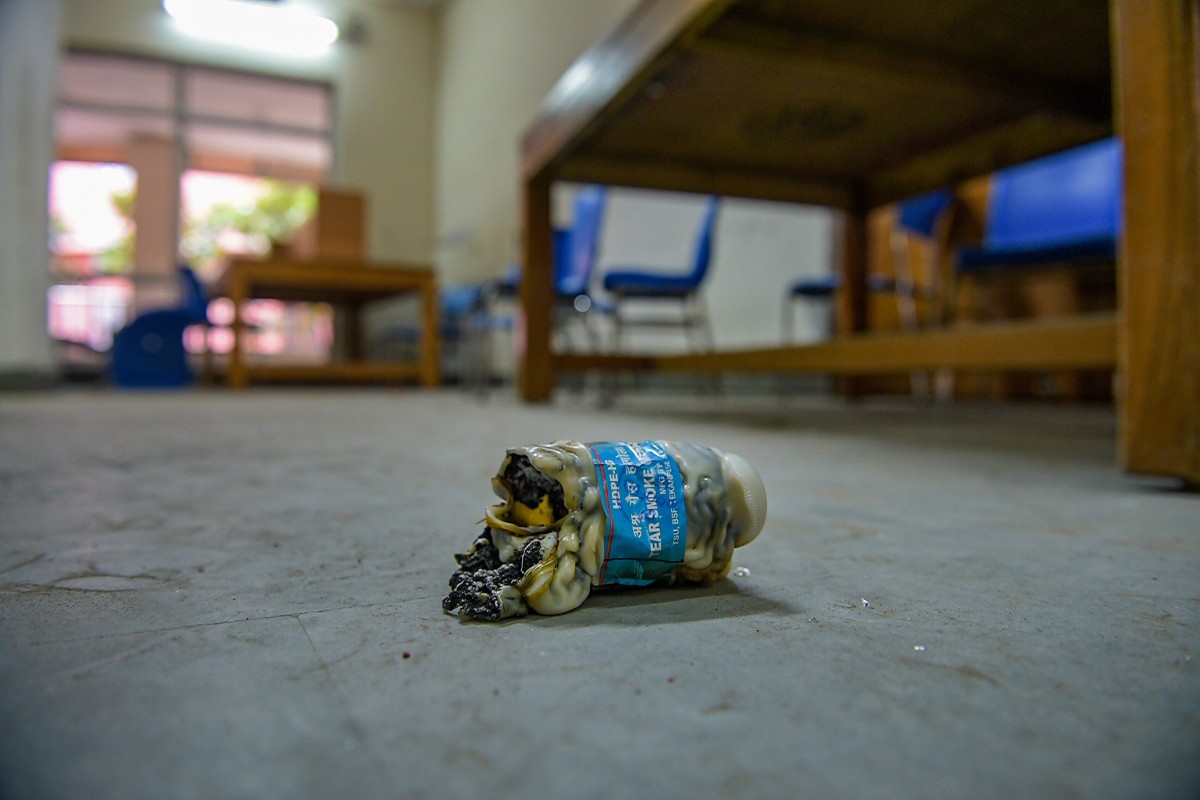 Though the police claim that they could successfully contain violence by temporarily apprehending 52 people, their claim appears to be wholly arbitrary. One of the students detained was picked up by officers from outside a hospital that was treating several injured students. Another student recounted how 40-50 policemen flogged him, as he was dragged from the library where he had been studying, to be detained overnight. At the two police stations where Jamia students were detained, most detainees were injured but were denied access to medical care and water.

On all counts then, the police’s actions on that day went far beyond the force permitted to apprehend or disperse rioters, and instead constitute as a systematic attack. The law in such scenarios is clear – an FIR must be registered. The police, with an additional requirement of sanction, is liable for prosecution under the same criminal laws as anyone else.

In fact, the Supreme Court guidelines on investigation into encounter deaths, issued in the 2014 PUCL v. State of Maharashtra case, are also applicable to cases of grievous injuries in police action. These guidelines mandate that medical assistance should be provided to the injured and their statements should be recorded by a magistrate or medical officer. They also provide for an independent investigation by another agency or police station, and the involvement of the National Human Rights Commission (NHRC) if there are doubts about the impartiality of those investigating.

Instead, the Delhi Police went on record requesting that JMI’s plea seeking registration of an FIR be dismissed, claiming that JMI’s complaint was “generalised in nature.” The Delhi Police SIT (Special Investigation Team) constituted to inquire into the police’s actions has thus far yielded no result.

A report released by the National Human Rights Commission in June recommended administrative action against police officers involved in “damaging CCTV cameras, unnecessarily caning” and using tear gas shells inside the library but no criminal prosecution. Unlike in cases of certain other police excesses, no commission of inquiry has been set up.

Where the investigating agency itself stands accused, ordinary remedies in law have little chance of working. In theory, individuals injured in the JMI violence could approach lower courts for directions that FIRs be filed against officers. But how could this be expected of persons whose very claim is that they have suffered the wrath of the police?

The corrosive effect of this impunity cannot be overstated. In the year following the brutality at JMI, the Delhi Police has been accused of standing by as mobs attacked Jawaharlal Nehru University, of one-sidedness and participation in the worst communal violence Delhi has seen in decades, and of violent excesses while enforcing the public health lockdown. Citizens are left with no effective way to demand accountability for power, even the power to wield lethal violence.

Nitika Khaitan is a lawyer based in Delhi.