The drive, which lasted slightly over three hours, led to the destruction of 20 shops. Despite the Supreme Court ordering a stay, the demolition continued for over an hour. 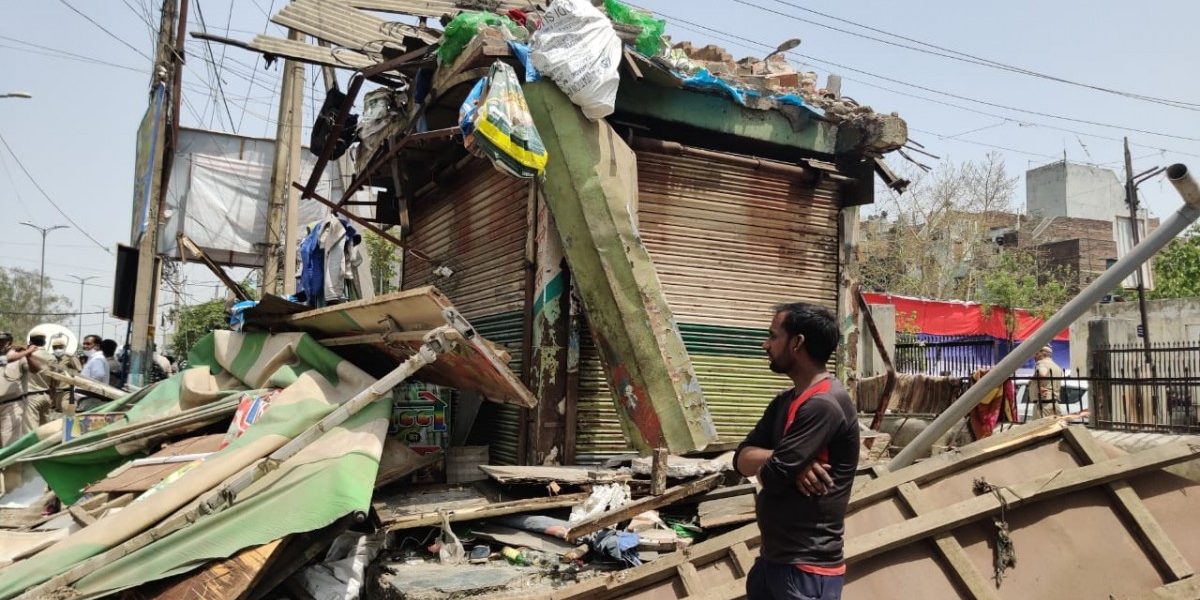 A man looks at a shop that was demolished during an 'anti-encroachment drive' in Delhi's Jahangirpuri on April 20, 2022. Photo: Sumedha Pal/The Wire

New Delhi: Several Muslim residents of Delhi’s Jahangirpuri area on Wednesday called the “anti-encroachment” drive in which 20 shops were bulldozed as a political move to target the minority community, saying their sources of livelihood have been destroyed.

The North Delhi Municipal Corporation (NDMC) issued late-night orders on Tuesday to conduct an “anti-encroachment drive” in the violence-hit Jahangirpuri in North West Delhi on the demands of the BJP’s Delhi president Adesh Gupta.

The drive, which lasted slightly over three hours, led to the destruction of 20 shops, all situated in the same street as a mosque and a temple complex. This was the same mosque where communal violence broke out on Hanuman Jayanti on April 16.

As the drive started proceeding towards the mosque and making its way ahead, one could hear women screaming and begging for the bulldozers to stop. Lanes were barricaded and residents kept behind them, unable to save their sources of livelihood.

On the main road leading up to the Jama Masjid in Jahangirpuri, the owner of one of the first shops is Javed*. He had a small stall selling cigarettes, cold drinks and water. “Everything is lost. Those who actually instigated the violence are scot-free, while people who work hard and earn their daily bread are the ones suffering. Do I look like a rioter? To us, this is all political. We understand what is going on. We are being targeted.”

Altaf*, one of the men who was pushed into a barricaded lane, told The Wire, “Why this (oppression) on us, that too during Ramzan? We are being harassed deliberately. This is wrong on every level!”

Across the accounts of different people that The Wire spoke to, a pattern of helplessness and shock comes forth. Shop owners said they had no idea that an anti-encroachment demolition drive was being conducted.

Arif*, whose brother’s shop was demolished, said, “He just got four new fridges. He was planning to sell them and make some profit. We are now at a loss of over Rs 1 lakh. Who will pay for that? No one thought about how we would eat. How easily they called us rioters and destroyed our shops!”

The region has been rife with tensions since April 16, when a Hanuman Jayanti procession allegedly came under attack. However, the Muslims claimed that the clash began after some Hindutva workers also tried to enter the mosque. 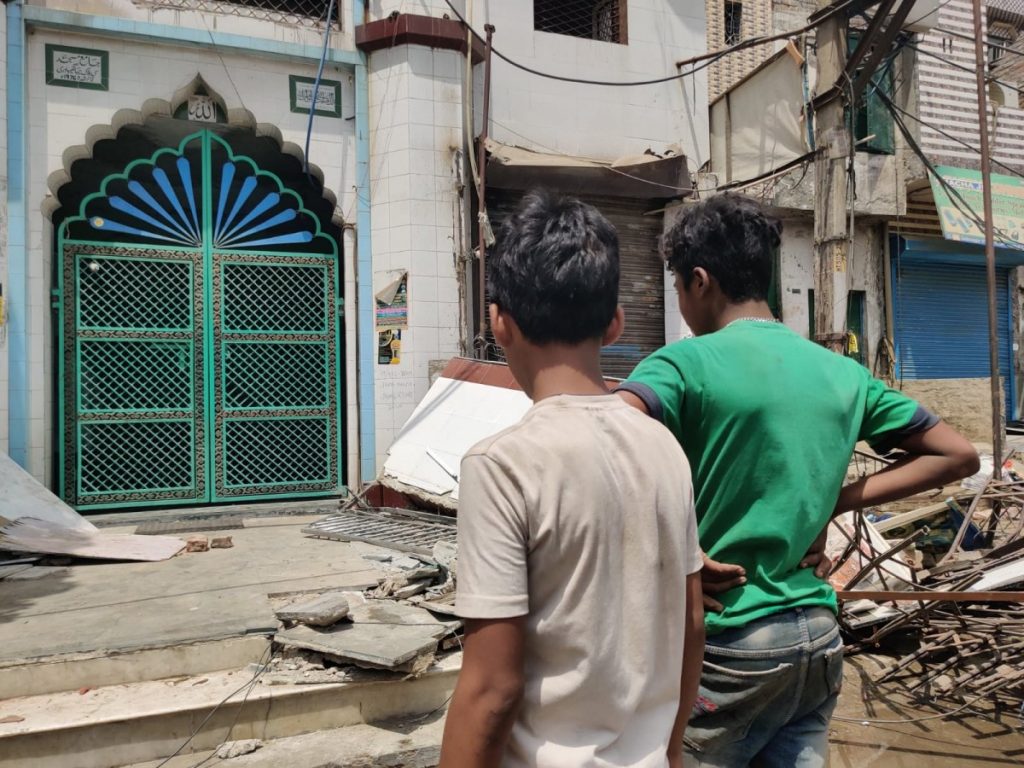 The mosque in Jahangirpuri which was the site of a communal clash on April 16, 2022. Photo: Sumedha Pal/The Wire

Kashif* said, “Why are we single-handedly being targeted if they are cracking down on encroachments? Why are they not cracking down on Hindus and singling us out? The demolition started next to the masjid and stopped where the temple is. This is all pre-planned.”

Sushil, a Hindu, was also kept in a barricaded lane. He said, “We have always lived together in peace and harmony. Now, the atmosphere in the area is getting polarised. This is a strategy only for political gains.”

As bulldozers reached the area in the morning, lawyer Dushyant Dave urgently mentioned the matter before the Supreme Court. The top court issued a stay order, but the drive continued for over an hour. Municipal authorities claimed they did not receive the order immediately. 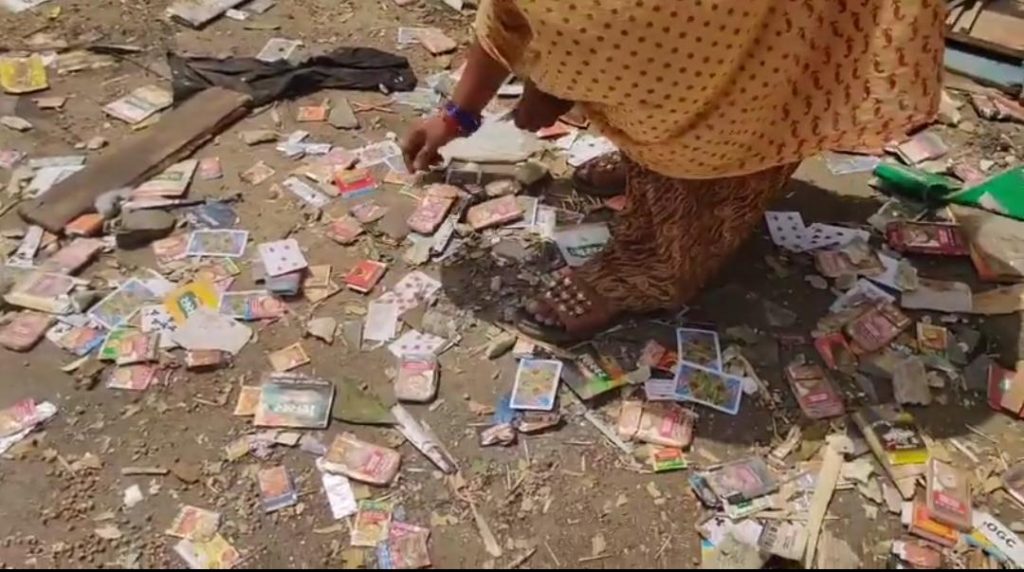 A woman tries to salvage items from a shop that was destroyed in an ‘anti-encroachment’ drive in Delhi’s Jahangirpuri on April 20, 2022. Photo: Sumedha Pal/The Wire

The pattern of processions during Hindu festivals leading to communal clashes, followed by bulldozing of properties belonging to Muslims has been repeated across several north Indian states. In Madhya Pradesh’s Khargone, the government moved to demolish several properties that belonged to Muslims, accusing them of pelting stones at a Ram Navami procession on April 10. In Gujarat too, ‘bulldozer justice’ was handed out. Similar threats were made to the Muslim community in Uttarakhand’s Roorkee.

Speaking to The Wire, advocate M.R. Shamshad said, “A politician or the state cannot decide which structure is illegal. The fact that the demolition drive destroyed the only source of livelihood of many families is a matter of concern. There is no sense of justice.”