For the last many decades, the Israeli authorities have been systematically demolishing their homes and confiscating their agricultural implements. Now, the May 4 ruling may mark an end of hope for these people. 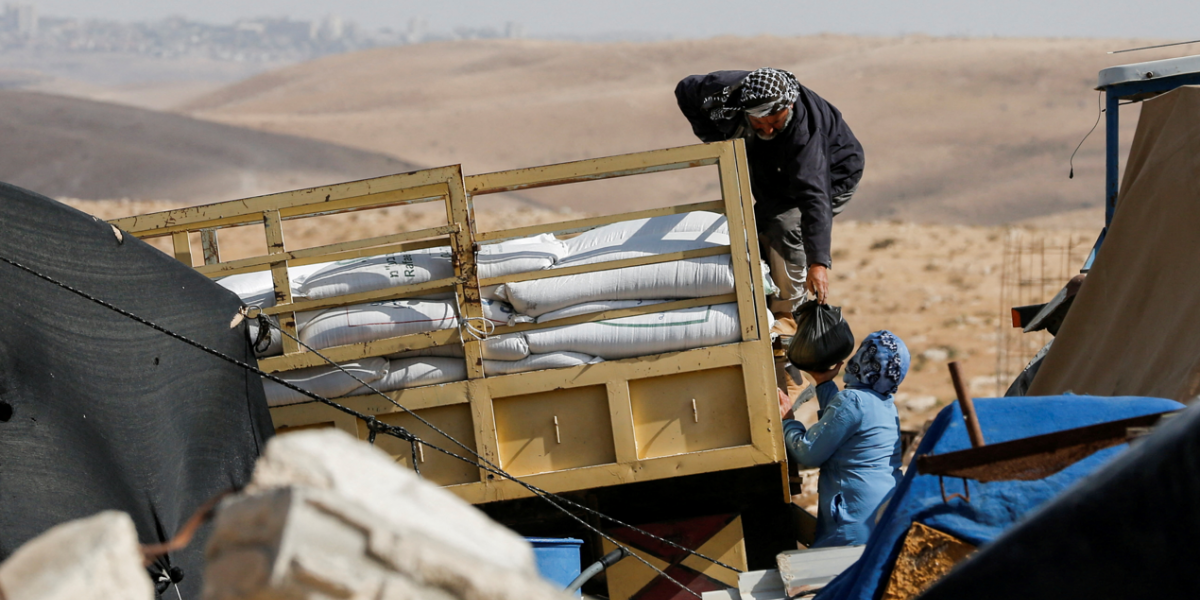 A Palestinian shepherd unloads fodder for his livestock in a field, after Israel's Supreme Court rejected a petition against the eviction of more than 1,000 Palestinian inhabitants of a rural part, in Masafer Yatta, South Hebron, in the Israeli-occupied West Bank, May 5, 2022. Photo: Reuters/Mussa Qawasma

On May 4, 2022, the eve of Israel’s Independence Day, the Israeli Supreme Court, in session as the High Court of Justice, issued a ruling allowing the State to destroy eight Palestinian villages in the area of Masafer Yatta in the South Hebron hills, and to expel their inhabitants permanently.

This ruling is a travesty of justice, an act of extreme judicial cruelty, and a severe blow to basic, universal human values and human rights. It also contravenes international law, including the laws of belligerent occupation as enshrined in the Geneva Convention of 1949 and the Rome Statute of 1998 defining crimes against humanity and war crimes. Israel is a signatory to both these treaties.

Some 1,500 Palestinians (and possibly many more) in Masafer Yatta are now in imminent danger of dispossession. The ruling also has severe implications for the survival of another five villages situated in military training zone 918. Here are the names of all 13 villages under this zone: Jinbah, Markaz, Fakhit, Sfayi, Halawah, Khalat al-Dab’a, Taban, Majaz, Rakiz, Simri, Magha’ir al-‘Abid, Tuba, Mufagara-Sarura. To eradicate families from these villages is to efface an entire traditional culture and a unique, historic way of life.

The training zone was arbitrarily established by the army in 1981, and the present high court ruling reconfirms its legality. For over 20 years the Palestinian residents of this area have been struggling against eviction. The ruling of May 4 may mark the end of this legal process and thus the end of hope for these people. For the last many decades, the Israeli authorities have been systematically demolishing their homes, destroying the roads and wells, and confiscating their meagre agricultural implements.

During this same period, Israeli settlers were building and expanding illegal outposts within the same training zone, usually with the open support of the army; such settlements enjoy immunity from any threat of destruction, while the settlers engage in daily harassment and violence against their Palestinian neighbours.

Also read: Israel’s Colonisation of Palestine and the Pursuit of International Justice

We know them well, from years of human rights activism in the South Hebron hills. Many of them are close friends. These are peace-loving people who wish only to live on their own lands, to graze their flocks, to plant and harvest wheat and barley, to celebrate their festivals, weddings, the birth of children and grandchildren, to educate these children – all this in the face of continuous encroachment on their lands by Israeli settlers and constant harassment by the army and police.

In simple words, they have been living for the last several decades in a regime of ever more intense state terror. Not only their homes and way of life but their very lives are threatened by daily violent attacks by Israeli settlers, usually backed up by the army. A Palestinian woman fills water in her shed, after Israel’s Supreme Court rejected a petition against the eviction of more than 1,000 Palestinian inhabitants of a rural part, in Masafer Yatta, south of Hebron, in the Israeli-occupied West Bank, May 5, 2022. Photo: Reuters/Mussa Qawasma

The judges, dismissing hard evidence submitted by the Palestinian plaintiffs, ruled that there were no permanent residences in these villages before 1981, when the firing zone was declared. There is ample evidence going back at least to the first half of the 19th century that the Palestinians lived in the villages of Masafer Yatta for at least eight to ten months each year (some families throughout the entire year).

In the hot summer months, they would sometimes move with their herds to the cooler highlands, returning before the autumn rains. Most of the families lived in caves – a unique population in the Middle East – which explains the absence of stone houses or other homes in the aerial photographs of the area from the mid-20h century. Many of the caves have been destroyed, over the years, by the government; today, the families mainly live in simple standalone buildings.

It is clear that the judges failed to take seriously the documented proof that these villages were long-standing sites of continuous residence, which is also confirmed beyond doubt by reliable oral histories from older members of the communities of Masafer Yatta.

All this may seem to outsiders to be a relatively minor, local problem. It is not. What is at stake is not only the survival of the Palestinians of Masafer Yatta. Humanity stands today at a historic point of crisis, in which the relatively few humane restrictions on brute military force – that is, the international laws of war anchored in the Geneva Convention and its more recent supplements – are in acute danger of being cast aside and forgotten, as seen at the present moment in Ukraine, among other places.

The forcible expulsion of the Palestinian communities of Masafer Yatta will have implications for the whole of humanity. Israel’s Supreme Court has now brazenly claimed, in its ruling, that international laws of war and, specifically, the laws of belligerent occupation, are not binding on the State of Israel and can be overruled by legislation and the orders of senior military officers. This ruling is shameful and cannot be defended.

Reputed experts on international law say that the court’s ruling on Masafer Yatta may well expose the State of Israel, and all those connected to implementing this decision, to investigation and possible prosecution in the International Criminal Court in the Hague.

But there is worse to come. The court’s ruling is another milestone in the process of remorseless annexation – that is, outright robbery – of Palestinian lands and the expulsion of the rightful owners of those lands. As Haaretz, Israel’s premier newspaper, has said in its editorial of May 8, the court’s decision effectively confirms the charge that Israel’s rule in the occupied territories is a version of apartheid, based on domination by one privileged ethnic group over another population that is deprived of all elementary human rights.

We are facing an ethnocratic hyper-nationalism that seeks to achieve its messianic goals (or profitable expansion) at the cost of Palestinian lives, language, culture, and history.

We are doing whatever we can to stop this inhuman crime, but the support of the international community is crucial to our struggle. You can help. You can make a real difference. Please make your voices heard, call your representatives and elected officials, spread the word, urgently – for the sake of the innocent people of Masafer Yatta.