Iran: Five Killed in Protests Over Death of Woman in Police Custody

Masha Amini was arrested by Iran's morality police last Tuesday after they found her in violation of the country's dress code, which requires women to wear head coverings. 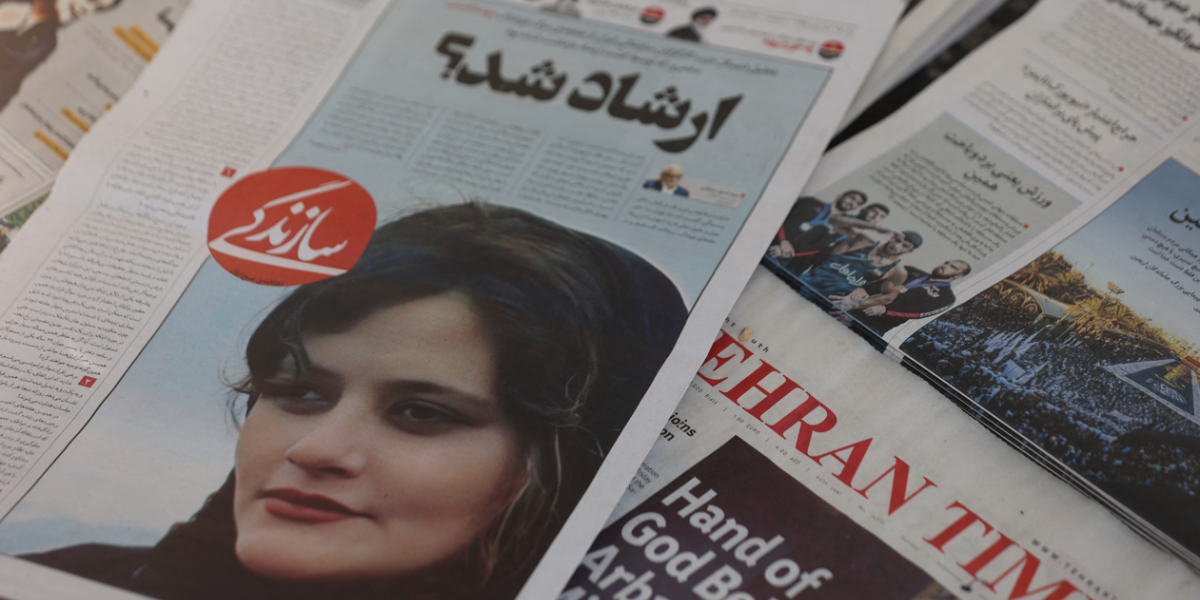 FILE PHOTO: A newspaper with a cover picture of Mahsa Amini, a woman who died after being arrested by the Islamic republic's "morality police" is seen in Tehran, Iran September 18, 2022. Majid Asgaripour/WANA (West Asia News Agency) via REUTERS

Iranians in the capital, Tehran, as well as at universities around the country took to the streets for a third straight day to protest the death of 22-year-old Masha Amini at the hands of Iranian authorities.

Five people were said to have been killed during the demonstrations in Iran’s Kurdish region on Monday after security forces opened fire on the protesters.

There were reports of internet outages across Tehran and Kurdish areas of the country, as well as of riot police dispersing crowds in the capital.

The London-based watchdog group NetBlocks confirmed, “near-total disruption to internet connectivity in Sanandaj, the capital of the Kurdistan Province in west Iran,” according to a tweet released Monday evening.

⚠️ Confirmed: Real-time network data show a near-total disruption to internet connectivity in #Sanandaj, the capital of Kurdistan Province in west #Iran; the incident comes amid widening protests over the death of #MahsaAmini after her arrest by morality police 📉 pic.twitter.com/wZVHJjgpiR

The international rights group Hengaw on Monday claimed two individuals had been killed in protests in the Kurdish city of Divandarreh. Iranian officials rejected, “some claims of deaths on social media,” saying only that arrests had been made.

During protests in the Kurdish city of #Divandarreh, two civilians named Fuad Ghadimi and Mohsin Mohamadi were killed by direct fire from armed forces of the Islamic Republic of Iran. 15 other people were injured.#JinaMahsaAmini #MahsaAmini

Masha Amini was arrested by Iran’s morality police last Tuesday after they found her in violation of the country’s dress code, which requires women to wear head coverings.

While in custody, Amini collapsed and was rushed to hospital where she was declared dead. Police deny Amini was mistreated, claiming she died of a heart attack. But her family says she had no record of illness and was in perfectly good health when she was arrested.

Protests erupted Saturday when Amini, who is Kurdish, was buried in her western Iran home of Saqez. Protesters smashed windows and set dumpsters ablaze before police made several arrests and fired teargas to disperse crowds.

Iranian President Ebrahim Raisi spoke with Amini’s family and promised a full investigation. Judicial and parliamentary investigations have been ordered, as well.

On Monday, more protests were staged at universities around Iran. Demonstrators called for transparency on Amini’s death as well as the dismantling of the morality police. The unit, which enforces clothing and other infractions, has been criticised for its treatment of those it arrests, especially young women.

In Washington, DC, the White House called for accountability, labeling Amini’s death an “appalling and egregious affront to human rights” and demanding that Iran “end its use of violence against women for exercising their fundamental freedoms.”

France’s Ministry of Foreign Affairs also condemned the arrest and violence that led to the death of Amini. The ministry said that the death of the Iranian woman at the hands of Iran’s morality police is “profoundly shocking”, calling for a transparent investigation to examine the circumstances of her death.

Women have been legally obliged to wear hijabs in Iran since the Islamic Republic was founded in 1979.