Interview | 'I Am More Patriotic Than Those Supporting CAA': Jadavpur Student Protestor

Speaking to The Wire, 24-year-old Debsmita Chowdhury said that the CAA was "both anti-human and also legally unconstitutional".

Kolkata: Apart from being an institute of academic excellence, Jadavpur University (JU) is also known for its students protesting for various socio-economic and political causes. However, most students and faculty members of the university were taken aback, when 24-year-old Debsmita Chowdhury from the Department of International Relations walked up to the stage on the day of the convocation and tore apart a copy of the contentious Citizenship (Amendment) Act (CAA).

Chowdhury is a first-generation student hailing from a middle-class family in Kolkata, whose favourite place in the university campus is the library. According to her friends, over the past five years, she has spent umpteen hours in the library preparing notes.

JU professor of International Relations Subhajit Naskar told The Wire that Chowdhury is a bright and extremely rational student. However, Naskar said, “We were caught by surprise that she took such a gutsy step in a situation where we professors cannot.”

On Saturday morning, The Wire was in conversation with Debsmita regarding her stance on the CAA, and what triggered her protest on the day of the convocation.

The following are edited excerpts from the interview.

Have you read the CAA? What is your stance on it?

I think the entire Act is a violation of not only the Constitution of India, but also international standards. We, as students of politics and international relations, study both national and international law and the conduct of all nations. People might call me ‘anti-national’, but I personally feel I am more patriotic than those who are supporting the CAA. And that is because I know what grave consequences this Act has for India as a possible world power. And the way it will downgrade India’s image as a democracy and as a secular nation, especially in South Asia.

In a recent television interview, you said you were “compelled” to protest. What was the compulsion?

India’s first prime minister Jawaharlal Nehru wanted India to be a secular nation. After the partition of 1947, the majority of Hindus stayed in India and there was much pressure on Nehru and other founding fathers to make India a Hindu nation. Even then, Nehru and other leaders did not succumb. And I applaud Nehru for that. Even Mahatma Gandhi opposed it. Because of this, the entire world sees India in a different light.

But today, CAA violates the founding principles of our Constitution. And for students like me, it (CAA) undermines the discourse that we study. So it has compelled students like me, who mostly prefer to be in academics and had no plans to come into politics, to take a stand. The convocation day was very special to me, as it is for every student. The government must think why its actions are compelling students to tear the CAA or refuse the degree or boycott the convocation. 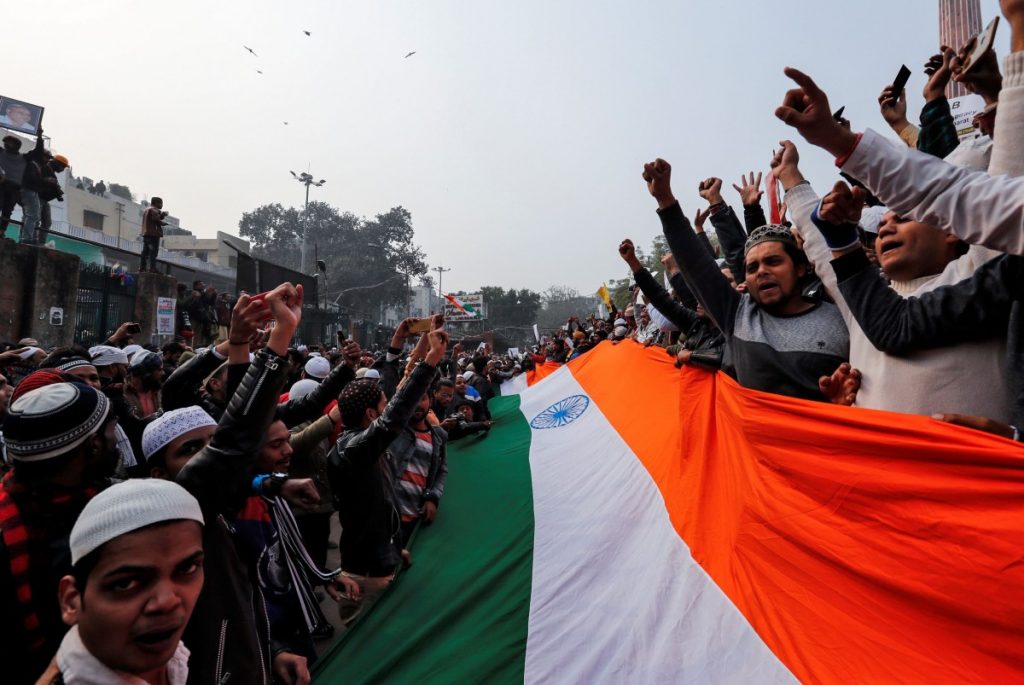 Demonstrators hold the national flag of India as they attend a protest against a new citizenship law, after Friday prayers at Jama Masjid in the old quarters of Delhi, India, December 20, 2019. Photo: Reuters/Danish Siddiqui

You said you are not associated with any political party or students union even though you were studying in a politically-charged university. What gave you the courage to mark your protest?

I am a very shy person and mind my own business. My friends and professors were all surprised and shocked to see me outraged in that manner. I have never participated in any public demonstration or spoken at any public forum. I have been very active in debate competitions, but the topics are mostly confined to academics. But I have never done anything on the political front.

It’s not about courage; it’s the subject that I have studied. The subject gives a completely different and deeper understanding of politics and its implementation, which is different from a normal citizen. We get a political consciousness on not just the national but an international level as well.

So, the political consciousness which you developed while studying International Relations helped you take this stance?

Yes, to some extent. Every individual has their own reason to protest, and all of them are important in their own way. Now, people are giving me attention because I received a gold medal. Even lawyers are taking a stand against CAA. Why are lawyers protesting? Why were lawyers helping the students who were detained or arrested during the CAA protests for free of cost? Because they know that things are getting out of hand.

Even bureaucrats are discussing among themselves if they can withdraw from the government’s current action, as they know the grave impact it has. I think every person is politically conscious, that’s why people are taking a stand now. Today, many people are protesting against the CAA are doing it because they perceive it as anti-human. The educated masses are protesting because it is both anti-human and also unconstitutional.

What was the trigger? Was it the Act itself or the violence against the students who were protesting?

It’s not just one standalone thing that triggered me, there are various things that built up to this scenario. Like the death of Rohith Vemula in 2016, I believe his death was state-sponsored murder, because the government delayed his scholarship, which is a lifeline for many students.

Another incident is the disappearance of Najeeb Ahmed from JNU. Where is Najeeb? How can a person disappear all of a sudden? The authorities have been unable to trace him and the JNU Students’ Union — I don’t know their stand, maybe they too have given up hope. I feel sorry for Najeeb’s mother, who is still searching for her son.

Then, the National Education Policy, the gross privatisation of colleges and universities, various provisions by which the government has reduced funds for higher education. When you promote privatisation, education becomes unaffardoable for poor students, first-generation learners and marginalised people.

It is the culmination of all these events. CAA is an Act which has further pushed the students, the youth to the edge.

Did you tell anyone that you were planning to protest on the convocation day?

No, I didn’t, because it was a spontaneous act. I didn’t want any drama about it. The video that went viral was shot on a mobile phone. My act was not scripted. I thought this is the least I could do, as I was one of the privileged ones who was being felicitated as a gold medallist. I stood by the principles and ideals that I studied and believed.

What was the reaction from your family? Also, did the authorities or professors say anything to you?

There was immense support from my family and friends but also some fear. They worry that, as a female student, I protested against the government and there could be a backlash in the future. Even my professors supported me. I am getting the support that a student requires from the faculty.

There were also sarcastic comments, trolls and hate. However, I didn’t pay much heed to that. I didn’t do it for applause; I did it for myself, for the things I believe in, my ideology. I don’t impose it on others. At the same time, being a rational individual and a political science student, I know how to keep my human instincts away from my professional course.

What’s your plan going ahead?