There is no nudity, nor any sexual activity, in the video – it portrays a man doing aarti to an idol of the UP chief minister, both fully clothed.

The posts in question – and three others – have two things in common. They were all posted to Instagram by a group calling themselves ‘Superhumans’ Archive of Cringetopia’, who run a page called @cringearchivist. And they were all removed by Instagram, citing violations of the company’s guidelines.

Many of the page’s posts make academic references and are written in ways that would not be easy for all audiences to understand. This, the administrators say, has been a conscious decision – because many of their posts are critical of the Hindu Right and the current regime.

The most recent of these removals took place when Instagram flagged a video posted by @cringearchivist of Prabhakar Maurya, a resident of Ayodhya, worshipping an idol of Uttar Pradesh chief minister Yogi Adityanath at a temple built specifically for this purpose. This video, according to the notification @cringearchivist received when it was taken down, violated Instagram’s ‘sexual activity and nudity’ restrictions. There is no nudity, nor any sexual activity, in this video – it portrays Maurya doing aarti to an idol of the chief minister, both fully clothed. 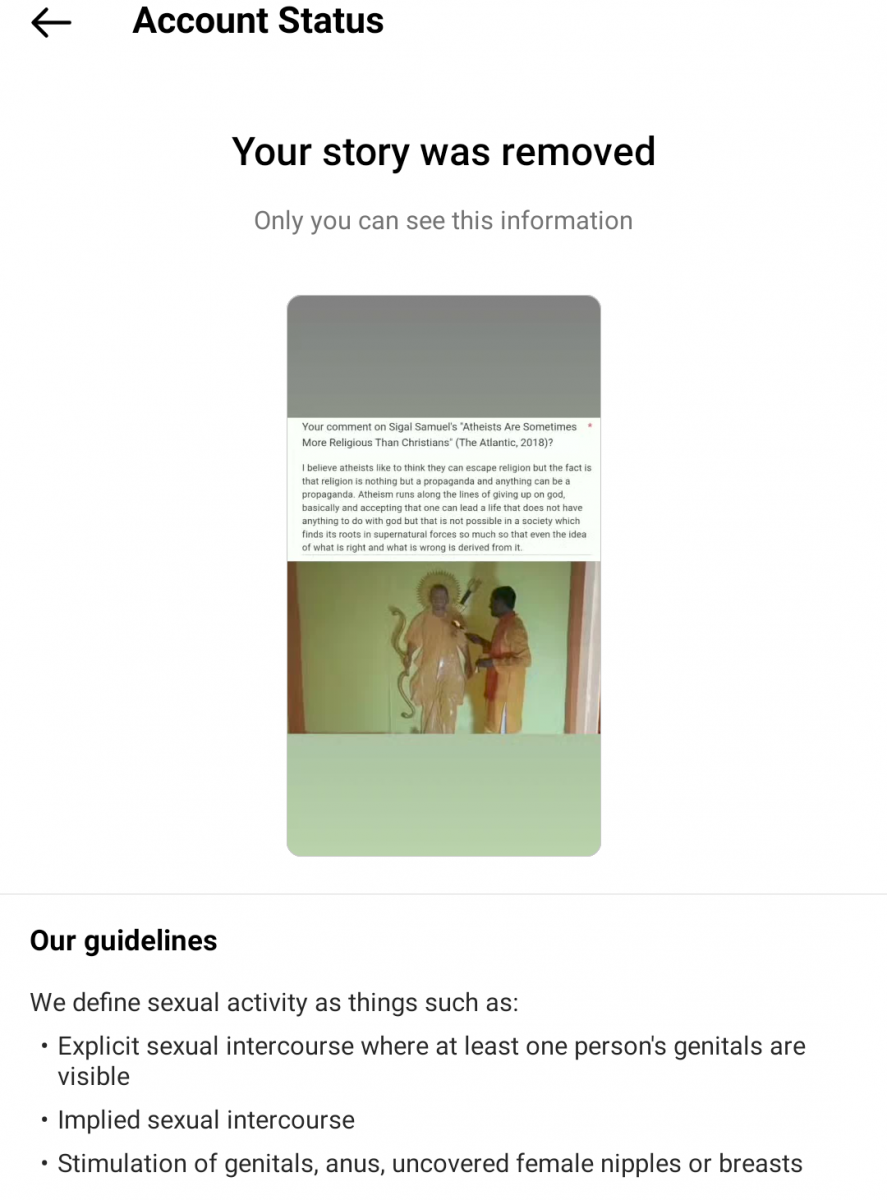 The takedown notification for the post on Prabhakar Maurya.

In an e-mail to The Wire, the administrators behind this satirical account – referring to themselves as a group of academics and journalists choosing to remain anonymous – questioned the speed with which these posts were taken down. All the action, they said, happened within a few minutes of a post going up – raising questions on whether there was any actual oversight involved, or if an algorithm was taking spot decisions based on criteria that may not always be valid.

The Wire reached out Meta with questions about the Maurya post takedown in particular and the methods used for such decisions in general. While Meta has not responded, The Wire did receive an email from an employee of the PR agency Weber Shandwick, asking for the post in question to be re-attached. No further communication has been received after this from either Meta or the PR company; this article will be updated if they respond.

In the past, @cringearchivist has posted several memes comparing the Hindu Right in India with Nazi Germany. Since one of the recent posts removed is also of that kind, the administrators are worried that older posts may too be flagged, perhaps leading to the entire account being taken down.

Instagram’s community guidelines focus on creating a “safe and open environment”. The guidelines, however, do not lay down whether or how content will be managed differently when produced satirically, or perhaps in support of those who have faced sexually abusive messages and wish to make their complaints public. The publicly available information on the company’s website also does not detail the process followed before a post is taken down.

One of the other posts removed from @cringearchivist’s page, in April this year, was a screenshot of a story shared by Instagram influencer Harjas Sethi, who has a verified account on the platform. She was satirising an oversexualised direct message she had received, about the sale of sexual services. @cringearchivist’s attempt to support Sethi and amplify her voice did not go down well with the platform, however, which chose to take down the post.

The administrators of @cringearchivist wrote to Guy Rosen, the vice-president of Integrity at Meta, about two specific posts being taken down with fair reason. “We have been engaging in public philosophy, satirising all authoritative icons, from Modi to Putin to Uncle Sam. However, your dysfuctional AI — and Community Guidelines reviewers — have flagged two of our posts for “dangerous and violent groups” and “nudity and sexual activity”. We would like to draw attention to the comicality of these steps which have now pushed our movement, which itself is in a nascent stage, to the edge of complete takedown. That’s why we felt compelled to escalate this matter before any absurdity in that direction materialises,” the e-mail reads.

“We have also spent money on ads, but what have we got in return? Our organic growth has been killed, we have been stopped from using branded content tools because of this wrongful censorship? For satirising Nazis? Does your company consider Hitler as a sacred figure? This AI-linked blanket ban is a joke; critics of Nazis also use symbols of Nazism, which technically imbecile minds will never understand. Will your technology now censor Holocaust Museum and the Simon Wiesenthal Center? (In reality, your AI and reviewers are performing very poorly, you must accept it. For they never removed fanatical posts we submitted for reviews. They didn’t remove a recent Islamophobic post by India’s ruling party which Twitter removed, for instance),” it continues.

Rosen has not replied to this email, and the two post takedowns that @cringearchivist flagged to him have not been revoked.

India is among the largest markets for Instagram (as well as Meta’s other social media products, Facebook and WhatsApp). Despite that, Meta’s Oversight Board recently flagged the lack of sufficient non-English-language moderation on these platforms in India. In the past too, Meta platforms have been accused of shielding leaders and associates of the Bharatiya Janata Party even when they post inflammatory and incendiary content, but being much quicker to act against those who are critical of ruling party.