Based on Ali's complaint, the police arrested three men. However, on the same day, a case was filed against Ali for allegedly molesting the 13-year-old daughter of one of the accused. 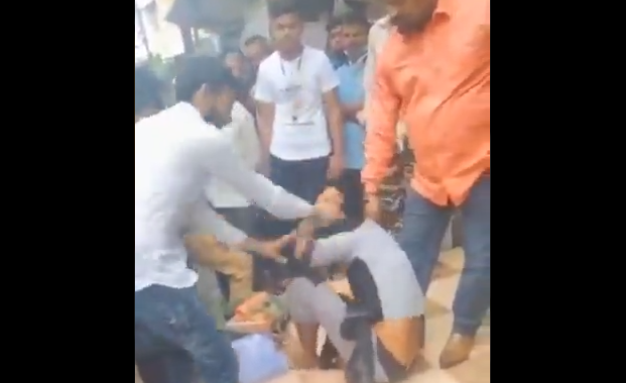 A video grab of the incident in which a bangle seller was assaulted in Indore. Photo: Twitter

Indore/Bhopal: The Muslim bangle seller brutally beaten up and robbed in Indore, Madhya Pradesh, for selling his wares in a “Hindu area” has been booked under the POCSO Act for allegedly touching a 13-year-old girl inappropriately, NDTV reported, citing officials.

Based on the bangle seller Tasleem Ali’s complaint on Sunday night, the police arrested three men the next day for assaulting him. The incident took place on Sunday.

However, later on Monday evening, a case was filed against Ali under Protection of Children from Sexual Offences or POCSO on the complaint by the minor daughter of one of the accused.

According to the complaint, reported by the Indian Express, Ali came to the girl’s house on Sunday at 2pm to sell bangles, and identified himself as Golu, showing a “half-burnt” Aadhaar card. “We began purchasing bangles from him. As my mother went to fetch money, the bangle-seller looked at me in an indecent way and grabbed my hand, saying ‘I’ll help you wear bangles.’ He also inappropriately touched my cheeks,” the girl alleged in her complaint. She claimed she screamed, and Ali threatened to kill her and ran away, which is when locals apparently chased him, the newspaper reported.

The police told NDTV that the complaint was filed later as the girl said she was embarrassed.

However, none of the men seen assaulting Ali on video make any reference to his having misbehaved with any woman or girl; instead, they were upset with him for coming to a “Hindu area” and for not making it clear that he was a Muslim (he apparently used his nickname ‘Bhura’, which is religion neutral). Some of the men also seemed bent on assaulting him because of “what happened earlier in Bombay Bazaar”, a reference to an incident from a few days ago in which Muslim men had allegedly molested two Hindu women.

The police has filed a case against Ali under POCSO and IPC sections 420 (cheating) and 471 (using fake documents as real ones), among others. He was detained at Banganga police station for questioning.

Speaking on the assault on the bangle seller by a mob, Madhya Pradesh home minister Narottam Mishra said in Bhopal, “The controversy started when this man described himself as a Hindu to sell bangles to women during the holy month of saavan, while he actually belongs to another community.”

Also read: A New India Where Replacing ‘Aligarh’ with ‘Harigarh’ Is More Gratifying than Social Change

According to the police, the bangle seller was carrying two Aadhaar cards with separate identities – one of the cards had the name of Asleem, son of Morsingh, and the second one carried his identity as Tasleem, son of Mohar Ali.

In the video of the attack, a man is clearly seen warning the bangle seller to not ever come around in a Hindu locality. Then a group of men empty his bag of bangles, abuse him and start thrashing him.

The bangle seller had filed a complaint in the Central Kotwali police station late Sunday night (the day the incident took place) alleging five to six persons, who were part of a mob, started beating him up after asking his name in the Govind Nagar area of Indore, the officials said.

Ali also alleged in his complaint that members of the mob used objectionable words against him and snatched Rs 10,000 in cash, mobile phone, Aadhaar card and other documents besides bangles worth over Rs 25,000 from him.