No Country for My Nationalism

If you look back at your school life, college life, street life, and community life, perhaps you’d find a story similar to mine from a time when nationalism flowed quietly and steadfastly. 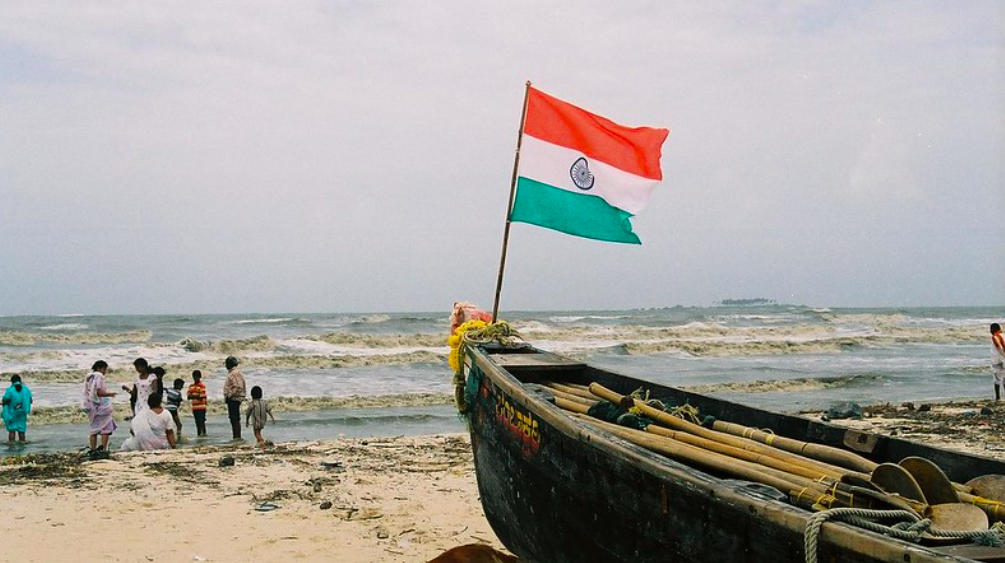 'My patriotic loyalty is by no means unique – many patriots may share similar feelings – but what makes it interesting is how it all started.' Photo: Flickr/Ankur Gupta (CC BY-NC 2.0)

I have always been somewhat of a nationalist. I say “somewhat” only because of the modern-day attributes it carries, and because liberals like me may no longer qualify as nationalists in modern-day India. Even when I began to understand the argument that nation-states are born out of the trauma of dividing and demarcating, that boundaries separate and exclude not just territory but people, and that the birth of nation-states is steeped in the blood and sacrifice of many, I would still secretly nurture a patriotic loyalty towards my country in a naïve, unshakeable sort of way.

My patriotic loyalty is by no means unique – many patriots may share similar feelings – but what makes it interesting is how it all started.

I studied in a Jesuit “missionary” school in a steel city called Bokaro (then in Bihar, now Jharkhand). One of my most endearing “school memories” is of the morning trips to school on Republic and Independence Days. Going to school on “holidays”, for some reason, was a particularly pleasurable exercise notwithstanding the fact that it was mandatory for us to be present on these two days. This was the one “mandatory” we didn’t resist. Unfailingly, year after year, we’d be there to hoist the tricolour and pay our respects to the country and to our founding fathers who gave us a free nation.

Being a holiday, we were often driven to school in our school-bus by our Vice Principal, Father Keogh (a Jesuit, Australian by birth but Indian by home), as the regular bus-staff would be enjoying their “off-day”. We’d reach school, line up and stand in rows, look up reverentially at the flag being hoisted and sing the national anthem. And sometimes, depending on the status of my teenage hormones, I would even feel a lump in my throat as I did so.

The anthem sung, we’d break up into groups of animated chatter; some of us would pick up the flower petals that the unfurled flag had showered (to be pressed later in books), greedily eat the laddoos that were distributed and feel the joyousness of just being part of that moment. And then the event would be over and we’d be on our way home, once again being driven by Father Keogh.

The Principal of our school was another Australian Jesuit by the name of Father Moore. If Father Keogh was the epitome of efficiency, charm and energy, Father Moore, the elder of the two, was a gentle, loving, generous soul. He’d preside over the morning assembly each day that would eclectically begin sometimes with an inspirational poem in Hindi (for instance, “kranti ki mashaal ko/desh ke jawan tu jalayeja”), or with a spiritual, meditative prayer, sometimes with Saraswati Vandana, or with Vande Mataram, sometimes with prayer to the Lord, and oftentimes with Rabindranath Tagore’s Where the Mind is Without Fear. 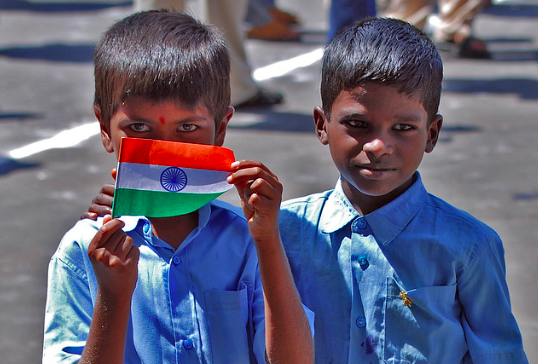 ‘We’d reach school, line up and stand in rows, look up reverentially at the flag being hoisted and sing the national anthem.’ Photo: Prabhu B Doss/Flickr (CC BY-NC-ND 2.0)

One Wednesday each month, we’d have an hour-long “special assembly” in the “Chapel Hall” which Father Moore would conduct. The assembly – mostly about school achievements, announcements, accolades and applause – would end with the Indian national anthem. One of the things that would irk Father Moore was the way we’d sing the anthem. Once he told us that we were singing the anthem at a pace that was all wrong – “it’s too much of a tuneless drawl”, he said; “it should take 52 seconds, no less, no more.” He’d stand there in the hall, time us, look at us with an indulgent, cross look if we got it wrong, or reward us with a pleased smile if we got it right.

Here was a Jesuit school that made no attempt to proselytise us, to even “inculcate” subtly. Here were Fathers and Sisters who were Christians, some even foreigners (doubly of the “alien”, “non-native” nationalist category) who joined us in celebrating our country’s freedom and culture and who even acquainted us with the subtleties of our own nationalist ethos. Here was a culture of toleration, secularism, nationalism that existed in undeclared, unstated, quiet harmony.

You could argue that this was an oasis, an isolated pocket in a small obscure steel city, but if you look back at your school life, college life, street life, community life, perhaps you’d find your own similar story and your own resonating instances. These are vignettes from an era gone by, when living together, being together, belonging to a nation was a quiet pride, not a hostile declaration mediated by the religion.

The next decade, beginning 1990, saw the tumult of the “Mandal clashes” whose brunt I personally faced one night. I was five months pregnant, travelling alone in an overnight train from Bokaro to Calcutta, when the train was gheraoed and attacked by pro-Mandal or pro-reservation supporters (it was hard to tell amidst the trauma and bloodshed that followed).

Men with crude country-made pistols, spears, bludgeons, shattered the window-glass, stormed in and wreaked havoc in the compartments. My unborn and I survived the trauma, thanks to a gold chain and ring that I offered as a peace offering. Within a year or so I was back in Delhi University, queuing up for jobs, losing some to “reserved seats”, a feature that continued in the coming years, but failing to ever make me resentful of “reservations”. I knew that I was not the victim here.

But somewhere along the way everything changed. We, the Hindu majority began to be made aware that we were victims in our own country. The idea that this nation, its “first citizens”, their faith, their pride, their temples, their beliefs were under threat, was told and retold till it became part of our collective consciousness. Slowly but surely, from the podiums of politics and the portals of power, from the rathyatras and election rallies, hate politics steeped into our homes and conversations. Perception of threat and collective victimhood seeks a vengeful rewriting of history. If we were glorious once and if that glory has been forcefully taken away from us, then we have to rise in unison, as one people, avenge our losses and take back what is rightfully ours.

Collective vengeance is an implacable monster. A collective retribution that began with the spectacle of Babri Masjid demolition is not likely to end with the Gyanvapi mosque. The saga of revenge and retribution is on auto-pilot now. It doesn’t need a pilot at all times. The predatory zeal of self-proclaimed keepers of Hinduism runs of hate and polluted air. They target and bait minorities, their food, their homes, their loves, their places of worship, often leaving death and destruction on way to their fantasy nation.

Also read: The Evidence Is In: Freedom of Expression Is Dead in India

The idea of “internal enemies” has become so rampant that every forum, every theatre – streets, homes, offices, universities, media – has volunteers pressed into nationalist service. Bear with me as I cite and small example. I have deliberately chosen a mild, and a rather silly one from Facebook (and not the more vituperative ones from Twitter) so that it qualifies as the rule rather than as an exception.

It was sometime in June 2020, during the COVID-19 lockdown period when I was trawling the Facebook “News Feed”, that I came across a “public post” (by a person initialled A.M.), shared by a Facebook friend of mine. This friend is a doctor and also someone I have known since I was a child as a genial, charming, elder-brotherly guy. A.M.’s profile picture was that of V.D. Savarkar, leaving viewers in no doubt about his political preferences and predilections. It told us quite unambiguously that here was a person loyal to the Savarkar’s ideology of Hindutva that determines who is a valid and “natural” citizen of India and who is not.

Savarkar may have written Essentials of Hindutva a century ago but the context of this post was contemporary – Chinese incursions in Galwan Valley. The incursions, however, were only a pretext to define “the five key traits of desh ke gaddar (traitors of the nation).” Before the traits were listed, A.M. stated quite candidly and with impunity typical of pre-approved, pre-sanctioned conduct: “First of all I have to finish them.”

Who were these traitors A.M. wanted to finish? What was their seditious crime? By gaddars he likely meant those reporters and citizens highlighting stories of Chinese incursions and thereby “undermining” exploits of the Indian army and claims of the Indian government. My doctor-friend may have only “shared” the post but in his sharing lay his endorsement – an endorsement not just of a Facebook post but of a conception of nationhood that certifies who a faithful citizen is and who is not; who a nationalist is and who an anti-national; who a “naturally” more loyal citizen and who seditious and traitorous.

A more sophisticated idea of persuasion is at work when the collective is extolled to be a partner in the making of a new India. Masses are enlisted as teammates and persuaded to become collaborators in a cycle of self-perpetuating myth that sanctions violence and exclusion and gives it a moral purpose. The power and reach of sovereign sanction behind this version of nationalism is expressed in another Facebook meme: Gaddaron ke seene pe chot karoonga/ rashtravadi hoon/ Modiji ko report karoonga (‘will hit traitors square on the chest/ am a nationalist/ will report to Modi’).

This is where we are at after 75 years of Independence. No country for my nationalism.

Rajshree Chandra teaches Political Science at Janki Devi Memorial College, Delhi University. A version of this article can also be found in her book, Competing Nationalisms: The Sacred and Political Life of Jagat Narain Lal (Penguin: 2021).