In the Middle of Modi’s UAPA Dragnet, a Wedding, and Some Fighting Spirit

Anti-CAA protestors and former municipal councillor Ishrat Jehan was released on bail to enable her to get married on Friday. When the week is over, she will go back to jail until her trial for offences under the draconian anti-terror law. 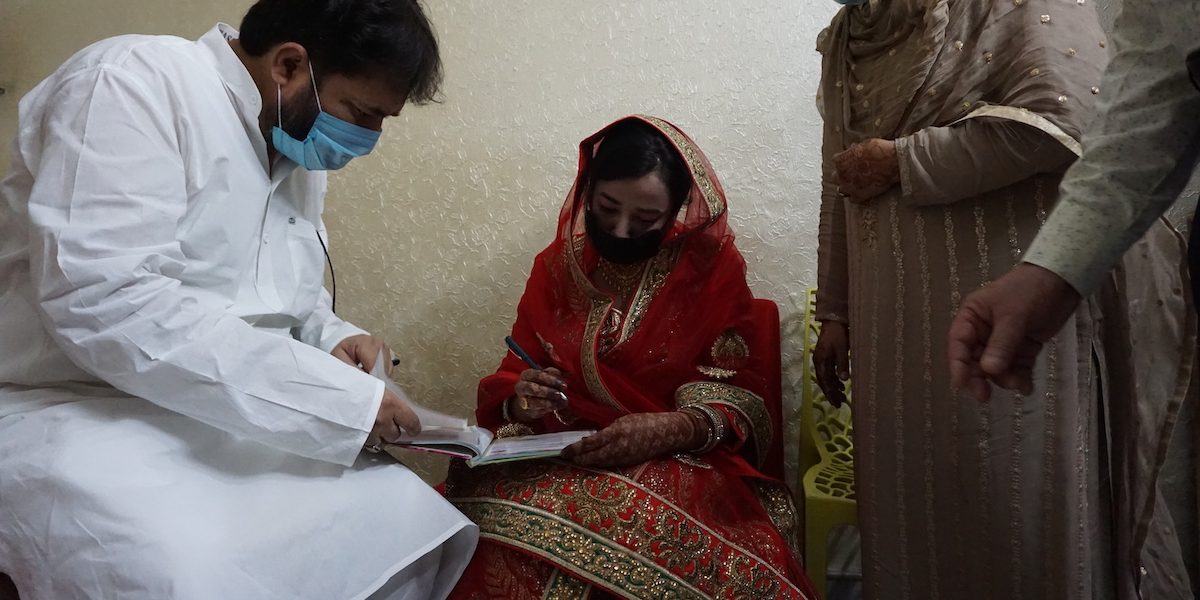 Ishrat Jahan signing the nikahnama. She is out on bail for her marriage. Photo: Aparna Kalra

Pandit is standing in the sweltering heat, in the middle of a global pandemic, in a narrow lane, arranging chairs, water, food, and supplying his own brand of juice to the limited number of guests invited for Saleem’s sister’s wedding. Pandit is the first to get to know when the groom’s party is about to arrive – it is now only 15 minutes away. So a bearer with bottled sanitizer in hand and mask on face is posted at the house’s entrance. 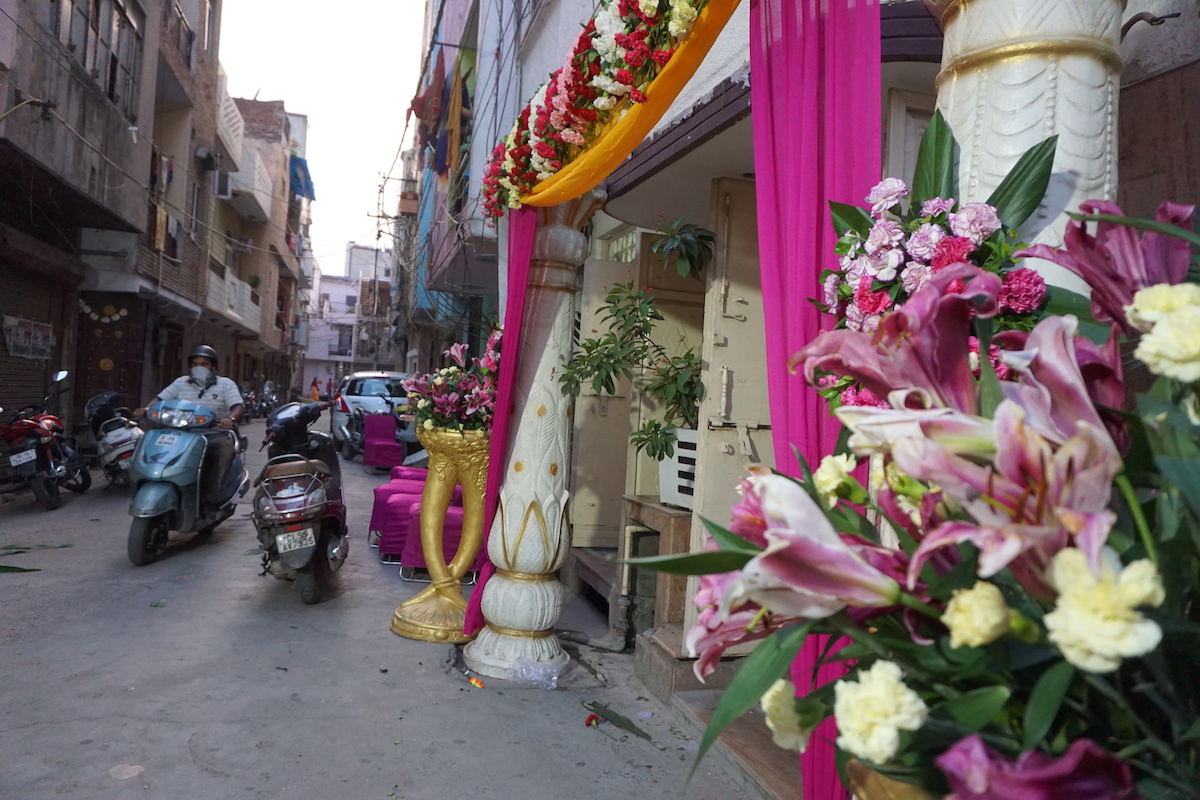 Parvez wanders out of the house, the easy camaraderie is obvious although the men exchange only a few words.

Parvez’s sister is one of the surprisingly high number of women jailed and charged with a strict anti-terror law, charges which lawyers say stretch the imagination. The women had protested but not indulged in violence. The government was clever in locking them up during lockdown; but charges nailing them are based on secret informers. Hearsay is often inadmissible in courts.

The court battles are on. What matters to both sides is: who is winning the battle of the mind?

The answer, though still elusive, can be found in this bylane of Jagat Puri. 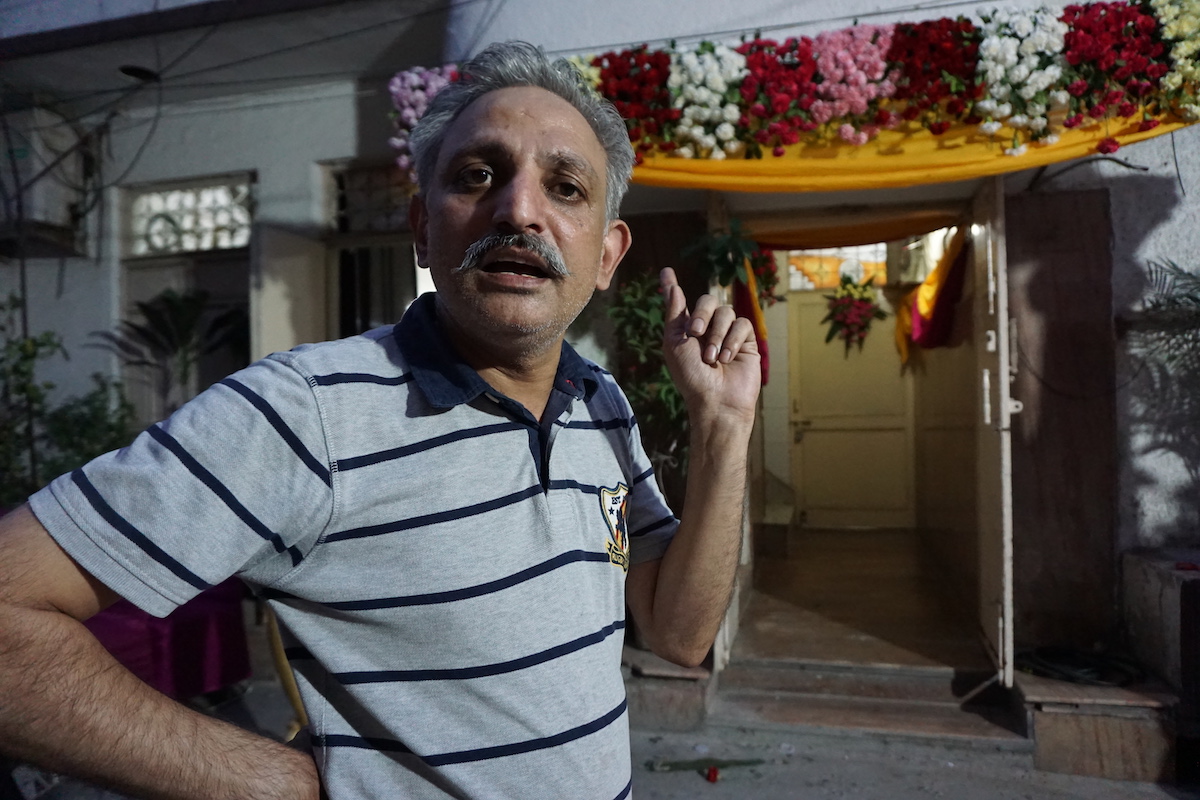 Rahul Pandit, a neighbour of 30 years and Saleem’s friend, helps with the arrangements. Photo: Aparna Kalra

Rahul Pandit, sweating, running around, is willing to pause and discuss the bride’s political journey with me. Ishrat Jahan has been a municipal councillor, winning a seat in 2012 in allegiance to the Congress. “She spoke to me with delight when she got the ticket. I said I have to help her win”. He mustered all the support that he could.

Here’s the interesting part. Pandit is a BJP supporter. That, by and large, means Pandit leans right in his ideology. “What is the problem with CAA-NRC?” he asks, as he gives out instructions that chairs be moved to receive the groom’s party.

He says Ishrat should keep away from “dirty politics” which is the politics of CAA.

‘Got a fight on our hands’

Upstairs in the house, while I wait for a glimpse of the bride, I buttonhole the brother for what he has gone through. Ishrat has a one-week bail window for her marriage but then she goes right back behind bars. She was first arrested on 26th February, granted bail on 21st March and charged with UAPA on the same day, a pattern followed in UAPA arrests that covered students of Jamia Millia Islamia and activists of Pinjra Tod.

Saleem Parvez is shaken by the draconian anti-terror law used against Ishrat but undeterred in spirit.

“Hum larenge bhi aur politics bhi karange. (We will fight the legal battle, and we will fight politically too)”.

He says the family’s record is clean.

The CAA was seen by Muslims as an attempt to disenfranchise them, capping years of systemic violence against them.  Social media has been abuzz with how Indians have been vocal on #BlackLivesMatter but not supportive of a community discriminated against in India. #MuslimLivesMatter did not trend in India but street protests against CAA did acquire a pan-Indian character, sweeping up campuses countrywide and then digging in at a women-led sit-in at Shaheen Bagh, and other places in Delhi. 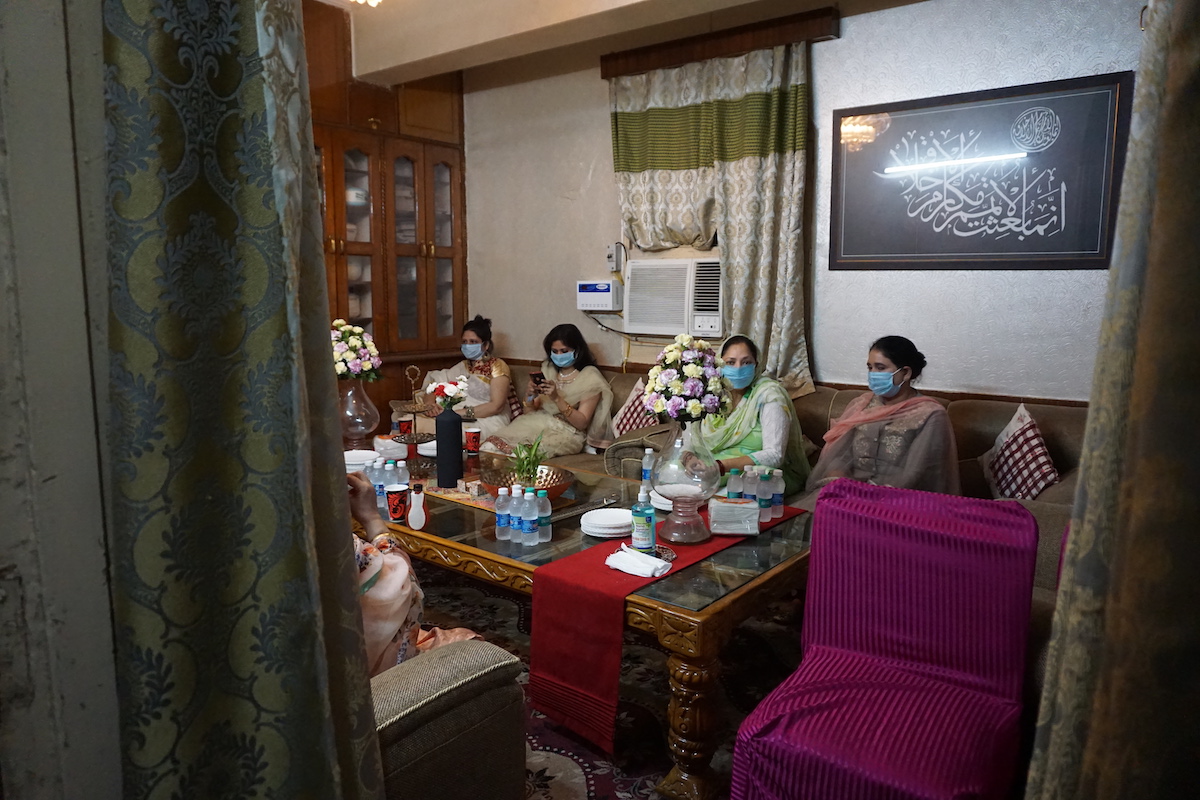 Ishrat was arrested for refusing to budge from one of the anti-CAA protest sites in Delhi. “At the bare persusal of both the FIRs, no overt act and no specific role has been assigned to the applicant except allegedly making a statement – ‘will die but will not move from the protest site, whatever the police do’ – said the appeal filed for Ishrat’s bail by lawyer Lalit Valecha in the Patiala sessions court.

Ishrat Jahan’s mother is not happy to see her child tie the knot in such trying circumstances: a pandemic and prison. She says her daughter was persuaded to act as a leader by other women who knew her as as councillor.

The bride is finally ready, the place is abuzz with children of all shapes and sizes.  and as the clergyman knocks on her door to get Ishrat Jahan’s signature on the nikahnama, I push in too. There she is, smiling, resplendent.

I want to ask her about jail. Did the incarceration scare her? “Yes,” she says. “My brother has supported me a lot”.

I tell her about Rahul Pandit’s reservations about her political aspirations. “But he is a big fan of mine,” the bride grins cheekily.

I feel this woman does not scare easily. No woman should, whether fighting with god in the world above, or the government in the world below.