With Its Photo Albums, Kashmir Resists and Remembers

Kashmir's men and women refuse to forget their loved ones. In their absence, they cherish their portraits, mugshots and the family collages they once posed for.

The struggle of memory against forgetting is one that has marked the movement in Kashmir.

“What heart is that doesn’t pray to be with you, God forbid, shall I be away from you and alive, never let that happen!”

The azadi movement in Kashmir is not just a struggle for justice, it is also a struggle of memory against forgetting. I have been collecting and archiving family photographs and investigation documents related to the victims of enforced disappearances in the Valley of Kashmir.

Every photograph we make becomes a memory, a record of the past. Through this archive, I have tried to understand the ways in which remembering becomes resistance.

When it is uncertain whether a victim is alive at all, the family seeks solace in going back to these photographs and in the hope that they will come back one day. In this unending political conflict, the families’ resistance is in remembering their loved ones and in refusing to accept that they are no more. 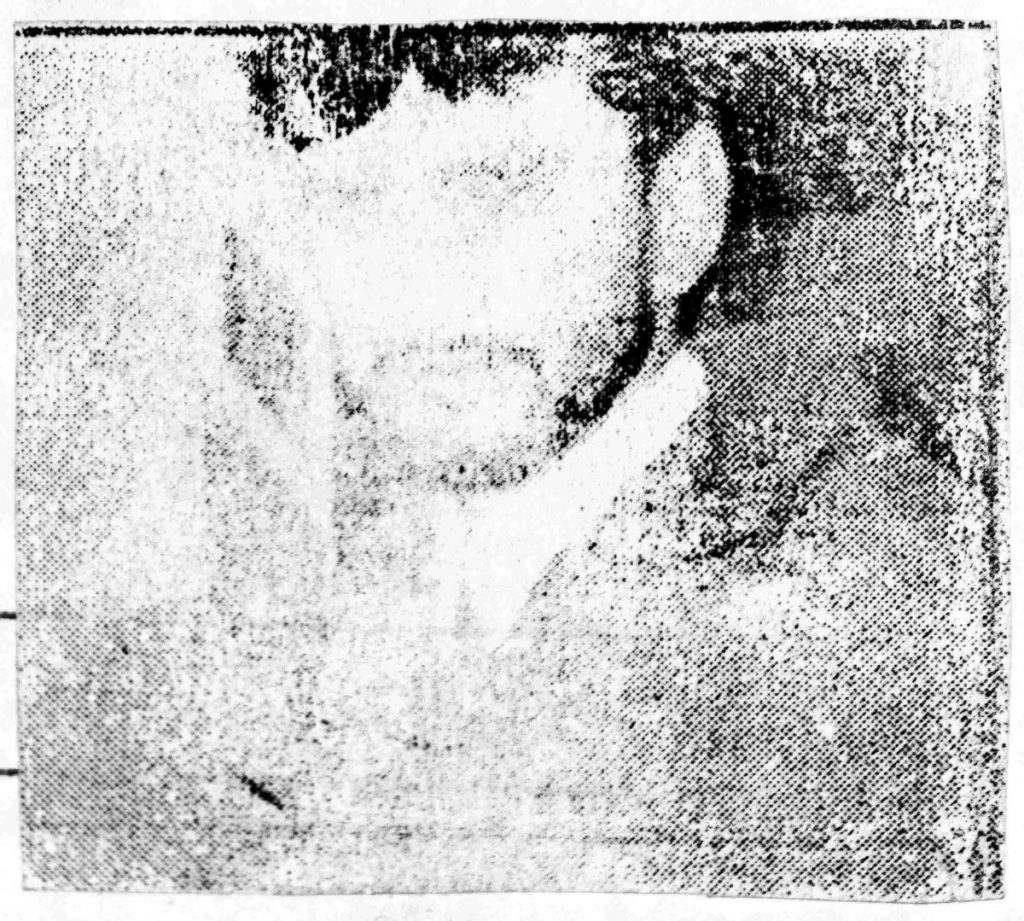 Forgetting is forgiving for many of Kashmir’s separated families, who would rather remember.

I worked with the Association of Parents of Disappeared Persons (APDP), a movement created by Parveena Ahanger to bring the voices of families together to fight for justice.

APDP stands as a movement to remember human rights violations by the Indian security forces in Kashmir. I once asked Ahanger what ‘justice’ would mean for her and the families of the victims. “Give our children back to us, can India do this?” she asks. I could only answer her question with silence, which is how the Indian government has also reacted to their demands.

For these families, to forget is to accept the injustice around them, to succumb to the oppressor’s power. Remembering, on the other hand, makes them stand up and fight for justice. While the families push themselves to believe that their children are coming back, the photographs remind them of the void created by the politics of powerful states.

While working on this project, I realised that we create images with a motive – usually to capture the happiest moments of our life – but it is not for us to know what purpose these images will serve in the future. One thing that I was sure of is that it was not always nostalgia.

When I visited the victims’ families, I saw a mother’s determination, a wife’s fight, and Kashmir’s resistance against this structural violence surrounding it. Some families did not have a proper photograph where every member could be present, so they made a family collage. These gestures showed how important it was for them to remember the injustice. To remember is their resistance. To firmly believe that their loved one is still alive somewhere in some prison is their revolt. 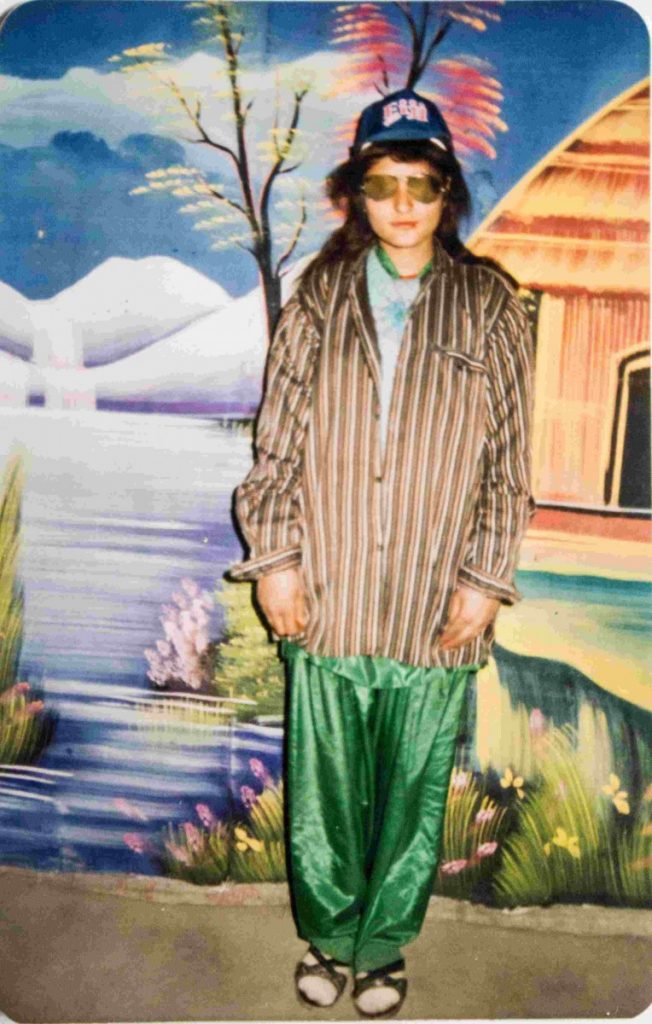 Zeena Begum wearing her husband’s shirt and posing in a studio.

Often, I browsed through personal photograph of couples where the husband had been taken by the Indian security apparatus and the wife was left with the children. One of the stories that made a mark on me was Zeena Begum’s. Zeena, the wife of Abdul Rashid Parra, is far from forgetting her husband and their blissful marriage. She told me that her husband, one day, made her dress up for a photoshoot in a hat and shades!

Thoroughly embarrassed with the costume, Zeena remembers feeling uncomfortable. Now, however, she just wishes he was here, coaxing her into participating in a similar photoshoot. From their first vacation to the popular tourist spot of Dharibal to the everyday experiences of her marriage, Zeena remembers it all. When I asked how she was coping with his absence, she said it was a depressing ordeal, one that had made her lose all hope in life, except for her children.

Every case file in APDP’s archive had a mugshot of the missing person. Most of these mugshots were cut-outs from a family album. This made me realise how a personal moment, like a wedding portrait of a person, gets transformed into investigative material – which clearly is not the reason for which it was created. Yet, these are the unexpected losses which families in conflict zones suffer. 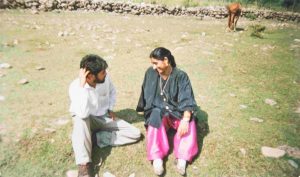 Abdul Rashid and Zeena Begum on their first vacation after marriage.

These photographs, in spite of bringing out personal pain and memories, also open the doors to a mystical world. The images portray an ideal Kashmir behind the figures in the forefront. A person poses before a beautiful landscape at a studio, where Kashmir is portrayed as this ideal place where you can live a happy life with your loved one. But the reality is upfront, in the faces of the people, and it often eludes us.

This land has been made into a never-ending conflict zone by India and Pakistan. The solution could have been very simple if we were not so possessive, but unfortunately, our misplaced notion of patriotism and our lust for the land of Kashmir (with far less regards for its people) has long since become cruel and inhuman to Kashmiris. We would rather look at the beautiful scenery of Kashmir and much rather neglect the humans in the foreground of these photographs and the violations of the rights of these humans.

Kashmir has witnessed political installations of puppet regimes and Army rule throughout. The autonomy of the state of Jammu and Kashmir has been severely eroded by what Haley Duschinski and Shrimoyee Nandini Ghosh have termed ‘occupational constitutionalism’ or occupation through India’s constitutional moves.

The violence of political repression has fuelled the desire for azadi. This resistance moment, I feel, is strengthened because of the memories which survive among the people of Kashmir.

Hearing the stories behind each photograph had made the task of looking at the archive more personal than political for me. A personal family album can talk about the political aspects of a conflict. These personal photographs can be used to talk about a conflict. A conflict also rages over whether to forget or forgive.

I also flipped through my own family album. What if I was taken some day and my mother and father were left without closure? This is the unbearable trauma people living in this unending conflict zone have to live with. 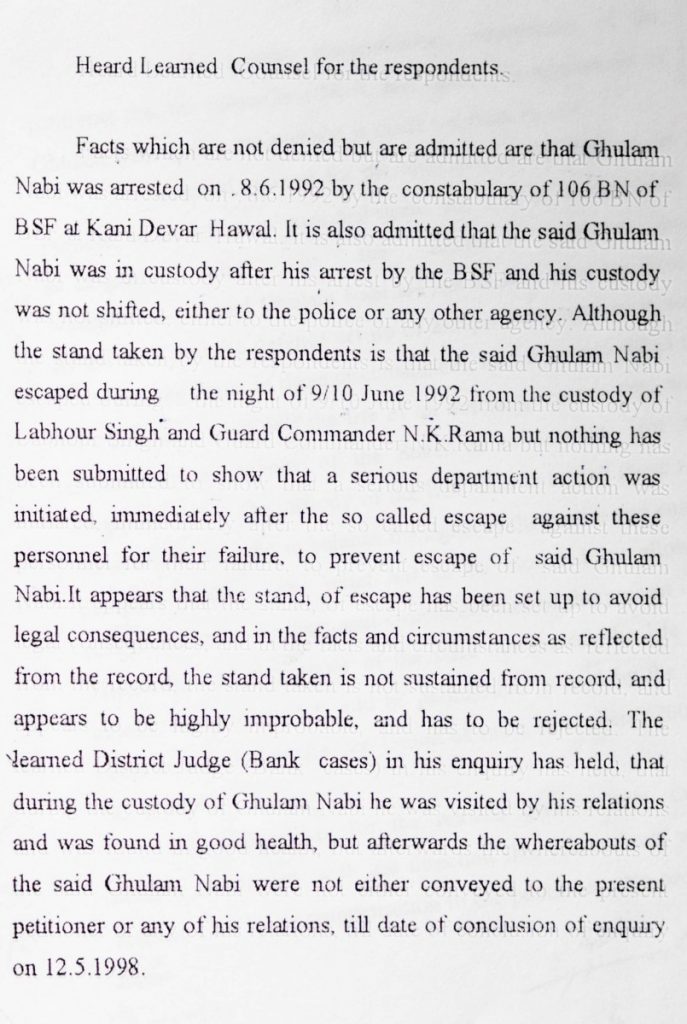 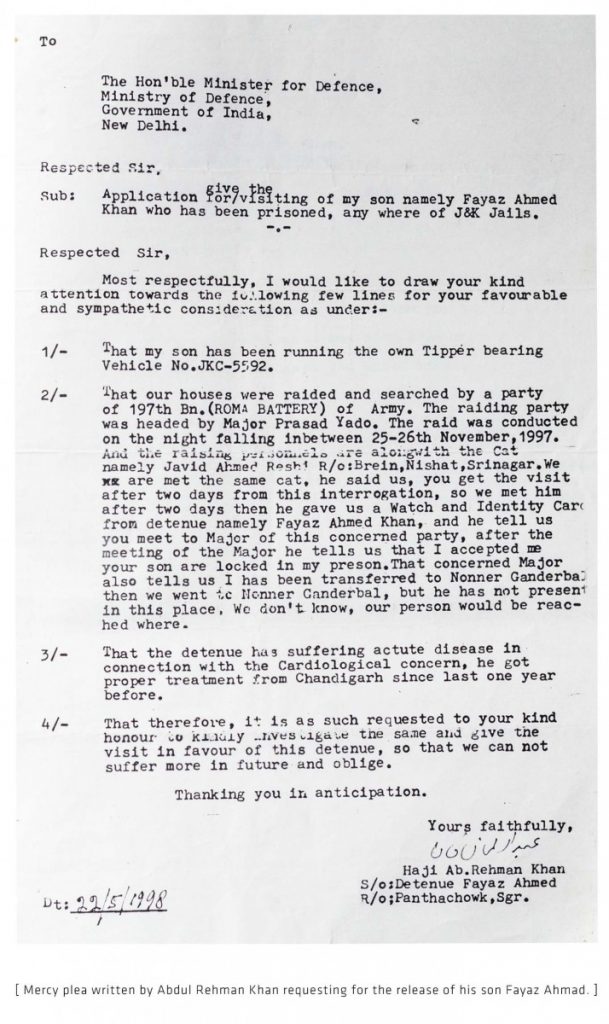 An application by Abdul Rehman Khan to the Defence Minister, requesting permission to meet his son Fayaz Ahmad. 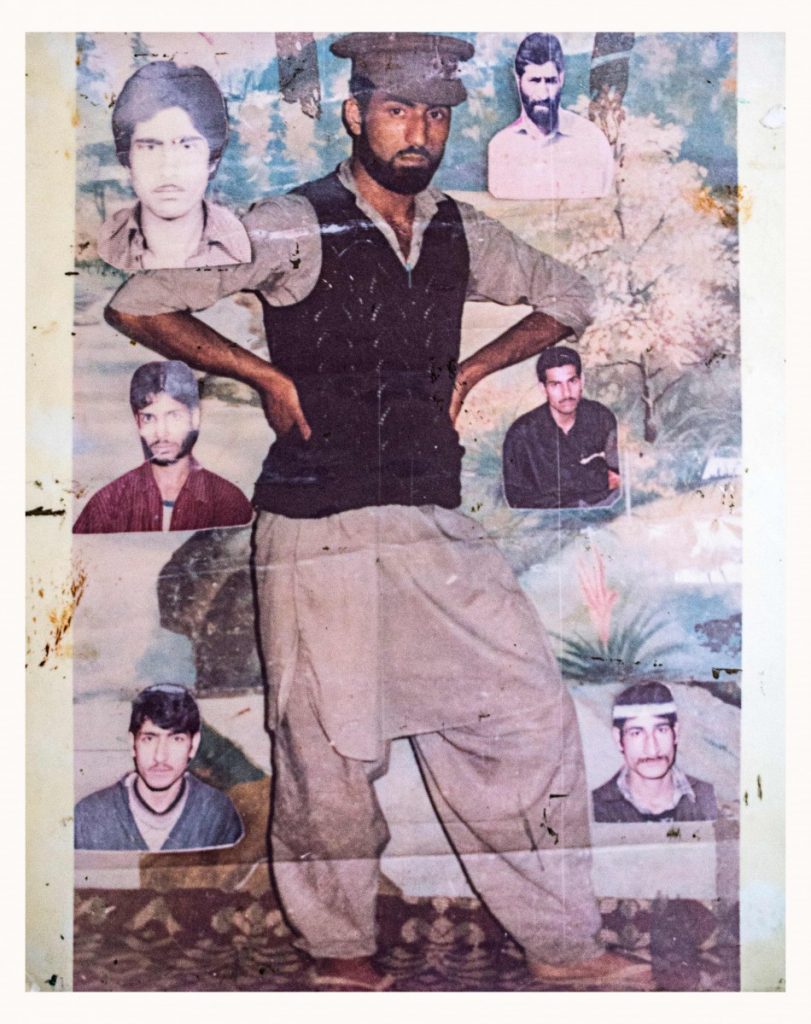 Basheer Ahmad Sofi was the last of Hajra Begum’s sons to be taken. He was taken by the 14 Rashtriya Rifles from a baker’s shop in Onagam, Bandipora. Basheer occupies the centre of this collage. His brothers (clockwise) Naseer Ahmad, Mohammad Rafiq, Fayaz, Ijaz and Farooq, all feature in it. 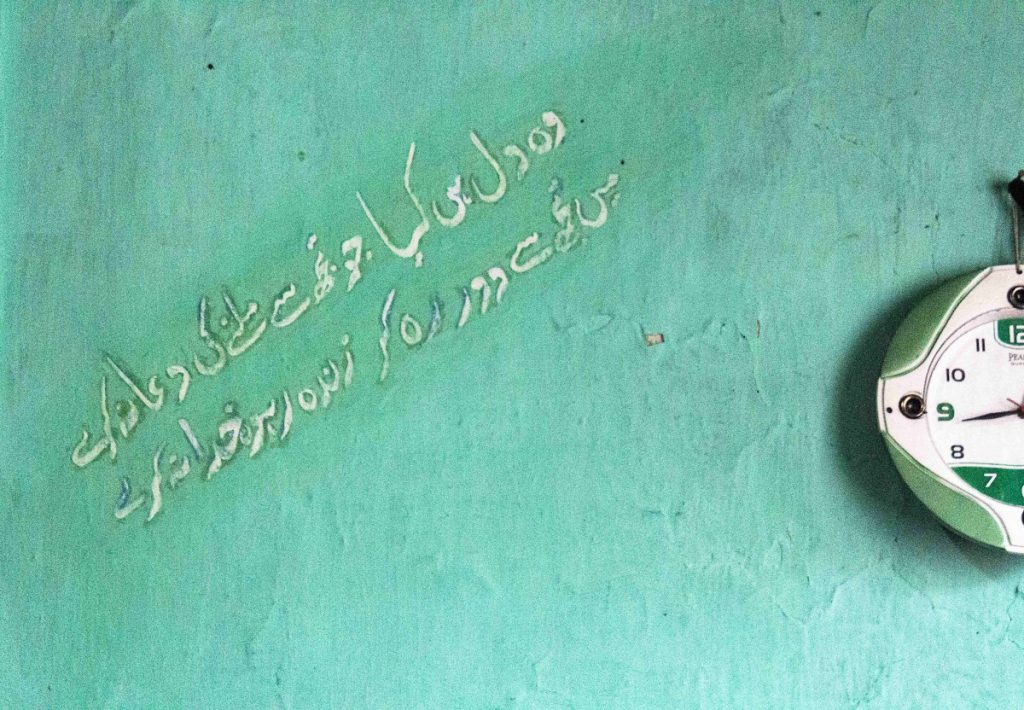 Basheer Ahmad Sofi’s poem about missing a loved one, written on a wall in his house. “What heart is that doesn’t pray to be with you, God forbid, shall I be away from you and alive, never let that happen!” 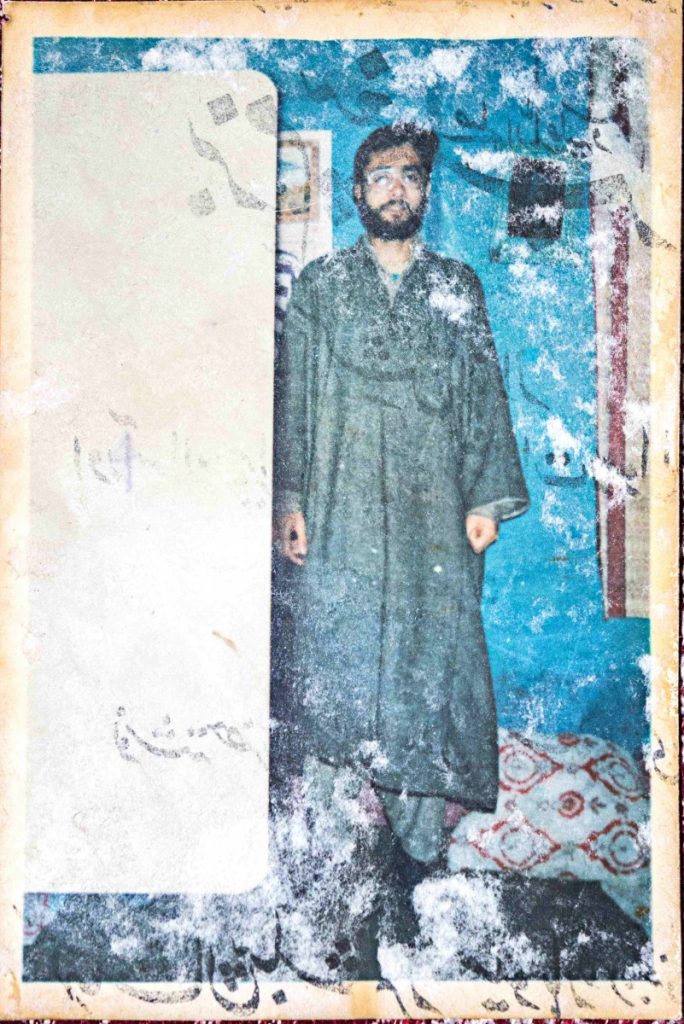 Bashrat Saleem Parray was 18 years old when he disappeared. He was returning home in Sonwar, Srinagar after evening prayers at a mosque nearby. Witnesses on street claimed he was taken away by security forces. The military said that he had been killed when he tried to cross the Line of Control to enter Pakistan. His photograph was not found in the Army’s list of people ‘encountered’ near the border. 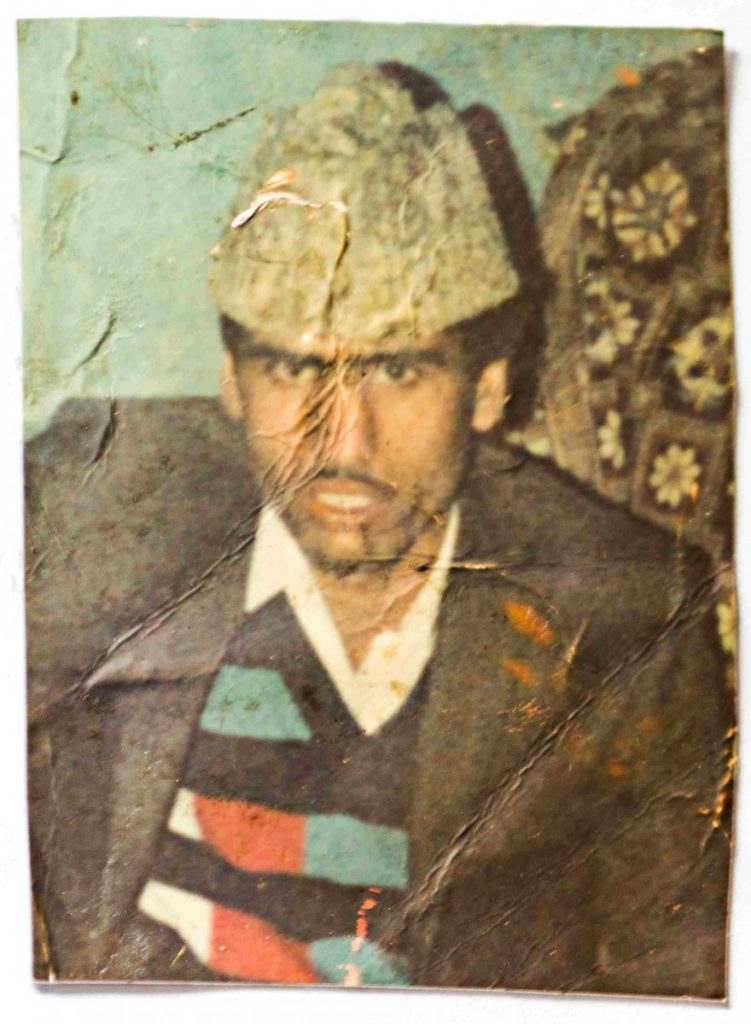 Farooq Ahmad was mistaken for a rebel who had the same name and was taken by BSF officer Jaswant Singh from Shankarpora, Srinagar. His family says they were initially granted permission to meet Farooq, but later Singh denied his arrest. Six months after Farooq was taken, his nephew joined a rebel organisation and was killed by the Indian security forces. He has two sons Hilal and Ishfaq with his former wife Sara who has remarried after he was taken. Abdul Rashid Malik was 18 years old when he was taken from his home in Kupwara district. Two Intelligence Bureau officers reportedly took him and handed him over to the 66 BSF Camp in Kupwara. Abdul Rashid is seen here holding a baby and posing before the Kashmir landscape in a studio. 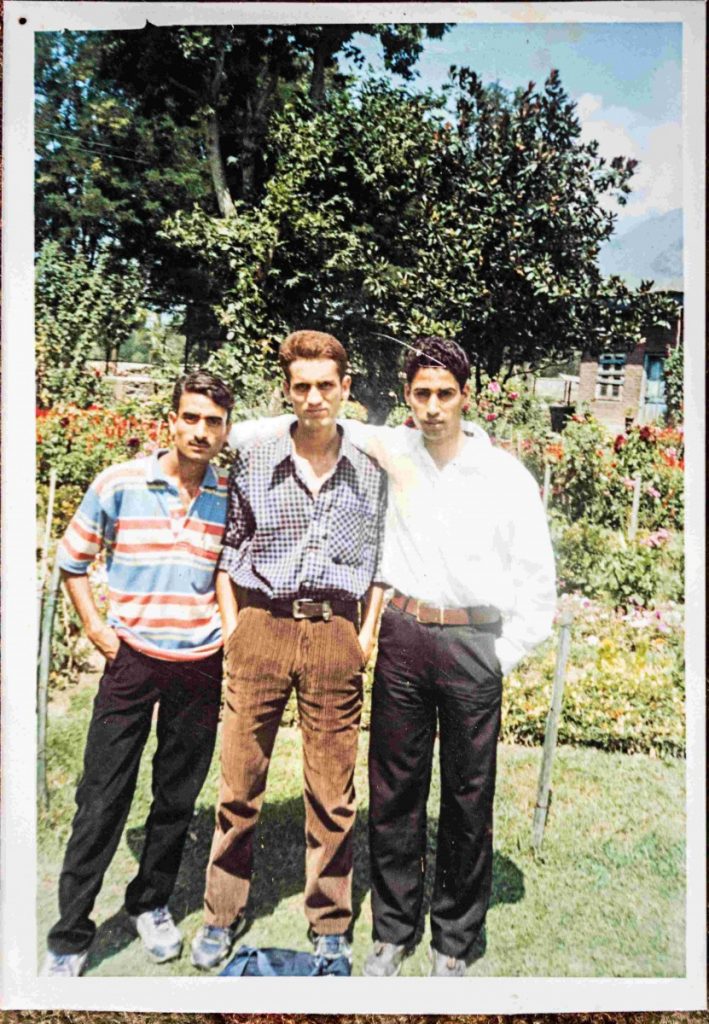 Abdul Rashid’s brother (in the white shirt) with his friends. A lecturer at a Degree College in Kupwara, Abdul’s brother was so psychologically affected by his brother having being taken that he began scribbling provocative text and sketches on the walls of his house.

“After Abdul was taken, his brother started scribbling on the walls of our house. We tried many doctors but couldn’t get him back to his normal,” says their sister Saymu Rashid. Manzoor Ahmad of Mandi Chattabal, Srinagar, was taken away by Indian security forces. His aunt Khatija remembers the night when forces cordoned off the whole locality and barged into their house at around midnight. An officer named ‘Malhotra’ from the 35 Rashtriya Rifles told her that Manzoor was being taken away for an identification parade. According to an inquiry conducted by the Inspector General of Police, Manzoor was a former rebel. He had returned to Kashmir after his parent’s death and become the sole earner for his aunt’s family. Individual photographs of Manzoor, his aunt Khatija and his cousins were stuck together to make a collage that could double as a family photograph.

Siva Sai Jeevanantham is a student at the National Institute of Design.