In Kerala's Attappady, Adivasis Are Being Excluded From Development

A pregnant tribal woman recently had to be carried for nearly 8 kms to reach a proper road to get to the hospital, an incident that is all to familiar to the region that is still awaiting basic infrastructure. 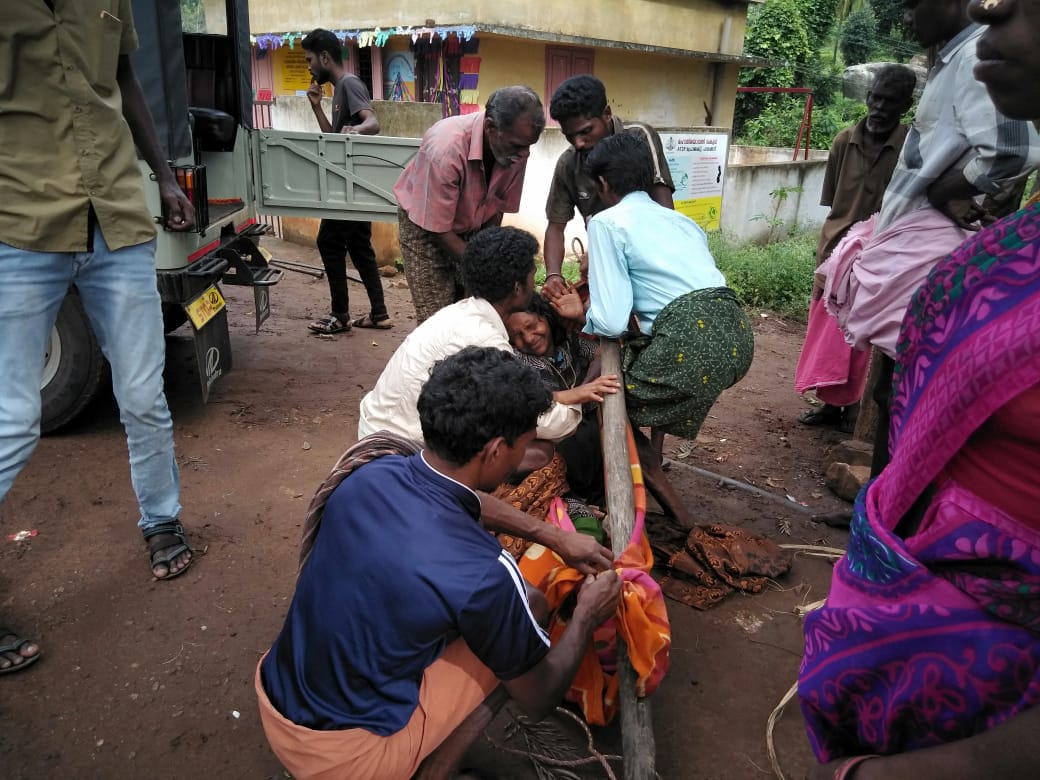 A pregnant woman in the region had to be carried on shoulders for 8kms due to lack of proper road and ambulance. Credit: Dattes Velayudhan

Atappady (Kerala): Panali, a 35-year-old tribal man in the Edvani area of Nilgiri Hills in Attappady, Kerala, along with his relatives, had to carry his pregnant wife on his shoulder for eight km to reach a place from where he could get a vehicle. The woman – who was experiencing labour pains – was carried in a sheet tied to a long bamboo stick.

The lack of a tarred road and the alleged delay in the arrival of an ambulance from the hospital forced Panali and his family to take this extreme measure.

The incident occurred on Tuesday, June 5.

“We were tense. She was crying and screaming like anything. We were literally running with her. We had to cross the same Varakar river four times to reach from the top of the mountain to where we could get the vehicle. We thought we will not make it. But with the Almighty’s and forefathers’ blessings, we reached the point and she delivered a baby girl at Kottoor Tribal Hospital. Both mother and baby are fine now,” Panali told The Wire.

According to Ramu Thampu, president of Kerala Adivasi Aikyavedi, an NGO working for the welfare of Adivasis, such incidents will continue because tribal areas don’t have any tarred roads.

“There are 38 families in the Edvani area. They don’t have a tarred road till Swarnagadha. So only a 4WD jeep can reach their settlement. That too after crossing the river four times. Now that its the rainy season, it would be slippery, and rivers will be flowing wild,” Thampu added.

According to Thampu, around Rs 9.78 crore was allotted by the Central government in 2013 for the construction of motorable roads. However, the work has not yet begun.

“When child mortality rates were going up due to such incidents in 2013, the then central minister Jairam Ramesh visited the area and allotted money. But it has not been used,” Thampu alleged.

Meanwhile, Panali’s relatives alleged that they there was a delay in ambulance arrival.

“We had informed the Public Health Centre at around 6 am on Tuesday (June 5). But they didn’t send the ambulance. That’s why we had to carry her,” the relatives alleged, adding that if they had waited for a few more hours, they would have risked the lives of both mother and baby.

However, Dr Mathew Pudhur told The Wire that they were informed about the requirement at 8:30 am and that they sent the ambulance then.

“But on the way, we found that Panali had hired a jeep and they were coming. So, we joined them and rushed to the Kottoor Tribal Clinic,” the doctor said.

Ajay Kumar V.B., a Dalit rights activist in Thiruvananthapuram, who frequently visits Attapady, told The Wire that there are good roads ‘all over’ the area, but only where rich migrant planters are settled.

“There are good roads, but they will end where the Adivasis reside. And interestingly, these good roads are made for the rich migrant planters from south and central Kerala, using the fund allocated for the Dalits and tribes,” Ajay Kumar added.

“Now, why there is no road in Edvani is that because there are no rich migrant planters,” Ajay Kumar said, adding that there is an unusual theory behind it.

“Tribal people have been told by the police that if good roads are made, then Maoists would come out from the forest easily and attack people,” he said.

According to a report from IndiaSpend:

“Attapady is like an island of backwardness in a state known for its progressive social and development indicators.

Kerala’s human development index (0.79), resulting from improvements in the fields of sanitation, health, education and poverty reduction, is the highest in India.

Attapady’s hamlets, however, cannot access the public systems that make these figures possible because of ineffective state interventions.

The living conditions of Kerala’s tribals are on par with those in backward states such as Chhattisgarh, Bihar and Jharkhand, according to Census 2011.”

IndiaSpend had found through an investigation in September 2016 that unplanned disbursal of resources in India’s tribal regions has meant that over the last 35 years, the Rs 2.8 lakh crore ($42.6 billion) set aside by the government as special funds to improve the lives of Scheduled Castes (SCs) and Scheduled Tribes (STs) was simply not spent.

“Kerala’s tribal population – 44.3% – lives below poverty line, according to Ministry of Tribal Affairs figures (2013). The state’s average for homes with toilets is 95.4% but 49% of its tribal homes do not have toilets – the national average is 60.4%.

Half the state’s tribal population does not have access to clean drinking water while the state average for the same is 33.5%.

Low mortality in Attapady co-exists with high incidence of morbidity – number of persons reporting ailments in rural Kerala is 255 (per 1,000) and urban Kerala is 240 (per 1,000) whereas the all India average was 88 and 99 for rural and urban areas, respectively, in 2004.”

Jayaseelan Raj from the Centre For Development Studies said that the state’s funds are not being used for setting up the needed infrastructure.

“First, we isolated them (the tribals) by depriving their rights on forest and land. Second, we provided them unwanted infrastructure. State decides what they need. That’s where the problem lies,” Raj said.