In Kashmir, No Door to Knock for Occupants When Encounters Reduce Homes to Rubble

Houses destroyed in anti-militancy operations are rebuilt by villagers themselves in the absence of any proper compensation from the government or security forces. 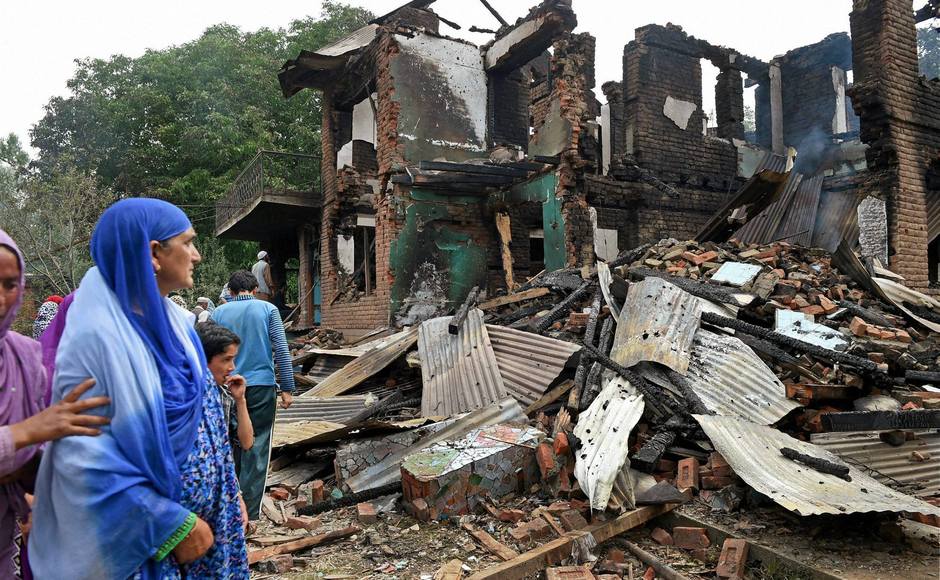 Pulwama: Remains of a house destroyed in an encounter between militants and security forces at Bahmoo village of Keller, 60 kms from Srinagar. Credit: PTI Files/S.Irfan (PTI7_4_2017_000196B) 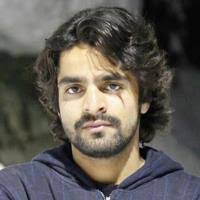 Srinagar: When Niyaz Ahmad Lone’s house in Shopian was surrounded past midnight in early spring this year by soldiers and armed personnel from the anti-insurgency wing of the Jammu and Kashmir Police, he took a quick look at his belongings before stepping out. The army had been making announcements on loudspeaker, directing Lone and his family to come out. He didn’t take anything with him but his family. When the soldiers outside quickly took them away to another location, Lone knew what was imminent.

By evening, the encounter between the militants trapped inside Lone’s house and the security forces was over. Three militants were killed and Lone’s entire house was razed to the ground.

Lone was not the only one to see his house being reduced to rubble on April 1. In two neighbouring villages, two other houses were destroyed by the security forces by the end of that day.

The practice of destroying buildings and other structures during gun battles is not new in Kashmir.

IndiaSpend estimates that as many as 105 houses have been destroyed since 2015 in encounters in Pulwama district alone.

Dreadful though this statistic is, it was not uncommon – during the height of militancy in Kashmir in the early 1990s – for several houses or even entire colonies t0 be burnt down by the security forces.

For example, in January 1993, after a convoy of the Border Security Force (BSF) was ambushed by militants in north Kashmir’s Sopore town, the BSF set the town on fire. More than 45 people were killed that day. In another case, several shops and houses were set on fire by the security forces in Baramulla’s Pattan town on August 1, 1990. 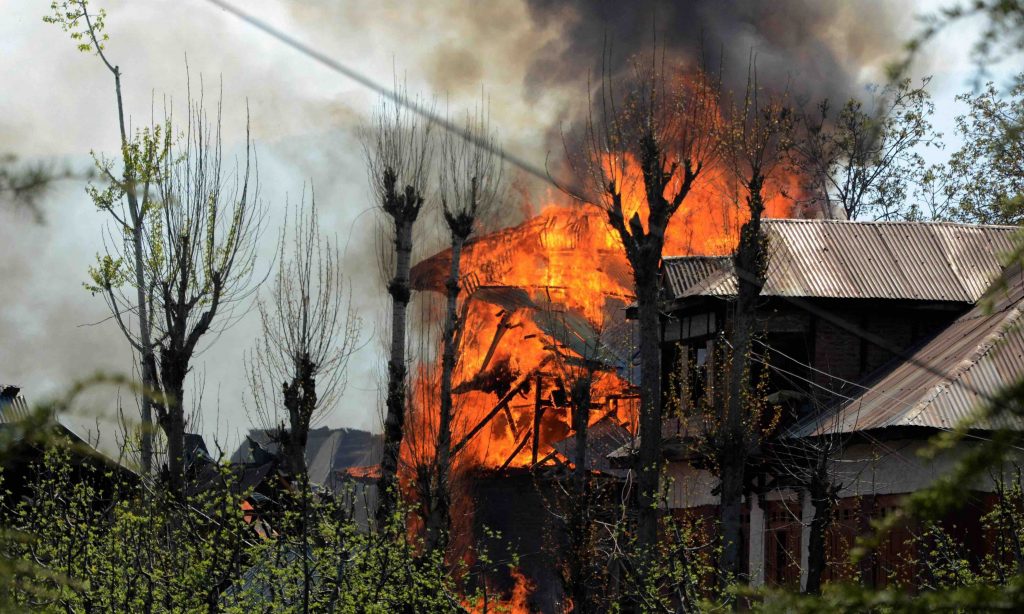 Houses on fire after a gun battle between security forces and militants in Shopian, South Kashmir. Credit: PTI Files/S. Irfan

Khurram Parvez, who  chairs the Jammu and Kashmir’s Coalition of Civil Society (JKCCS), believes the civilian properties caught up in “encounters” are being destroyed by the security forces in a deliberate and wanton manner because manner in which an entire home is levelled does not seem proportionate to the situation.

He said there appears to be no regard for any consideration of any standard operating procedure or principles to be followed. Further, in some cases, “it appears to be a clear instance of “collective punishment” being meted out to the civilian population,” Parvez noted.

In most cases involving destroyed houses, the compensation offered by the government to the victims involves hurdles at two levels. Usually, such victims are denied any monetary relief because they are accused of “sheltering” the militants. And those who pursue their case long enough are paid a meagre amount that does not suffice to rebuild what is lost.

In the face of this official apathy, a trend has emerged in the valley of ordinary people pitching in to help the owners of destroyed houses rebuild their homes.

A day after Lone’s house was torn down, for example, villagers generously donated money and the figure was in lakhs by the evening.

Lone did not apply for compensation from the government, nor did the villagers seek donations from anyone outside the village.

“This is our loss and we will rebuild [the house] on our own,” a villager told this reporter a day after the gun battle was over.

On May 12, militants entered the house of Bashir Ahmad Bhat in Pulwama and soon the house was cordoned off by the security forces. Bhat and other inmates of the house hastened to leave the house to save their lives.

The gun battle continued for hours. Taking advantage of the darkness, the militants managed to escape after killing a Central Reserve Police Force jawan.

“When the militants fled, one personnel of the Indian army fired at me on my shoulder,” Bhat said.

In a moment of rage, he said, the security forces set his house on fire and everything that was inside his house was reduced to ashes.

Bhat’s hopes were rekindled when the next day local youths started collecting money for his home. By sunset, around Rs 7 lakh was collected.

“I do not expect anything from the government. We will rise again on our own and we will ourselves build what we lost,” Bhat said.

Parvez sees a link between the destruction of homes by the security forces and the rising trend of civilians in Kashmir thronging to encounter sites in order to hamper live anti-militancy operations. People consider militants as their own, he said, and see the army as an occupying force. But they are also attempting to save property that is usually destroyed during such encounters.

A question of humanitarian law

Parvez said that the manner in which the destruction of property takes place would certainly go against international humanitarian law (IHL). “The legal standard for justified destruction of civilian property is high – absolutely necessary for military operations.”

The concept of “collateral damage” under IHL also requires proportionality between the loss – which may be incidental – and the need for a concrete and direct military advantage anticipated.

The legality of the security forces’ action in destroying houses has never been tested as no owner has approached the courts to demand justice or to ask for an enquiry into whether the destruction of her home was necessary.

Parvez said the present situation was exacerbated by the fact that the security forces do not allow for any fair and independent investigation into their operations, as a result of which there is no scope to ascertain the legality of these “encounters” where militant and civilian lives are lost, in addition to causing damage to property.

Since international humanitarian law also forbids combatants from staging operations in such a way that they put civilians in harm’s way, The Wire asked Parvez whether militants also had an obligation to avoid getting into gunfights that would endanger civilians and their dwellings, and whether the JKCCS had raised this issue.
“[We have] always appealed to both the state and non-state actors to conduct their operations within the framework of International Humanitarian Law,” he said, adding that it was based on these appeals that “militants since 2007 unilaterally declared a ban on using the landmines.”
In a report in the Indian Express on May 13, J&K DGP S.P. Vaid was quoted as saying that commandos of the National Security Guard (NSG) could be deployed for “room intervention” during anti-militancy operations and could help prevent destruction of houses.

“Also, if required, (we would) use them at least in the capital city for room intervention rather than bringing down the house. It is an effort to save the houses also,” he was quoted as saying. 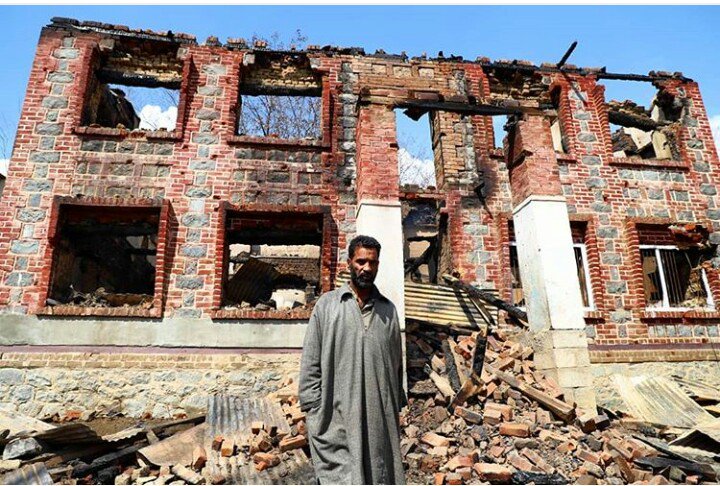 Poet Madhosh Balhami lost 40 years of his literary work, Including his poetry scripts and books, when his house was destroyed during a gun battle. Credit: Twitter/Saif Ali

But many people who have closely witnessed the gun battles at various places allege that the soldiers involved had set the houses on fire after the militants had been killed or had fled the spot. They cite instances likes those of Pulwama’s Kakapora, when army personnel of a nearby camp allegedly surfaced during the night of May 31 and attempted to set on fire the house of Adil alias Waqas Commando, an active militant of the Jaish-e-Muhammad.

“The army put some paddy hay around the house, sprinkled kerosene, and then set it aflame,” some witnesses said.

On March 15 this year, two militants were trapped inside the house of Kashmiri poet Madhosh Balhami in Balhama, 10 km from Srinagar. As the house was surrounded by the security forces, a gunfight ensued and by the next morning, his house had reduced to charcoal and his entire work, mostly unpublished, that he had written over the past 30 years, was reduced to ashes.

Balhami is slowly trying to rebuild his life but his fate is best summed up by one of his own couplets:

Haziq Qadri is an independent journalist based in Srinagar.