On the verge of starvation at the start of last winter, an impoverished family received unexpected help – beyond their wildest hopes. 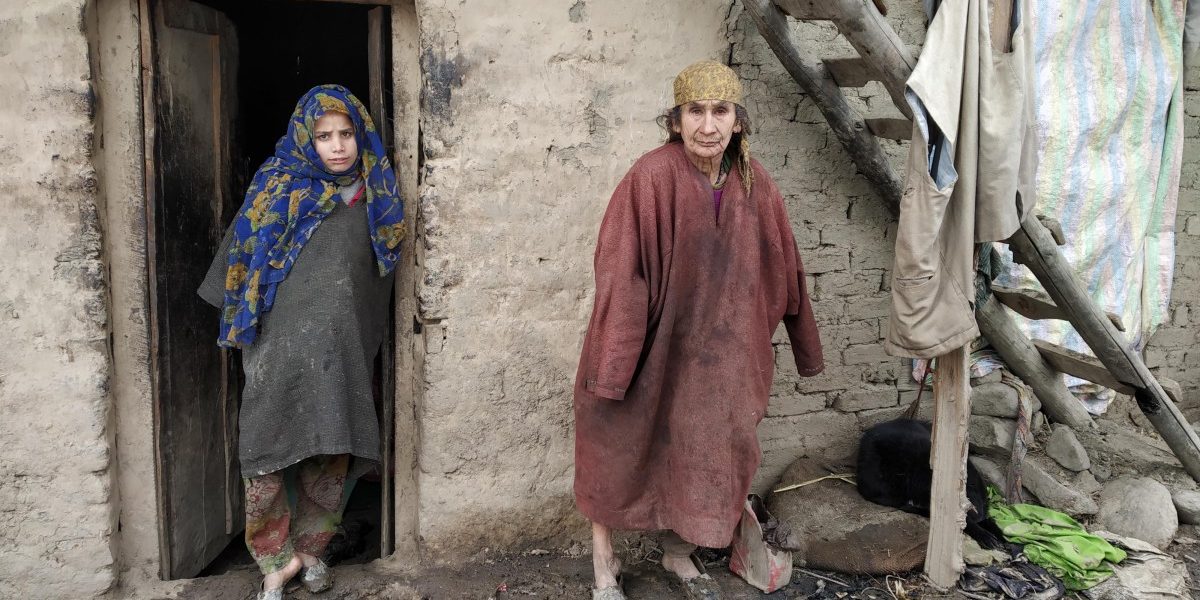 Anantnag: While talking about her past, 68-year-old Raja Begum breaks into tears. She spent her life in poverty. Her husband Mouzudin Bhat, who has a disability, could rarely earn enough to buy food for the family.

Raja Begum lives in Hapatnaar, a village in South Kashmir’s Anantnag district. A narrow, steep road full of potholes passes through lush green mountains on the way to her village. The natural landscape may be stunning, but scores of other families in the village share the same tale of deprivation.

“I couldn’t count how many times my family slept without food. It always gave me and my husband immense pain,” says Raja, sitting by the hearth fire. “Poverty is the worst thing possible.”

Mouzudin was disabled when he broke his right leg in a fall at a building site eight years ago.

Raja’s shattered house is built of mud, with a roof of rusted tin sheets. Until her doorstep, shoes sink halfway into the slippery mud, making the path dangerous for children and the elderly. The condition of the house reflects the vulnerability of those who live there.

Raja’s two sons, Javaid Ahmad and Fayaz Ahmad, are both labourers who live nearby. “They were also living destitute lives. My husband and I preferred to live separate. Our conditions didn’t allow us to live with them,” says Raja.

Six months ago, in a blow to their precarious existence, Fayaz was detained by the police in Jammu on charges of illegal drug trafficking. Raja’s daughter-in-law and grandchildren now live with them.

“Poverty compels you to take extreme steps, especially when you are the only earning hand. Fayaz was trapped. Someone took advantage of his poverty, and he became a scapegoat,” she said. “I couldn’t see my son’s family suffer. I had to take care of my grandchildren.”

When yet another season of snowfall began in December 2018, Mouzudin was worried. He had nothing to feed his wife, daughter-in-law and grandchildren. They didn’t even have warm clothes for the cold. “We starved for six days,” says Raja. “We had only salt tea, without milk. Our grandchildren were constantly asking for food. And they were shivering from the cold.”

In mid-December, however, a migrant pandit happened to visit the village. Ranjan Jyotshi had returned to the Valley in 2010 under the Prime Minister’s Relief and Rehabilitation Package, and learnt from a young villager, Muzaffar Ahmad, about the plight of the family nearby.

“Their condition brought tears to my eyes,” Jyotshi said. “They were starving for days, including those small children.”

Jyotshi bought rice, milk, vegetables, bread and other essential commodities to last them a few weeks.

The next day, braving a cold wave, Jyotshi and others returned to Hapatnaar and delivered the provisions to the desperate family. “We did this for humanity,” Jyotshi tells The Wire. “Since we returned to the Valley in 2010, we have seen much support from our Muslim brothers in Kashmir. They held their arms wide open for us in a gesture of love.”

Jyotshi also shot a video of the family and posted it on Facebook, along with Mouzudin’s bank account details. “Kindly help the family of Mouzudin Bhat,” he wrote. “The family is starved for days. Come forward to serve humanity. Service to humankind is service to God.”

The post went viral. In little time, it was shared by 2,400 people – and Rs 17 lakh poured into the family account. Scores of people reportedly travelled to Hapatnaar to help the family.

Raja and Mouzudin were speechless. They have since been able to make plans for their future. “I am deeply thankful to the pandits,” Raja says. “I don’t know who and how many people put money in my husband’s bank account. All I can say is humanity exists in our Kashmir. It exists.”

On the night of January 28, Mouzudin died, leaving the funds to his family – divided equally among his sons and his wife.

Also read: In Kashmir, a Child Gained in a Miracle and Lost to Militancy

“I went to see Mouzudin the same night. He seemed fine. He told me to take him to a good doctor. He also wanted to meet his son who was in jail in Jammu,” said Muzaffar, another resident of the village. “He died of a heart attack. But he died happy.”

A few days after Mouzdin’s death, police released Fayaz. He rejoined his family. Fayaz now lives with his mother.

“Ranjan turned out to be a saviour for the family,” says Muzaffar. “He didn’t only rescue them from starving – it seems like he reunited the family as well.”

All images by Aamir Ali Bhat.