If India Produces More Foodgrains Than It Needs, Why Are People Still Starving?

It is set law that procedures cannot impact vested substantive rights – and the right to life and correspondingly, food, is the most substantive of all rights. 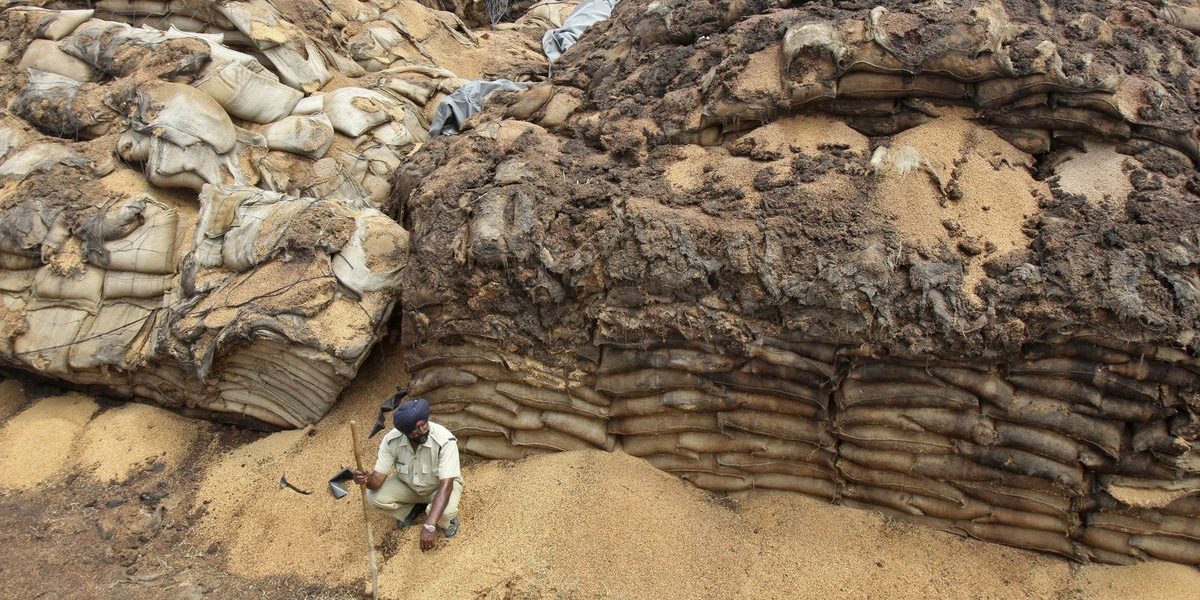 According to an RTI reply given by the Ministry of Consumer Affairs, Food & Public Distribution, 61,824 tonnes of foodgrains were damaged in the godowns of the Food Corporation of India between 2011-12 and 2016-17. Credit: Ajay Verma/Reuters

“After a prolonged decline, world hunger appears to be on the rise again”, claims  a report titled ‘The State of Food Security and Nutrition in the World (2017)’ by the Food and Agriculture Organisation of the UN. Nowhere is this more true than in India, which is home to 190.7 million undernourished people, the most in any country. While this may seem like a fantastic claim in the context of the fastest growing economy in the world, here are some statistics from the report:

–14.5% of the Indian population is under-nourished

–47.5 million Indian children under five years of age are stunted – again, the most in any country in the world

–64.9% of Indian women (the highest proportion in the world) rely exclusively on breastfeeding for feeding infants between 0-5 months of age

These numbers certainly tell a story – but numbers are, by definition, abstract concepts. Putting a face to this story may help – or faces, in this case. A few days ago, three sisters (Mansi (8), Shikha (4), Parul (2)) in Delhi’s Mandawali area died of starvation. Amita Saxena, the medical superintendent of Lal Bahadur Shastri Hospital, told NDTV that “….there was not a speck found in the stomach, bladder and rectum of the children……it looked like they had not eaten since eight-nine days”.

Apart from hunger, there is another common thread that runs through all these deaths – the claims of authorities that the deaths were caused due to “illness”. In Santoshi’s case, the mother, Koili Devi, was threatened that her deceased daughter’s body would be dug up and cut open for post mortem, if she continued to insist that her daughter died of starvation. Scroll reported that Koili Devi displayed unusual resilience when she rationalised, “Now that my daughter is dead, how does it matter what anyone does with her body?”

Why is this happening in a country which supposedly produces more food than it needs? According to the World Economic Forum, India needs approximately 230 million tonnes of food per year to feed its population – and India’s foodgrain output in 2016-2017 was a record 273.3 million tonnes.

Rats may be one answer. Sharad Pawar, former union agriculture minister, once told Parliament that nearly 40% of the value of annual production of food in India is wasted, with crops left to rot in the sun without storage or transportation, or eaten by insects and rats.

According to an RTI reply given by the Ministry of Consumer Affairs, Food & Public Distribution, 61,824 tonnes of foodgrains were damaged in the godowns of the Food Corporation of India between 2011-12 and 2016-17, enough to feed an estimated eight lakh people for an entire year.

The Indian government is reportedly trying to resolve these issues through newer distribution strategies, use of technology, improvement of cold chain facilities and tie-ups with private players.

However, these measures, even if implemented, would still not be sufficient to put food in the mouths of Santoshi, Parul, Shikha and Mansi, for the issue runs deeper than a lack of infrastructural facilities.

In India, infrastructural constraints aside, there does exist a basic framework to ensure that poor families are provided with a minimum quantity of food. Under the National Food Security Act, 2013, poor families are guaranteed five kg of foodgrains per person per month, at heavily subsidised rates of Rs 1-3 per kg. The Act reportedly covers 75% and 50% of India’s rural and urban populations respectively, and yet, the Santoshis and Paruls of India continue to fall through the cracks.

The reason is simple – to avail the benefits of the National Food Security Act, families are required to hold ration cards, and now, the Aadhaar has further exacerbated the issue. Authorities at the ground level insist that these ration cards must be linked to Aadhaar, despite the fact that the constitutional validity of Aadhaar is hanging in balance – the verdict in the matter has been reserved by the Supreme Court.

The fundamental question here is that should access to something as basic as food be governed by the availability of documentation such as an Aadhar card? Right to Food is a basic human right, and in India, is enshrined as a fundamental right under Article 21 of the Constitution, which guarantees right to life and liberty. The right to life as referred to under Article 21 has been interpreted to mean a right to live with dignity and not mere animal existence and that implies ensuring access to food and not just availability of food..

Fundamentally, the roots of the problem of hunger and malnutrition are not lack of food but lack of access to available food, inter alia because of poverty, by large segments of the world’s population…

Further, with regard to the State’s obligation to ensure access to adequate food, the report went on to note that:

In terms of the above, it is incumbent on States to not only ensure availability of and access to adequate food, but also to ensure that no measures are taken such that there is a hindrance in accessing food. Most importantly, whenever people are unable to enjoy access to food directly, it is the responsibility of the State to fulfil that obligation directly.

Closer home, specifically in the context of the National Food Security Act, in the matter of Swaraj Abhiyan vs Union of India (2016), the Supreme Court noted that:

……there can be no doubt that the right to food is actually a constitutional right and not merely a statutory right….In any event, even if the right to food is a statutory right, it would be the obligation of the State to make all possible efforts and some more to ensure that to the extent possible, adequate food grains are available to all and particularly to those in drought affected areas.

Further, the court also stated that “It is high time that the machinery under the NFS Act is put in place by all concerned otherwise the enactment of social justice legislations will have no meaning at all…..”

Given the above, the need of the hour is to ensure that the machinery put in place to enforce a substantive right does not end up becoming the biggest barrier to the realisation of that right. It is set law that procedures cannot impact vested substantive rights – and the right to life and correspondingly, food, is the most substantive of all rights.

As French philosopher Simone Weil once said, “It is an eternal obligation toward the human being not to let him suffer from hunger when one has a chance of coming to his assistance.” It is high time that the fastest growing economy in the world woke up to that obligation.