IAS Officer Being 'Taught a Lesson' for Taking on Modi, Says Family

Pradeep Sharma, at the centre of the 'Snoopgate' row, failed to make bail for his son's wedding after his arrest in a case of alleged graft – filed after a ten-year delay. 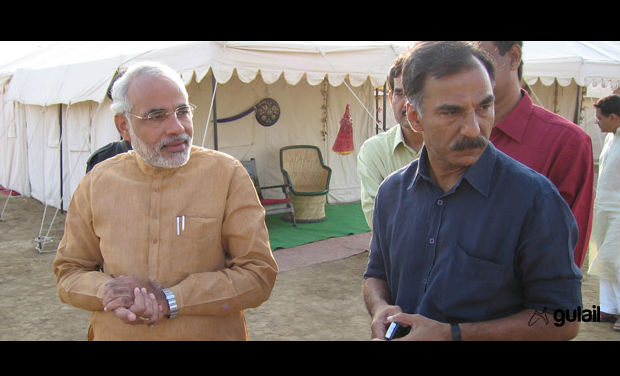 Ahmedabad: IAS officer Pradeep Sharma spent another day in Sabarmati central jail in Ahmedabad on Friday even as his son is getting married in the United States since a special anti-corruption court in Bhavnagar on March 27 denied him bail – both regular as well as temporary for a week – to view his son’s wedding from India via a video link, and the high court too refused an urgent hearing in the matter.

With the ceremonies related to the wedding due to get over on Friday, Sharma’s family said it was clear that he was booked in a new case earlier this month only so that he remains behind bars and is “taught a lesson” for having acted against Narendra Modi.

Though his lawyer had pleaded that temporary bail was needed by Sharma to view his son Prashant’s marriage on a video link along with other family members who were not able to attend the wedding in the US, the request was turned down.

Asserting that the family would deal with the events, a close relative of Sharma said, “No one is submitting to this.” He insisted that the family was clear in its mind that Pradeep Sharma – who has seen 10 FIRs being filed against him over the last eight years – has suffered all these years “because of that girl”  who is at the centre of what has come to be known as the Snoopgate scandal.

What Snoopgate was all about

Audio tapes uploaded by Cobrapost.com and Gulail.com in November 2013 had revealed how a snooping operation was conducted from August to September 2009, in which a close watch was kept on the movements of a 35-year-old female architect working from Ahmedabad and Bhuj at the behest of a mysterious person who was only referred to as “Saheb”. The uploaded tapes contained conversations between senior police officer G.L. Singhal and Amit Shah, now BJP president, who was the Gujarat minister of state for home at the time.

The ‘saheb’ was later identified as Modi, who was Gujarat chief minister at the time. The two websites alleged that the Gujarat state machinery was used to monitor the architect’s calls, tail her daily movements, including trips outside Gujarat, record who she met and spoke to, and what the conversations were all about. The tapes got leaked when Singhal submitted the audio clips to the Central Bureau of Investigation after he was arrested in the Ishrat Jahan fake encounter case.

The tapes, it was said, were used as a bargaining chip by Singhal to turn approver in the case in return for bail. He was ultimately rehabilitated by the Gujarat government.

In the case of Sharma, it had emerged that he was the architect’s confidante in the tapes and paid a heavy price for the friendship. As The Wire reported:

“In 2010, he was arrested and jailed for over a year, for five corruption cases in land deals during his time as Kutch collector between 2003 and 2007. In his petition, Sharma listed out reasons for being victimised by the Gujarat government: his brother IPS officer Kuldeep Sharma had taken on Shah in the 1200 crore rupees Madhavpura bank case, and he knew of Modi’s relationship with the architect. He also placed on record three sets of statements by Singhal, damning details of the Ishrat Jahan fake encounter, that allegedly point a finger at Modi. But the UPA government at the Centre, a known political adversary and so-called champion of the secular polity, chose to look the other way.”

The Gujarat government admitted the young woman had been snooped upon but claimed the police had done so after her father had requested Modi to “protect” her.

Family disappointed with other serving officers

According to the close relative of Sharma, “the family is determined to see this through regardless of what they can do. It knows this is the worst form of misuse of power.”

“But,” he said, “the major disappointment is with the civil servants who are conniving in this with the powers that be.”

“The family is deeply disappointed with the conduct of these civil servants. Pradeep Sharma had 17 IAS officers as his house guests. That was the kind of rapport, regard and affection he commanded. But when they saw the way Modi had reacted they all disappeared,” said the relative, adding that these officers included an officer (Arvind Sharma), who is now posted in the Prime Minister’s Office. “His son and daughter used to spend time with Pradeep Sharma’s family at their home during their holidays.”

Ordered to be released on March 8, arrested again on March 9

On March 8, Sharma was granted bail by the high court in a money laundering case registered by the Enforcement Directorate. But before he could be released, the ACB filed an FIR at 6-15 a.m. on March 9 and arrested him. The new FIR was based on a statement of a managing director of a private shipping money, Sahay Raj, who had alleged that he had paid a Rs 25 lakh bribe to Sharma for releasing funds in 2008 when the latter was managing director of Alcock Ashdown (Gujarat) Limited.

In his defence, Sharma had alleged that the FIR, filed after a gap of 10 years, was filed with “malafide intention” and “belatedly” only to ensure that he remained behind bars.

`Why the hurry to file FIR at 6 in the morning?’

“This was not a case of rioting or murder. Where was the urgency to file an FIR at 6 in the morning that too, 10 years after the supposed crime? The case could have been registered one year earlier. They could have arrested him while he was already in judicial custody. They could have taken him in remand. But they are obliging Modi and Amit Shah by keeping him behind bars in this manner and the judiciary is blind that they are not able to see this,” charged a relative.

“In the entire country, you will find no example of an anti corruption bureau filing an FIR at 6 in the morning. This is because these are not urgent or critical matters. They knew he had been languishing in jail for 18 months and was coming out. So they could have served him summons and allowed him to avail of legal remedies like anticipatory bail. But they are following Amit Shah’s and Modi’s orders,” he added.

Urgency in filing cases is subjective

The relative said the urgency shown by the police agencies in the state in probing various cases depends on what Modi and Shah want.

“Sometime back a municipal commissioner of Rajkot was locked up and assaulted by BJP corporators. The police commissioner had subsequently gone to the wife of the municipal commissioner, who herself was in the collectorate, to state that an FIR could not be registered since there was pressure from the top. It was only after eight days, after an enquiry had also found glaring evidence of the assault, that a case was registered. So filing of cases in the state depends on the political expediency,” he noted, to illustrate the contrast between the way urgency was shown in filing the FIR against Pradeep Sharma, and how the police behaves in other matters.

No support from IAS lobby

On why the IAS officers’ associations have been silent on cases being filed against Sharma and on his incarceration, the relative said, “we realised lately that all these officers have made adjustments. They are so scared that you cannot imagine.”

The retired officers, he said, are more sympathetic and also call up to express their solidarity. “But beyond that what can they do,” he said, adding that there is a saying in Gujarati which translates to “a retired officer is worth two pennies” since they lose their worth due to loss of power.