However, the police has refuted every claim of houses being destroyed in the Mansarovar area slums ahead of the rally. 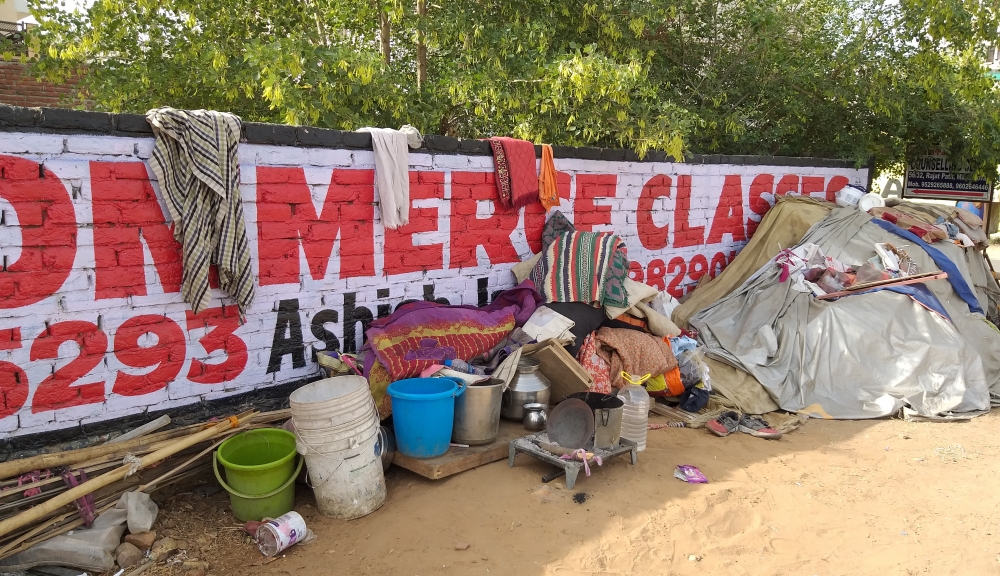 Quintessential belongings that the slum-dwellers were successful in saving from the police, kept alongside a road in Jaipur. Credit: Shruti Jain.

Jaipur: Ahead of Prime Minister Narendra Modi’s rally in Jaipur on Wednesday, at least 300 homes in a slum bordering the rally venue in Jaipur’s Mansarovar area were razed to the ground by bulldozers.

On Sunday morning, the police reached a slum situated at an open ground near VT road that was finalised for the rally and gave only a few minutes to the slum-dwellers to vacate the area. Only a few of them were lucky enough to take their essential belongings with them before their houses were destroyed. Ever since Sunday, they have been struggling to find a safe place to keep their belongings.

“The authorities destroyed our homes for a function and it doesn’t pain even them in the slightest. Do they realise how much it takes to build a home again? Even the tirpaal (canvas) that we use to make a small hut costs around Rs 500, and that’s not at all easy for us to gather,” Lalitha, a resident of the slum area told The Wire.

Portion of the rally venue that was cleared of the slum houses. Credit: Shruti Jain.

Their primary focus is to at least save their household items from the police even if means to stack them in vacant plots full of garbage. “Sure, we live on roads but that doesn’t mean we can live in garbage too. There is so much filth here that we can’t even cook. Our utensils have begun to stink now,” said Lakshmi, another resident.

Dependent on daily wages for their expenses, these slum-dwellers have not been able to go out for work for fear that their luggage – which is currently kept on roads – might be tossed away by the police anytime. Coupled with the lack of income, these families are ultimately unable to cook food for themselves.

“I work as a domestic help in a nearby house, but I’m on leave since Sunday because we can’t go to work leaving our luggage on the roads. The police have already threatened us not to be seen anywhere around the venue of the rally and if they’ll find us, our luggage would be destroyed in the same way they destroyed our homes,” said Pooja, resident of the slum alongside the VT road area.

“It’s been four days since anyone of us has cooked food. There is no money to get food and, for poor people like us, it’s easy to get a sound sleep with a hungry stomach,” she added. 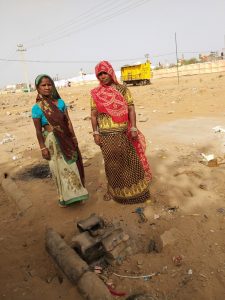 Madhu (L) and Lalitha (R) showing the spot at the rally venue which used to be their house four days ago. Credit: Shruti Jain.

There are several kids among the displaced who are compelled to stay on the road in the scorching summer heat. At a time when mercury levels have risen to 45 degrees in the capital, these slum-dwellers have been deprived of even the slightest conveniences, like that of even a tattered roof over their heads.

To make matters worse for them, their presence on the roads within residential colonies is attracting complaints from residents who fear their settlement in their locality.

“Our mothers look after the luggage and send us to a nearby park as it has some trees, but the locality is raising questions about our luggage being kept outside their homes. Anyone of them can complain to the police about our location so we keep wandering,” said Govind, a class III student from the slum area.

A night ahead of the rally, a few slum-dwellers who were sleeping on the ground that once used to be their home, were beaten up by the police. Several of them were injured. “We have been sleeping on that spot for more than two decades now. It has less of mosquitoes because the wind blows at a fairly good speed here. So, we went just to sleep there but the police had issues with that also,” said Kalu, one of the slum-dweller who was beaten up by the police for sleeping at the venue.

They say the reason behind demolishing slums ahead of such events for ‘security reasons’ is that, in case of any planned terrorist activity, it becomes easier for fringe elements to mix with the slum-dwellers.

“The authorities believe that we perpetuate terrorism. Just because we are not educated and don’t have good jobs, doesn’t mean that we can be traitors to our own country. We are not even allowed to enter the rallies that are arranged at the place that is our home,” said Raju.

The slum-dwellers collectively criticised political parties of using their name to garner votes while treating them inhumanly in reality. “Modi says he comes from a poor family, but still he isn’t at all concerned about the poor people like us whose homes have been demolished for his rally,” added Kalu.

However, the police has refuted every claim of houses being destroyed in the Mansarovar area slums ahead of the rally.

Speaking to The Wire, superintendent of police, Jaipur (south) Yogesh Dadhich said, “We haven’t broke a single house in the city. Our team might have checked a few people, but it isn’t possible that any house was broken.”

The mood at Modi’s rally in Jaipur on Wednesday was dull. The crowd gathered at the rally mostly comprised of BJP workers. Even the traffic in the city was normal despite a rally being scheduled during peak office hours in the evening.