The Human Rights Watch report notes that the police have repeatedly failed to intervene when government supporters attacked those protesting new citizenship policies. 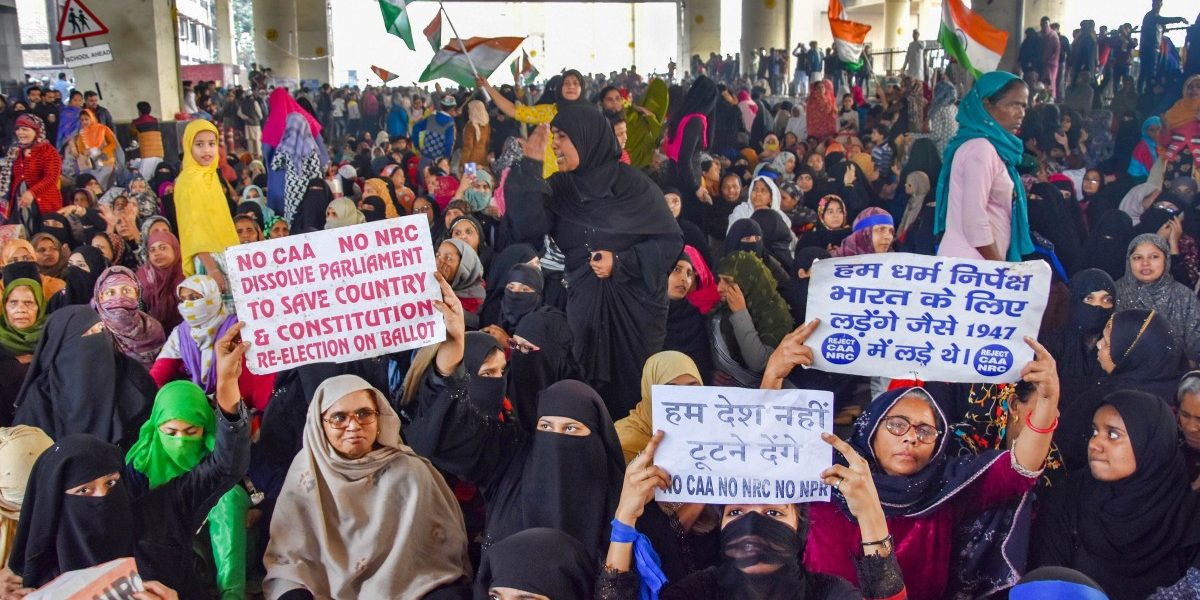 Protest against the CAA, NRC and NPR at Delhi's Jaffrabad. Photo: PTI/Files

New Delhi: International human rights group Human Rights Watch (HRW), in its latest report, has recommended that the Indian parliament repeal the contentious Citizenship (Amendment) Act, 2019 (CAA). As per the report, the CAA is discriminatory and in violation of international human rights law because it applies only to non-Muslims from Bangladesh, Pakistan, and Afghanistan.

“The government has tried to justify the law, saying it seeks to provide sanctuary to religious minorities abroad, fleeing persecution. However, that claim is belied by the exclusion of many other vulnerable groups who have sought refuge in India, such as minority Tamils from Sri Lanka and ethnic Nepalis from Bhutan. It also effectively excludes other persecuted Muslim minorities like the Hazaras from Afghanistan, the Shia and Ahmadiyya from Pakistan, and the Rohingya from Myanmar,” read the report released on Friday.

Titled ‘Shoot the Traitors’: Discrimination Against Muslims Under India’s New Citizenship Policy, the 82-page report further claims that the police and other officials have repeatedly failed to intervene when government supporters attacked those protesting new citizenship policies.

“The police, however, have been quick to arrest critics of the policy and disperse their peaceful demonstrations, including by using excessive and lethal force,” notes the report.

Commenting on the violence against Muslims in India, Meenakshi Ganguly, South Asia director of HRW said, “India’s prime minister has appealed for a united fight against COVID-19, but has yet to call for unity in the fight against anti-Muslim violence and discrimination.”

According to Ganguly, “Government policies have opened the door for mob violence and police inaction that have instilled fear among Muslims and other minority communities throughout the country.”

The report is based on more than 100 interviews and testimonies of victims of abuse and their families from Delhi and the states of Assam and Uttar Pradesh, as well as with the opinion of legal experts, academics, activists, and police officials.

Noting that the process of the National Register of Citizens (NRC) has already left nearly two million people at risk of arbitrary detention and statelessness in Assam, the report states, the HRW “found that the Foreigners Tribunals, which decide the question of citizenship, lack transparency and fail to follow uniform procedures, often making their decisions inconsistent.”

Listing out the recommendations HRW’s report says, the citizenship law and verification process are contrary to the basic principles of secularism and equality enshrined in the Indian constitution and in domestic law. “Indian authorities should immediately reverse course and adopt rights-respecting laws and policies regarding citizenship. They should also uphold the rights to freedom of expression and to peaceful assembly,” it added.

Speaking to The Wire, author of the report Jayshree Bajoria said, in addition to Muslims, “The NRC will impose terrible hardships on the poor, on the marginalised communities and on women, especially from these communities.”

Citing Assam’s example, she further said, “While NRC will affect the poor and the marginalised too, the Bhartiya Janata Party (BJP) government sees the CAA as the solution to the Hindus and other non-Muslims left out of the NRC in Assam and when such a process happens in the rest of the country.”

She cited Union home minister Amit Shah’s famous statement, in which he assured non-Muslims repeatedly saying “understand the chronology” that his government would bring CAA before they bring the NRC.

Commenting on the latest communal violence in north east Delhi, Bajoria said, “The police have failed to file cases against BJP leaders and supporters who openly advocated violence against the citizenship law protesters.” According to her, this has happened despite the fact that “there are witness statements and video evidence showing police bias and even complicity in some cases when a Hindu mobs attacked Muslims in February.”

About targeted violence on anti-CAA and NRC protesters in Uttar Pradesh the report notes, in UP, right when the demonstrations were beginning, the chief minister [Adityanath] vowed to “take revenge” against protesters. He has repeatedly made anti-Muslim remarks in public, even after taking office. The police have also been accused of extrajudicial killings, of communal bias especially in recent years.

According to her during the anti-CAA protests, these actions may come from their own bias as well as what they perceive to be the message from the political leadership.

“Look at the Allahabad high court judgment for instance which called the action of authorities “illegal” of putting billboards across UP with photos, names and addresses of peaceful activists and protesters. Such actions clearly don’t have backing of law,” added author of the report.

It can be recalled that in February, UN High Commissioner for Human Rights Michelle Bachelet during her update to the 43rd session of the UN human rights council had said, “Citizenship Amendment Act adopted last December is of great concern. Indians in huge numbers, and from all communities, have expressed – in a mostly peaceful manner – their opposition to the Act, and support for the country’s long tradition of secularism.”

Later she also filed an intervention application in the Supreme Court against the CAA. Earlier in December 2019, OHCHR had described the citizenship amendment act as “fundamentally discriminatory”.