How Syed Ali Shah Geelani's Body Was Taken From His Family, Buried in Haste

Geelani's family says that after first agreeing to allow family members to arrange the burial, the police decided to take away the Hurriyat patriarch's body. 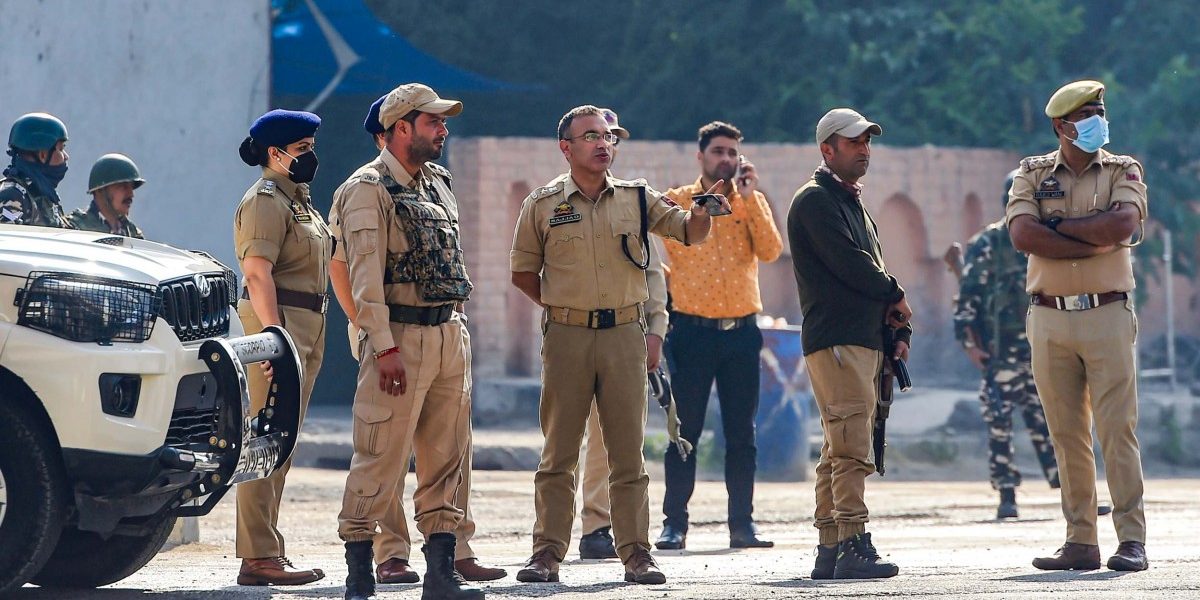 Police personnel keep an eye on the situation during restrictions at Hyderpora, in Srinagar, Thursday, Sept. 2, 2021. Restrictions were imposed across the valley as a precautionary measure following the death of pro-Pakistan separatist leader Syed Ali shah Geelani. Photo: PTI/S. Irfan

Srinagar: By 10:30 pm on Wednesday evening, news had leaked from the heavily guarded residence of Syed Ali Shah Geelani, located on the outskirts of Srinagar, that the Hurriyat patriarch had passed away.

Geelani’s immediate family members had made phone calls to their relatives, and the subsequent chatter quickly found its way on to social media.

As the news began travelling like wildfire across Kashmir and beyond, a team of J&K police officials, some uniformed, some in civvies, but most of them masked, arrived at Geelani’s residence. They asked the family to prepare for his burial.

“We had hammered out several plans to contain law and order problems. We were ready for it and it was our good luck that he (Geelani) passed away at night. Had he died in daytime, the situation could have been different,” a police source said.

The J&K administration rushed Dr A.G. Ahanger, director of the Sher-e-Kashmir Institute of Medical Science, to Geelani’s house. Some time later, inspector general of police (Kashmir) Vijay Kumar reached there too, along with an SSP.

Also read: Even When He Was Severely Ill, New Delhi Didn’t Stop Viewing Syed Ali Shah Geelani as a Threat

A communication blackout was being imposed in Kashmir. Outside Geelani’s residence and across the Valley, thousands of police and paramilitary personnel were taking control of the roads to prevent people from reaching his residence.

The Hurriyat patriarch had wanted to be buried at the Martyrs’ Graveyard in Srinagar; for the police, however, the prospect of a procession marching with his body from Hyderpora to downtown Srinagar was a security nightmare. 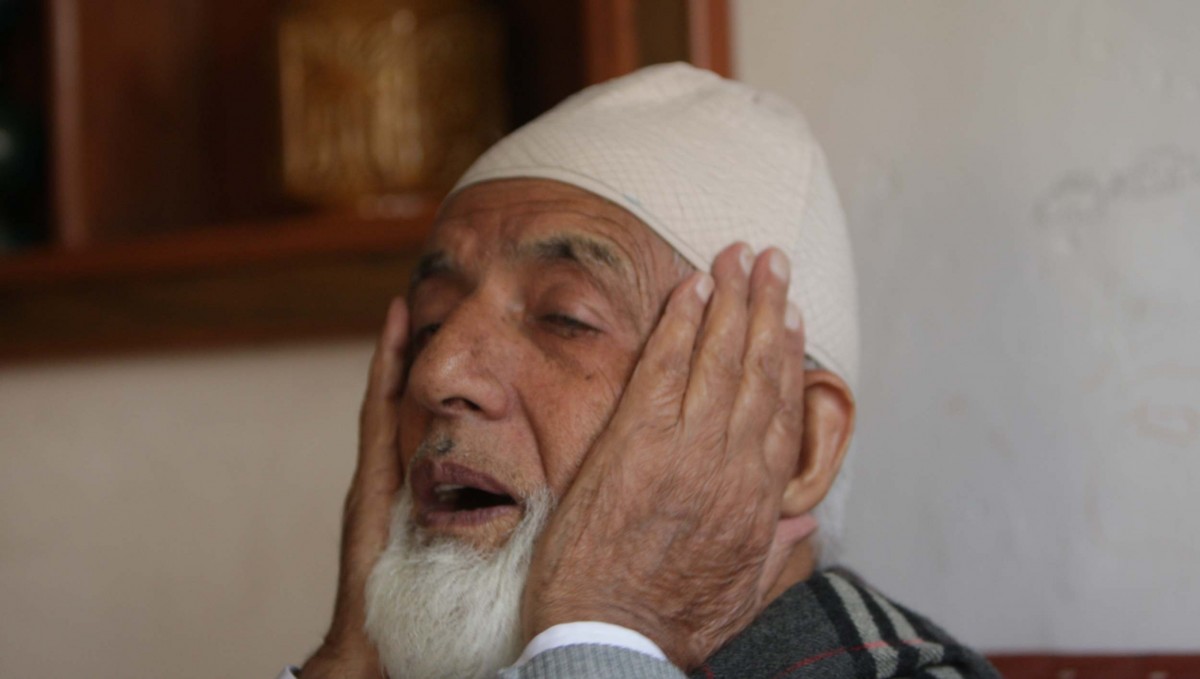 IG Kumar spoke with Naeem Geelani, the Hurriyat leader’s elder son, who was at the house along with his wife. It was well past midnight and Kumar allegedly demanded that Geelani be buried before dawn “for security reasons”.

“I objected because he (Geelani) had not committed any wrong,” said Naeem, who is a doctor by profession. “I told him (Kumar) that we will wait for daylight. We were hoping that our relatives could get a last glimpse of him before the burial.”

As IG Kumar left the house in a state of disappointment, paramilitary troopers moved into the courtyard. Geelani’s body was surrounded by both his sons – Naeem and Naseem Geelani – three of his daughters, daughters-in-law and grandchildren.

The police then made their move. A team forcibly entered the house and made their way into the room, where a green cloth emblazoned with a white crescent and star, resembling Pakistan’s national flag, was draped on Geelani’s cold body.

Now, the J&K police have also filed an FIR against Geelani’s family for using this flag. The FIR also says that “anti-national” slogans were raised after the Hurriyat chief’s death by unknown persons present at his house. It is not clear what the slogans were or whether the FIR lists them out.

According to the Geelani family, the police had initially agreed to allow them and their neighbours to perform the last rites. “Instead, they raided the residence, trampled on everything, thrashed family members and took away the body. They were not even carrying a stretcher and the body had to be dragged on the floor,” a family member said.

“We tried to stop them from entering the room (where Geelani’s body was kept) but they broke open the door,” Naeem, who was by his father’s side when he passed away, said.

A grainy video shot in the room shows Naeem urging nearly a dozen police officials, some of them armed with automatic weapons, to let the family spend some time with Geelani.

“Since he passed away, you have been coercing us. We can’t participate in what you tell us to do. Whatever you want to do, go ahead, because you have power, you have the authority, you have everything. We have nothing,” Naeem tells the police officials surrounding him.

“We just wanted to spend some time with him. You don’t have (official) orders (to take away his body). Go ahead and do what you want to do,” Naeem continues, as the police officials listen in rapt attention.

Naeem said some police officials kept switching on and off the light inside the room and chaos broke out, during which Geelani’s body was snatched and pulled out into the courtyard.

Another video shows Naeem and other relatives staring at each other in anguish while police officials forcibly shut the door of the room from outside. A relative of Geelani’s, who spoke with The Wire on the condition of anonymity, said the police had by then taken the body when this video was shot.

“They had been preparing for this day for many years. There was an ambulance outside the house. They had arranged everything; from a burial shroud to gravedigger, we had no role in his (Geelani’s) burial,” Naeem said.

Also read: ‘It Is Humiliation for Us’: Internet Shutdown Blocks News In Kashmir

According to family sources, Abdul Rashid Shah – a nephew of Geelani – and his son, who live in south Kashmir’s Dooru area, were the only relatives who were able to attend his funeral.

Shah had been informed by Geelani’s family about his passing and had managed to make his way to Hyderpora. “But he was not allowed inside [the compound by the police]. When he heard cries and saw an ambulance coming out, he followed it and saw it stopping at the graveyard. He was the one who helped put him (Geelani) in the grave,” a family source said.

“They could have handled it in a better way while observing security protocols. It is a big reflection on the security leadership. It will leave one more scar that will remain etched in the memory of Kashmiris. It will go down in history as one more act of tyranny,” the relative quoted above said.

The J&K police, on their part, deny claims that any kind of compulsion was involved in Geelani’s burial.  In a statement, a police spokesperson said they facilitated the journey of Geelani’s body from his home to the graveyard, which is barely few hundred metres away. “Some vested interests tried to spread baseless rumours about forcible burial of SAS Geelani by police. Such baseless reports which are as a part of false propaganda to incite violence are totally refuted by the Police. As a matter of fact, Police instead facilitated in bringing the dead-body from house to graveyard as there were apprehensions of miscreants taking undue advantage of the situation. The relatives of the deceased participated in the burial,” the police said.

The Wire requested IG Kumar to share the names of Geelani’s family members who had participated in his funeral. He responded: “We are busy in maintaining law and order situations till completion of his fourth day (on Sunday). We will share all details, pictures and videos to (sic) media after that.”