Untouched by even basic human development interventions, the reach of social media in spreading information across every household and making matters heard has been transformative in Bilari. 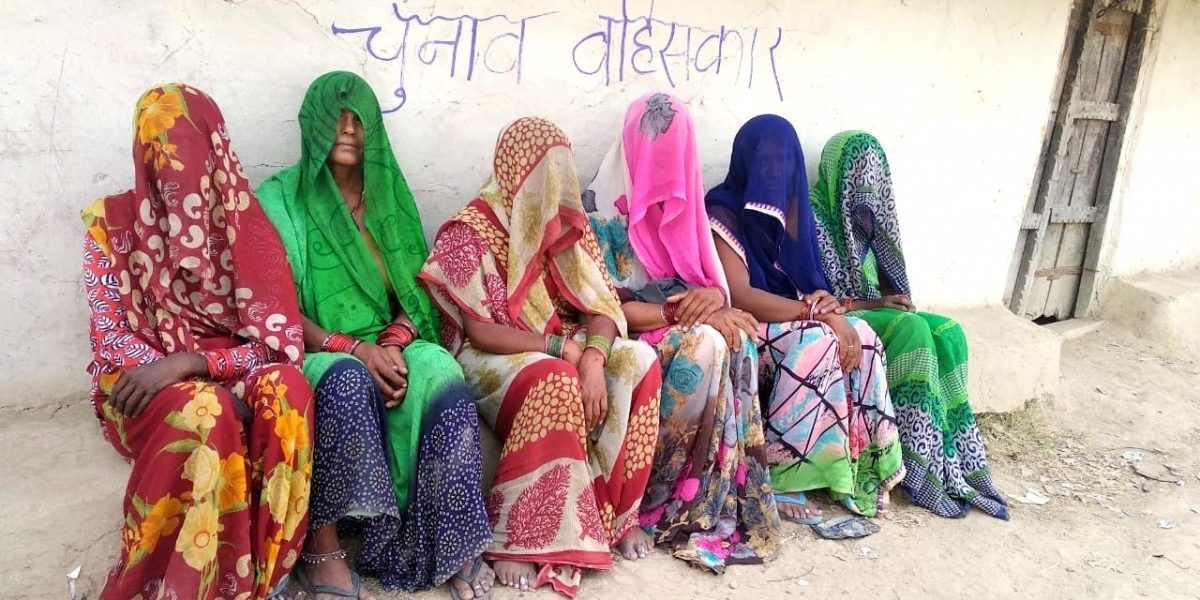 Bilari (Chitrakoot, UP): “Since independence, many netas have come and gone with promises left unfulfilled. Promises to attend to even our basic needs like roads, electricity, water, health facilities. After the voting season, they are never to be seen.” This is how we met Dharmendra, who was spearheading an agitation to boycott Lok Sabha elections in Bilari village, Rampur Gram Panchayat, Chitrakoot, UP.

When Khabar Lahariya’s Digital Head Kavita travelled to meet the villagers last month, the call for rejecting another apathetic MP was unanimous. The words ‘Chunav Bahishkaar’, or ‘Vote Ban’ had been painted on the walls of almost all the kuccha houses in this village of around 950 people.

Led by Dharmendra Bhaskar and Ramkesh Yadav, members of a politically active group called the Aabhas Mahasangh, what the residents of this remote village had perhaps not anticipated was the drama that would follow their call for boycott.

What prompted them to take a stand and make themselves heard after such a long period of indifference from their elected representatives?

According to Ramesh, another local, “Our major demands have always been for the construction of a road and compensation for our lands that get flooded during the monsoons every year. We have sat on many protests and hunger strikes since 2014 for the same demands. Several officials like the A.D.M Indraprakash and the D.O. had given us assurances, but to absolutely no avail.”

The road that exists right upto the nearby dam becomes non-existent until one begins to come down from it to the village. Needless to say, this has led to huge inconveniences, especially during emergencies like when women go into labour and others need emergency medical care. Many have died enroute, we learnt.

Apart from the mood of betrayal that lingers in Bilari, a sense of despondency was palpable too, reflected in the words of Shakuntala Devi: “Our lives will end here, drowned in the same problems. But I worry about my children – their future, their education, job prospects. At the local school, only two or three teachers come occasionally, putting in minimal effort, serving substandard khichdi for meals and then they leave the children on their own. These and other basic things like an aganwadi, a nurse, a health centre are needs that can surely be easily met.” But Bilari, she insisted, has been bereft of them.

When we spoke to Priyanka, a young college student, about the state of education facilities, she said: “When it floods, we cannot go to college for months on end. Why can’t there be a college nearby?” She was adamant about the call for a vote boycott, “If no one does anything for us, why should I vote?” This would have otherwise been her first vote.

Also read: In UP’s Chitrakoot, a Young Woman Will Contest Against Patriarchy and Casteism

Floods lead to other problems as well. Sushma Devi summed it up: “Our stoves won’t work; the water reaches knee-high levels, and insects and snake bites are rampant.”

We reached out to a few officials available for comment, including Pankaj Tiwari, son of the village Pradhan and hence his spokesman. He had an ambiguous response, “The sand acquisition process for the construction of the road has been done. A budget of Rs 8 lakh had been sanctioned and we have spent around Rs 3,90,000. After that, the officials closed the account. We are waiting to receive measurement details from the NREGA department as of now.”

Besides the road, when asked about the absence of built toilets and pucca houses, despite household level schemes for the same, the Black Development Officer (B.D.O.) Asharam Sinha had this to say: “One bathroom has already been built this year. The rest are in line for construction.  As for the road, a two-kilometre road cannot be built at the Gram Panchayat level. The elected MLA or MP should get it done.” Tiwari, on the other hand, said, “Most households here have already been allocated funds by cheque for toilet construction but just have not built it yet.”

Despite everything, the strong belief in the influence of a local news channel to make their voices heard yielded results. Once our video report was published, it became a local phenomenon. Widely viewed, shared and commented on, the video became a hot button topic for discussion through several local WhatsApp groups, Facebook and YouTube.

Practically untouched by even the most basic human development interventions through the years, the reach of social media in spreading information across every household and making matters heard, has been transformative for Bilari. The YouTube video, which went live on April 26, garnered more than 75,000 views and generated a range of responses. While local viewers openly supported the boycott, the local officials took notice and made last-ditch efforts to suppress the stir.

Dharmendra, along with Ramkesh, was arrested on the night of April 30, only to be released the next day, on further protests. When voting day finally arrived on May 6, Bilari villagers refused to vote at the first ever exclusive polling booth set up for the village. They stood their ground until around 1 pm, which was when the Rampur pradhan arrived on the scene, in tow with the tehsildar to “settle” the matter. The process involved further coercion, a fair amount of intimidation and reassurances for swift action on meeting their needs.

Finally, Bilari gave in and voted, adding to the phase five polling statistic of UP that sit at 57.9%.

Was this just another one of the many defeats and betrayals Bilari will be subjected to?

For now, the question looms thick in the air and is summarised best by Shakuntala Devi: “When this government is apparently providing every imaginable facility everywhere else, why hasn’t it reached this village?”

That’s what Bilari wants to know.