How Khori Gaon Residents, Now Facing Eviction, Were Forgotten During the Pandemic

Having been at the margin of urban development, these residents have lived with multiple vulnerabilities for years. Then came the pandemic. 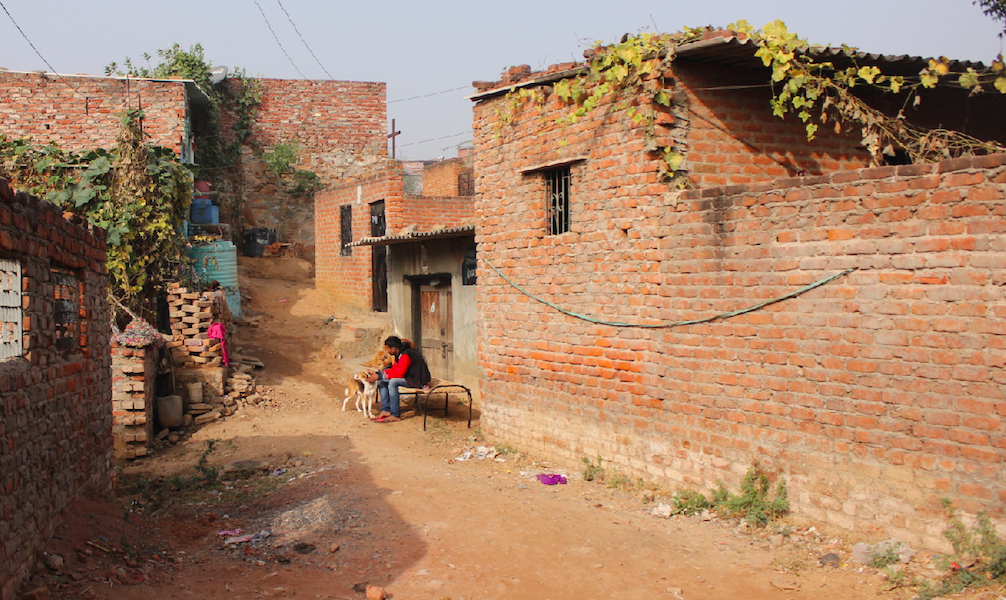 The Supreme Court’s orders of 2020 and 2021 for the eviction of Khori Gaon residents without rehabilitation has naturally heavily affected those living there.

Having been at the margin of urban development, basti residents have lived with multiple vulnerabilities for years. In addition, they also endured the disproportionate impacts of the pandemic. Moreover, in Khori Gaon’s case, border politics has further exacerbated their situation.

Khori Gaon is situated at the periphery of Delhi and Faridabad. The location is also the foothills of the Aravallis.

Being a post-quarry landscape, the land on which the basti stands displays irregular slopes, inaccessible pockets, vertical rockfaces, and deep pits. As a result, access has always been an issue.

To its east are the commercial and hospitality developments that came up on the flattest land in this area, and to its north is the unauthorised colony Chungi 1,2 and 3 in Lal Kuan, whose ground surface is relatively more accessible than Khori Gaon.

The location of the basti on the most precarious terrain is a common trend observed all over the globe. Informal settlements often emerge on land uninhabitable during the earlier stages of development, but they slowly transform into a vibrant urban neighbourhood through the incremental construction undertaken by residents.

The settlement’s demography comprises migrants from Delhi and nearby states who have moved here. The early residents were quarry workers who could not go back to their villages due to debt bondage. They settled down here between 1970 to 1990.

From 2004 onward, there has been a steady flow of urban poor who had been displaced from the different bastis in Delhi.  Additionally, villagers from neighbouring states who sold their land and moved to the city for better prospects have settled here. Most had spent their life’s savings to buy plots here and construct their houses. 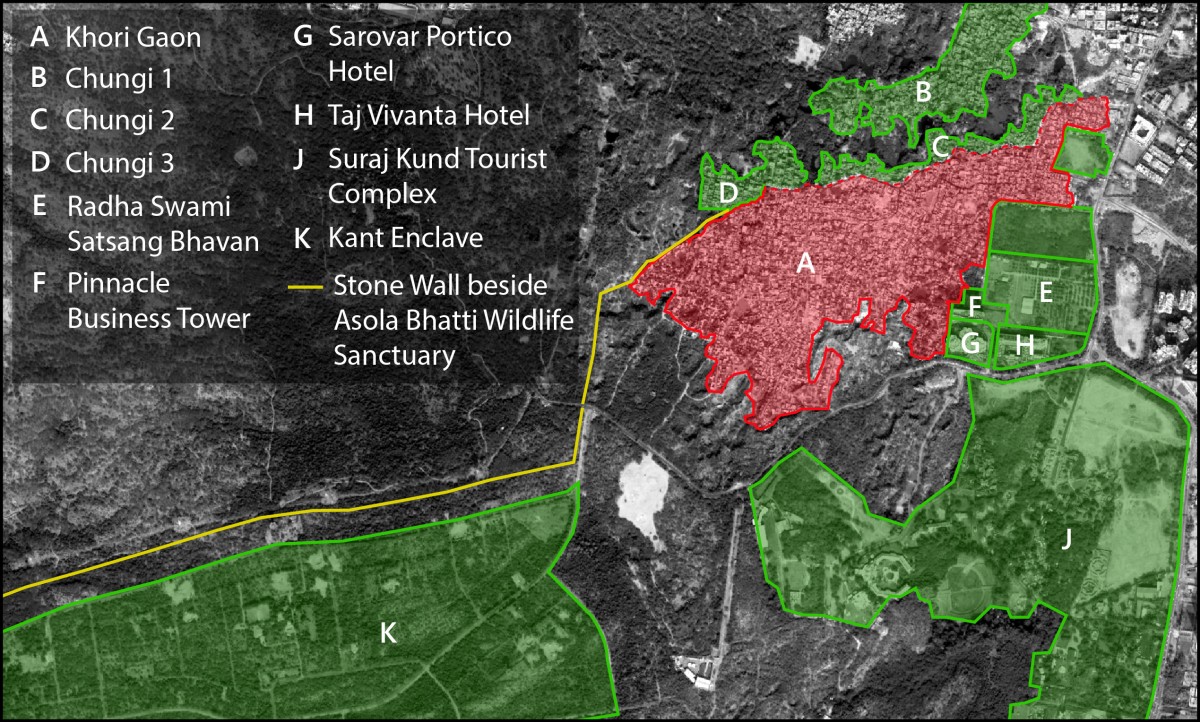 Both the edge of the forest and the two cities are unmarked.

The only territorial marker present is the stone wall built at the edge of the Asola Bhatti wildlife sanctuary to Khori Gaon’s west. Due to the absence of any border marker, the edge between Delhi and Faridabad has been an ambiguous zone. This ambiguity has been exploited by the land mafia, who sold the plots to the residents as well as the politicians.

A plot in Delhi meant a greater chance of regularisation due to the DUSIB cut off date of 2015 for rehabilitation or compensation as opposed to Haryana Urban Development Authority (HUDA)’s date of 2003. Since Chungi, situated in Delhi, had access to municipal services, a plot sold by the mafia claiming its location is in Delhi fetched a much higher amount than the rest of the area.

During each election cycle, Delhi, as well as Haryana politicians, have promised services, regularisation and have even provided official documents in return for votes. As a result, a few residents have documents of Delhi and some of Haryana. However, a large number still remain invisible in official registers.

COVID-19 and its impact

Khori Gaon residents worked in informal jobs such as driving, construction work, factory jobs, and domestic help. A lot of them were also daily wage workers.

During the pandemic, informal workers were the most affected. Their earnings either reduced or completely stopped, pushing a large number into further poverty. Many had lost their jobs due to the government’s lengthy lockdown without prior preparation and covid restrictions in workplaces. State border closures had an immediate impact as most residents worked in Delhi, Gurgaon and Noida and were unable to commute. Most of them had no savings to cushion the health and economic disruptions due to COVID. 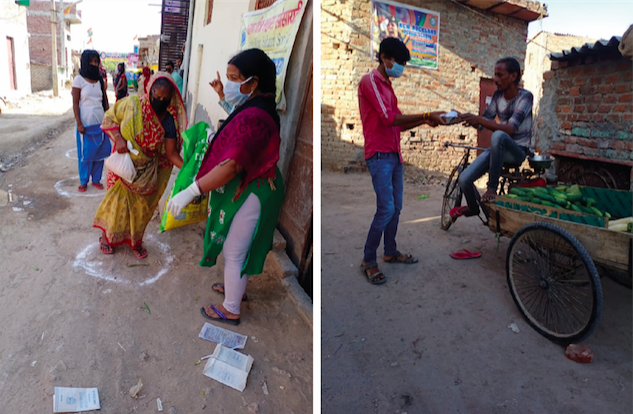 As many residents did not have identity proofs, accessing state COVID-19 relief was nearly impossible.

Those who had Delhi documents were not eligible for the aid provided by the Haryana government. While the Haryana government issued distress ration tokens for those without ration cards, this aid did not reach Khori Gaon residents. Similarly, they could not avail themselves of financial assistance announced by the state for informal workers due to language barriers in filling the forms and the inability to get them notarised during the pandemic. 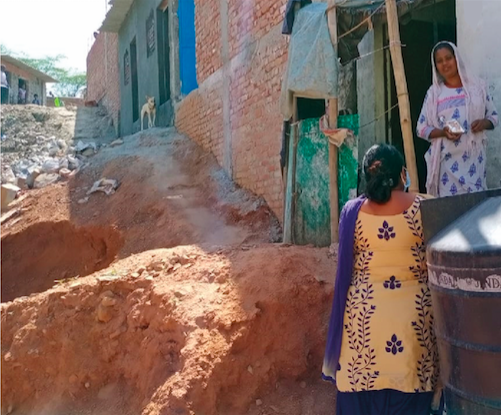 Some of the resident leaders reached out to local politicians, but the assistance received was inadequate. In some cases, they were asked to come and collect ration.

However, due to the strict restrictions in mobility during the lockdown period, the collection proved challenging. NGOs tried to fill in the gap; however, they did not have the capacity to provide for everyone.

A local gurudwara had set up a community kitchen, but due to objection from the state, it was not allowed to continue for more than a few days.

The residents of Khori were also ignored by the state government when it came to the extension of safety measures against the pandemic. There was a severe lack of awareness about the virus among the residents.

While the government made announcements through TV channels, the message was often lost due to a low percentage of literacy among the residents.

In many parts of India, including Delhi, information about maintaining proper hygiene and masks was disseminated to basti residents through loudspeakers set up in autorickshaws. However, that was not the case with Khori Gaon.

Instead, their only source of information was the unscientific and often contradictory statements being circulated through social media. Some state governments had even arranged sanitisation of internal roads of bastis to check the spread of the virus. However, Khori Gaon streets were forgotten. 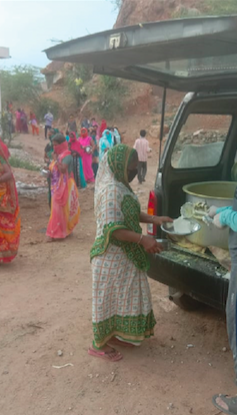 During this first wave, most COVID-19 cases in Khori Gaon went unreported and untreated. Access to hospitals was limited due to mobility problems, high expense, and lack of hospital beds. The second wave had devastating impact. As the entire nation struggled to cope with rising numbers and overburdened hospitals, Khori Gaon residents were left to fend for themselves.

They were neither able to get admission into hospitals nor access oxygen cylinders. A tiny number managed to get oxygen cylinders from private dealers; however, they were tricked into buying half-empty cylinders. The 2021 wave has led to many deaths.

As many families lost sole earning members, women struggled and still struggle to feed their children. Residents also have also found it difficult to arrange for vehicles to take dead family members for burial or cremation, often spending an entire day with the bodies.

Eviction during a pandemic

The court’s eviction and demolition orders need to be understood within this context of the socio-economic inequalities and the uneven impact of the pandemic faced by Khori Gaon’s residents.

On March 13 2020, an eviction notice was given to the residents, giving them seven days to vacate. During this time, India was witnessing a steady rise in COVID-19 numbers. The residents tried to submit their grievances to the government; however, due to the closure of government offices, they were not able to submit the documents in time.

On February 1, 2021, a letter was sent from the Khori Gaon Residents Welfare Association to the Faridabad government, appealing to the state authorities that a survey be conducted and residents be rehabilitated as per state policy. However, no dialogue was initiated with the residents; instead, on April 2, 2021, 300 houses were demolished without prior notice, the same day when 81,466 new COVID-19 cases were reported in the country.

Also read: Why the Haryana Govt Must Not Evict One Lakh Residents of Khori Gaon

The recent demolition notice was given for June 9, when nationwide COVID-19 cases were still high at 92,596.

As residents and activists protested on the streets, Section 144 was issued by the state to thwart grassroots mobilisation. A few of the resident leaders and an activist was also arrested. In the following days, Khori Gaon’s access to water and electricity has been cut off. Barriers have been installed at the edges of the basti to restrict movement. Additionally, phone network towers within the basti have also been demolished to disrupt communication between the residents and the outside world. 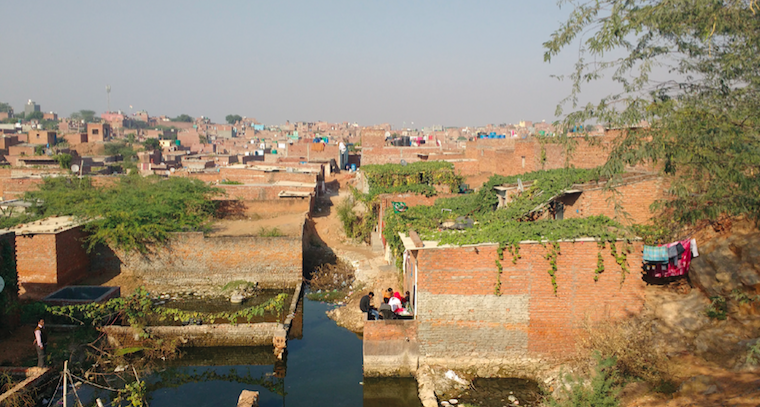 These steps taken by the state is in direct violation of the COVID-19 Guidance Note announced by the United Nations Human Rights Special Rapporteur, Leilani Farha, in April 2020.

It states that “[h]ousing has become the frontline defence against the coronavirus. Home has rarely been more of a life or death situation…States must take the following urgent measures, in keeping with their human rights obligations: Declare an end to all forced evictions of informal settlements and encampments…Ensure all residents of informal settlements/encampments have access to an adequate, affordable and proximate supply of water, toilets, showers, sanitation services, soap, hand sanitiser, disinfectants, and masks. In communities with limited access to local water supply, water tankers and equipment to create boreholes must be urgently provided…”

Here, Khori Gaon residents have no access to water even to wash their hands during the middle of a pandemic. Instead of providing relief to the impoverished, the state is going to render 100,000 homeless. Evictions during a pandemic are not only inconsistent with the ‘stay home’ policy but forced evictions are a violation of international human rights law, including the right to housing.

The treatment extended to the residents is also contradictory to the Kant Enclave violators who were provided compensation and the high-end developments beside Khori Gaon, whose existence has not been questioned.

The state’s discriminatory practices highlight the unequal citizenship experienced by the poor. The middle class and elites more often support their exclusion, producing and maintaining the inequalities. The houses the basti dwellers live in are often their only asset.

Evictions not only render them homeless but takes away their power to negotiate and engage politically. The Khori Gaon eviction must be stopped.

Ishita Chatterjee is a PhD Candidate, Faculty of Architecture, Building and Planning, University of Melbourne.

The author would like to thank Nirmal Gorana, general secretary of Bandhua Mukthi Morcha, for his inputs, and dedicate this article to the brave residents of Khori Gaon.