Only six states have the rules necessary to operationalise the PESA Act's provisions – yet the myth that PESA is alive and kicking prevails. 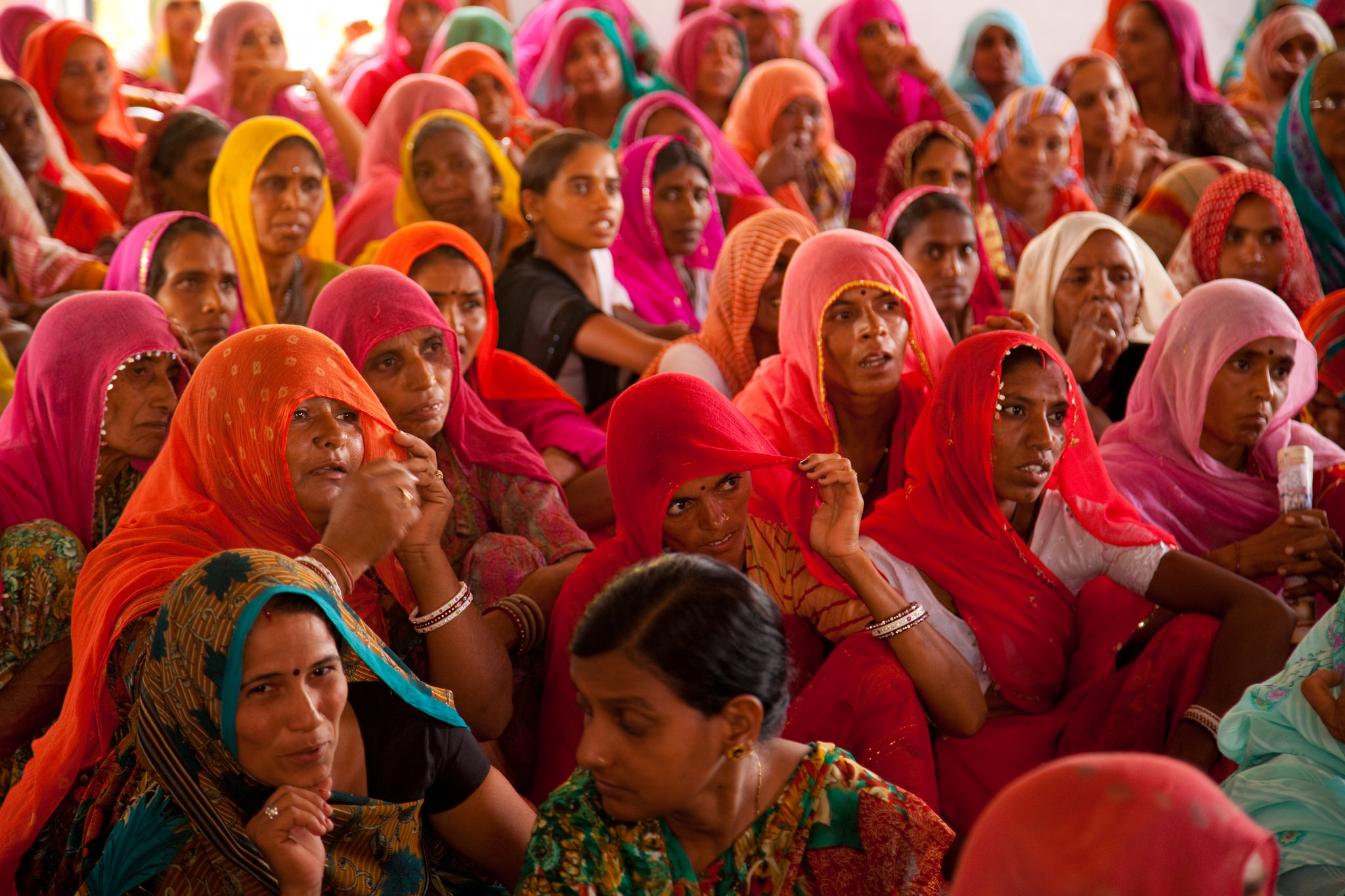 A quarter century ago, on December 24, 1996, the Parliament enacted a law unlike any other in the country. This was India’s first law to actually recognise people’s powers, in the form of the gram sabha at the hamlet level. This path-breaking legislation was the Provisions of the Panchayat (Extension to the Scheduled Areas) Act of 1996, or PESA. The habitations where scheduled tribes (STs) were the preponderant social group were notified as ‘scheduled areas’ by the President of India under Article 244 of the Constitution.

For a gram sabha to be autonomous, PESA rightly insisted that “panchayats at the higher level do not assume the powers and authority of any panchayat at the lower level or of the gram sabha” (Section 4n). This is possible only if the structures above the gram sabha are autonomous in their own domains. So PESA required that these structures also have considerable political autonomy, by adopting “the pattern of the Sixth Schedule of the Constitution” (Section 4o) with legislative, judicial and administrative powers.

Predictably, both state and the Union governments have worked to ensure these two crucial elements are unavailable – lest vibrant, democratic gram sabhas undermine the governments’ well-entrenched powers.

The 10 states with scheduled areas subsumed the gram sabhas in the areas under the general ‘Panchayat Raj Institutions’ (PRIs), where a gram sabha is an ornamental afterthought at best. The PRIs were already the emasculated appendages of government departments and their programmes. India’s gram sabha project was thus buried alive.

In the country, STs are not notified in Punjab and Haryana and the UTs of Chandigarh, Delhi and Puducherry. Scheduled areas have been notified in Andhra Pradesh, Chhattisgarh, Gujarat, Himachal Pradesh, Jharkhand, Odisha, Madhya Pradesh, Maharashtra, Rajasthan and Telangana.

Also read: Interview | ‘Adivasi Culture and the Forest Are Linked. PESA Looks After Both’

However, thousands of habitations in the states where STs are the major social group have been left out. Of the 640 administrative districts, 104 have scheduled areas, 36 are fully notified and 68 are partially notified. Some 11.3 % of the total geographical area of the country is notified scheduled area. And about 5.7 % of India’s population – both tribal peoples and otherwise – resides here; but only about 35.2% of STs reside in scheduled areas.

The majority of India’s STs continue to be denied their special constitutional protections. About 53% of the population in scheduled areas are STs – despite the massive influx of outsiders, ‘development’ projects and the resulting displacement. 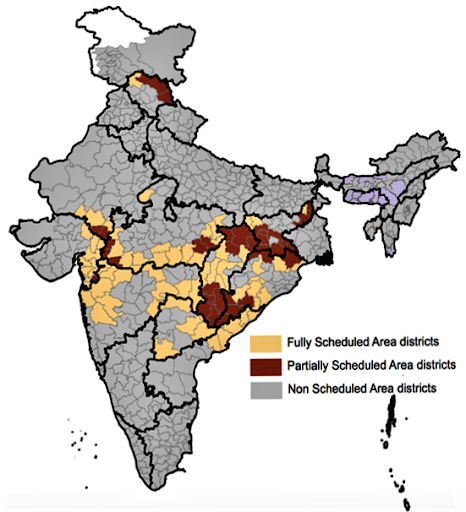 The process for scheduled area notifications has not been carried out in 11 of the 12 remaining states eligible under the Fifth Schedule of Article 244. Kerala submitted a proposal to the Indian government to notify 2,240 habitations – the result of a decade-long Adivasi struggle – in November 2014. It has yet to bear any results. Assam, Meghalaya, Tripura and Mizoram are not eligible because they are governed by the Sixth Schedule, where autonomous districts and autonomous regions are notified instead.

The Constitution (73rd Amendment) Act of 1992 empowered state governments to enact suitable legislation to establish PRIs as units of self-governance. But the amendment exempted its application to scheduled areas. The Parliament was to extend the provisions of this amendment to scheduled areas, with the requisite modifications, through suitable legislation. So it enacted PESA. The provisions of PESA were then to be incorporated into the state Panchayat Raj Acts in eight states with scheduled areas within a year.

Also read: An Anti-Forest Policy: Rhetoric or Sleight of Hand?

Andhra Pradesh, Gujarat, Himachal Pradesh, Madhya Pradesh, Maharashtra, Odisha and Rajasthan amended their state Panchayat Raj laws from 1997 to 1999 (see table). Jharkhand brought PESA provisions in 2001 after it was constituted in 2000. Chhattisgarh and Telangana were carved out along with parts of scheduled areas in 2000 and 2014 respectively. None of these states bothered to operationalise PESA for over a decade. In fact, most laws of both the state and Union governments that are contrary to the state PESA provisions are yet to be amended.

Only six of the 10 relevant states have rules to operationalise PESA provisions (see table): Andhra, Telangana, Himachal Pradesh, Rajasthan, Maharashtra and Gujarat. So PESA is effectively nonexistent in these 10 states. Yet the myth that PESA is alive and kicking prevails.

The Constitution confers extraordinary powers under Section 5 of the Fifth Schedule to prevent the application of any law passed by the Parliament or Assembly in scheduled areas, and to modify them with regard to their applications. But most governors have acted in ignorance of this power.

PESA’s tribulations don’t end there. In 1992, the 74th Amendment to the Constitution mandated the government to set up and distribute powers to urban local bodies. The scheduled areas were once again exempted from its application, and rightly so. Subsequently, the ‘Municipal (Extension to Scheduled Areas) Bill’ was introduced in Parliament in 2001. The Parliamentary Standing Committee on Urban and Rural Development examined it and recommended its adoption in 2003. The Bill was last listed for discussion in Parliament in 2010 – and hasn’t been heard of since.

By 2010, more than 200 such bodies governed urban areas within scheduled areas. More and more panchayats are also being upgraded to municipalities. By denying the special governance provisions to the population of scheduled areas, the governments have been taking these areas out of the purview of PESA, and the direct democracy of the gram sabhas.

In March 2010, the Ministry of Panchayat Raj drafted three sets of amendments to the Constitution to radically restructure local governance. They aimed to usher in full-blown democracy by fusing together the PESA of the Fifth Schedule with the provisions of the Sixth Schedule, to be applied across the country.

The ministry sent the proposal to the states for comments – but again, there hasn’t been a peep about what happened next.