In the days leading up to the nationwide lockdown, many reports of police attacking homeless people surfaced. With nowhere to go, this vulnerable section of the population cannot 'stay home'. These sermons, however, had no meaning for the 20-odd Pardhi families that were brutally attacked and evicted from the footpath outside Bahar cinema in Ville Parle. During the early hours of March 21, when Dhansingh Kale and his family were sleeping, the police from the Ville Parel police station began beating up old and young alike. Even toddlers were roughed up, Kale says. This attack, he says, was unprovoked and the police wanted the streets to be “clean”.

Govt must set up safe shelter homes before beating up the homeless people n clear streets.

Vile Parle Police lathi charged and beat up men, women and children on the streets. @dyficec activists found this out during their visit to help them 2b safe from Covid-19@OfficeofUT
1/n pic.twitter.com/rfxU38iPzm

The Pardhi community, a highly stigmatised and criminalised tribe in Maharashtra and other central Indian states, has always attracted the ire of the police. This Denotified Nomadic Tribe (DNT), some subcastes of which are classified under the Scheduled Tribes category in Maharashtra, live on the fringes, with very little state support.

Since the attack on March 21, the families have dispersed. While some have moved out of the city limits, others have gone to stay with their relatives. Similar cases of the police attacking homeless people have been reported in many states.

Kale, who knows very little about the novel coronavirus, says all he has heard is that mobility causes its spread. “It is the rich, mobile people who got this disease to the country and the government is keeping them in safe shelters to ensure they don’t spread the disease. But why doesn’t it think of us? Evicting us and forcing us to move right now could kill us,” an anguished Kale said over the phone. He and four members of his family are presently put up at a relative’s shanty in Nalasopara, situated in the northern end of Mumbai. A family living on a footpath. Photo: YUVA

Just ahead of the shutdown, as many as 64,000 passengers, mainly Indians, had returned to the country. Their return increased the country’s vulnerability and to break the chain of a possible community transmission, the entire Maharashtra state first and subsequently the whole of India has been put under a strict lockdown.

This decision may be the only measure available at this hour, but it has a terrible impact on the country, its economy and most importantly, on its most vulnerable class.

Homelessness is symptomatic of every large city which witnesses both inter and intrastate migration. Many nomadic and denotified tribes, like Kale’s, continue to lead a nomadic life, traveling to different places in search of work and shelter. They have for years made footpaths and spaces under the flyovers their houses.

The 2011 Census data says there are 57,416 homeless people in Mumbai. This figure is an absolute underestimation, say most people working in the development sector, who argue that the actual figure is at least four times this figure. “Our estimate is at least, if not more, two lakh people live on the streets and footpaths and open spaces in the city. These people lack the most basic facilities and are dependent on daily labour work,” says Jagadish Patankar of the Centre for Promoting Democracy, an organisation that works closely with the urban poor.

Over a decade ago, the Supreme Court in its judgment on the homeless persons in the country had directed each state to take their problems seriously and build one shelter home per one lakh population. The judgment observed:

“Article 21 of the Constitution states that no person should be deprived of his life or personal liberty except according to the procedure established by the law. Over the years, this Court’s jurisprudence has added significant meaning and depth to the right to life. A large number of judgments interpreting Article 21 of the Constitution have laid down right to shelter is included in right to life.”

If the civic authorities had honoured the Supreme Court’s judgment, Mumbai, with a population of over 1.84 crore, should have at least 184 shelter homes. But it only has 18 functioning ones, of which over 12 are exclusively run for minors. Another five, the state official claims, will soon be set up.

A homeless shelter in Mumbai. Photo: By arrangement

So, for families like Kale, when the state shirks its responsibilities off, the only option available is to survive on the roads.

For administrative purposes, the term “homeless” or houseless are defined as those who live in “the open or roadside, pavements, under fly-overs and staircases, or in the open in places of worship, mandaps, railway platforms etc.”

By this definition, only a minuscule 0.14% of the total population can be termed as “homeless”. Under this definition, the families living outside the Jogeshwari railway station are not homeless. These 250-odd families had lost their houses in a demolition drive that was conducted two years ago. Since then, they have lived in broken structures, trying to cover themselves with tarpaulin sheets every time the weather gets rough.

“These families are dependent on neighbouring bastis, and buildings for water. Since the state announced a complete lockdown, the families here are desperate for drinking water, leave alone to wash their hands and for other sanitary purposes,” shares Pooja Yadav, a project coordinator with Youth for Unity and Voluntary Action (YUVA). Yadav, who had been to the shanty last week, says the families there are on the brink of starvation without jobs, water and shelter.

“The police have been using force and raining lathis on those trying to fetch water. I met several women who expressed difficulty in accessing toilets. Many menstruating women did not find enough water to follow sanitary practices,” Yadav shared.

Sitaram Shelar, convenor of Pani Haq Samiti, a collective that has been addressing the issue of water in the state, estimates around 20 lakh people in the slums – both regularised and termed “illegal” – under the Mumbai Metropolitan Region are deprived of access to water. “The government gives multiple reasons for this. In some cases, the land they are living in is disputed and in some, the process of documentation delays the process. Either way, it is the poor who suffer.”

YUVA is a community organisation that has been working in some of the poorest wards of Mumbai’s civic bodies. In the past week, their volunteers have been traveling to bastis to identify the most vulnerable families and provide them with food grains that would last for at least a week. A woman cooks on the footpath in Mumbai. Photo: YUVA

Building shelter homes is the responsibility of the individual municipal corporations and councils, which receive funds from the Deendayal Antyodaya Yojana – National Urban Livelihoods Mission (DAY-NULM).

Ravi Jadhav, the state shelter manager, appointed under the DAY- NULM, agrees that a lot needs to be done in the state. “There are around 76 shelter homes in the state. Efforts are constantly being made to increase the capacity of the existing ones and also have new spaces and organisation identified to run the shelter,” he told The Wire. Jadhav also said that the state is yet to direct them to take any new measures to arrange protective living conditions for those on the road. “There has been no communication about the coronavirus so far,” he said.

In reality, however, Maharashtra, like any other state, has only managed to tie up with different NGOs involved in helping the urban poor. Most of the 76 shelter homes are temporary ones that are available only for night shelter. These spaces are not adequate in terms of sanitation and space. The tie-ups with the NGO were not done in accordance with the demand on the ground, but arbitrarily on the basis of the willingness of the organisations to tie up.

“Maharashtra has been violating the Supreme Court order for over a decade now. Forget the underplayed figure of population explosion in the state, the government here is not even able to provide for those it enumerated in the 2011 census,” Patankar points out. 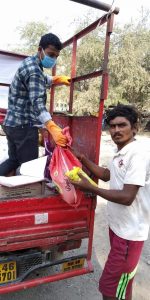 Amrutlal Betwala, a community worker, said the situation on the ground is alarming and he fears deaths due to starvation. “Forget the coronavirus, some families will certainly die of hunger,” he said.

YUVA’s relief kit contains pulses, rice, wheat flour, oil and salt. “This is the bare minimum, but it will at least ensure they survive,” shared Amit Gawli, another volunteer. In one week of survey work, Gawli had managed to reach out to several aged and disabled persons in Malwani slums.

He said the slums lack water facilities and feared the lockdown could have a catastrophic impact on the lives of thousands living in precarious conditions.

Even before the state government had announced a lockdown, Anganwadi workers in Mumbai had to stop working. This meant that children in most slums of Mumbai were not getting their daily food and, putting additional strain on the adults of the families. One Anganwadi worker who works in Mandala, a north-eastern slum settlement of Mumbai, told The Wire that she has been reaching out to NGOs to step in until the state makes some provisions available.

“There are at least 20-25 kids in my locality who will starve if food is not made available to them immediately. I raised some funds locally and arranged for glucose biscuits and rice puffs. But this won’t suffice,” she said.

Most parents have been lining up at her residence, asking for help, she says. “My heart breaks to see them in such a desperate condition.”

In 2014, PM Modi had promised houses for all homeless people by 2022. He said over four lakh houses, and not just shelter homes, were to be built by 2022. This promise, six years on, feels like rhetoric.

But in the extraordinary times that we are living in right now, if the coronavirus infection enters the community transmission level, its effects, especially on the homeless citizens, would prove deadly. It remains to be seen whether the government, at least to contain the virus, will ensure the right to life with dignity of homeless persons and provide them with shelter and hygiene.