Two landslides in Kinnaur last summer which claimed 22 lives have made the local population more aware of the ecological dangers posed by hydropower projects, such as the proposed Jangi Thopan Powari project. 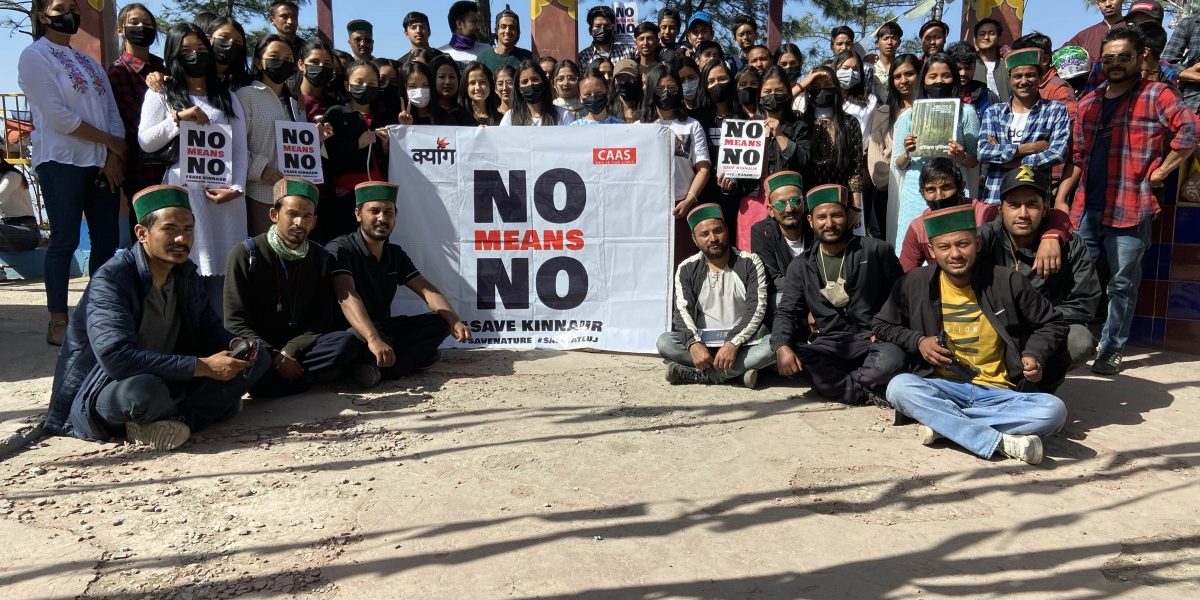 Chandigarh: ‘No means no.’ The slogan reverberated through the air at a special gram sabha called by the Moorang gram panchayat in Himachal Pradesh’s Kinnaur district last month as its members refused to give their consent to a proposed 804-megawatt hydro-electric project in their area.

Moorang is among the six villages that would be affected by the Rs 5,700 crore Jangi Thopan Powari Hydroelectric Power (JTP HEP) project, allotted by the current Bharatiya Janata Party (BJP) government in the state to the Satluj Jal Vidyut Nigam Limited (SJVNL), a government undertaking, in 2018.

The panchayats of the affected villages have, in the past, passed resolutions against the project, which was first mooted in early 2000.

However, two landslides in Kinnaur last summer – one which claimed nine lives and another where 13 people were killed – really turned the local tribal communities against the widespread ecological destruction reportedly caused by such power projects.

Since August last year, locals have been running a dedicated campaign under the slogan ‘No means no’ to stop the sanctioning and commissioning of any new hydel projects in their area and to save whatever biodiversity remains.

As per reports, hydro projects generating over 3,000 megawatts are already running in Kinnaur and many more, including the JTP HEP, are in the pipeline.

Anoop Kumar, sarpanch of the Moorang Gram Panchayat, told The Wire that Kinnaur is a cold desert and that the people mainly survive on agriculture. Hydro power projects, however, have taken a major toll on crop production, besides affecting the lives of the locals due to climate change.

“There was a time when our area was covered with snow till April,” Kumar said. “Natural springs from mountains would ensure enough water for drinking and irrigation. (Now,) there is no snowfall in the area after January. Water scarcity has become a major problem.”

“Thousands of trees have been chopped to lay transmission lines,” he continued. “Besides, the regular dust in the air, due to the construction of these hydro power projects, has affected the pollination of apple crops. Our lives have been doomed because of these projects. We don’t want any more projects now.”

Protesting villagers part of the Moorang panchayat. Photo: By arrangement.

Kumar also said that gram sabha was called on the directions of the deputy commissioner, and said that they have not given a no objection certificate (NOC) for the project because the locals don’t want it.

“In case the government tries a back-door entry to set up this project, we will not sit quietly. It is a do-or-die situation for us,” Kumar added.

Apart from Moorang, the gram panchayats of three more villages – Kanam, Spilo and Aakpa – too refused to give permission for the project through gram sabhas held earlier this month.

The panchayats of the two remaining villages – Jangi and Rarang – have their gram sabhas scheduled for later this week, on April 26 and April 30 respectively. Their decision is not hard to guess.

Both these villages even boycotted the recent by-election for the Mandi parliamentary seat in which the ruling BJP suffered a humiliating defeat.

Shashi Kala, sarpanch of Aakpa village, told The Wire that it is common knowledge that these projects have brought misery upon the local population.

“There are examples of people being forced to leave their homes and villages after the commissioning of the projects,” she said. “Our area, where the new project is being planned, will be ruined if this project is allowed to be set up. We request the state government not to go ahead with this project since the villagers have clearly rejected it in their council meetings.”

As per the government records, the JTP HEP will be a run-of-the-river type project, which involves the construction of a concrete gravity dam more than 88 metres above the deepest foundation level across the river Satluj, near Jangi.

The diversion of water for the dam will involve the construction of a 12-km-long tunnel that passes through the six affected villages, as mentioned above.

The project was first mooted in early 2000 under a Congress government. After the bidding process, the project was allotted to the Netherlands-based Brakel Corporation in 2006. The bid was, however, cancelled in 2009 after the company had failed to pay the upfront premium.

Reliance Power, the second-highest bidder after Brakel, had then sought the project and had offered Rs 37 lakh per megawatt as the upfront premium.

On August 5, 2016, the then government, again headed by Congress, decided to allot the project to Reliance, which declined to take it up.

A year after the BJP formed government in the state in 2017, the project was finally allotted to the government-run SJVNL.

Initially, the project was expected to have a generation capacity of 960 megawatts which, after years of delays, came down to 804 megawatts due to various factors, including the decrease in water flow of the Sutlej and the release of a mandatory 20% free flow into the river.

Jiya Lal, convener of Jalpa-based Himlok Jagriti Manch, a forum that is spreading awareness on the adverse effects of power projects in the region, told The Wire that the increase in landslides in Kinnaur is a direct consequence of so many hydel projects in the area.

“Using blasts to dig and construct underground tunnels for these hydel projects has done permanent damage to farm lands and the houses of a large number of local inhabitants,” Lal said, adding the impact of climate change on day-to-day life is already visible in the upper regions of Himachal.

“If new hydel projects are allowed to be set up, human life will be more miserable in the sense that water flow in rivers on which these hydro projects are commissioned will massively go down,” Lal said.

“Natural springs are the major source of drinking water in the upper Himalayan region and are already in danger due to climate change.

He said that deforestation is another major issue. Hundreds of trees have already been cut to lay transmission lines and one can imagine that the problem of soil erosion – and consequently, landslides – will be exacerbated if more trees are cut down for new projects.

According to Lal, the JTP HEP is being proposed in an area that is already fragile. The project, if commissioned, could turn the lives of people living there upside down.

“That is the reason people are up in arms and are rejecting the project in their gram sabha meetings… they have sensed that it is a matter of their existence now. It will be too late if they don’t intervene at this stage,” he added.

The villagers, said Lal, did not even allow the company to conduct a technical survey of the area.

According to him, Kinnaur, being one of Himachal’s notified tribal area, has certain privileges. The government, therefore, must respect the decision of the tribal people and not try to find backdoor means to set up the projects when the locals have clearly spoken their mind.

Meanwhile, the Himachal language and culture department’s NOC to the SJVNL certifying that there are no archaeological or historical sites in the proposed affected area, has shocked locals.

Sunder Negi, an activist opposing the project, said that the NOC was a major joke. Kanam, one of the affected villages, is a prominent monastic village, also known as ‘The Land of God’. The area is noted for housing seven monasteries, big and small, built by Rinchen Zangpo, a prolific translator of Sanskrit texts into Tibetan during the spread of Buddhism in the region. 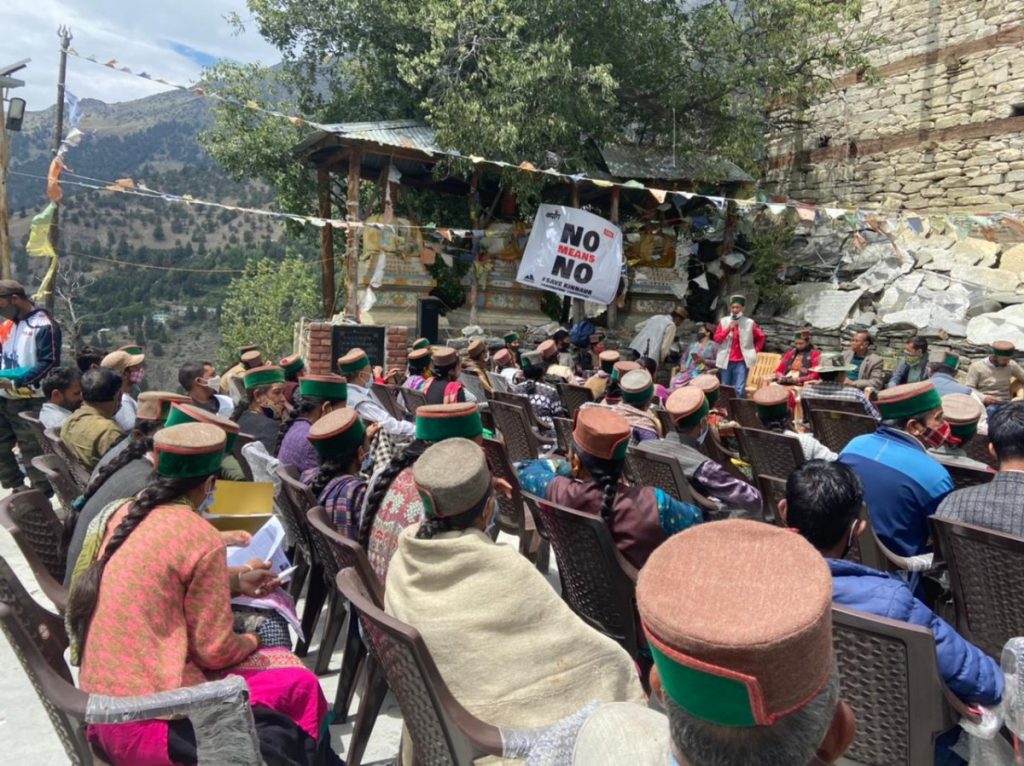 Villagers at the Kanam gram sabha. Photo: By arrangement.

Negi said the monastery has an idol of Buddha made of gilt bronze, with blue hair. Located at the foot of the Nessang Valley, Kanam is supposedly one of the oldest trade routes to Tibet as well.

Dinesh Negi, who is the convenor of Kanam Youth Club, said that the ecological imbalance in the area has already affected the lives of the locals.

Floods a few years ago had caused widespread destruction in the area. A government estimate pegged the total loss to the tune of Rs 80 crore. “We fear more such floods on a regular basis if our area is touched by the new project. We will be doomed,” he added