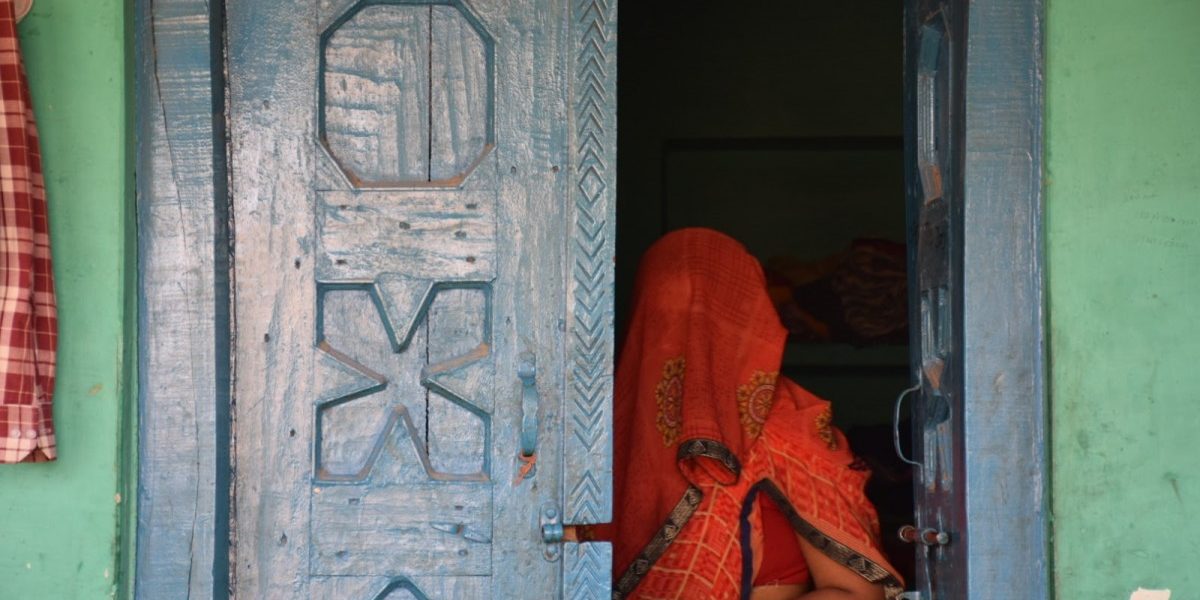 Hathras, Uttar Pradesh: “I am fighting this case pro bono because I genuinely believe they are innocent,” Munna Singh Pundir, counsel for the four men accused of gangrape and murder in the Hathras case, told The Wire. As he said these words, a few men sitting alongside him nodded in agreement.

Pundir, a man in his 50s, sits in his chair in a small chamber inside the Hathras district court with his initials engraved above the door.

He firmly believes that the main accused in the Hathras gangrape and murder case, Sandip, and the deceased were in a relationship and that neither of their families approved of it. He told The Wire, “For the girl’s family, it was embarrassing to know that their daughter was making relations with a boy before marriage,” Pundir claims. As a result, he says, the woman’s family killed her to “safeguard the honour of the family”, the lawyer says.

This claim, first propounded by right-wing groups, is among the many conspiracy theories and straw man arguments that the lawyer relies upon to make his case. He also brushes aside the CBI chargesheet, which invokes charges of rape and murder against the four accused.

It has been almost six months since the 19-year-old Dalit woman succumbed to her injuries on September 29, 2020, 15 days after she was found in a field in Boolgarhi village. Before her death, she had made a dying declaration accusing four upper caste men of gangrape.

A forceful cremation by the Uttar Pradesh police in the wee hours of the night followed the day after her death. Media – TV, print and digital – descended on her village for days, even as the police claimed that it was not a  case of rape-and-murder, citing the victim’s medico-legal examination report. The Wire had exclusively revealed that this was not the case.

The family is relieved that they aren’t surrounded by as many mediapersons. For them, narrating the story of their daughter’s rape and murder is difficult. Despite this, they have repeated it several times.

“Can a gangrape happen in broad daylight?”

Pundir, the lawyer for the accused, asks, “Why were the names of the three other accused (apart from main accused) added later to the FIR?” He insinuates that the victim’s family is trying to “incriminate the accused” to settle “personal scores”.

Luvkush, one of the accused, whose bail application was rejected by the district court, also claimed that his name had been dragged in the case owing to “pre-existing annoyance and enmity with the family of the applicant.” Pundir reiterated that Luvkush’s name was added to the FIR in Chandpa police station after the victim’s family was “tutored” by politicians.

“You yourself imagine, there were two uncles (Ravi and Ramu), one nephew (Sandip) and Luvkush’s mother was also around the corner, can a gangrape happen in broad daylight?” At this point, he pauses and waits for this correspondent to respond. Of the four accused, three are related and lived together. Ramu and Ravi are Sandeep’s uncles while Luvkush lives nearby.

The victim’s father, refuting Pundir’s argument, said that there have been instances of rape within a family, so these kind of arguments do not hold. “While committing a crime, any kind of family relations don’t matter.” He then points to a recent case in Mau, where a middle-aged man raped his three-year-old niece. “Rape is a horrible crime and is many times committed by family members. It doesn’t matter what the relationship between the accused men is,” he said.

He urges the media to focus on other brutal cases of rape and sexual assault in the state. 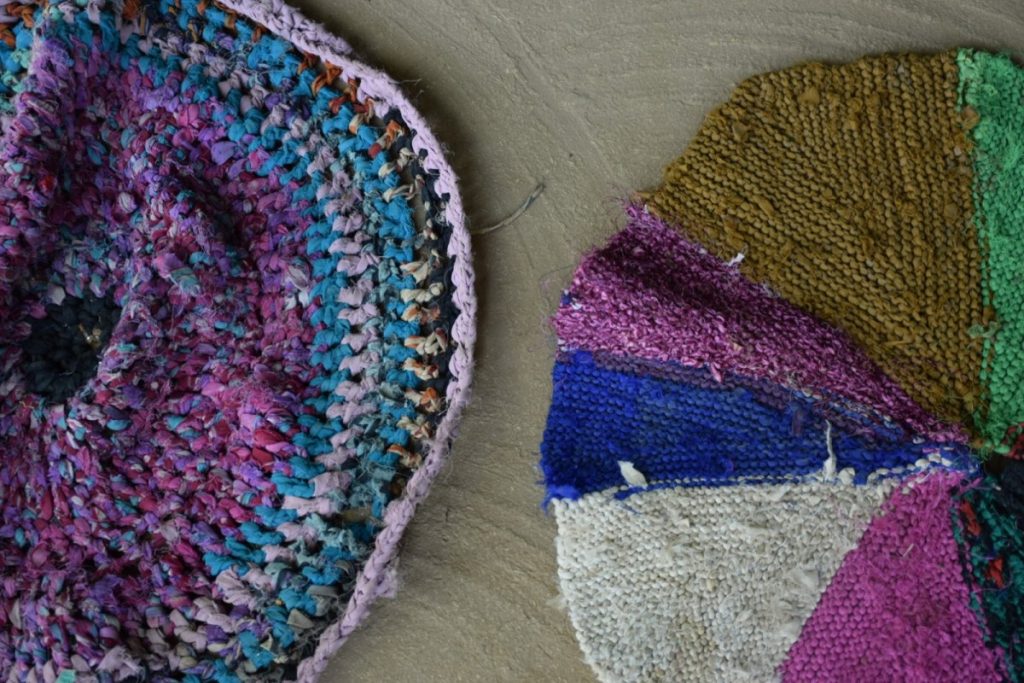 A set of doormats made by the 19-year-old woman. Photo: Ismat Ara/The Wire

Pundir continues his rhetoric in a manner that suggests he has perfected it through practice. He told The Wire, “The deceased’s elder brother was to be examined as a witness, but he has been evading. He is denying evidence on one pretext or the other. He is someday ill, someday out of station. The only reason for this is because he is scared the truth will come out.”

The victim’s elder brother told The Wire that it was true that he was ill, but denied he was “evading” examination in court. “Here, you can see my medicine,” he says.

Seema Kushwaha, the victim’s counsel, has been getting threats, the victim’s brother alleged. “When we went to the district court for our hearing one day, random men started staring at our lawyer in a disrespectful manner. A man passed by on a bike and said, ‘Seema, tu apni seema paar kar rahi hai (Seema, you are crossing your limit),” he told The Wire.

Despite a complaint being registered before the Allahabad high court, Pundir denies the allegations of harassment and threats as “theatrics” by Kushwaha, because she wants the ongoing trial to be transferred to Delhi. “She will not have to travel to UP for every hearing. And she also knows that all the four accused men come from poor, labour class families and would be unable to bear the travel expenses to Delhi. Hence, she created a scene in the court with false allegations and stories about being abused and threatened,” he said.

In October, the case was handed over to the CBI by the Uttar Pradesh government, amid outcry and immense public pressure over its handling of the case. Two days after the Supreme Court asked the Allahabad high court to monitor the CBI probe, the family of the victim said they wanted the case to be moved to Delhi.

The CBI submitted its chargesheet on December 18 in the special judge’s court in Hathras, invoking charges of gangrape (sections 376, 376-A and 376-D IPC) and murder (section 302 IPC), against all four accused, besides also invoking sections of the SC/ST (Prevention of Atrocities) Act.

Pundir told The Wire, “The CBI chargesheet was filed only on the basis of the dying declaration of the deceased, which was a tutored one – by the girl’s family and some political people.”

“What do you believe?” the lawyer asks this correspondent. “I am not a party in this case, it hardly matters what I think,” I tell him. A man sitting next to him tells me, “You have been asking him odd questions. It doesn’t matter where you are from. Talk about PFI and the funding involved in this case,” he says, referring to the UP police’s allegation that the Popular Front of India was trying to incite caste-based tensions in Uttar Pradesh.

“Everything reminds me of her”

Back in Boolgarhi village, the victim’s family sits in their house surrounded by members of the CRPF. Visitors are not allowed and media persons need to show their ID. This correspondent’s bag checked and details were logged into an entry register. Every few days, ration is sent to the family. They are not allowed to go out. They are still at risk.

In three shifts, 80 CRPF personnel patrol and guard the house. There are eight CCTV cameras too. 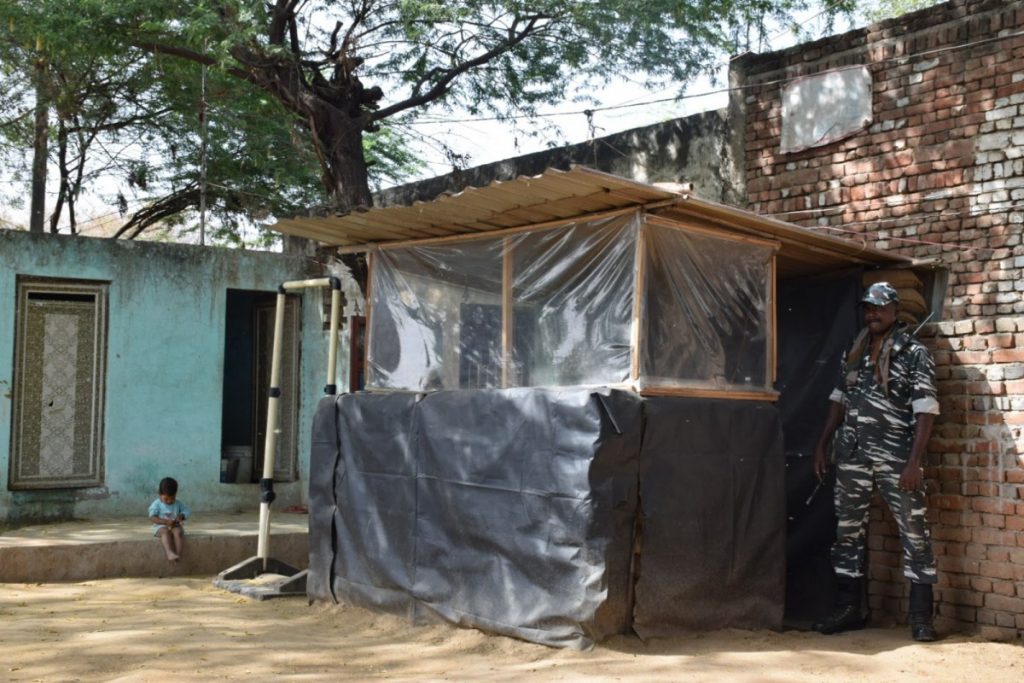 Two nieces of the victim, who are five and two years old, play with the CRPF personnel. “They often bring us toffees and chocolates,” the officers say. The 2-year-old has learnt to salute while chanting “Jai Hind”. A third niece, only 6 months old, sleeps inside. She was barely a few days old when the victim died.

The victim’s mother sits inside the house. She weeps when she remembers her daughter. She says, “She would wake up in the morning, give tulsi water, play with the kids, make rotis with bajra…”

“Everything reminds me of her,” she adds.

“We will not be able to live a normal life until we get justice for our daughter,” she notes.

The victim’s mother says that nobody from the entire village has come to their house since the incident.

“When [the accused] come out of court after the hearing, we see them smiling and waving. They are shameless,” the mother says. She has full faith in the judiciary, she says, but insists that the case be shifted to Delhi considering everyone’s safety.

There are two ongoing court cases the victim’s family is dealing with currently. The first is the gangrape and murder case being heard by a special court mandated under the SC/ST (Prevention of Atrocities) Act in the Hathras district court. The second is regarding the forced cremation, which is being heard by the Lucknow bench of the Allahabad high court.

Promises made by UP chief minister Yogi Adityanath were “empty”, she says. The day the woman was cremated without her family’s consent, Adityanath had tweeted saying that clear instructions had been given for “prosecuting and effective lobbying in fast-track courts” against those accused in the Hathras case. However, the case is still not in a fast-track court. Three of the four accused men have applied for bail on the grounds that honour killing cannot be ruled out.

The chief minister had spoken with the victim’s family the next day and promised a compensation of Rs 25 lakhs, a junior assistant job for a family member and a house in Hathras under the State Urban Development Agency (SUDA) scheme. Apart from the compensation, the family has not yet received the support promised by the CM. “Mahaul shant karne ke liye jhoote waade kiye the,” the father of the victim says. They made false promises to diffuse the situation. The 6-month-old niece of the victim sleeps in a hammock. Photo: Ismat Ara/The Wire

“People from the village write posts on Facebook calling us anti-nationals and traitors. One post read, ‘Bharat bhumi kam pad jayegi tum logon ko, tum Pakistan chale jao (If India is not enough for you, go to Pakistan),” the elder brother says.

At this point, for the first time, the victim’s father breaks into tears. “The only thing that gives me strength to carry on is that when I met my daughter in the hospital, I asked her if she was scared. She said no. She asked me to be strong too,” he recalls.

Holi is approaching but the family has decided not to celebrate. “Even on Diwali, we did not light even one candle. Festivals don’t mean much anymore,” the eldest brother of the victim tells me.

A CRPF personnel announces that a relative has come to see them. The family asks them to let her in. As she enters, the mother of the victim approaches her and cries, the pain of her daughter’s death still fresh in heart.