HateHatao is part of Citizens for Justice and Peace's 'Hate Watch campaign', which spreads awareness and understanding about speech that incites hate and violence against marginalised groups. 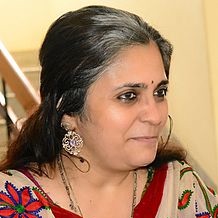 Democratic societies are not free of either prejudice, stereotype or ‘other-ing’. Arguably, democracies in the making, or unfinished democracies, augment the cleavages already existent within structures of society and family to establish dominance. In itself, holding prejudices is not exceptionally Indian. Developed democracies have also been grappling with a spiral in hate crimes, most often targeted at already vulnerable communities.

‘Marry pure’, ‘choose the right caste and class’, the veg – non-veg divide, ‘brown and dark are not beautiful’, ‘fair means lovely’, ‘Muslim means barbaric’, ‘violent and Dalit means dirty and even untouchable’, ‘Christian in Western and foreign’ – is our way of dishing out prejudice.

But imagine the triangle that explains how prejudice exists and is nurtured; how prejudiced attitudes transform from attitudes into acts of exclusion and prejudice. How these, then, build up into discrimination – in employment, housing, educational discrimination, even harassment?

The next stage of escalation is the targeted violence against sections which include destruction of property, arson, desecration of places of worship and cultural symbols, attacks on faith systems – that is threats, assaults, terrorism and even murder. If unchecked, how do these, then, culminate into a full-blown genocide – described in international law as the deliberate, systemic extermination of an entire people?

Structural exclusion has often meant that to be economically disadvantaged is to be excluded from the policy and planning of the state. Homophobia directs hate against people who identify as LGBTQIA+. The key to understanding the politics of hate involves a calibrated understanding of rights: freedom, equality and dignity.

Liberty and Equality are harmonious rights not incongruous to each other. If free speech (Article 19(1)) is crucial to ensure that everyone gets to voice an opinion, the liberty or freedom of an Individual cannot wrest away either the equality (Article 14) or dignity (Article 21) – provisions that ensure non-discrimination of others. Article 21 ensures each one of us equality before the law.

These are some crucial pointers to understand hate speech.

Key to understanding what constitutes hate speech or hate writing is whether it, under scrutiny, affects the equality, fraternity and dignity of any section. Hate speech (writing) by its very nature seeks to diminish the targeted section’s participation in economic, political and social spheres. It attempts to reduce them to second class citizens, to wrest them of their basic rights. A crucial guideline is that inciting hate speech is a means of subordination.

Some other crucial pointers to understand hate speech/writing:

Who is the author? His or her power, stature or authority.

Who is the target victim? Section background.

An interesting example can be learned from the 2006 9th circuit court case, Harper v. Poway Unified School District 445 F.3d 1166. The nexus between equality and hate speech was most pertinently recognised where the courts banned school students from wearing T-shirts which carry homophobic content. The court recognised that such forms of speech would be detrimental to a historically vulnerable community. It would further disenfranchise the group, which is struggling to find an identity for itself.

A truly democratic society presupposes that there are various individuals and numerous communities living in conditions of equality and not subjugation. Hence, to engender equality, dignity and harmony it is necessary to curb hate speech. Hate speech also systematically dehumanises and degrades target groups. It aims at diminishing the self-worth of members of an identifiable group by forcing them to live in fear of expulsion or violence.

In the case of Francis Corailly Mullinv, The Administrator, Union Of India (1981), the court established the meaning of life under Article 21 is that of a ‘dignified life’. Therefore, dignity is elemental to the ‘basic personhood’ of individuals. It is based upon the belief that by virtue of being a human being, a person possesses dignity and has the right to live in such conditions of dignity.

The Indian democratic system has had an ambivalent record in tackling hate and incitement. Even our courts have resisted being unequivocal on the question. When the Bombay high court in the late 1980s and 1990s, in a slew of judgements upheld the law and penalised candidates for making supremacist and derogatory remarks (including misusing religion for political ends) during election time, the Supreme Court, in all except one case, overturned the verdicts.

India in 2019 is grappling with the abuse of the free speech doctrine, especially from elected officials holding positions of authority. It is crucial that Indian law, which empowers weaker sections from this misuse of the ‘free speech’ doctrine is invoked when it turns abusive and inciteful against marginalised sections.

This author’s engagement with the politics of hate has been individual and organisational. Through cjp.org.in, this three-decade-long experience has materialised into the HateHatao app.

Today, on the 71st anniversary of the assassination of Mahatma Gandhi, a true messiah of peace, we at Citizens for Justice and Peace (CJP) are strengthening our resolve to ending the culture of hate and bigotry that threatens the socio-cultural fabric of our nation. We are launching HateHatao, a revolutionary new app designed to fight hate that can be used by anyone with an Android smartphone. 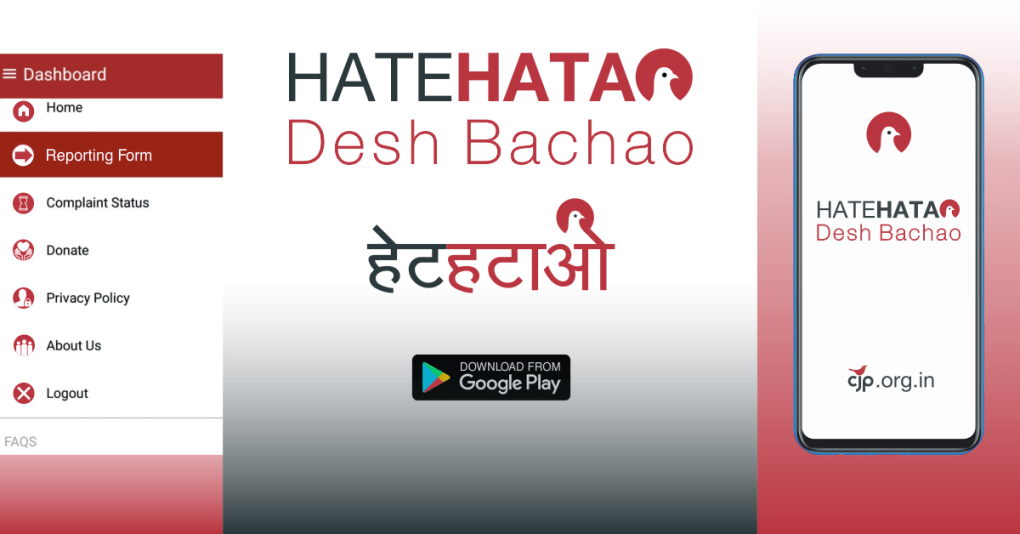 Credit: Citizens for Justice and Peace

In a growing atmosphere of communal hatred, bigotry, and violence, HateHatao will enable any person to report to us instances of hate speech, threats, and hate crimes, with the appropriate evidence, such as a screenshot, video or a picture. CJP will then take this up as a complaint to authorities such as the National Human Rights Commission (NHRC), the Press Council of India (PCI), the National Broadcasters Association (NBA), Facebook, Twitter and other social media platforms or law enforcement agencies. In the most serious cases, efforts will be made to lodge FIRs and pursue the cases in court.

The app is today out in a very basic form. There will be regular updates. CJP will also monitor incidents of hate and track their escalation to chart and understand how hate builds. These will be woven into our award-winning Peace Map initiative, and will help us predict and hopefully prevent possible outbreaks of violence that so often stem from hate. HateHatao is part of CJP’s Hate Watch campaign, which spreads awareness and understanding about speech that incites hate and violence against minorities and marginalised groups. The Peace Map is also integral to this campaign.

From its inception, Communalism Combat and Citizens for Justice and Peace, have been committed to combating hate speech, particularly since it frequently incites violence against marginalised communities. From our on-ground work through dialogue and Mohalla Committees, to winning a NASSCOM Award for our technology-driven Peace Map initiative, we have constantly devised innovative solutions to pre-empt the outbreak of targeted violence.

The HateHatao App will also share tutorials and classes on law and jurisprudence, share how judicial commission reports, analysing bouts of vicious communal violence, have viewed the pernicious role of hate speech. The objective is not simply to monitor the spread, reach and depth of hate speech and writing but to empower citizens in understanding the phenomenon and acting cohesively to nip its spiral and growth. In its essence, it ensures that the helplessness and anger that marginalised sections experience is now channelised into concrete, lawful intervention and action.

Teesta Setalvad is secretary, Citizens for Justice and Peace.