A SWAN volunteer breaks down the inadequate administrative response to issues faced by migrant workers in the industrial cities of Ludhiana and Noida. 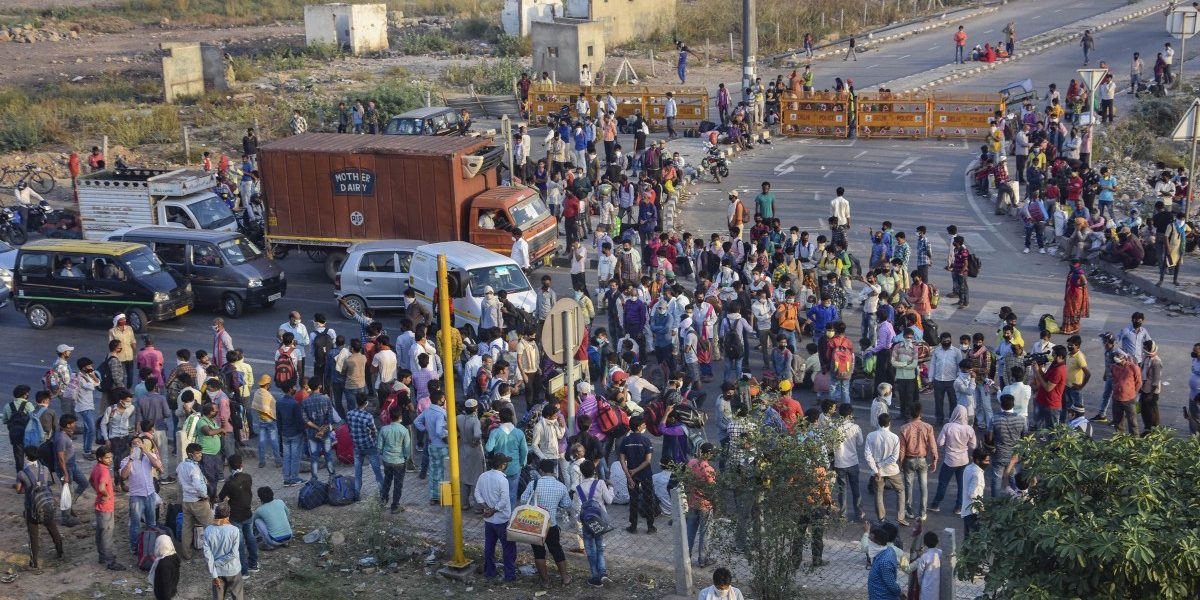 Babita Devi is stranded with her family in Ludhiana. Her son had an epileptic seizure since they had to reduce the dosage of his daily medicine. She broke down while speaking to me on the phone.

Manish, a worker stranded in Noida, said, “Woh helpline (18004192211 – Noida control room) toh hamesha busy hota hai, ek baar laga toh bole ham form bhar de rahe hai. Pucha ration kab milega toh bolte hai mujhe nahi pata, mera kaam bas form bharna hai. 15 din ho gaye koi sunvayi nahi hui’ (The control room number is always busy, I got through once and the operator said he would fill the form. When I asked him when would I receive rations, he said his job was only to fill forms. It’s been 15 days since and there has been no action).”

These are just two of the thousands of distress calls that we have been responding to as part of the Stranded Workers Action Network (SWAN).

Also read: I Drove From Chennai to Delhi During the Lockdown. Here’s What I Saw on the Way.

SWAN is a group of volunteers responding to distress calls from stranded migrant workers and has been engaged in relief work. From March 27 till May 7, SWAN has interacted with more than 22,000 workers, arranged for immediate relief to them, either in form of small bank transfers or by connecting them to a local organisation or government administration for rations.

I write this as a SWAN volunteer focusing on issues faced by migrant workers in the industrial cities of Ludhiana, Punjab and Noida, Uttar Pradesh. While there are several dimensions of vulnerability and complexities regarding migrant workers that need to be brought out, here, I will focus on two specific concerns pertaining to the inadequate administrative response.

The first is the unreliability and unreachability of centralised helplines and other such systems that the administration relies on to impart relief. Second is the inadequate and unreliable rations coupled with lack of sufficient cash in hand which has spawned new kinds of insecurities.

Also read: Who Can Afford to Be Hopeful During This Pandemic?

More than 40 days into an unplanned lockdown, one would have hoped that public institutions would have managed to respond to this crisis with empathy, urgency and innovative use of existing systems. But, on the contrary, city administrations have largely focused on technocratic fixes as opposed to tangible action on the ground. Each time we reach out to the administration for help, a slew of helplines are sent our way.

As per a recent RTI, there are no records of urban migrants for the administration to systematically cover them. This naturally makes it harder for the administration to cater to stranded migrant workers. Consequently, the workers fall through the administrative cracks. In Noida, with the help of civil society groups such as Wish India and Karma, SWAN was able to identify localities with  migrant worker clusters. In a rare instance, we managed to get the local MLA to act on it partially. In another instance, the sheer scale of distress became hard for the civil society organisation to handle. Attempts to urge the Noida administration to look into these localities more systematically have been futile so far.

In Gobindgarh village and other such labour clusters in Ludhiana, our team was able to get rations delivered to a few families by reaching out to the subdivisional magistrate (SDM). Within days, distress calls from other such families started pouring in. As of May 7, we had more than 400 families on record from these areas. Repeated requests for the administration to survey this area have been met with a stony silence.

The Punjab administration had earlier set up a helpline number – 1905. Now it has set up a web portal with a form for persons in need who are not covered under the Public Distribution System (PDS) to apply for rations. While a web portal is welcome, making it the only alternative to a defunct helpline without any paper-based alternatives through physical kiosks is a huge limitation. Further, there are no instructions of filling out the form for those unfamiliar with web-based forms. The form is also only in English thereby being a major obstacle for the largely Hindi speaking migrant population.

Out of ten people I sent the form to, six did not have a smartphone to fill it out. Of the remaining four, only three could register successfully while one kept having trouble with registration. In Jalandhar, local organisations have asked some cyber shops to fill out forms for migrant workers at a minimal fee, for which the organisations then promise to reimburse the workers.

To have to pay for one to avail of free rations highlights the insensitivity of this system. Migrants walk on the Delhi-Noida road during a dust storm on May 14, 2020. Photo: PTI/Vijay Verma

From the government’s perspective, only ration (which includes atta, sugar and channa in Punjab and atta, dal and rice in Noida) has been visibilised as essential for the poor and the needy. Oil, masala, vegetables, gas, milk for children, other nutrition requirements of pregnant women or even money to recharge phones have not been considered as essential. Phones are essential because receiving information about ration distribution and filling of forms require calling and internet facilities.

Migrant workers, now with the MHA orders permitting interstate travel, are also required to fill out web based forms for return journeys  and so far, many of these journeys have come at a cost and have not been state funded. The Central government continues its calibrated apathy on this issue.

Also read: ‘They Have Given Up’: Desperate Workers in Tamil Nadu Attempt the Long Journey Home

Contrary to the government’s lofty claims about its treatment of migrant workers, the SWAN report titled ‘32 Days and Counting: COVID-19 Lockdown, Migrant Workers, and the Inadequacy of Welfare Measures in India’, released on Labour Day presents a grim picture. It is based on interactions with around 17,000 workers.

While there have been some cases of positive administrative response in parts of the country, the general flavour has been one lacking compassion. ‘Hunger hotspots’ require much the same political vigilance and concern as ‘COVID hotspots’. “Corona maare ne maare, bhukmari se mar jayenge’ (we may or may not die of coronavirus, but we will certainly die of hunger),” said Kamlesh Kumar, who has been stranded in Ludhiana.

This unplanned and unilaterally decided lockdown has compelled those already on the margins of subsistence into further precarity. It has put the onus of receiving food and cash, their rights, on the shoulders of the helpless.

The repeated indignity they have been subject to is a reminder to refashion and re-imagine the relationship between the citizen and the State. The rights of citizens cannot and must not be reduced to even a perceived act of charity by the State. The need of the hour is to universalise rations with dal, soap etc, ensure a minimum of Rs 7,000 per month to each poor household and give a dignified option for the migrant workers to return to their homes. That’s the least a caring State must do.

Zil Gala is a student of St. Xavier’s College, Mumbai.

The author would like to thank Rajendran Narayanan and Maithali Patil for their inputs and suggestions.