'New India' and the Story of Judas: An Open Letter to Harsh Mander

'Do you remember that old disabled man whom you rescued from the road and sent to us for treatment? Or those street children who came to feast at your daughter’s wedding?' 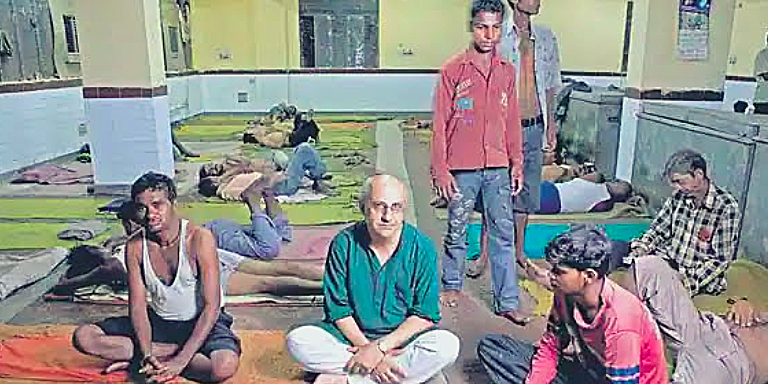 'Your organisation which provided food to thousands of stranded labourers following the untimely first lockdown is undoubtedly an act of defiance against those who boasted in clamping the strictest COVID lockdown on the planet.' Photo: Twitter

I hope you have reached Berlin safely although I know that being safe is not being happy. For that matter, being happy is also not an essentiality. Anyway.

This is a letter of apology. I am sorry. We all are sorry. I know that our collective apology won’t be enough to reduce your pain and frustration at the recent Enforcement Directorate and Income Tax department raids on your home and offices but unfortunately, this is all we can offer. We have metamorphosed into a nation with binaries – love and hate, Hindus and Muslims, us and them, the intimidators and the intimidated, the justice seekers and the justice deniers. I don’t know where we, the apologists, stand in this sub-typing but I am willing to remain unclassified.

I am sure you must have heard the story of the kiss of Judas. Judas identified Jesus to the police of Sanhedrin by kissing him in a conglomeration after the last supper. Jesus was then arrested and subsequently crucified. The story in this new India isn’t much different.

Do you know who must have ‘identified’ you to the mandarins of hate? Do you remember that old disabled man whom you rescued from the road and sent to us for treatment? Or those street children who came to feast at your daughter’s wedding? Or that homeless, diseased woman your team rescued from the street? And what about Bobby Deol – seven-year-old whom you met in the Dumagiri Part 2 char in Assam and who cried hugging you because his father had died by suicide as his name didn’t appear in the NRC list?

Yes, these are your ‘Judases’, cast in that mould by the state.

This new India doesn’t like people who are associated with the homeless, with the disabled, with the poor, with the diseased and the deprived. Look at all those incarcerated or labelled seditious by the regime – my friends Umar Khalid, Anand Teltumbde, Gautam Navlakha and the likes. They all have a common thread through their souls – they are the voice of the voiceless and dared to stand up for the rights of the underprivileged. They were kissed by the have-nots and hence identified by the regime and its strangulating arms.

The IT and ED raids aren’t a surprise to all those who know you and your commitment towards the poor. At a time when the powerful were tinkering with peacocks and privilege, how dare you serve food, shelter and healthcare to the homeless! Your book, Locking Down the Poor: The Pandemic and India’s Moral Center, is a testimony to this commitment and is a stone etched in our moralistic history which will give the coming generations a bird’s eye view of the civilisational demoralising we underwent as a democratic nation by giving up on our own people.

Your organisation which provided food to thousands of stranded labourers following the untimely first lockdown is undoubtedly an act of defiance against those who boasted in clamping the strictest COVID lockdown on the planet. At the time of the deadly second wave of COVID-19 in April-May this year, even I was surprised at the efficiency of your team in providing me help in cremating a couple of helpless victims who had been denied dignity in death.

All these recollections compel me to apologise again.

I vividly remember the morning when I read your sensitive op-ed in the Indian Express. It was entitled, Junaid, my Son. Junaid was lynched on a moving train as he returned home from Eid shopping. He was only 15-years-old when he was murdered. You wrote:

“Junaid Khan was my son. I did not know him when he lived. But in his death, in the way he died, I mourn him like a son.”

It made me weep. The whole day I thought of the trepidations of Junaid as he might have faced his monstrous murderers. But sir, his killers were granted bail by the Haryana high court. Does that worry me? Yes, it does. But does that make me hopeless? No.

Not till there is a Harsh Mander willing to accept Junaid and many like him as his son.

The legitimacy of violence and prejudice about which you write in your book Looking Away: Inequality, Prejudice and Indifference in New India, ironically makes me less anxious. It has a calming effect. The forebodings of the scalding summer of 2014, as you describe it, were always in the offing. We have finally arrived there. And in a way it’s good that we are finally there – into the deepest, dark hole of besmirched morality. The good news is we cannot fall deeper. We can only rise up.

I am sure that justice and law will prevail one day. I am also sure that no measures will work to intimidate a man like you. What I am not sure is if this is their only effort to corner you away from your wonderful social work. But who cares? In the words of Faiz:

(‘This is how mankind has always fought oppression,
Neither are their rituals new, nor are our traditions novel.
This is how we have blossomed flowers in fire,
Neither is their loss different, nor is our victory newfangled.’)