How Gurugram Fights the Coronavirus, and Hunger

Activists and the administration have come together to form a workable template that could be exported to other places.

The 21-day lockdown, which is likely to be extended till the end of the month, has left millions across the country without any source of livelihood, food or shelter. As stories of hunger and deprivation hit headlines and the government comes under the scanner for failing to address this food emergency, a joint initiative by the police, civil society and NGOs in Gurgaon is setting an example for other cities and districts to follow.

Senior journalist Saikat Dutta is the brain behind the integrated command centre in Gurgaon which is coordinating the collection and distribution of thousands of cooked meals and dry ration kits every day. The day-to-day operation is being run by Manish Yadav, tehsildar, Wazirabad who is working as the commander of relief operations.

Mohit Sharma, a private citizen who used to work as the administrative head in a private company, is in charge of the volunteer-led Civil Defence Operation. Photo-journalist Mustafa Qureshi oversees sees logistics and distribution, and Kazim Rizvi, a software professional, has taken charge of data management at the backend. A young IPS officer, Chander Mohan, who holds the charge of DCP East & Traffic, is helping with the police infrastructure and Dutta himself is in charge of coordinating between all agencies and the police detachment.

With citizens being unable to contact the local administration to either seek or provide help, setting up a verifiable communication system was a key challenge. The integrated command centre brought RWAs, local volunteers, NGOs, multinational corporations, private individuals and the police on the same information platform.

“As a journalist, I have covered most major natural disasters (over the last decade and a half) from the tsunami to the Jammu and Kashmir earthquake and Kosi floods. I had become the ‘go-to disaster guy’ for my organisation. There I saw that governments and their capacities for providing relief takes a big hit. There is no coordination between the administration and civil society, and a lot of times they end up working on cross purposes. There is no involvement of the public who can identify and direct relief to those who need it the most. We have created a system where citizens feel that someone is listening to them. Where the government can be reached, on a WhatsApp group or through a DCP,” Dutta said.

What Dutta and others did was to set up a data management team which could track how much relief material was coming in and going out. The next step was to organise vehicles to respond to emergency situations; supply food and relief material and transport cooked meals from kitchens to distribution points. DCP Chander Mohan ensured that all civil volunteers got curfew passes on an urgent basis and also provided a man in uniform for every transport vehicle. The cop in the vehicle provides security and enforces social distancing at distribution points. 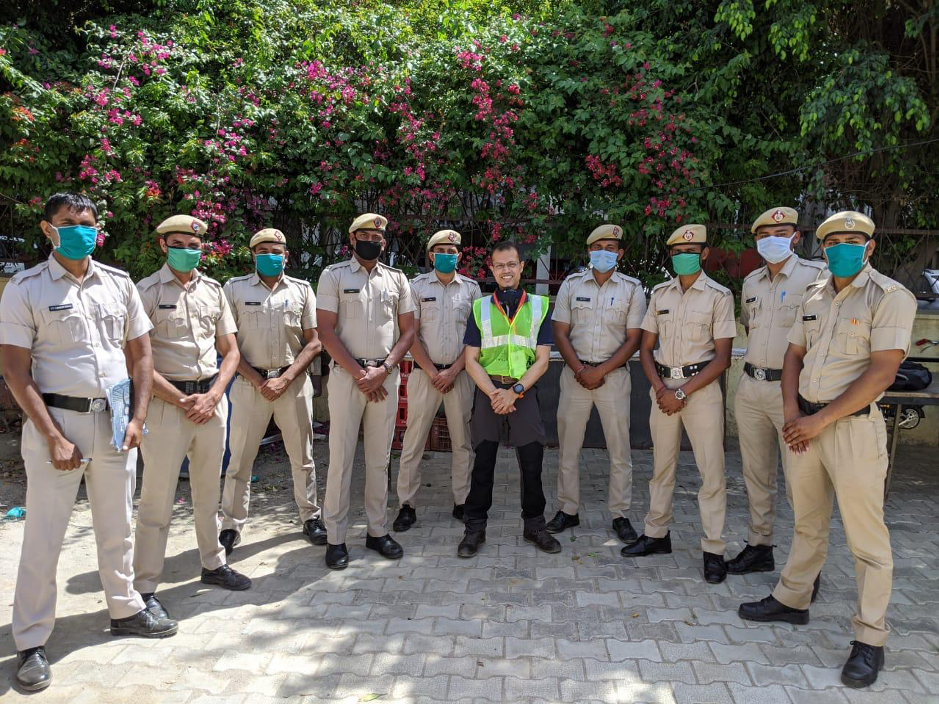 Saikat Dutta with a team of policemen who are enabling collection & distribution of cooked meals & dry rations across Gurgaon. Photo courtesy: Saikat Dutta

The team carried out a survey to identify the affected population in every zone and their needs. A dry ration kit which consists of five kg wheat flour, five kg rice, three kg pulses, three litres mustard oil, soap and sanitary napkins is given to every family which has the capacity to cook, and it is estimated that the supply will last them for 8-10 days. The area where these kits are distributed are marked off on a geo map and its requirement shows up on the system on the tenth day.

Areas that require cooked food are also marked out on the same map. For the purposes of distribution of cooked meals and dry rations, the city has been divided into four zones (Z1, Z2, Z3 & Z4) to ensure proper coverage. All the supply vehicles are marked out and identified in the motor transport pool as R1, R2, R3 etc. To avoid duplication in distribution and tracking of supply, a daily spreadsheet is prepared that shows for example: R1 & R2 are distributing cooked meals in Z1 and R3 & R4 are catering to Z2.

The vehicles follow a strict timetable. Cooked meals have to be picked up from kitchens at a designated time, reach distribution points and handed out to ensure that food is supplied during meal hours. Any delay risks the food getting spoilt and clusters going hungry. The team delivers up to 23,000 cooked meals, twice a day and 2,200 dry ration kits every day.

Also read: The Chinese Model of Corona Containment Will Strike Suifenhe Town Next

Celebrated photographer Mustafa Quraishi has been on the road distributing cooked meals and dry rations as a civil defence volunteer since March 25, the morning after the prime minister announced the 21-day lockdown. “I decided that this is a humanitarian crisis and I have to do everything I can. The media was anyway allowed press passes and I felt that it was time for us to do more than just our job as journalists. Saikat had put out a post on Facebook asking for volunteers and I replied. I went to the DCP office and offered my pick-up truck for transporting dry rations and meals. I also contacted others who had a similar pick-up truck. On the first day there were about 5-6 people who agreed. We got them curfew passes. On the first day itself we picked up four tonnes of dry ration from Badarpur and delivered it to the civil defence control room,” he said. Quraishi now spends close to 12 hours on the road every day.

He said the biggest challenge the team faces is managing the logistics of the entire operation. “The government does not want to expose more people so they have stopped issuing passes. Everyone who has been issued a curfew pass needs to be on the road. Seven pick-up trucks were issued passes but only four are currently involved in the operation. We have been driving 100-150 km a day and there is no other option. We have to do this or people will die of hunger,” Quraishi said. 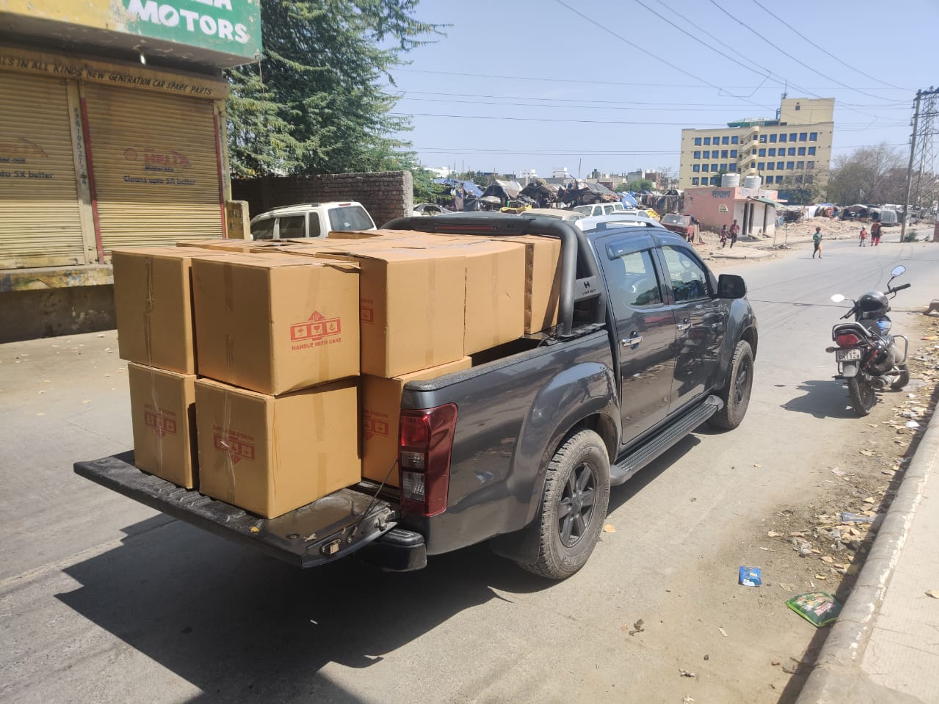 Chander Mohan, who holds the charge of DCP East & Traffic, has been helping the team with police infrastructure; identifying clusters that need food by coordinating with local police stations across the city; and ensuring that all NGOs that are distributing food are looped in to avoid double distribution. A team of 30 policemen has been assigned to manage transport, provide security and ensure enforcement of COVID-19 related guidelines.

The 2015-batch IPS officer says he was pleasantly surprised with the food collection and distribution model that had been prepared by the civil defence team. “Between March 28 and 29, as lakhs of migrant workers poured out on the streets in their bid to walk to their native villages, Gurgaon was the only city where every police station had 300-350 food packets waiting to be distributed,” he says. “Saikat had anticipated the problem much before it happened and was planning ahead instead of reacting to developments. He was 15 days ahead of the problem and we were ready for the solution when we hit the roadblock.”

There were several other issues that were personally dealt with by Mohan, like cracking down on those spreading fake news. “We were clear from the start, zero tolerance for hate messages and rumour mongering. There were a couple of incidents where FIRs were immediately registered. We did not allow communal colour of any kind from the start.” He also got in touch with a telephone service provider and set up helpline numbers that could take increased traffic (0124-4272548 ; 0124-427250) during the lockdown. 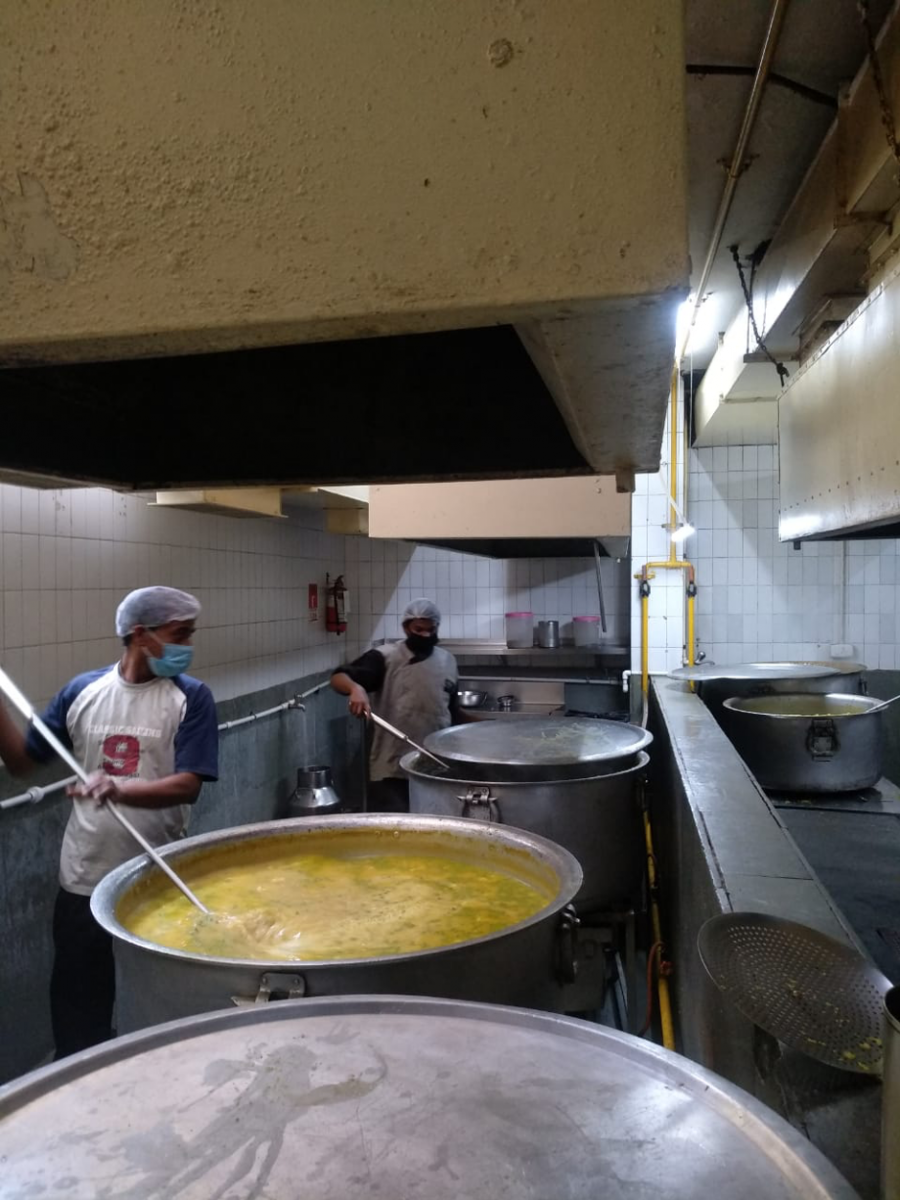 Rahul Roy’s Gurgaon Nagrik Ekta Manch (GNEM), a civil rights NGO based in Gurgaon, has been preparing close to 16,000 meals every day. The NGO has a tie-up with Prashant Kishore’s I-PAC, which provides an additional 5,000 meals, and Swiggy contributes roughly the same number. GNEM has a distribution network of its own and has also tied up with the Gurgaon Police and Civil Defence’s integrated command centre. “We send out 300-400 dry ration kits everyday, which are delivered all over Gurgaon from Manesar to Kapashera. We felt that this crisis was going to change face and fuel (LPG cylinders) was going to run out so ration might nor cover everyone. This is why we have set up a kitchen running out of Shri Ram School at Moulsary – DLF Phase 3,” Roy said.

Even as the team at GNEM works tirelessly around the clock, Roy says it’s just a drop in the ocean. According to him, the only way to check hunger and deprivation during the lockdown is opening the public distribution system to everyone and ensuring doorstep delivery of essential items.

‘There is an urgent need at this moment to universalise access to food grains, pulses, cooking oil and soap, and provide it to everyone desirous of obtaining these, irrespective of whether they have a ration card or not, because a lot of the very poor including the homeless and circular migrants in cities have no cards,” says an open appeal to the administration written by the NGO.

“The administration is not providing any rations. They are hoping that we will feed the city. They are only coordinating, taking food from various sources and distributing it. We can further scale up our operations but distribution is going to be a nightmare. No one can feed an entire population. The government must double the PDS ration for three months and provide it free of cost,” Roy said.

And it is not just NGOs that are stepping up and feeding thousands of migrant workers and daily wagers. A few corporations are pitching in too. Hero Moto Corp, that has a factory in Gurgaon, had a kitchen which used to cater to about 8,000 factory workers. The kitchen is currently preparing 4,500 meals a day free of cost and using the Integrated Command Centre to distribute them.

As COVID-19 numbers climb in India and the government leans towards extending the lockdown for another 15 days for now, millions of Indians are staring at a hungry and bleak future. We are in a place where the possibility of food riots and starvation deaths are as real as those pictures of millions marching towards their homes after the announcement of the lockdown.

The police, civil society and citizens in Gurugram have created a template that can easily be replicated across the country, with a little nudge from the administration. It will serve the government well to address issues like these instead of indulging in hate politics and cooking up a law and order crisis.

Seemi Pasha is a senior journalist.