Behind Gujarat Mine Dumpsite Cave In, a Story of Apathy, Land Loss and Constant Pollution

A 20-metre hillock caving in at Badi village is neither the beginning of indications of large geological shifts, nor the first time villagers have had to encounter uncertainty and crippling worry. But authorities are keen to brush the real issues aside.

Badi-Hoidad, Bhavnagar: Last week, when a group of men and women from the Bharwad community of Badi village in Gujarat’s Bhavnagar stepped out for routine work to herd livestock, they were greeted with a strange sight.

The 20-metre ‘hillock’ that had formed at the open-cast lignite mining dumpsite had drastically sunk in. Unsure of the reason behind the sudden change, they immediately informed villagers. In no time, word had traveled far, even drawing the attention of environment specialists and activists from outside town.

This mining dumpsite situated less than 500 metres outside Badi village settlement has been a matter of serious concern ever since the Gujarat Power Corporation Limited (GPCL) began lignite mining work here in early 2017. The power plant is run by the Power Gujarat State Electricity Corporation Limited (GSECL), which was previously known as the Bhavnagar Energy Company Ltd (BECL).

Vasudev Gohil, a 43-year-old resident of Badi village says that though the dumping site is technically situated outside the village, villagers pass the area on a daily basis. “We are constantly on tenterhooks and looking for danger signs,” he says. Their alertness is how the sudden change in the shape of the dumpsite was noticed in the first place.

For someone visiting the place for the first time, the changes may not stand out. “But we have lived all our lives here, we know every little detail of this village. And when a 150-metre-long stretch caves in by over 25-30 feet, the change can’t be overlooked,” Gohil adds.

This is not the first time that the dumpsite has worried local residents here. Last year in November, a large part of the flattened part of the dumpsite had developed deep cracks and several flat areas had suddenly got elevated. While the officials had attributed this significant elevation to the high pressure of water in the upper strata of earth in the region, environment experts had pointed to seismic activities. The change is evident even today, nearly a year since it happened.

After the recent incident, when the villagers raised an alarm and sent a written complaint to the Gujarat Pollution Control Board (GPCB), the latter, along with the district administration and the mining department, arranged for an official visit to the site. The regional officer of GPCB Bhavnagar, A.G. Oza, along with officials from the District Collectorate and the mining department visited the spot.

Oza claims the changes “aren’t worrisome” and attributes it to “high rainfall” this year. “The area received heavy rain this time. It is possible that the soil could have sunk in because of the rain,” he tells The Wire. The Board, he says, along with the mining department, is now trying to assess if the caving in had any impact on the ground surface too. “We visited the site as soon as a complaint was made. Samples have already been sent to the laboratory and we will have a clear idea only once the reports are made available,” Oza adds.

That the dumpsite had sunk in was noticeable for at least three days between October 1 and 3. Rohit Prajapati of the Paryavaran Suraksha Samiti, who had visited the site and inspected it along with his team, had intimated the GPCB and other state authorities. The letter pointed to past incidents too and sought immediate examination of the site.

“This is the third time in four years that something so strange is happening. It is a disaster in the making and the authorities ought to examine the root cause of the problem,” Prajapati says, adding that the department has repeatedly failed to show desired seriousness in the issue.

He also contests the GPCB’s claim that excess rain could lead to something so drastic. “Then why was similar impact not seen on other dumping sites in the region? One cannot arrive at conclusions for geological changes without a deeper study of them. It can have deadly implications,” he warns.

The villagers have also accused the GPCB of overlooking their complaint of water pollution which has rendered a large part of the land, most importantly, the gauchar or grazing land, useless. “In the absence of a wall or a barrier, the pollutant has freely mixed with the water bodies here and has slowly started polluting both our soil and water,” complains 23- year-old Nikul Kantharia.

He says ever since the mining project took off in the region, he, like most other villagers has been forced to take his livestock farther away to graze. “Nothing grows on the grazing land anymore and the grass closer to the dumpsite makes our cattle ill,” Kantharia claims.

Kantharia’s family, like most others from Surkha village, belong to the Koli community. The Kantharias once owned over 65 bighas of land. After most of it was acquired in 1997, they were left with just 5 bighas. “My village has over 250 houses. Almost 80% of us are either landless or have meagre land holding,” Kantharia say. 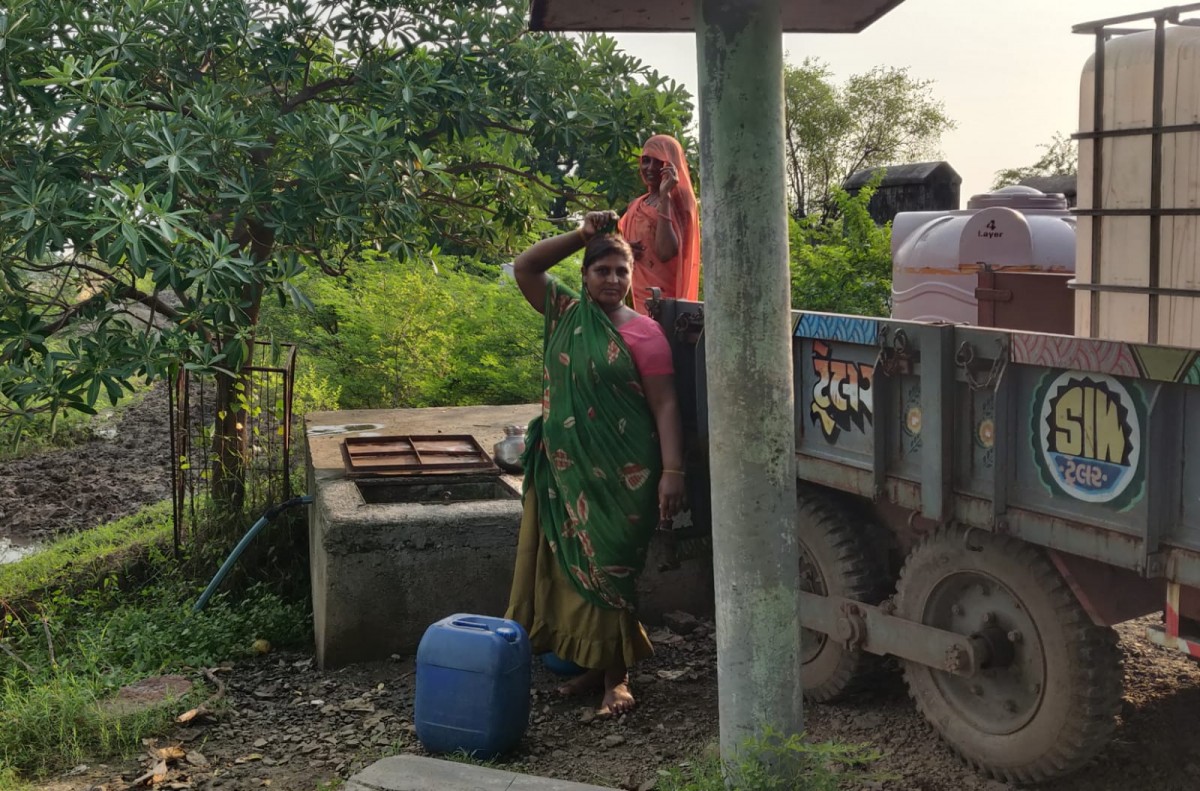 The pollution in these villages is palpable. The access roads leading to these villages are taken over by bulky trucks that transport raw material and mining waste. The trucks are uncovered and drive recklessly past the villages. The air in the region is unbreathable.

A conveyor belt meant for transportation of raw materials is still under construction. It was to have started operation in 2017.

Prajapati and Bharat Jambucha, a well-known environment activist and a proponent of organic farming from the region, both point to blatant violations of environmental laws in execution of mining work. “The GPCB had even issued a legal notice to GPCL last year after identifying over 12 violations. But nothing happened after that. Mining work has continued without any hassles,” Jambucha says. 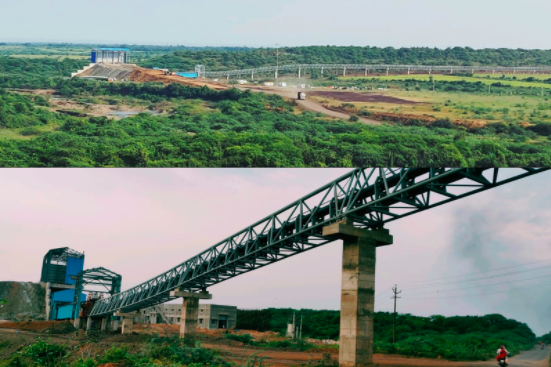 Among some glaring violations include the absence of a boundary wall around the dumping site and proper disposal of mining effluents. This, Prajapati says, clearly violates the Supreme Court judgment in the Paryavaran Suraksha Samiti & Anr vs Union Of India & Ors case.

In some villages, the groundwater level has depleted over the past few years and villagers attribute it to the mining project. Women from Surkha village travel several kilometres outside for potable water. “This is new. Until five years ago, we had some water in the village and did not have to lug water every day,” says Shilaben Kantharia.

The lignite mining project has a long history of resistance. Agricultural land, along with grazing land were acquired from the cluster of 12 adjoining villages in the coastal Ghogha taluka between 1994 and 1997. The locals estimate that villagers here lost anything between 40-100% of their land to the project. “We were paid a standard Rs 40,000 per bigha,” Narendra, a local photographer, says.

The money, Narendra says, felt decent in 1994 but for those who had been dependent on this land, the years to come proved very challenging. “Several villagers have now taken a small patch of land in the neighbouring villages on lease and are cultivating cotton and groundnut there,” Narendra says.

Bharat Jambucha says things get further complicated for the communities which were historically landless. “Most families belonging to the Dalit or Other Backward Classes in the region never owned any land. They were dependent on others’ land for work. Once villagers lost their land to the project, the landless were pushed out of the village,” he adds. His organisation, Prakrutik Kheti Juth, has been at the forefront, fighting for the rights of the villages affected in the lignite mining project.

In 2017, when the mining project finally took off, villagers from across 12 villages protested. The demonstration was disrupted after police used force and beat many protesters with lathis. More than 350 of them were booked for rioting. Several village leaders today have at least an FIR or two registered against them. “All for protecting our land rights,” Jambucha says.

The villagers, however, did not give up. Protests and hunger strikes have continued from time to time. A few villagers even sent a letter to the President of India saying they would end their lives if the government did not return their land. 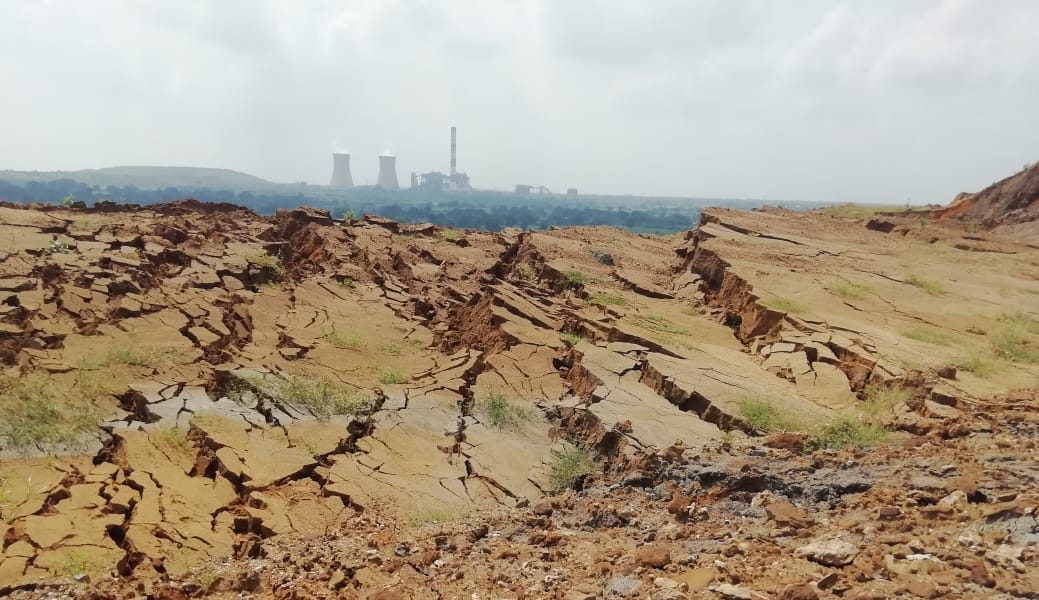 For a project that finally took off only in 2017, these villagers had to give up on their land rights way back in the 90s. Many villagers, however, continued to cultivate the land even after the acquisition. The villagers, relying on Rule 101 of the Land Acquisition, Rehabilitation and Resettlement Act, 2013, have moved a petition before the court demanding their land back.

The rule states, “When any land acquired under this Act remains unutilised for a period of five years from the date of taking over the possession, the same shall be returned to the original owner or owners or their legal heirs, as the case may be, or to the Land Bank of the appropriate government by reversion in the manner as may be prescribed by the appropriate government.”

“And we let them have our land for over 20 years,” says Gohil who lost all 37 bighas that his family had once owned.