Fifteen kilometres from the Rann Utsav, where luxury accommodations and rain dances are advertised to tourists, residents of these hamlets live without basic amenities. The water from the virda which residents drink when tankers don't reach them. Credit: Kabir Agarwal

The Wire travelled over a thousand kilometres through Kutch and North Gujarat, the two worst affected regions, and spoke to pastoralists, farmers and families struggling for fodder and water. This is the fourth in a series of articles about the drought. You can read the full series here.

Bhitara (Kutch): Dhordo, in the remote and hostile terrain of Kutch, is proudly displayed by locals as a ‘model village’ for the ‘extraordinary development’ that it has witnessed. Its claim to fame is the Rann Utsav, an annual four-month winter festival in Kutch’s iconic white desert, which it hosts.

The first edition of the Utsav, which now attracts over 2 lakh tourists each year, was organised in 2005. Narendra Modi, who was then in his first term as chief minister of Gujarat, is credited with its conception, design and execution.

Luxury tent accommodation for tourists in the middle of the desert provides much needed facilities like running water, air conditioning, heating and the luxuries of carpeted flooring, dressing room, private dining area, ‘luxury’ toiletries. Meals and beverages are provided by the Courtyard Marriot. The tent city in Dhordo also offers opportunities for paragliding, ATV bike riding, pool, archery, paint ball, a spa and sometimes even a rain dance.

Also Read: Leaving the Kutch Grasslands, in Search of Grass

Fifteen kilometres on a wobbly mud path from Dhordo are a couple of hamlets home to around a 1,000 people who lead a very different life. On April 23, when they vote, it will be for bijli (electricity), sadak (road) and pani (water).

The hamlets – Bhitara vandh and Nana Bhitara – in the Banni region north of Bhuj, have access to none. The closest road connection is about 10 kilometres away. Residents walk 7 kilometres to the nearest electricity connection to charge their phones. For water, they depend on government provided tankers and traditional shallow pits.

“Dhordo has completely transformed since the earthquake. It has facilities that even Bhuj does not have. But, our village has nothing,” said Abdul Kareem, as he walked towards a field with multiple shallow dug pits. “These are virdas. This is where we get our drinking water from.”

The virdas are a traditional system of water harvesting that has been used by Maldharis (the hamlets are comprised entirely of Kutch’s pastoral community known as Maldharis) in Kutch for centuries. A natural depression, called jheel, is identified and small wells (virdas) are dug for rain water run off to collect in them. The rain water collects in a layer above the saline groundwater. Initially, the water is sweet, but as the season progresses and the level of water in the virdas declines, the water turns brackish. 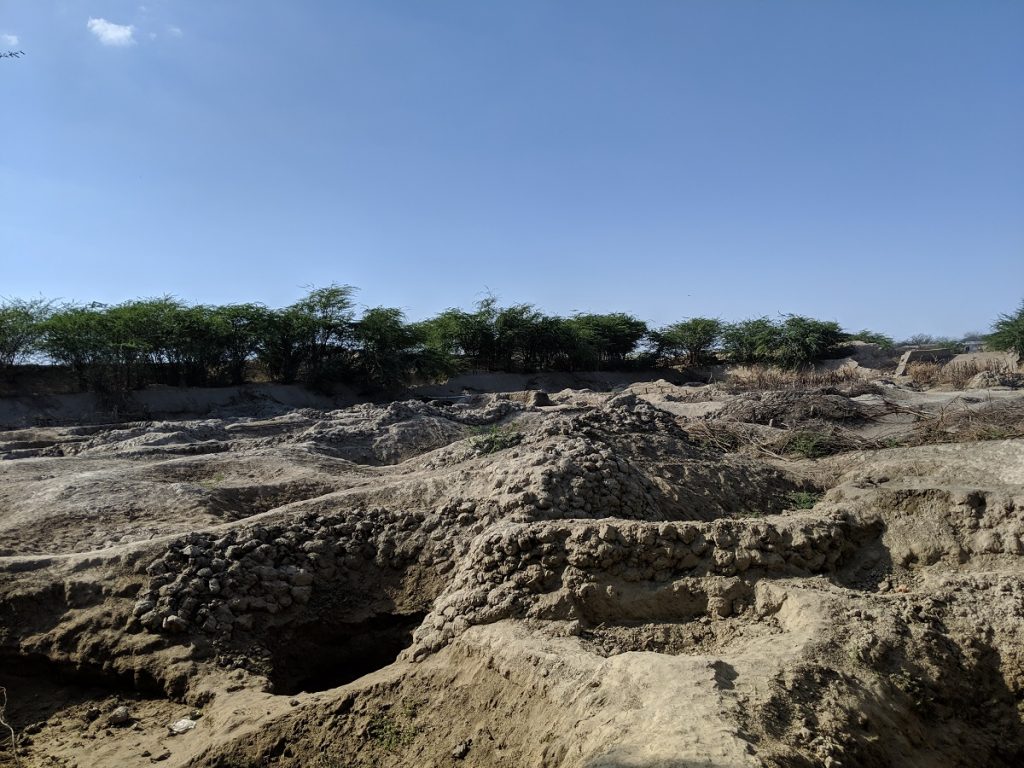 “Right now, this water is quite salty because there was very little rain,” said Kareem. As The Wire has reported earlier, Gujarat is in the middle of one of its worst droughts in over thirty years. Kutch is the worst affected district, having received only 26% of its 30-year average annual rainfall.

“It rained a little in February. That is why there is some fresh water in the virdas,” Kareem said, as he drew water with the help of his six-year-old son. The water was greenish-black in colour and salty in taste.

Since the hamlets are not connected to a water pipeline, the government supplies water through water tankers. But, the supply is erratic.

“Tanker comes once in five or six days. Sometimes even more. Sometimes the tanker gets stuck because there is no road,” said Mohammed Qasim, the sixty-year-old de facto head of Bhitara vandh. Niyaz Pathan, deputy collector of Kutch, disagreed and said water tankers are made available the same day a demand is raised.

The path through the desert that leads to the two hamlets has been shaped by vehicular movement over the years. It is narrow, bumpy, and slippery due to the ingression of salt marsh.

“Not all vehicles can get here. You need a Bolero (a four-wheel drive pick-up truck),” Qasim explained. Pathan said that most villages in Kutch are connected by roads. “Wherever there is no road, we are constructing it. Soon all villages will be connected.”

The two hamlets have one Bolero each, which is shared by all residents. “We use it to transport the milk from the village to Khavda and Dayapar, where we sell it,” said Qasim. A Bolero with milk containers to transport to Khavda. Credit: Kabir Agarwal

Khavda and Dayapar, which are both 50 kilometres away in opposite directions, are the nearest settlements of reasonable size. Dhordo, though closer, has a population of only around 500.

Residents also have to make the same journey to process raw wheat and bajra to flour. “There is no electricity here, so we can’t make flour. Sometimes, a person with a tractor aata chakki (flour mill) comes here from Dayapar. He charges Rs 20 for 10 kilograms,” Qasim said.

Several residents of the two hamlets own cellular phones and travel to Bithara, seven kilometres away, to charge them. “Aata chakki and mobile phones are the only two reasons for which we need electricity,” said Qasim.

According to Pathan, all settlements in Kutch are connected to the electricity grid. “See, it is very difficult to keep a track of vandhs. But, as far as I know, even all vandhs have electricity. There are some people who do not apply for a connection,” he said.

When pointed out that the two hamlets in question are not connected to an electricity grid, he said, “If you say so, I will get this checked and resolve the issue.”

The two hamlets, Qasim told us, were set up after the earthquake of 2001. “Our houses were destroyed. One family moved here from Bithara (the parent village). Slowly a lot of other families moved.”

Such hamlets are typical of Kutch. They are small independent settlements within revenue villages. “Families often separate from the main village and set up new hamlets,” said Pankaj Joshi, executive editor of Sahjeevan, an NGO that works with communities in Kutch. “They develop over a period of time into full-fledged settlements. They are independent of the parent village and essentially separate settlements.”

But, they don’t appear in the records of the state administration. “They are set up by nomads who are always moving and are difficult to track,” said Remya Mohan, the district collector of Kutch. According to a senior official in the district administration, there are 110 vandhs in the Banni region alone. Banni, which was once among Asia’s finest grasslands but is now significantly degraded, is an area of 2,500 square kilometres north of Bhuj. Bhitara vandh and Nana Bhitara are located in one of the remotest and most isolated regions within Banni, which is quite remote and isolated to begin with.

“Usually the vandhs are overlooked when it comes to provision of basic services like road, electricity and water,” Gazala Paul, founding director of Samerth, a charitable trust that has worked extensively on water security in Kutch, told The Wire.

Recently, Samerth conducted field surveys in Rapar block of east Kutch and found 260 vandhs. According to the Census of 2011, there are 97 revenue villages in Rapar.

Unfortunately, such data is not yet available for other blocks in Kutch. But, officials in the district administration admit – off the record – that there are several vandhs which do not have access to road, water or electricity.

Also Read: Why One Man Has to Balance Water Supply Between Six Drought-Hit Kutch Villages

“Almost all revenue villages in Kutch have road, water and electricity. But, there are several vandhs which do not. It is difficult to say exactly how many, but it is a substantial number,” said a senior official.

Remember, this data is for revenue villages and does not account for vandhs.

“The situation in vandhs is much worse,” said the official quoted above. In Bhitara vandh and Nana Bhitara, residents are not too hopeful that their fortunes are going to change any time soon. They will go and vote on April 23, but are not sure of its impact.

“Whoever comes here during elections asks us who we are going to vote for. As if our vote is going to change anything,” said Saajan Hussain, who has a family of eight.

The Kutch parliamentary constituency has been held by the BJP since 1996. The sitting MP, Vinod Chavda, is in the fray again from the reserved seat. In 2014, Chavda won comfortably against the Congress’s Dinesh Parmar with a margin of over 2.5 lakh votes.

But, residents in the two hamlets have never seen him. “Not even once has he come here. Forget about him, Narendra Modi is the Prime Minister now. He was the chief minister for 12 years. It is said that Kutch has a special place in his heart. What has he done?” said an agitated Hussain.

Mohammed Qasim agreed. “Modi has come to Dhordo so often. Even now, he comes at least once a year. But he only goes to the Rann Utsav.”

“Why will he come here? There is no road. There is no water or electricity. Dhordo has all facilities,” Abdul Kareem said, with a sheepish smile.

“Whose job is it to provide facilities here? Isn’t it Modi’s? If he doesn’t do his job, why should people vote for him” asked Qasim. 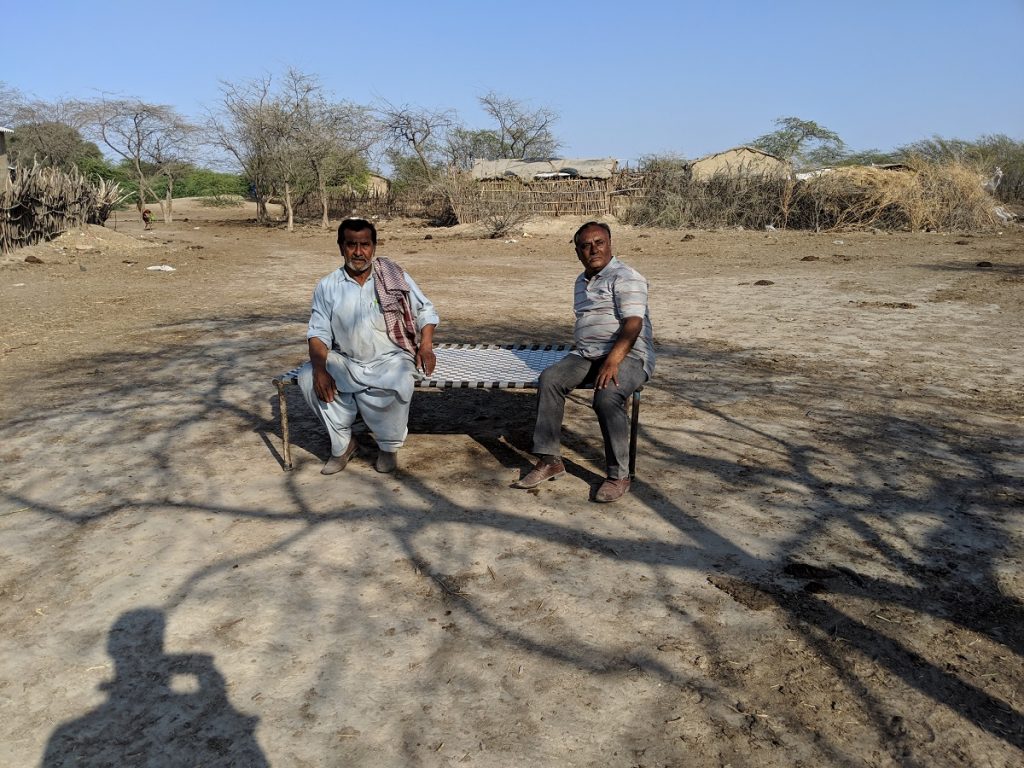 Umesh, a Bhuj based journalist, who had travelled with me, pointed out to the trio that elections are no longer contested on issues of bijli, sadak and pani. “Elections are now fought on national issues. Your problems are too local and small,” he said to a sombre response from the residents.